We study here the so called subsequence pattern matching also known as hidden pattern matching in which one searches for a given pattern w of length m as a subsequence in a random text of length n. The quantity of interest is the number of occurrences of w as a subsequence (i.e., occurring in not necessarily consecutive text locations). This problem finds many applications from intrusion detection, to trace reconstruction, to deletion channel, and to DNA-based storage systems. In all of these applications, the pattern w is of variable length. To the best of our knowledge this problem was only tackled for a fixed length m=O(1) [Flajolet, Szpankowski and Vallée, 2006]. In our main result we prove that for m=o(n^1/3) the number of subsequence occurrences is normally distributed. In addition, we show that under some constraints on the structure of w the asymptotic normality can be extended to m=o(√(n)). For a special pattern w consisting of the same symbol, we indicate that for m=o(n) the distribution of number of subsequences is either asymptotically normal or asymptotically log normal. We conjecture that this dichotomy is true for all patterns. We use Hoeffding's projection method for U-statistics to prove our findings. 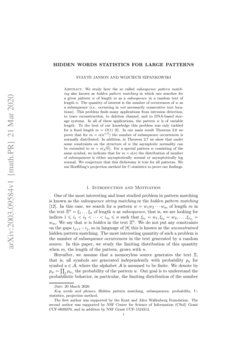 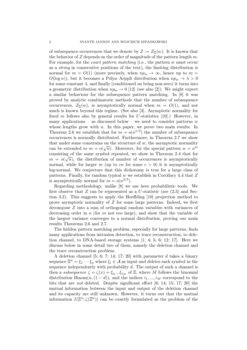 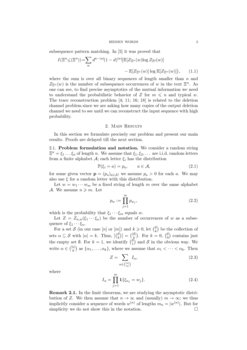 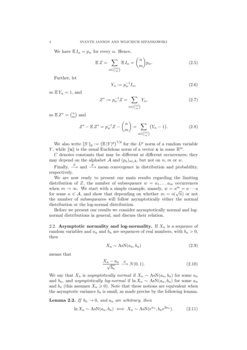 We study the distribution and the popularity of some patterns in words o...
Jean-Luc Baril, et al. ∙

We prove the equidistribution of several multistatistics over some class...
Phan Thuan Do, et al. ∙

A pattern is encountered in a word if some infix of the word is the imag...
Arnaud Carayol, et al. ∙

From the output produced by a memoryless deletion channel from a uniform...
Arash Atashpendar, et al. ∙

Most DNA sequencing technologies are based on the shotgun paradigm: many...
Aditya Narayan Ravi, et al. ∙

One of the most interesting and least studied problem in pattern matching is known as the subsequence string matching or the hidden pattern matching [12]. In this case, we search for a pattern w=w1w2⋯wm of length m in the text Ξn=ξ1…ξn of length n as subsequence, that is, we are looking for indices 1⩽i1<i2<⋯<im⩽n such that ξi1=w1,ξi2=w2,…,ξim=wm. We say that w is hidden in the text Ξn. We do not put any constraints on the gaps ij+1−ij, so in language of [8] this is known as the unconstrained hidden pattern matching. The most interesting quantity of such a problem is the number of subsequence occurrences in the text generated by a random source. In this paper, we study the limiting distribution of this quantity when m, the length of the pattern, grows with n.

Hereafter, we assume that a memoryless source generates the text Ξ, that is, all symbols are generated independently with probability pa for symbol a∈A, where the alphabet A is assumed to be finite. We denote by pw=∏jpwj the probability of the pattern w. Our goal is to understand the probabilistic behavior, in particular, the limiting distribution of the number of subsequence occurrences that we denote by Z:=ZΞ(w). It is known that the behavior of Z depends on the order of magnitude of the pattern length m. For example, for the exact pattern matching (i.e., the pattern w must occur as a string in consecutive positions of the text), the limiting distribution is normal for m=O(1) (more precisely, when npw→∞, hence up to m=O(logn)), but it becomes a Pólya–Aeppli distribution when npw→λ>0 for some constant λ

, and finally (conditioned on being non-zero) it turns into a geometric distribution when

npw→0 [12] (see also [2]). We might expect a similar behaviour for the subsequence pattern matching. In [8] it was proved by analytic combinatoric methods that the number of subsequence occurrences, ZΞ(w), is asymptotically normal when m=O(1), and not much is known beyond this regime. (See also [3]. Asymptotic normality for fixed m follows also by general results for U-statistics [10].) However, in many applications – as discussed below – we need to consider patterns w whose lengths grow with n. In this paper, we prove two main results. In Theorem 2.6 we establish that for m=o(n1/3) the number of subsequence occurrences is normally distributed. Furthermore, in Theorem 2.7 we show that under some constrains on the structure of w, the asymptotic normality can be extended to m=o(√n). Moreover, for the special pattern w=am consisting of the same symbol repeated, we show in Theorem 2.4 that for m=o(√n), the distribution of number of occurrences is asymptotically normal, while for larger m (up to cn for some c>0) it is asymptotically log-normal. We conjecture that this dichotomy is true for a large class of patterns. Finally, for random typical w we establish in Corollary 4.4 that Z is asymptotically normal for m=o(n2/5).

Regarding methodology, unlike [8] we use here probabilistic tools. We first observe that Z can be represented as a U-statistic (see (2.3) and Section 3.2). This suggests to apply the Hoeffding [10] projection method to prove asymptotic normality of Z for some large patterns. Indeed, we first decompose Z

n (for m not too large), and show that the variable of the largest variance converges to a normal distribution, proving our main results Theorems 2.6 and 2.7.

A deletion channel [5; 6; 7; 14; 17; 20] with parameter d takes a binary sequence Ξn=ξ1⋯ξn where ξi∈A as input and deletes each symbol in the sequence independently with probability d. The output of such a channel is then a subsequence ζ=ζ(x)=ξi1...ξiM of Ξ, where M

Binom(n,(1−d)), and the indices i1,...,iM correspond to the bits that are not deleted. Despite significant effort [6; 14; 15; 17; 20] the mutual information between the input and output of the deletion channel and its capacity are still unknown. However, it turns out that the mutual information I(Ξn;ζ(Ξn)) can be exactly formulated as the problem of the subsequence pattern matching. In [5] it was proved that

where the sum is over all binary sequences of length smaller than n and ZΞn(w) is the number of subsequence occurrences of w in the text Ξn. As one can see, to find precise asymptotics of the mutual information we need to understand the probabilistic behavior of Z for m⩽n and typical w. The trace reconstruction problem [4; 11; 16; 18] is related to the deletion channel problem since we are asking how many copies of the output deletion channel we need to see until we can reconstruct the input sequence with high probability.

In this section we formulate precisely our problem and present our main results. Proofs are delayed till the next section.

We consider a random string Ξn=ξ1…ξn of length n. We assume that ξ1,ξ2,… are i.i.d. random letters from a finite alphabet A; each letter ξi has the distribution

for some given vector

p=(pa)a∈A; we assume pa>0 for each a. We may also use ξ for a random letter with this distribution.

Let w=w1⋯wm be a fixed string of length m over the same alphabet A. We assume n⩾m. Let

which is the probability that ξ1⋯ξm equals w.

Let Z=Zn,w(ξ1⋯ξn) be the number of occurrences of w as a subsequence of ξ1⋯ξn.

In the limit theorems, we are studying the asymptotic distribution of Z. We then assume that n→∞ and (usually) m→∞; we thus implicitly consider a sequence of words w(n) of lengths mn=|w(n)|. But for simplicity we do not show this in the notation. ∎

We have EIα=pw for every α. Hence,

We also write ∥Y∥p:=(E|Y|p)1/p for the Lp norm of a random variable Y, while ∥x∥ is the usual Euclidean norm of a vector x in some Rm.

C denotes constants that may be different at different occurrences; they may depend on the alphabet A and (pa)a∈A, but not on n, m or w.

We are now ready to present our main results regarding the limiting distribution of Z, the number of subsequence w=a1,…am occurrences when m→∞. We start with a simple example, namely, w=am=a⋯a for some a∈A, and show that depending on whether m=o(√n)

Before we present our results we consider asymptotically normal and log-normal distributions in general, and discuss their relation.

If Xn is a sequence of random variables and an and bn are sequences of real numbers, with bn>0, then

If bn→0, and an are arbitrary, then

The converse is proved by the same argument. ∎

In this case (and only in this case), Xn thus converges in distribution, after scaling, to a log-normal distribution. If bn→∞, then no linear scaling of Xn can converge in distribution to a non-degenerate limit, as is easily seen. ∎

We consider first a simple example where the asymptotic distribution can be found easily by explicit calculations. Fix a∈A and let w=am=a⋯a, a string with m identical letters. Then, if N=Na is the number of occurrences of a in ξ1⋯ξn, then

We will show that Z is asymptotically normal if m is small, and log-normal for larger m.

. Then, by the Central Limit Theorem,

where Γ(x) is the Euler gamma function. We fix a sequence ωn→∞ such that npa−m≫ωn≫n1/2; this is possible by the assumption. Note that (2.19) implies that Y/ωnp⟶0, and thus P(|Y|⩽ωn)→1. We may thus in the sequel assume |Y|⩽ωn. We assume also that n is so large that npa−m⩾2ωn>0.

Stirling’s formula implies, by taking the logarithm and differentiating twice (in the complex half-plane Rez>12, say)

We now present our main results. However, first we discuss the road map of our approach. First, we observe that the representation (2.3) shows that Z can be viewed as a U-statistic. For convenience, we consider Z∗ in (2.7), which differs from Z by a constant factor only, and show in (3.18) that Z∗−EZ∗ can be decomposed into a sum ∑mℓ=1Vℓ of orthogonal random variables Vℓ such that, when m is not too large, Var(∑mℓ=2Vℓ)=o(VarV1). Next, in Lemma 3.7 we prove that V1 appropriately normalized converges to the standard normal distribution. This will allow us to conclude the asymptotic normality of Z.

In this paper, we only consider the region m=o(n1/2). First, for m=o(n1/3) we claim that the number of subsequence occurrences always is asymptotically normal.

In the second main result, we restrict the patterns w to such that are not typical for the random text; however, we will allow m=o(n1/2).

In this section we will prove our main results. We start with some preliminaries.

Thus, letting ξ be any random variable with the distribution of ξi,

Let φa and B be as above.

The representation (2.3) shows that Z is a special case of a U-statistic. (Recall that, in general, a U-statistic is a sum over subsets α as in (2.3) of f(ξα1,…,ξαk) for some function f.) For fixed m, the general theory of Hoeffding [10] applies and yields asymptotic normality. (Cf. [13, Section 4] for a related problem.) For m→∞ (our main interest), we can still use the orthogonal decomposition of [10], which in our case takes the following form.

By multiplying out this product, we obtain

Consequently, combining the terms in (3.12) with the same αγ,

Note also that by the combinatorial definition of c(β,γ) given before (3.14), we see that

). In order to do this, we estimate variances.

This leads to the following estimates.

and thus, summing a geometric series,

For later use, we define also

is a (shifted) hypergeometric distribution:

which we write as

Note that V1,i is a function of ξi, and thus the random variables V1,i are independent. Furthermore, (3.2) implies EV1,i=0. Let