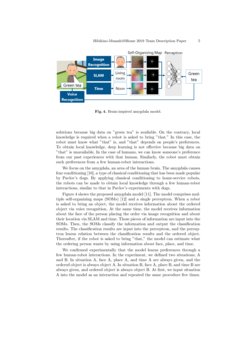 Our team, Hibikino-Musashi@Home (HMA) was founded in 2010 and it has been competing in the RoboCup@Home Japan Open competition open platform league (OPL) annually since then. Our team is developing a home-service robot, and we intend to demonstrate our robot in this event to present our research outcomes.

This paper describes the technologies used by us. Especially, this paper outlines an object recognition system that uses deep learning

[hinton2006fast], speech recognition system, sound localization system, and a brain-inspired amygdala model, which was originally proposed by us and is installed in our HSR.

Figure 1 presents an overview of our HSR system. We has used an HSR since 2016. In this section, we will introduce the specifications of our HSR.

We participated in RoboCup 2018 Montreal with the HSR. The computational resources built into the HSR were inadequate to support our intelligent systems and were unable to extract the maximum performance from the system. To overcome this limitation, using an Official Standard Laptop for DSPL that can fulfill the computational requirements of our intelligent systems has been permitted since RoboCup 2018 Montreal. One of our team members (Yutaro ISHIDA) contributed a rule definition of the Official Standard Laptop for DSPL discussed in GitHub [github366, github368]. We use an ALIENWARE (Intel Core i7-8700K CPU, 32GB RAM and GTX-1080 GPU) as the Official Standard Laptop for DSPL. Consequently, the computer equipped inside the HSR could be used to run basic HSR software, such as its sensor drivers and motion planning and actuator drivers. This increased the operational stability of the HSR.

In this section, we introduce the software installed in our HSR. Figure 1 shows the system installed in our HSR. The system is based on the Robot Operating System [ros]. In the our HSR system, the laptop computer and a cloud service, only if a network connection is available, are used for system processing. The laptop is connected to a computer through an Hsrb interface. The built-in computer specializes in low-layer systems, such as the HSR’s sensor drivers, motion planning, and actuator drivers, as shown in Fig. 1 (c)(d).

In this section, we explain the object recognition system (shown in Fig, 1 (a)), which is based on you look only once (YOLO) [redmon2016you].

We propose an autonomous annotation system for YOLO using chroma keys. Figure 2 shows an overview of the proposed system.

In the system, two RGB-D cameras are used, and they are identical to the camera implemented on the HSR. These cameras differ in terms of mounting positions and angles: one of the cameras captures an object from a higher position than the other camera. Since two different mounting positions and angles are used, two different images of a given object are captured simultaneously. Using these images for training, YOLO can recognize objects captured from high and low positions. The objects captured by the cameras are placed on a turntable. We capture 200 images of a given object by one camera as the table turns. Thus, we obtain 400 images per object.

To adapt to various lightning conditions, we apply an automatic color equation algorithm [RIZZI20031663] to the captured images (Fig. 3 (a)). We use a python library [colorcorrect] to this end. Then, we remove image backgrounds using chroma keys (Fig. 3 (b)).

Image generation requires  30 min (in parallel using six CPU cores), and training of YOLO requires approximately six hours when using the GTX1080 GPU on the Standard Laptop. Even though the generated training data are artificial, recognition of YOLO in actual environments works.

The voice recognition/sound source localization system (shown in Fig. 1 (b)) operates as follows:

In this section, we explain the brain-inspired amygdala model that learns preferences through human-robot interactions.

Figure 5 shows the results of our experiments.

Table 1 shows the results achieved by our team in the recent competitions. We participated in RoboCup and World Robot Challenge for several years, and as a result, our team has won prizes and academic awards.

Especially, we participated in the RoboCup 2018 Montreal using the system described herein. We scored 335 points out of 2125 points. These points were 62 % of the points scored by the top OPL team. We were able to demonstrate the performance of HSR and our technologies. Especially, we won the Procter & Gamble Dishwasher Challenge Award in RoboCup 2018 owing to the object recognition and manipulation used by YOLO. Thanks to these results, we were awarded the first prize in the competition.

The source codes of our systems and our original dataset are published on GitHub. The URL is as follows: https://github.com/hibikino-musashi-athome

For our robot we are using the following software: