Some mixtures, such as colloids like milk, blood, and gelatin, have homogeneous appearance when viewed with the naked eye, however, to observe them at the nanoscale is possible to understand the heterogeneity of its components. The same phenomenon can occur in pattern recognition in which it is possible to see heterogeneous patterns in texture images. However, current methods of texture analysis can not adequately describe such heterogeneous patterns. Common methods used by researchers analyse the image information in a global way, taking all its features in an integrated manner. Furthermore, multi-scale analysis verifies the patterns at different scales, but still preserving the homogeneous analysis. On the other hand various methods use textons to represent the texture, breaking texture down into its smallest unit. To tackle this problem, we propose a method to identify texture patterns not small as textons at distinct scales enhancing the separability among different types of texture. We find sub patterns of texture according to the scale and then group similar patterns for a more refined analysis. Tests were performed in four static texture databases and one dynamic one. Results show that our method provides better classification rate compared with conventional approaches both in static and in dynamic texture. 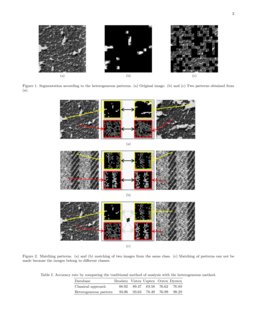 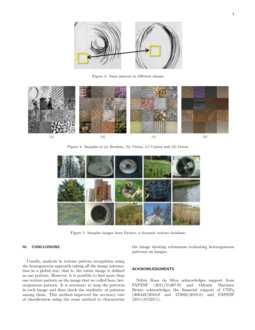 Since now, many approaches has been proposed for surface defect detectio...
Shervan Fekri-Ershad, et al. ∙

Texture analysis and classification are some of the problems which have ...
Shervan Fekri-Ershad, et al. ∙

This paper aims to improve the accuracy of texture classification based ...
Omar Al-Kadi, et al. ∙

In this paper we present a novel filter, based on the existing COSFIRE f...
Nicola Strisciuglio, et al. ∙

Pattern recognition is the identification and interpretation of patterns in images, in order to extract relevant information on the image to identify and classify your content. Classification of patterns can be used in a variety of applications in different fields such as nanotechnology

One side in the pattern classification approach uses multi-scale analysis of patterns, that is, different scales of observation are used to perform the analysis and find similar patterns, because important structures in an image usually occur at different spatial scales Koenderink (1984) Witkin (1983). Methods based on textons Julesz (1981); Leung and Malik (1999) represent each pixel of a texture as the convolution of a multi-scale and multi-orientation filter bank producing a texton vocabulary. Thus, these methods of texture analysis characterize the image homogeneously on the scale to be analyzed. Both the overall analysis, such as multi-scale approach is appropriate for the vast majority of problems in pattern recognition. However, in some problems, due to the heterogeneous nature of the composition of the objects under consideration, it is needed one more step in the process of pattern recognition, the analysis of heterogeneous patterns.

This paper is organized as follows: Section II describes the heterogeneous pattern analysis. Section III shows the results and discussions and in Section IV the conclusions.

This new view to analyze the various patterns requires a new approach for analysis of similarity between images. The first step is to segment the texture by defining regions where the image belong to a given pattern while defining the patterns in the image. Figures

1 and 1 illustrate the segmentation of the image of Figure 1 in two patterns.

To obtain this result the image was divided into smaller sized windows of 8 × 8 pixels, for windows with texture sufficiently homogeneous, that is, where only one pattern is found. Furthermore, there was obtained a characteristic to represent each window. Windows with similar characteristics remain the same pattern, and those with distinct characteristics were separated into different patterns. Figures 1 and 1 show the windows stayed grouped using k-means algorithm according to their pattern with the remaining windows in each pattern. Textural features from Haralick Haralick et al. (1973) descriptors were used to characterize each window.

Haralick descriptors Haralick et al. (1973) are based on the spatial gray level dependence matrices, or co-occurrence matrix. Contrast, Correlation, Energy and Homogeneity were computed from resulting co-occurrence matrices to obtain a set of 32 descriptors for each window. Let G be the gray levels and p(i,j) a matrix of relative frequencies of two neighboring resolution cell with intensity i and j separated by distance d and direction θ. Extracted features are described as follows:

are, respectively, means and standard deviations of the sum of elements of each row and column of the co-occurrence matrix. Distances of 1 and 2 pixels with angles of

After the windows were divided into patterns, we performed a survival analysis of windows, 25% of the windows with features farthest from the group average were discarded making the representation of pattern more consistent. Each pattern was characterized by a feature vector average that is the average of the characteristics of all windows belonging to the pattern. The next step is to find the best matching among the patterns to define the image similarity as Figures

2 and 2 exemplify. They show two examples where it has an optimal matching among the image patterns of the same class. When the best fit among all the patterns in each image is found, we have the degree of similarity, defining whether the images belong to the same class. Figure 2 shows an example where it is not possible to perform the fitting patterns and all possibilities of fitting are tested. In this case the images belong to different classes.

However, this approach has a special feature when the same pattern can be found in different classes of texture (See Figure 3). This one influences the analysis of the similarity degree between classes, because different classes can obtain a high rate of similarity, since some patterns will have great matching.

The method used as classical approach was Haralick descriptors with the same configurations of characterization of windows. This way we can compare the same descriptor but with different perspectives. One of the most important parameters is the window size that directly interferes in the results. Large windows remain with the general representation of the image, preserving the homogeneous analysis of patterns. However, becomes more homogeneous window, or small windows, the classification rate increases, as the representative pattern of the window increases. For this experiment two patterns were analyzed in each image. Table 1 shows the results obtained when using the conventional method in comparison with heterogeneous patterns, in all cases heterogeneous pattern method improved the classification rate proving to be better than the standard approach in which only one pattern is established for the entire image.

Usually, analysis in texture pattern recognition using the homogeneous approach taking all the image information in a global way, that is, the entire image is defined as one pattern. However, it is possible to find more than one texture pattern on the image that we called here, heterogeneous pattern. It is necessary to map the patterns in each image and then check the similarity of patterns among them. This method improved the accuracy rate of classification using the same method to characterize the image showing robustness evaluating heterogeneous patterns on images.