The Graph Convolutional Networks (GCN) has demonstrated superior performance in representing graph data, especially homogeneous graphs. However, the real-world graph data is usually heterogeneous and evolves with time, e.g., Facebook and DBLP, which has seldom been studied. To cope with this issue, we propose a novel approach named temporal heterogeneous graph convolutional network (THGCN). THGCN first embeds both spatial information and node attribute information together. Then, it captures short-term evolutionary patterns from the aggregations of embedded graph signals through compression network. Meanwhile, the long-term evolutionary patterns of heterogeneous graph data are also modeled via a TCN temporal convolutional network. To the best of our knowledge, this is the first attempt to model temporal heterogeneous graph data with a focus on community discovery task. 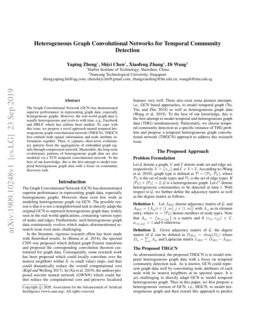 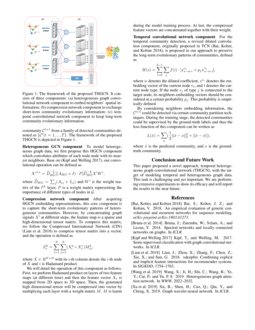 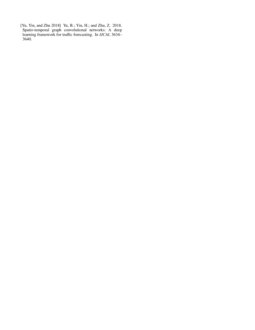 In the literature, rigorous research effort has been made with flourished results. In [2]

, the spectral CNN was proposed which defined graph Fourier transform and proposed the corresponding convolution theorem customized for graph data. Consequently, some research work has been proposed which could locally convolute over the nearest neighbors within

K (a small value) steps, and thus could dramatically reduce the overall computational cost [3]. In [6], the authors proposed wavelet neutral network (GWNN) which could further reduce the computational cost and preserve localized features very well. There also exist some pioneer attempts, i.e., GCN based approaches, to model temporal graph [7] as well as heterogeneous graph data [5]. To the best of our knowledge, this is the first attempt to model temporal and heterogeneous graph data (THG) simultaneously. Particularly, we choose temporal community detection as a specific instance of THG problem and propose a temporal heterogeneous graph convolutional network (THGCN) approach to address this research issue.

Let G denote a graph, V and E denote node set and edge set, respectively. V={vij} and E∈V×V. According to [5], graph type is defined as P=(PV,PE), where PV is the set of node types and PE is the set of edge types. If |PV|+|PE|>2, G is a heterogeneous graph. Let Ct denote heterogeneous communities to be detected at time t. With respect to G, we further define the adjacency matrix as well as the degree matrix as follows.

Given adjacency matrix of G, the degree matrix of G can be defined as DHG=diag(Dii) where Dii=∑jAij and Laplacian matrix LHG=DHG−AHG.

To model heterogeneous graph data, we first propose this HGCN component which convolutes attributes of each node node with its nearest neighbors. Base on [3], our convolutional operation can be defined as

where ˆDHG=∑j(Aij+Iij) and Wi is the weight matrix of the lth layer, P is a weight matrix representing the importance of different types of nodes in G.

After acquiring HGCN embedding representations, this core component is to capture the short-term evolutionary patterns of heterogeneous communities. However, by concatenating graph signals X′

at different steps, the feature map is a sparse and high-dimensional tensor matrix. To compress this matrix, we follow the Compressed International Network (CIN)

to compress tensor matrix into a vector, and the operation is defined as

where X∈RN×D with its i-th column denote the i-th node of X and ∘ is Hadamard product.

We will detail the operation of this component as follows. First, we perform Hadamard product on layers of two feature maps (at different time) and then the feature vector Xe is mapped from 2D space to 3D space. Then, the generated high dimensional tensor will be compressed into vector by multiplying each layer with a weight matrix M. M is learnt during the model training process. At last, the compressed feature vectors are concatenated together with their weight.

For the temporal community detection, a revised dilated convolution component, originally proposed in TCN [1], is proposed in our approach to preserve the long-term evolutionary patterns of communities, defined as

is connected to the target node, its neighbors embedding vectors should be considered at a certain probability

pj. This probability is empirically defined.

could be detected via certain community partition techniques. During the training stage, the detected communities could be supervised by the ground-truth labels and thus the loss function of this component can be written as

where ^x is the predicted community, and x is the ground-truth community.

This paper proposed a novel approach, temporal heterogeneous graph convolutional network (THGCN), with the target of modeling temporal and heterogeneous graph data. This task is challenging and yet important. We are performing extensive experiments to show its efficacy and will report the results in the near future.