We propose a novel approach to address the Simultaneous Detection and Segmentation problem. Using hierarchical structures we use an efficient and accurate procedure that exploits the hierarchy feature information using Locality Sensitive Hashing. We build on recent work that utilizes convolutional neural networks to detect bounding boxes in an image (Faster R-CNN) and then use the top similar hierarchical region that best fits each bounding box after hashing, we call this approach HashBox. We then refine our final segmentation results by automatic hierarchy pruning. HashBox introduces a train-free alternative to Hypercolumns. We conduct extensive experiments on Pascal VOC 2012 segmentation dataset, showing that HashBox gives competitive state-of-the-art object segmentations. 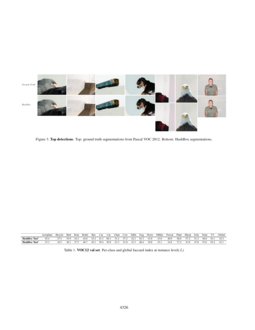 Detection and Segmentation are key components in any computer vision toolbox. In this paper we present a hashing technique to segment an object given its bounding box and therefore attain both Detection and Segmentation simultaneously. At its heart lies a novel way to retrieve and generate a high quality segmentation, which is crucial for a wide variety of computer vision applications. Simply put, we use a state-of-the-art convolutional network to detect the objects, but a hashing technique build on top a high quality hierarchy of regions to generate the segmentations.

Object Detection and Segmentation are two popular problems in Computer Vision, historically treated as separated tasks. We consider these strongly related vision tasks as a unique one: detecting each object in an image and assigning to each pixel a binary label inside the corresponding bounding box.

CZ Segmentation addresses the problem with a surprising different technique that deviates from the current norm of using proposal object candidates [5]. In semantic segmentation the need for rich information models that entangle some kind of notion from the different parts that constitute an object is exacerbated. To alleviate this issue we build on the use of a the hierarchical model in [2] and explore the rich space of information of the Ultrametric Contour Map in order to find the best possible semantic segmentation of the given object. For this task, we exploit bounding boxes to facilitate the search task. Hence, we simply hash the bounding box patches and retrieve closest nearest neighbors to the given objects, obtaining superior instance segmentations. Using this simple but effective technique we get the segmentation mask which is then refined using Hierarchical Section Pruning.

We start from a bounding box detector and refine the object support, as in Hariharan et al. in Hypercolumns [4]. We propose here a train-free similarity hashing alternative to their approach.

We present a simple yet effective module that leverages the need for a training step and can provide segmentations after any given detector. Our approach is to use a state-of-the-art region-based CNN detector [3] as prior step to guide the segmentation process.

. We conclude with the evaluation metrics in Section

4 and a brief discussion in Section 5.

We start with a primer. CZ Segmentation consists on the following main blocks:

This work is inspired on how humans segment images: they first localize the objects they want to segment, they carefully inspect the object on the image by the use of their visual system and finally they choose the region that belongs to the body of that particular object. We believe that although the problem of detection has to be solved by the use of deep learning techniques based on convolutional neural networks, the problem of segmenting those objects is of a different nature and can be best understood by the use of hashing.

Our main contributions are presented as follows:

To our knowledge, we are the first to provide a segmentation solution based on a hashing technique. This approach leverages the need to optimize over a high dimensional space.

Despite the success of region proposal methods in detection, they have in turn arisen as the main computational bottleneck of these approaches. Yet unlike the latter, hierarchical structures derived from the UCM are in comparison inexpensive to compute and store. While we continue to use a very fast region-based convolutional neural network (R-CNN) to solve the detection task, we propose to solve the segmentation problem by exploring efficiently the space generated by a hierarchical image representation.

Recent works [1], [8] present Object Detection and Segmentation as a single problem. The SDS task requires to detect and segment every instance of a category in the image. Our work is however more closely related to the Hypercolumns approach in [4], where they go from bounding boxes to segmented masks. Our approach is related in the sense that we propose an alternative that does not require a training step and can be used as an off-the-shelf high quality segmenter.

[14]. Our segmenter starts rather than from raw pixels, Long et al. [15], or bounding box proposals as in Girshick et al. [16] and Hariharan et al. [1] , from a set of hierarchical regions given by the UCM structure. Other techniques rely on a superpixel representation e.g. Mostajabi et al. [17]. This is a distinct tactic that works directly on a different representation.

We delve into the details of the CZ Segmentation construction, Figure 1.

We begin by using the R-CNN object detector proposed by Ren et al. in [3], which is in turn based on [10]

. It introduces a Region Proposal Network (RPN) for the task of generating detection proposals and then solves the detection task by the use of a FAST R-CNN detector. They train a CNN on ImageNet Classification and fine-tune the network on the VOC detection set. For our experiments, we use the network trained on VOC 2007 and 2012, and evaluate the results on the VOC 2012 evaluation set. We use the very deep VGG-16 model

We consider the hierarchical image representation described in [5]. Considering a segmentation of an image into regions that partition its domain S={Si}i. A segmentation hierarchy is a family of partitions {S∗,S1,…,SL} such that: (1) S∗ is the finest set of superpixels, (2) SL is the complete domain, and (3) regions from coarse levels are unions of regions from fine levels.

In this paper we introduce a novel segmentation algorithm that exploits current bounding box information to automatically select the best hierarchical region that segments the image. We introduce Hierarchical Section Hashing (HSH) which is in turn based on Locality-Sensitive Hashing (LSH). This algorithm helps us surpass the problem of computational complexity of the k-nearest neighbor rule and allows us to do a fast approximate neighbor search in the hierarchical structure of [2].

HSH can be summarized as follows:

CZ Segmentation has two main steps: first ’train’ the HSH map with all the hierarchical regions of the image. Then ’test’ the HSH map with all the detected bounding boxes to retrieve the approximate nearest neighbors that segment each of the objects in the image. The novelty of this approach is that it provides the best hierarchical region provided by the UCM structure that segments the object image. CZ exploits bounding box object detection because it relies on the correct detection of the object detector.

The final piece is to refine the segmentations given by the HSH map by using what we call Hierarchical Section Pruning (HSP).

HSP procedure can be summarized as follows:

HSH and HSP Visual Examples can be seen in Figure 2.

Our goal is to retrieve the k

-nearest neighbors of a given hierarchy vector, which we call

. In this setup we are limited by the curse of dimensionality and therefore using an exact search is inefficient. Our approach uses an approximate nearest neighbor technique: Locality Sensitive Hashing (LSH).

A Locality Sensitive Hash function maps x→h(x) such that the similarity between (x,y) is preserved as

which is not possible for all D(x,y) but available for instance for euclidean metrics.

We build on the LSH work of [6]. LSH is a randomized hashing scheme, investigated with the primary goal of ϵ−R neighbor search. Its main constitutional block is a family of locality sensitive functions. We can define H of functions h:X→{0,1} is a (p1,p2,r,R)-sensitive if, for any x,y∈X,

where these probabilities are chosen from a random choice of

Algorithm 1 gives a simple description of the LSH algorithm for the given case when the distance of interest is L1, which is the one in use in CZ Segmentation. The family H in this case contains axis-parallel stumps, which means the value of an h∈H is generated by taking a simple dimension d∈{1,…,dim(X)} and thresholding it with some T:

That is, we can understand that an example in our hierarchical partition Si∈S provides a k-bit hash key

This process is repeated l times and produces l independently constructed hash functions g1,…,gl. The available reference (’training’) data S are indexed by each one of the l hash functions, producing l hash tables, i.e. each of the Si hierarchical partitions generated by all the corresponding parents of the hierarchical tree structure.

Once the LSH data structure has been built it can be used to perform a very efficient search for approximate neighbors in the following way. When a query S0 arrives, we compute its key for each hash table j, and record the examples C={Sl1,…,Slnl} resulting from the lookup with that key. In other words, we find the ’training’ examples that fell in the same bucket of the l-th hash table to which S0 would fall. These l lookup operations produce a set of candidate matches, C=∪lj=1Cj. If this set is empty, the algorithm reports it and stops. Otherwise, the distances between candidate matches and S0 are explicitly evaluated, and the examples that match the search criteria, which means that are closer to S0 than (1+ϵ)R, are returned.

We extensively evaluate CZ Segmentation on VOC 2012 validation set. Top detections from our algorithm can be seen in Figure 3.

In Table 1 we show the results of the JACCARD Index Metric. This measure represents the average best overlap achieved by a candidate for a ground truth object.

In this paper we introduce CZ Segmentation, an instance segmentation algorithm based on a hashing technique that exploits bounding box object detection. We show CZ achieves compelling results and generates off-the-shelf accurate segmentations.