Harnessing the Vulnerability of Latent Layers in Adversarially Trained Models 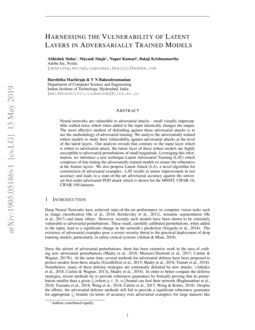 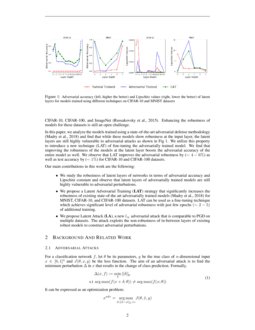 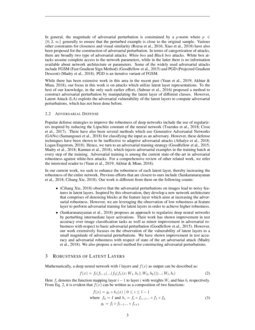 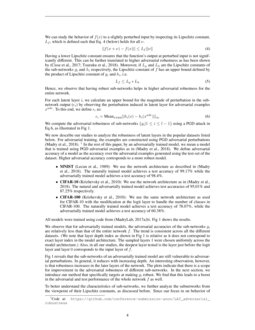 [He et al.2016, Krizhevsky et al.2012]. However, recently it has been shown to be extremely vulnerable to adversarial perturbations. These small, carefully calibrated perturbations when added to the input lead to a significant change in the network’s prediction [Szegedy et al.2014]

. The existence of adversarial examples pose a severe security threat to the practical deployment of deep learning models, particularly, in safety-critical systems

Despite the efforts, the adversarial defense methods still fail to provide a significant robustness guarantee for appropriate lp bounds (in terms of accuracy over adversarial examples) for large datasets like CIFAR-10, CIFAR-100, ImageNet[Russakovsky et al.2015]. Enhancing the robustness of models for these datasets is still an open challenge.

Our main contributions in this paper are the following:

The rest of the paper is structured as follows: In Section 2, we review various adversarial attack and defense methodologies. In Section 3 and 4.1, we analyze the vulnerability of latent layers in robust models and introduce our proposed training technique of Latent Adversarial Training (LAT). In Section 4.2 we describe our adversarial attack algorithm Latent Attack (LA). Further, we do some ablation studies to understand the effect of the choice of the layer on LAT and LA attack in Section 5.

For a classification network f, let θ be its parameters, y be the true class of n - dimensional input x∈[0,1]n and J(θ,x,y)

be the loss function. The aim of an adversarial attack is to find the minimum perturbation

Δ in x that results in the change of class prediction. Formally,

It can be expressed as an optimization problem as:

In general, the magnitude of adversarial perturbation is constrained by a p norm where p∈{0,2,∞}

to ensure that the perturbed example is close to the original sample. Various other constraints for closeness and visual similarity

where xi+1 denotes the perturbed sample at (i+1)th iteration.

Popular defense strategies to improve the robustness of deep networks include the use of regularizers inspired by reducing the Lipschitz constant of the neural network [Tsuzuku et al.2018, Cisse et al.2017]. There have also been several methods which turn to GAN’s[Samangouei et al.2018]

for classifying the input as an adversary. However, these defense techniques were shown to be ineffective to adaptive adversarial attacks

In our current work, we try to enhance the robustness of each latent layer, and hence increasing the robustness of the network as a whole. Previous works in this area include [Sankaranarayanan et al.2018, Cihang Xie2019]. However, our paper is different from them on the following counts:

Mathematically, a deep neural network with l layers and f(x) as output can be described as:

Here fi denotes the function mapping layer i−1 to layer i with weights Wi and bias bi respectively. From Eq. 3, it is evident that f(x) can be written as a composition of two functions:

We can study the behavior of f(x) at a slightly perturbed input by inspecting its Lipschitz constant, which is defined by a constant Lf such that Eq. 5 holds for all ν.

So having robust sub-networks can result in higher adversarial robustness for the whole network f. But the converse need not be true.

Using this we compute the adversarial robustness of sub-networks {gi|1≤i≤l−1} using PGD attack as shown in Fig 1.

We now, briefly describe the network architecture used for each dataset. 111Code avaiable at: https://github.com/msingh27/LAT_adversarial_robustness

We observe that for adversarially trained models, the adversarial accuracies of the sub-networks gi are relatively less than that of the whole network f as shown in Fig 1 and 3. The trend is consistent across all the different datasets. Note that layer depth, i.e. i is relative in all the experiments and the sampled layers are distributed evenly across the model. Also, in all tests the deepest layer tested is the layer just before the logit layer. Layer 0 corresponds to the input layer of f.

Fig 1 and 3 reveal that the sub-networks of an adversarially trained model are still vulnerable to adversarial perturbations. In general, it reduces with increasing depth. Though, a peculiar trend to observe is the increased robustness in the later layers of the network. The plots indicate that there is a scope of improvement in the adversarial robustness of different sub-networks. In the next section, we introduce our method that specifically targets at making gi robust. We find that this leads to a boost in the adversarial and test performance of the whole network f as well.

where Bϵ(xi) denotes the ϵ neighbourhood of xi. For computational reasons, inspired by [Alvarez-Melis and Jaakkola2018], we approximate Bϵ(xi) by adding noise to xi with epsilon as given in Eq. 7. We report the value averaged over complete test data for different datasets and models in Fig. 2. The plot reveals that while for the adversarially trained model, the Lipschitz value of f is lower than that of the naturally trained model, there is no such pattern in the sub-networks gi. This observation again reinforces our hypothesis of the vulnerabilities of the different sub-networks against small perturbations.

In this section, we seek to increase the robustness of the deep neural network, f. We propose Latent Adversarial training (LAT) wherein both f and one of the sub-networks gi are adversarially trained. For adversarial training of gi, we use a l∞ bounded adversarial perturbation computed via the PGD attack at layer i with appropriate bound as defined in Eq. 7.

We are using LAT as a fine-tuning technique which operates on a adversarially trained model to improve its adversarial and test accuracy further. We observe that performing only a few epochs (

∼5) of LAT on the adversarially trained model results in a significant improvement over adversarial accuracy of the model. Algorithm 1 describes our LAT training technique.

To test the efficacy of LAT, we perform experiments over CIFAR-10, CIFAR-100, SVHN, Rest. Imagenet and MNIST datasets. For fairness, we also compare our approach (LAT) against two baseline fine-tuning techniques.

Table 1 reports the adversarial accuracy corresponding to LAT and baseline fine-tuning methods over the different datatsets. PGD Baseline corresponds to 10 steps for CIFAR-10, CIFAR-100 and SVHN, 40 steps for MNIST and 8 steps of PGD attack for Restricted Imagenet. We perform 2 epochs of fine-tuning for MNIST, CIFAR-10, Rest. Imagenet, 1 epoch for SVHN and 5 epochs for CIFAR-100 using the different techniques. The results are calculated with the constraint on the maximum amount of per-pixel perturbation as 0.3/1.0 for MNIST dataset and 8.0/255.0 for CIFAR-10, CIFAR-100, Restricted ImageNet and SVHN.

The results in the Table 1 correspond to the best performing layers 222The results correspond to g11, g10, g7, g7 and g2 sub-networks for the CIFAR-10, SVHN, CIFAR-100, Rest. Imagenet and MNIST datasets respectively.. As can be seen from the table, that only after 2 epochs of training by LAT on CIFAR-10 dataset, the adversarial accuracy jumps by ∼6.5%. Importantly, LAT not only improves the performance of the model over the adversarial examples but also over the clean test samples, which is reflected by an improvement of 0.6% in test accuracy. A similar trend is visible for SVHN and CIFAR-100 datasets where LAT improves the adversarial accuracy by 8% and 4% respectively, as well as the test accuracy for CIFAR-100 by 0.6% . Table 1 also reveals that the two baseline methods do not lead to any significant changes in the performance of the model. As the adversarial accuracy of the adversarially trained model for the MNIST dataset is already high (93.75%), our approach does not lead to significant improvements (∼0.46%).

In this section, we seek to leverage the vulnerability of latent layers of a neural network to construct adversarial perturbations. In general, existing adversarial perturbation calculation methods like FGSM [Goodfellow et al.2015] and PGD [Madry et al.2018] operate by directly perturbing the input layer to optimize the objective that promotes misclassification. In our approach, for given input example x and a sub-network gi(x), we first calculate adversarial perturbation Δ(x,gi) constrained by appropriate bounds where i∈(1,2,..,l). Here,

Subsequently, we optimize the following equation to obtain Δ(x,f) for LA :

We repeat the above two optimization steps iteratively to obtain our adversarial perturbation.

Some of the adversarial examples generated using LA is illustrated in Fig 5. The pseudo code of the proposed algorithm(LA)is given in Algo 2.

To gain an understanding of LAT, we perform various experiments and analyze the findings in this section. We choose CIFAR-10 as the primary dataset for all the following experiments.

Effect of layer depth in LAT.

We fix the value of ω to the best performing value of 0.2 and fine-tune the model using LAT for different latent layers of the network. The left plot in Fig 4 shows the influence of the layer depth in the performance of the model. It can be observed from the plot, that the robustness of f increases with increasing layer depth, but the trend reverses for the later layers. This observation can be explained from the plot in Fig 1, where the robustness of gi decreases with increasing layer depth i, except for the last few layers.

Effect of hyperparameter ω in LAT.

We fix the layer depth to 11(g11) as it was the best performing layer for CIFAR-10 and we perform LAT for different values of ω. This hyperparameter ω controls the ratio of weight assigned to the classification loss corresponding to adversarial examples for g11 and the classification loss corresponding to adversarial examples for f. The right plot in Fig 4 shows the result of this experiment. We find that the robustness of f increases with increasing ω. However, the adversarial accuracy does start to saturate after a certain value. The performance of test accuracy also starts to suffer beyond this point.

We test the black box and white-box adversarial robustness of LAT fine-tuned model for the CIFAR-10 dataset over various ϵ values. For evaluation in black box setting, we perform transfer attack from a secret adversarially trained model, bandit black box attack[Ilyas et al.2019] and SPSA[Uesato et al.2018]. Figure 7 shows the adversarial accuracy. As it can be seen, the LAT trained model achieves higher adversarial robustness for both the black box and white-box attacks over a range of ϵ values when compared against baseline AT model. We also observe that the adversarial perturbations transfers better(∼1%) from LAT model than AT models.

Performance of LAT with training steps.

Figure 6 plots the variation of test and adversarial accuracy while fine-tuning using the LAT and AT techniques.

Previous experiments of LAT fine-tuning corresponds to selecting a single sub-network gi and adversarially training it. We perform an experiment where at each training step of LAT we randomly choose one of the [g5, g7, g9, g11] sub-networks to perform adversarial training. The model performs comparably, achieving a test and adversarial accuracy of 87.31% and 53.50% respectively.

We observe that deep neural network models trained via adversarial training have sub-networks vulnerable to adversarial perturbation. We described a latent adversarial training (LAT) technique aimed at improving the adversarial robustness of the sub-networks. We verified that using LAT significantly improved the adversarial robustness of the overall model for several different datasets along with an increment in test accuracy. We performed several experiments to analyze the effect of depth on LAT and showed higher robustness to Black-Box attacks. We proposed Latent Attack (LA) an adversarial attack algorithm that exploits the adversarial vulnerability of latent layer to construct adversarial examples. Our results show that the proposed methods that harness the effectiveness of latent layers in a neural network beat state-of-the-art in defense methods, and offer a significant pathway for new developments in adversarial machine learning.