In this paper, we study groups of automorphisms of algebraic systems over a set of p-adic integers with different sets of arithmetic and coordinate-wise logical operations and congruence relations modulo p^k, k> 1. The main result of this paper is the description of groups of automorphisms of p-adic integers with one or two arithmetic or coordinate-wise logical operations on p-adic integers. To describe groups of automorphisms, we use the apparatus of the p-adic analysis and p-adic dynamical systems. The motive for the study of groups of automorphism of algebraic systems over p-adic integers is the question of the existence of a fully homomorphic encryption in a given family of ciphers. The relationship between these problems is based on the possibility of constructing a "continuous" p-adic model for some families of ciphers (in this context, these ciphers can be considered as "discrete" systems). As a consequence, we can apply the "continuous" methods of p-adic analysis to solve the "discrete" problem of the existence of fully homomorphic ciphers. 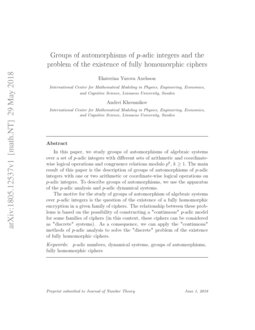 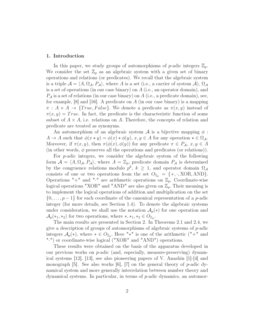 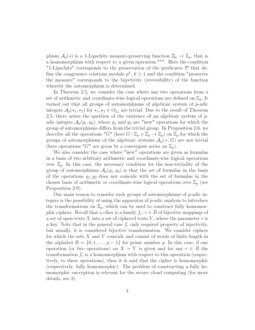 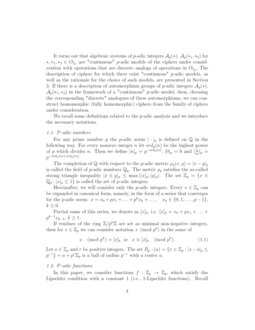 . In fact, the predicate is the characteristic function of some subset of

A×A, i.e. relations on A. Therefore, the concepts of relation and predicate are treated as synonyms.

An automorphism of an algebraic system A is a bijective mapping ϕ:A→A such that ϕ(x⋆y)=ϕ(x)⋆ϕ(y), x,y∈A for any operation ⋆∈ΩA. Moreover, if π(x,y), then π(ϕ(x),ϕ(y)) for any predicate π∈PA, x,y∈A (in other words, ϕ preserves all the operations and predicates (or relations)).

For p-adic integers, we consider the algebraic system of the following form A=⟨A,ΩA,PA⟩, where A=Zp, predicate domain PA is determined by the congruence relations modulo pk, k≥1, and operator domain ΩA consists of one or two operations from the set OZp={+,⋅,XOR,AND}. Operations "+" and "⋅" are arithmetic operations on Zp. Coordinate-wise logical operations "XOR" and "AND" are also given on Zp. Their meaning is to implement the logical operations of addition and multiplication on the set {0,…,p−1} for each coordinate of the canonical representation of a p-adic integer (for more details, see Section 1.4). To denote the algebraic systems under consideration, we shall use the notation Ap(∗) for one operation and Ap(∗1,∗2) for two operations, where ∗,∗1,∗2∈OZp.

The main results are presented in Section 2. In Theorems 2.1 and 2.4, we give a description of groups of automorphisms of algebraic systems of p-adic integers Ap(∗), where ∗∈OZp. Here "∗" is one of the arithmetic ("+" and "⋅") or coordinate-wise logical ("XOR" and "AND") operations.

These results were obtained on the basis of the apparatus developed in our previous works on p-adic (and, especially, measure-preserving) dynamical systems MeraJNT , SOL , see also pioneering papers of V. Anashin Tfunc -An_avt_1 and monograph ANKH . See also works V00 , V1 on the general theory of p-adic dynamical system and more generally interrelation between number theory and dynamical systems. In particular, in terms of p-adic dynamics, an automorphism Ap(∗) is a 1-Lipschitz measure-preserving function Zp→Zp, that is a homomorphism with respect to a given operation "*". Here the condition "1-Lipschitz" corresponds to the preservation of the predicates P that define the congruence relations modulo pk, k≥1 and the condition "preserves the measure" corresponds to the bijectivity (reversibility) of the function whereby the automorphism is determined.

Our main reason to consider such groups of automorphisms of p-adic integers is the possibility of using the apparatus of p-adic analysis to introduce the transformations on Zp, which can be used to construct fully homomorphic ciphers. Recall that a ciher is a family fr, r∈R of bijective mappings of a set of open texts X into a set of ciphered texts Y, where the parameter r is a key. Note that in the general case fr only required property of injectivity, but usually, it is considered bijective transformation. We consider ciphers for which the sets X and Y coincide and consist of words of finite length in the alphabet B={0,1,…,p−1} for prime number p. In this case, if one operation (or two operations) on X=Y is given and for any r∈R the transformation fr is a homomorphism with respect to this operation (respectively, to these operations), then it is said that the cipher is homomorphic (respectively, fully homomorphic). The problem of constructing a fully homomorphic encryption is relevant for the secure cloud computing (for more details, see 3).

It turns out that algebraic systems of p-adic integers Ap(∗), Ap(∗1,∗2) for ∗,∗1,∗2∈OZp are "continuous" p-adic models of the ciphers under consideration with operations that are discrete analogs of operations in OZp. The description of ciphers for which there exist "continuous" p-adic models, as well as the rationale for the choice of such models, are presented in Section 3. If there is a description of automorphism groups of p-adic integers Ap(∗), Ap(∗1,∗2) in the framework of a "continuous" p-adic model, then, choosing the corresponding "discrete" analogues of these automorphisms, we can construct homomorphic (fully homomorphic) ciphers from the family of ciphers under consideration.

We recall some definitions related to the p-adic analysis and we introduce the necessary notations.

For any prime number p the p-adic norm |⋅|p is defined on Q in the following way. For every nonzero integer n let ordp(n) be the highest power of p which divides n. Then we define |n|p=p−ordp(n), |0|p=0 and |nm|p=p−ordp(n)+ordp(m).

The completion of Q with respect to the p-adic metric ρp(x,y)=|x−y|p is called the field of p-adic numbers Qp. The metric ρp satisfies the so-called strong triangle inequality |x±y|p≤max(|x|p;|y|p). The set Zp={x∈Qp:|x|p≤1} is called the set of p-adic integers.

If residues of the ring Z/pkZ are set as minimal non-negative integers, then for x∈Zp we can consider notation x(modpk) in the sense of

For all k≥1 a 1-Lipschitz transformation f:Zp→Zp of the reduced mapping modulo pk is

A mapping fk−1 is well defined (i.e. the fk−1 does not depend on the choice of representative in the ball z+pkZp). We use the notation fk−1≡f(modpk) taking into account (1.1).

for all x∈Zp. Here the characteristic function χ(m,x) is given by χ(m,x)=1 if |x−m|p≤p−n and χ(m,x)=0 otherwise, where n=0 if m=0, and n is uniquely defined by the inequality pn−1≤m≤pn−1 otherwise (see Schikhof’s book Schikhof for a detailed presentation of the theory of the van der Put series).

In this section we describe a coordinate representation of p-adic functions, see, for example, YuRecent .

Any map f:Zp→Zp can be represented in the form:

Taking into account notation (1.1) for k≥0, we consider the following functions of p-valued logic

Then any 1-Lipschitz function f:Zp→Zp can be represented as

Thus, we can rewrite the 1-Lipschitz function f:Zp→Zp as

We call the relation (1.7) the sub-coordinate representation of a 1-Lipschitz function f, see Subcoord_Hensel and Subcoord_Hensel_1 . Functions φk,a, φ0 can be considered as a function of p-valued logic and as a transformation of the ring Z/pZ.

We consider a p-adic autonomous dynamical system ⟨Zp,μp,f⟩, for more details see, for example, Tfunc -V1 , as well as Jeong . The space Zp

is equipped with a natural probability measure

Criteria of measure-preserving for 1-Lipschitz functions are presented in the following theorems.

A 1-Lipschitz function f:Zp→Zp represented by the van der Put series (1.4) preserves the measure if and only if

We remind that an automorphism of the algebraic system ⟨A,ΩA,PA⟩ is a bijective mapping f:A→A such that

Hereinafter, we consider the algebraic system ⟨A,ΩA,PA⟩, for which the carrier is a set of p-adic integers, namely, A=Zp.

The set of all automorphisms of an algebraic system with respect to the operation of a composition of automorphisms forms a group which in our notation will be written in the form AutAp(∗) (and AutAp(∗1,∗2) in the case of two operations). We denote an identity element of the group of automorphisms by e.

2 Groups of automorphisms of p-adic integers

In this section we give a description of the groups of automorphisms of the following algebraic systems:

As shown in Theorem 2.5, all groups of automorphisms AutAp(∗1,∗2), where ∗1,∗2∈OZp are trivial groups (i.e., groups that have only one element). In this regard, in the section 2.3 we consider the question of the existence of algebraic systems of the form ⟨Zp,g1,g2,P⟩, where g1,g2 are some "new" operations, for which the group of automorphisms differs from the identity.

We use the apparatus developed in our previous works on p-adic dynamical systems, see, for example, MeraJNT and SOL , to describe the groups of automorphisms of p-adic integers.

This possibility is explained by the following circumstances:

In terms of dynamical systems, the problem of describing automorphisms of p-adic integers reduces to describing the measure-preserving 1-Lipschitz functions, which preserve the operations of the considered algebraic system.

2.1 Groups of automorphisms on Zp with one operation

In this section, we describe the groups of automorphisms of algebraic systems AutAp(∗) for each operation from the set OZp.

As we have already noted (see Section 1.4) elements of AutAp(+) (or AutAp(⋅), correspondingly) are 1-Lipschitz functions f:Zp→Zp (the condition of preserving the congruence relations modulo pk, k≥1). To prove this Theorem, we describe all 1-Lipschitz functions, which define a homomorphism with respect to the considered operation, and then, using the results for measure-preserving functions, we find the functions that are bijective on Zp. As a result, we obtain a description of the elements of the groups AutAp(+) and AutAp(⋅).

Let f defines a homomorphism with respect to multiplication on Zp. Let f be distinct from the identity function. In particular, f(0)=0. Indeed, if this is not so, then from f(0⋅a)=f(0)f(a)=f(0) follows f(a)=1 for any a∈Zp. In addition, we assume that there exists a∈Zp such that f(a)≠0 (i.e. f is a non-zero function).

We write each non-zero p-adic number with the aid of the Teichmüller representation (see, for example, p. 81 in Schikhof ), namely in the following form:

Thus, the function f, which defines a homomorphism with respect to multiplication on Zp, can be represented in the form (taking into account the representation from the relation (2.2)):

Thus, the function f can be represented in the form

Performing the corresponding calculations, we see that the function of this type defines a homomorphism on Zp with respect to multiplication.

If in (2.1) we set a=n, s=n, A=pn−1 for some n∈N, then f(x)=xn. That is, all such polynomials define a homomorphism with respect to multiplication on Zp. Functions of the form f(x)=xn for n>1 do not preserve the measure.