Group-sparse SVD Models and Their Applications in Biological Data

Sparse Singular Value Decomposition (SVD) models have been proposed for biclustering high dimensional gene expression data to identify block patterns with similar expressions. However, these models do not take into account prior group effects upon variable selection. To this end, we first propose group-sparse SVD models with group Lasso (GL1-SVD) and group L0-norm penalty (GL0-SVD) for non-overlapping group structure of variables. However, such group-sparse SVD models limit their applicability in some problems with overlapping structure. Thus, we also propose two group-sparse SVD models with overlapping group Lasso (OGL1-SVD) and overlapping group L0-norm penalty (OGL0-SVD). We first adopt an alternating iterative strategy to solve GL1-SVD based on a block coordinate descent method, and GL0-SVD based on a projection method. The key of solving OGL1-SVD is a proximal operator with overlapping group Lasso penalty. We employ an alternating direction method of multipliers (ADMM) to solve the proximal operator. Similarly, we develop an approximate method to solve OGL0-SVD. Applications of these methods and comparison with competing ones using simulated data demonstrate their effectiveness. Extensive applications of them onto several real gene expression data with gene prior group knowledge identify some biologically interpretable gene modules. 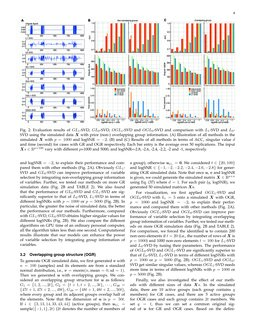 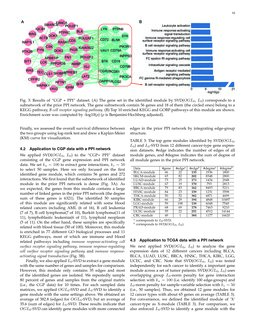 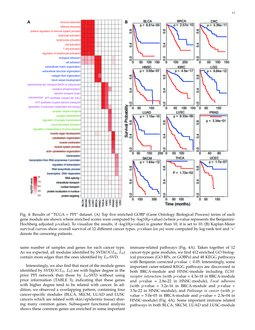 Singular Value Decomposition (SVD) is one of the classical matrix decomposition models [1]. It is a useful tool for data analysis and low-dimensional data representation in many different fields such as signal processing, matrix approximation and bioinformatics [2, 3, 4]

. However, the non-sparse singular vectors with all variables are difficult to be explained intuitively. In the recent years, sparse models have been widely applied in computational biology to improve biological interpretation

[5, 6, 7]. In addition, many researchers applied diverse sparse penalties onto singular vectors in SVD and developed multiple sparse SVD models to improve their interpretation and capture inherent structures and patterns from the input data [8, 9]. For example, sparse SVD provides a new way for exploring bicluster patterns of gene expression data. Suppose X∈Rp×n denotes a gene expression matrix with p genes and n samples. Biologically, a subset of patients and genes can be clustered together as a coherent bicluster or block pattern with similar expressions. Previous studies have reported that such a bicluster among gene expression data can be identified by low-rank sparse SVD models [10, 11, 12]

. However, these sparse models ignore prior information of gene variables, and usually assume that each gene is selected in a bicluster with equal probability. Actually, one gene may belong to multiple pathways in biology

[13]. As far as we know, there is not yet a model for biclustering gene expression data by integrating gene pathway information. Group sparse penalties [14, 15] should be used to induce the structured sparsity of variables for variable selection. Several studies have explored the (overlapping) group Lasso in regression tasks [16, 17]

To solve these models, we design an alternating iterative algorithm to solve GL1-SVD based on a block coordinate descent method and GL0-SVD based on a projection method. Furthermore, we develop a more general approach based on Alternating Direction Method of Multipliers (ADMM) to solve OGL1-SVD. In addition, we extend OGL1-SVD to OGL0-SVD, which is a regularized SVD with overlapping grouped L0-norm penalty. The key of solving OGL1-SVD is also a proximal operator with overlapping group L0-norm penalty. We propose a greedy method to solve it and obtain its approximate solution. Finally, applications of these methods and comparison with the state-of-the-art ones using a set of simulated data demonstrate their effectiveness and computational efficiency. Extensive applications of them onto the high-dimensional gene expression data show that our methods could identify more biologically relevant gene modules, and improve their biological interpretations.

where X∈Rp×n with p features and n samples, U∈Rp×r, V∈Rr×n and D is diagonal matrix. Ui (Vi) corresponds to the i-th column of U (V

), which is a column orthogonal matrix. To solve the above optimization problem, we introduce a general regularized rank-one SVD model:

are two hyperparameters. In a Bayesian view, different prior distribution functions of

u and v correspond to different regularized functions. For example, L1-norm is a very popular sparsity-inducing norm [18] and has been used to obtain sparse solutions in a large number of statistical models including the regression model [18, 19], SVD [20], PCA [21], LDA [22]

) have been widely used in many regression models for feature selection by integrating group information of variables. However, it is a challenging issue to use these generalized penalty functions such as group Lasso and overlapping group Lasso

[15, 25] in the SVD framework with effective algorithms. To this end, we develop several group-sparse SVD models with different group-sparse penalties including ΩGL1(u), ΩGL0(u), ΩOGL1(u) and ΩOGL0(u) to integrate diverse group structures of variables for pattern discovery in biological data (see TABLE 1).

Below we will introduce these models and their algorithms in detail.

where both wl and τm are adaptive weight parameters. Suppose wl=√pl and τm=√qm for group sizes, the penalty reduces to a traditional group Lasso.

Based on the definition of GL1 penalty, we propose the first group-sparse SVD with group Lasso penalty (GL1-SVD), also namely SVD(GL1, GL1):

Since ||X−duvT||2F=∥X∥2F+d2−2duTXv. Minimizing ||X−duvT||2F is equivalent to minimizing −uTXv, and once the u and v are determined, the d value is determined by uTXv. We obtain the Lagrangian form of GL1-SVD model as follows:

where λ1≥0, λ2≥0, η1≥0 and η2≥0 are Lagrange multipliers. To solve the problem (5), we apply an alternating iterative algorithm to optimize u for a fixed v and vice versa.

Since Eq. (6) is strictly convex and separable, the block coordinate descent algorithm must converge to its optimal solution [27]. Finally, we can choose an η to guarantee u=u∥u∥2 (normalizing condition).

Furthermore, to meet the normalizing condition, we chose an η to guarantee v=v∥v∥2. Besides, if here each group only contains one element, then the group Lasso penalty reduces to the Lasso penalty. Accordingly, we get another update formula:

Based on Eqs. (9) and (10), we propose an alternating iterative algorithm (Algorithm 1) to solve the GL1-SVD model and its time complexity is O(Tnp+Tp2+Tn2), where T is the number of iterations. We can control the iteration by monitoring the change of d.

Unlike GL1 penalty, below we consider a group L0-norm penalty (GL0) of u and v as follows:

Based on the above definition of GL0 penalty, we propose the second group-sparse SVD model with GL0 penalty, namely GL0-SVD or SVD(GL0, GL0):

Here, we employ an alternating iterative strategy to solve problem (13). Fix u (or v), the problem (13) reduces to a projection problem with group L0-norm penalty.

The objective function of (14) can be simplified as −zuTu=∑Ll=1−z(l)uTu(l). Theorem 1 shows that solving problem (14) is equivalent to forcing the elements in L−ku groups of zu with the smallest group-norm values to be zeros. We can easily prove that Theorem 1 is true. Here we omit the prove process.

In the same manner, fix u and let zv=XTu, thus problem (13) can be written as a similar subproblem with respect to v:

Similarly, based on Theorem 1, we can obtain the estimator of

Finally, we propose an alternating iterative method (Algorithm 2) to solve the optimization problem (13). The time complexity of Algorithm 2 is O(Tnp+Tn2+Tp2), where T is the number of iterations.

Note that once the number of elements of every group equals 1 (i.e., qi=1 for i=1,2,⋯,M), the group L0-norm penalty reduces to L0-norm penalty. Moreover, Algorithm 2 with a small modification can be used to solve SVD(GL0, L0), which applies L0-norm as the penalty for the right singular vector v. In addition, compared to adaptive group lasso [26], we may consider a weighted (adaptive) group L0-penalty. We rewrite ϕ(zu)=[w1∥z(1)∥,⋯,wL∥z(L)∥]T in Eq. (15), where wi is a weight coefficient to balance different group-size and it is defined by wi=1/√qi, and qi is the number of elements in group i.

where supp(⋅) denotes the index set of non-zero elements for a given vector.

OGL1 is a specific penalty function for structured sparsity. It can lead to the sparse solution, whose supports are unions of predefined overlapping groups of variables. Based on the definition of OGL1, we propose the third group-sparse SVD model as follows:

where cu and cv are two hyperparameters. We first introduce two latent vectors ~u and ~v. Let ~u(l)=uGl,l=1,⋯,L and set ~u=(~u(1),⋯,~u(L)), which is a column vector with size of ∑Ll=1|Gl|. Similarly, we can get ~v based on v. In addition, we can extend the rows and columns of X of p×n to obtain a new matrix ~X with size of ∑Ll=1|Gl|×∑Mm=1|Gm|, whose row and column variables are non-overlapping. Thus, solving the problem (18) is approximately equivalent to solving a SVD(GL1, GL1) for non-overlapping ~X. We can obtain an approximate solution of (18) by using Algorithm 1. However, if a variable belongs to many different groups, it leads to a large computational burden. For example, given a protein-protein interaction (PPI) network, which contains about 13,000 genes and 250,000 edges. If we consider each edge of the PPI network as a group, then we would construct a high-dimensional matrix ~X, which contains 500,0000 rows.

To address this issue, we develop a method based on alternating direction method of multipliers (ADMM) [33, 34] to directly solve problem (18). Similar with Eq. (5), we first redefine problem (18) with its Lagrange form:

where z=Xv. Since the overlapping Lasso penalty is a convex function [36]. We can apply ADMM [33, 34] to solve the above problem (20). To obtain the learning algorithm of (20), we first introduce an auxiliary y and redefine the above problem as follows:

So the augmented Lagrangian of (21) can be written as follows:

where “∙” performs element-by-element multiplication. Thus, we can obtain the update rule for u and ensure it is a unit vector:

Based on ADMM [34], we also obtain the update rule for θ as follows:

In summary, based on the ADMM algorithm (Algorithm 3), we adopt an alternating iterative strategy (Algorithm 4) to solve SVD(OGL1,OGL1). In Algorithm 4, the operation x=z∘1T denotes if group l∈T, then xGl=zGl, and the remaining elements of x are zero.

Here we define an overlapping group L0-norm penalty (OGL0) of u as follows:

where supp(⋅) denotes the index set of non-zero elements for a given vector.

Based on the definition of OGL0, we propose the fourth group-sparse SVD model with overlapping group L0-norm penalty (OGL0-SVD) as follows:

Similarly, we solve the above problem by using an alternating iterative method. Fix u (or v), we transform the original optimization problem into a projection problem with overlapping group L0-norm penalty.

Fix v in problem (29) and let z=Xv, thus the problem can be written into a projection problem with overlapping group L0-norm penalty:

The above problem contains overlapping group-sparse induced penalty with L0-norm. Thus, it is difficult to solve the exact solution of problem (31). To this end, we use an approximate method, which replaces zTu by using ∑lzTGluGl. Since y(l)=uGl in problem (31), we have ∑lzTGluGl=∑lzTGly(l). Thus, problem (31) approximately reduces to the below problem,

Since y contains a non-overlapping structure, we can easily get the optimal solution of the above problem on u and y. To sum up, we obtain an approximate solution of (30) as Theorem 2 suggests.

The approximate solution of (30) is ˆPOGL0(z<spa