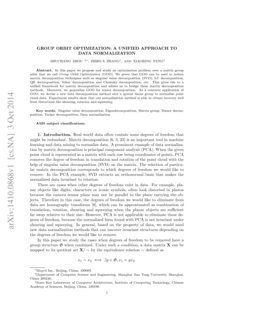 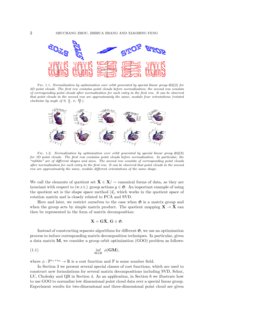 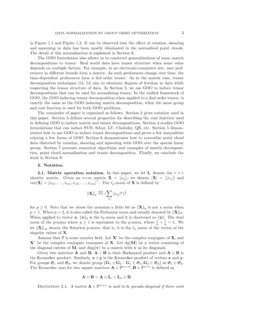 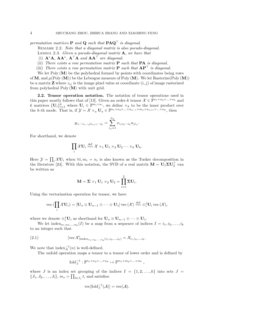 In this paper we propose novel methods for compression and recovery of m...
Zemin Zhang, et al. ∙

The success of matrix factorizations such as the singular value decompos...
Alan Edelman, et al. ∙

This work is devoted to elaboration on the idea to use block term decomp...
Pavel Kharyuk, et al. ∙

Real world data often contain some degrees of freedom that might be redundant. Matrix decomposition

is an important tool in machine learning and data mining to normalize data. A prominent example of data normalization by matrix decomposition is principal component analysis (PCA). When the given point cloud is represented as a matrix with each row being coordinates of points, PCA removes the degree of freedom in translation and rotation of the point cloud with the help of singular value decomposition (SVD) on the matrix. The selection of particular matrix decomposition corresponds to which degrees of freedom we would like to remove. In the PCA example, SVD extracts an orthonormal basis that makes the normalized data invariant to rotation.

There are cases when other degrees of freedom exist in data. For example, planar objects like digits, characters or iconic symbols, often look distorted in photos because the camera sensor plane may not be parallel to the plane carrying the objects. Therefore in this case, the degrees of freedom we would like to eliminate from data are homography transforms [8], which can be approximated as combination of translation, rotation, shearing and squeezing when the planar objects are sufficient far away relative to their size. However, PCA is not applicable to eliminate these degrees of freedom, because the normalized form found with PCA is not invariant under shearing and squeezing. In general, based on the property of data, we would need new data normalization methods that can uncover invariant structures depending on the degrees of freedom we would like to remove.

In this paper we study the cases when degrees of freedom to be removed have a group structure G when combined. Under such a condition, a data matrix X can be mapped to its quotient set X/∼ by the equivalence relation ∼ defined as

We call the elements of quotient set ^X∈X/∼ canonical forms of data, as they are invariant with respect to (w.r.t.) group actions g∈G. An important example of using the quotient set is the shape space method [4], which works in the quotient space of rotation matrix and is closely related to PCA and SVD.

Here and later, we restrict ourselves to the case when G is a matrix group and when the group acts by simple matrix product. The quotient mapping X→^X can then be represented in the form of matrix decomposition:

Instead of constructing separate algorithms for different G, we use an optimization process to induce corresponding matrix decomposition techniques. In particular, given a data matrix M, we consider a group orbit optimization (GOO) problem as follows:

where ϕ:Fn1×n2→R is a cost function and F is some number field.

In Section 3 we present several special classes of cost functions, which are used to construct new formulations for several matrix decompositions including SVD, Schur, LU, Cholesky and QR in Section 4. As an application, in Section 6 we illustrate how to use GOO to normalize low dimensional point cloud data over a special linear group. Experiment results for two-dimensional and three-dimensional point cloud are given in Figure 1 and Figure 2. It can be observed that the effect of rotation, shearing and squeezing in data has been mostly eliminated in the normalized point clouds. The detail of this normalization is explained in Section 6.

The GOO formulation also allows us to construct generalizations of some matrix decompositions to tensor. Real world data have tensor structure when some value depends on multiple factors. For example, in an electronic-commerce site, user preferences in different brands form a matrix. As such preferences change over time, the time-dependent preferences form a 3 order tensor. As in the matrix case, tensor decomposition techniques [13, 14] aim to eliminate degrees of freedom in data while respecting the tensor structure of data. In Section 5, we use GOO to induce tensor decompositions that can be used for normalizing tensor. In the unified framework of GOO, the GOO inducing tensor decomposition when applied to a 2 order tensor, is exactly the same as the GOO inducing matrix decomposition, when the same group and cost function is used for both GOO problems.

The remainder of paper is organized as follows. Section 2 gives notation used in this paper. Section 3 defines several properties for describing the cost function used in defining GOO to induce matrix and tensor decompositions. Section 4 studies GOO formulations that can induce SVD, Schur, LU, Cholesky, QR, etc. Section 5 demonstrates how to use GOO to induce tensor decompositions and prove a few inequalities relating a few forms of GOO. Section 6 demonstrates how to normalize point cloud data distorted by rotation, shearing and squeezing with GOO over the special linear group. Section 7 presents numerical algorithms and examples of matrix decomposition, point cloud normalization and tensor decomposition. Finally, we conclude the work in Section 9.

for p≥0. Note that we abuse the notation a little bit as ∥X∥p is not a norm when p<1. When p=2, it is also called the Frobenius norm and usually denoted by ∥X∥F

. When applied to vector

x, ∥x∥2 is the ℓ2-norm and it is shortened as ∥x∥. The dual norm of the p-norm where p≥1 is equivalent to the q-norm, where 1p+1q=1. We let ∥X∥∗p denote the Schatten p-norm; that is, it is the ℓp norm of the vector of the singular values of X.

A matrix A∈Fm×n is said to be pseudo-diagonal if there exist permutation matrices P and Q such that PAQ⊤ is diagonal.

Note that a diagonal matrix is also pseudo-diagonal.

Given a pseudo-diagonal matrix A, we have that

We let Poly(M) be the polyhedral formed by points with coordinates being rows of M, and μ(Poly(M)) be the Lebesgue measure of Poly(M). We let Rasterize(Poly(M)) be a matrix Z where zij is the image pixel value at coordinate (i,j) of image rasterized from polyhedral Poly(M) with unit grid.

For shorthand, we denote

Here Y=∏iXUi when ∀i,mi=ni is also known as the Tucker decomposition in the literature [24]. With this notation, the SVD of a real matrix M=U1\boldmathΣ\unboldmathU⊤2 can be written as

Using the vectorization operation for tensor, we have

We note that index−1N(n) is well-defined.

The ℓp-norm of tensor A is defined as

for an arbitrary mode i. For tensors A,B∈Fn1×n2×…×nk, ⟨A,B⟩ is their Frobenius inner product defined as:

In this paper we would like to show that matrix and tensor decompositions techniques can be induced from formulations of the group orbit optimization. As we have seen in formula (1), a GOO problem includes two key ingredients: a cost function ϕ and a group structure G. Thus, we present preliminaries, including sparsifying function and a unit matrix group. The sparsifying functions will be used to define cost functions for some matrix decompositions in Table 1 that have diagonal matrices in decomposed formulations.

It should be noted that other classes of functions can be used together with some unit matrix groups to induce interesting matrix and tensor decompositions. Confer Schur decomposition in Table 1 for an example.

Since f(ex) is convex, we have

The following theorem gives a sufficient condition for function f to be sparsifying.

It can be directly checked that the following functions are sparsifying.

We note that log|x| is not subadditive because f(0)=−∞<0. Although f(x)=|x|p for p<0 is subadditive, |x|p is not concave. Thus, these two functions are not sparsifying.

Clearly, unitary, orthogonal, and unit-triangular matrix groups are unit groups. We now present some properties of the unit groups.

Unit group has the following properties.

Finally, in Table 1 we list matrix decompositions of X used in this paper. When referring to the Cholesky decomposition, X should be positive definite.

We now illustrate how matrix decomposition can be induced from GOO. Given two groups G1,G2 and a data matrix M, we consider the following optimization problem

Assume that ^G1 and ^G2 are minimizers of the above GOO and D=^G2M^G⊤1, then we refer to

as a matrix decomposition of M which is induced from Formula (3).

When ϕ=φ∘vec, an equivalent formulation of Formula (3) is:

For a general matrix group G, G∈G implies that |det(G)|>0. However, group structure may not be sufficient to induce non-trivial matrix decomposition, as with some groups and cost functions the infimum will be trivially zero. For example, with general linear group GL and for any matrix M, we have

Nevertheless, if we require G to be a unit group, we have |det(G)|=1. Consequently, we can prevent the infimum from vanishing trivially for any ℓp-norm. Thus, we mainly consider the case where G is a unit group in this paper.

by using the corresponding unit group G and cost function ϕ, which are given in Table 2.

Clearly, the matrix groups in Table 2 are unit groups by Lemma 3.2. We will prove the rest of theorem in Section 4.2 and Section 4.3.

finds a diagonal matrix equivalent to an invertible matrix

. In this case, we can zero-pad

D to ~D∈Fm×n, and extend A and B to ~A∈Fm×m and ~B∈Fn×n which are square matrices. Accordingly, we formulate a decomposition M=~A~D~B⊤ which may be induced from GOO.

We next prove a lemma that characterizes the optimum. [Criteria for infimum] If ϕ(GD)≥ϕ(D) for any G∈G and there exists A∈G s.t. M=AD, then

We note that . By the group structure, the coset {GA:G∈G}=G. Hence we have

Using the condition ∀G∈G,ϕ(GD)≥ϕ(D), we have

By virtue of Lemma 2, if we want to prove that matrix decomposition vec(M)=~Gvec(D) is induced by a GOO w.r.t. ϕ and G, we only need prove that there exists a ~G∈G s.t. vec(M)=~Gvec(D), and ϕ(Gvec(D))≥ϕ(vec(D)) ∀G∈G. The equality condition will determine the uniqueness of the optimum of the optimization problem.

Next we demonstrate how matrix diagonalization can be induced from GOO with proper choice of cost function and unit group.

First we discuss SVD of a complex matrix and of a real matrix. [Cost function and group for SVD] Let D=[dij] be pseudo-diagonal, and U,V∈U(n). Given a function f such that f(x)=f(|x|) and f(√|x|) is strictly concave and subadditive, and ϕ(X)=∑ijf(xij) we have

with equality iff there exists a row permutation matrix P such that |UDV∗|=|PD|.

with equality iff there exists a row permutation matrix P such that |UDV⊤|=|PD|.

Alternatively, we can also apply the inequality to each row of A and have

As D is pseudo-diagonal, D∗D is diagonal. Because g is concave and VV∗=I, we can apply Jensen’s inequality, obtaining

Hence altogether we have:

Next we check the equality condition. By Theorem 3.1, g is sparsifying. For the equality condition in inequality (5) to hold, A can have at most one nonzero in each column. By the symmetry between (5) and (6), and noting ϕ(A⊤)=ϕ(A) and ϕ(D)=ϕ(D⊤), A can also have at most one nonzero in each row for ϕ(A)=ϕ(D) to hold. Hence when the equality holds, A is pseudo-diagonal. Then there exists a permutation matrix P such that Z=P−1|A|=P−1QA is a diagonal matrix with elements on diagonal in descending order and are all non-negative, where Q is a diagonal matrix s.t. |Q|=I. By the uniqueness of singular values of a matrix, we have Z=|D|. Hence equality in inequality4 holds when |A|=P|D|=|PD|.

The proof for U,V∈O(n) is similar.

Note that D, modulo sign and permutation, is the global minimizer for a large class of functions f.

After applying Lemma 2, we have the following theorem. [SVD induced from optimization] We are given a function f such that f(x)=f(|x|) and f(√|x|) is strictly concave and subadditive, and ϕ(X)=∑ijf(xij). Let ^U and ^V be an optimal solution of the following optimization:

Then if SVD of M is M=USV∗, there exist a permutation matrix P and a diagonal matrix Z such that M=^UPZ^V∗ and |Z|=S.

With ϕ as in Theorem 4.2.1, eignedecomposition of a Hermitian matrix M can be induced from

Similarly, eignedecomposition of a real symmetric matrix M can be induced from

From the above optimization, we can derive several inequalities.