This paper constructs translation invariant operators on L2(R^d), which are Lipschitz continuous to the action of diffeomorphisms. A scattering propagator is a path ordered product of non-linear and non-commuting operators, each of which computes the modulus of a wavelet transform. A local integration defines a windowed scattering transform, which is proved to be Lipschitz continuous to the action of diffeomorphisms. As the window size increases, it converges to a wavelet scattering transform which is translation invariant. Scattering coefficients also provide representations of stationary processes. Expected values depend upon high order moments and can discriminate processes having the same power spectrum. Scattering operators are extended on L2 (G), where G is a compact Lie group, and are invariant under the action of G. Combining a scattering on L2(R^d) and on Ld (SO(d)) defines a translation and rotation invariant scattering on L2(R^d). 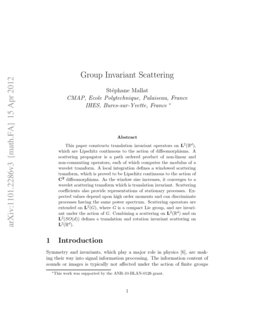 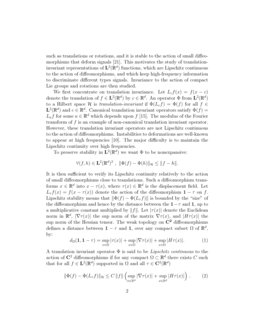 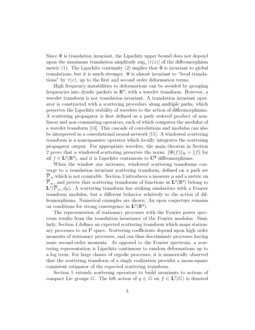 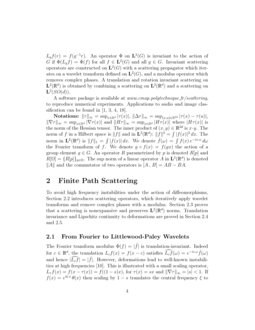 . The modulus of the Fourier transform of

To preserve stability in L2(Rd) we want Φ to be nonexpansive:

the sup norm of the Hessian tensor. The weak topology on

C2 diffeomorphisms defines a distance between 1−τ and 1, over any compact subset Ω of Rd, by:

. This cascade of convolutions and modulus can also be interpreted as a convolutional neural-network

space. Scattering coefficients depend upon high order moments of stationary processes, and can thus discriminate processes having same second-order moments. As opposed to the Fourier spectrum, a scattering representation is Lipschitz continuous to random deformations up to a log term. For large classes of ergodic processes, it is numerically observed that the scattering transform of a single realization provides a mean-square consistent estimator of the expected scattering transform.

A software package is available at www.cmap.polytechnique.fr/scattering, to reproduce numerical experiments. Applications to audio and image classification can be found in [1, 3, 4, 18].

To avoid high frequency instabilities under the action of diffeomorphisms, Section 2.2 introduces scattering operators, which iteratively apply wavelet transforms and remove complex phases with a modulus. Section 2.3 proves that a scattering is nonexpansive and preserves L2(Rd) norms. Translation invariance and Lipschitz continuity to deformations are proved in Section 2.4 and 2.5.

2.1 From Fourier to Littlewood-Paley Wavelets

The Fourier transform modulus Φ(f)=|^f| is translation-invariant. Indeed for c∈Rd, the translation Lcf(x)=f(x−c) satisfies ˆLcf(ω)=e−ic.ω^f(ω) and hence |ˆLcf|=|^f|. However, deformations lead to well-known instabilities at high frequencies [10]. This is illustrated with a small scaling operator, Lτf(x)=f(x−τ(x))=f((1−s)x), for τ(x)=sx and ∥∇τ∥∞=|s|<1. If f(x)=eiξ⋅xθ(x) then scaling by 1−s translates the central frequency ξ to (1−s)ξ. If θ is regular with a fast decay then

Since |ξ| can be arbitrarily large, Φ(f)=|^f| does not satisfy the Lipschitz continuity condition (2) when scaling high frequencies. The frequency displacement from ξ to (1−s)ξ has a small impact if sinusoidal waves are replaced by localized functions having a Fourier support which is wider at high frequencies. This is achieved by a wavelet transform [7, 14], whose properties are briefly reviewed in this section.

A wavelet transform is constructed by dilating a wavelet ψ∈L2(Rd) with a scale sequence {aj}j∈Z for a>1. For image processing, usually a=2 [3, 4]. Audio processing requires a better frequency resolution with typically a≤21/8 [1]. To simplify notations, we normalize a=2, with no loss of generality. Dilated wavelets are also rotated with elements of a finite rotation group G, which also includes the reflection −1 with respect to 0: −1x=−x. If d is even then G is a subgroup of SO(d), and if d

G is a finite subgroup of O(d). A mother wavelet ψ is dilated by 2−j and rotated by r∈G

Its Fourier transform is ^ψ2jr(ω)=^ψ(2−jr−1ω). A scattering transform is computed with wavelets that can be written

As opposed to wavelet bases, a Littlewood-Paley wavelet transform [7, 14] is a redundant representation which computes convolution values at all x∈Rd, without subsampling:

Its Fourier transform is

A wavelet transform at a scale 2J only keeps wavelets of frequencies 2j>2−J. The low frequencies which are not covered by these wavelets are provided by an averaging over a spatial domain proportional to 2J:

For any J∈Z or J=∞, WJ is unitary in the spaces of real-valued or complex-valued functions in L2(Rd) if and only if for almost all ω∈Rd

where β=1 for complex functions and β=1/2 for real functions.

Proof: If f is complex, β=1 and one can verify that (9) is equivalent to

Conversely, if ∥WJf∥2=∥f∥2 then (10) is satisfied for almost all ω. Otherwise, one can construct a function f≠0 where ^f has a support in the domain of ω where (10) is not valid. With the Plancherel formula we verify that ∥WJf∥2≠∥f∥2, which contradicts the hypothesis.

If ~ψ is a real wavelet which generates a dyadic orthonormal basis of L2(R) [14] then ^ψ=2ˆ~ψ1ω>0 satisfies (9). Numerical examples in the paper are computed with a complex wavelet ψ calculated from a cubic-spline orthogonal Battle-Lemarié wavelet ~ψ [14].

In any dimension d≥2, ^ψ∈L2(Rd) can be defined as a separable product in frequency polar coordinates ω=|ω|η, with η in the unit sphere Sd of Rd:

The one-dimensional function ^ψ(|ω|) is chosen to satisfy (12). The Littlewood-Paley condition (9) is then equivalent to

. More generally, one can verify that any linear transformation of

W[λ]f, which is translation invariant, is necessarily zero. To get a non-zero invariant, we set U[λ]f=M[λ]W[λ]f where M[λ] is a non-linear “demodulation” which maps W[λ]f to a lower frequency function having a non-zero integral. The choice of M[λ] must also preserve the Lipschitz continuity to diffeomorphism actions.

The convolution fλ⋆θλ is a low-frequency filtering because ^θλ(ω)=^θ(λ−1ω) covers a frequency ball centered at ω=0, of radius proportional to |λ|. A non-zero invariant can thus be obtained by canceling the modulation term eiλη⋅x with M[λ]. A simple example is:

where Φ(^h(λη)) is the complex phase of ^h(λη). This non-linear phase registration guarantees that M[λ] commutes with translations. It results from (13) that ∫M[λ]W[λ]f(x)dx=|^f(λη)||^θ(0)|. It recovers the Fourier modulus representation, which is translation invariant but not Lipschitz continuous to diffeomorphisms as shown in (3). Indeed, the demodulation operator M[λ] in (14) commutes with translations but does not commute with the action of diffeomorphisms, and in particular with dilations. The commutator norm of M[λ] with a dilation is equal to 2, even for arbitrarily small dilations, which explains the resulting instabilities.

Lipschitz continuity under the action of diffeomorphisms is preserved if M[λ] commutes with the action of diffeomorphisms. For L2(Rd) stability, we also impose that M[λ] is nonexpansive. One can prove [4] that M[λ] is then necessarily a pointwise operator, which means that M[λ]h(x) only depends on the value of h at x. We further impose that ∥M[λ]h∥=∥h∥ for all h∈L2(Rd), which then implies that |M[λ]h|=|h|. The most regular functions are obtained with M[λ]h=|h|, which eliminates all phase variations. We derive from (13) that this modulus maps W[λ]f into a lower frequency envelop:

The integration ∫U[λ]f(x)dx=∫|f⋆ψλ(x)|dx is translation invariant but it removes all the high frequencies of |f⋆ψλ(x)|. To recover these high frequencies, a scattering also computes the wavelet coefficients of each U[λ]f: {U[λ]f⋆ψλ′}λ′. Translation invariant coefficients are again obtained with a modulus U[λ′]U[λ]f=|U[λ]f⋆ψλ′| and an integration ∫U[λ′]U[λ]f(x)dx. If f(x)=cos(ξ1⋅x)+acos(ξ2⋅x) with a<1, |ξ2−ξ1|≪|λ| and |ξ2−ξ1| in the support of ^ψλ′ then U[λ′]U[λ]f is proportional to a|ψλ(ξ1)||ψλ′(|ξ2−ξ1|)|. The second wavelet ^ψλ′ captures the interferences created by the modulus, between the frequency components of f in the support of ^ψλ. We now introduce the scattering propagator, which extends these decompositions.

An ordered sequence p=(λ1,...,λm) with λk∈Λ∞=2Z×G+ is called a path. The empty path is denoted p=∅. Let U[λ]f=|f⋆ψλ| for f∈L2(Rd). A scattering propagator is a path ordered product of non-commutative operators defined by

The operator U[p] is well defined on L2(Rd) because ∥U[λ]f∥≤∥ψλ∥1∥f∥ for all λ∈Λ∞. The scattering propagator is a cascade of convolutions and modulus:

Section 2.1 explains that if f is complex valued then its wavelet transform is W∞f={W[λ]f}λ∈Λ∞−λ∈Λ∞ whereas if f is real then W∞f={W[λ]f}λ∈Λ∞. If f is complex then at the next iteration U[λ1]f=|W[λ1]f| is real so next stage wavelet transforms are computed only for λk∈Λ∞. The scattering propagator of a complex function is thus defined over “positive” paths p=(λ1,λ2,...,λm)∈Λm∞ and “negative” paths denoted −p=(−λ1,λ2,...,λm). This is analogous to the positive and negative frequencies of a Fourier transform. If f is real then W[−λ1]f=W[λ1]f∗ so U[−λ1]f=U[λ1]f and hence U[−p]f=U[p]f. To simplify explanations, all results are proved on real functions with scattering propagators restricted to positive paths. These results apply to complex functions by including negative paths.

Let P∞ be the set of all finite paths. The scattering transform of f∈L1(Rd) is defined for any p∈P∞ by

A scattering is a translation-invariant operator which transforms f∈L1(Rd) into a function of the frequency path variable p. The normalization factor μp results from a path measure introduced in Section 3. Conditions are given so that μp does not vanish. This transform is then well-defined for any f∈L1(Rd) and any p of finite length m. Indeed ∥ψλ∥1=∥ψ∥1 so (16) implies that ∥U[p]f∥1≤∥f∥1∥ψ∥m1. We shall see that a scattering transform has similarities with Fourier transform modulus, where the path p plays the role of a frequency variable. However, as opposed to a Fourier modulus, a scattering transform is stable to the action of diffeomorphisms, because it is computed by iterating on wavelet transforms and modulus operators, which are stable. For complex-valued functions, ¯¯¯¯Sf is also defined on negative paths, and ¯¯¯¯Sf(−p)=¯¯¯¯Sf(p) if f is real.

If p≠∅ then ¯¯¯¯Sf(p) is non-linear but it preserves amplitude factors:

A scattering has similar scaling and rotation covariance properties as a Fourier transform. If f is scaled and rotated, 2lg∘f(x)=f(2lgx), then (11) implies that U[λ](2lg∘f)=2lg∘U[2−lgλ]f and cascading this result shows that

Inserting this result in the definition (18) proves that

The convolution with ϕ2J(x)=2−dJϕ(2−Jx) localizes the scattering transform over spatial domains of size proportional to 2J:

It defines an infinite family of functions indexed by PJ, denoted

For complex-valued functions, negative paths are also included in PJ, and SJ[−p]f=SJ[p]f if f is real.

Section 2.3 proves that for appropriate wavelets, ∥f∥2=∑p∈PJ∥SJ[p]f∥2. However, the signal energy is mostly concentrated on a much smaller set of frequency-decreasing paths p=(λk)k≤m for which |λk+1|≤|λk|. Indeed, the propagator U[λ] progressively pushes the energy towards lower frequencies. The main theorem of Section 2.5 proves that a windowed scattering is Lipschitz continuous to the action of diffeomorphisms.

However, when J increases, the path set PJ also increases. Section 3 shows that {PJ}J∈Z defines a multiresolution path approximation of a much larger set ¯¯¯¯P∞ including paths of infinite length. This path set is not countable as opposed to each PJ, and Section 3 introduces a measure μ and a metric on ¯¯¯¯P∞.

Section 3.2 extends the scattering transform ¯¯¯¯Sf(p) to all f∈L2(Rd) and to all p∈¯¯¯¯P∞, and proves that ¯¯¯¯Sf∈L2(¯¯¯¯P∞,dμ). A sufficient condition is given to guarantee a strong convergence of SJf to ¯¯¯¯Sf, and it is conjectured that it is valid on L2(Rd). Numerical examples illustrate this convergence and show that a scattering transform has strong similarities with a Fourier transforms modulus, when mapping the path p to a frequency variable ω∈Rd.

We prove that a windowed scattering SJ is nonexpansive, and preserves the L2(Rd) norm. Family of operators indexed by a path set Ω are written SJ[Ω]={SJ[p]}p∈Ω and U[Ω]={U[p]}p∈Ω.

with AJf=f⋆ϕ2J and U[λ]f=|f⋆ψλ|. After calculating UJf, applying again UJ to each U[λ]f yields a larger infinite family of functions. The decomposition is further iterated by recursively applying UJ to each U[p]f. Since U[λ]U[p]=U[p+λ] and AJU[p]=SJ[p], it results that

Let ΛmJ be the set of paths of length m, with Λ0J={∅}. It is propagated into

Since PJ=∪m∈NΛmJ, one can compute SJ[PJ]f from f=U[∅]f by iteratively computing UJU[ΛmJ]f for m going from 0 to ∞, as illustrated in Figure 1.

[11] and are studied as models for visual perception [2, 17]. Relations between scattering operators and path formulations of quantum field physics are also studied in [9].

The propagator UJf={AJf,(|W[λ]f|)λ∈ΛJ} is nonexpansive because the wavelet transform WJ is unitary and a modulus is nonexpansive in the sense that ||a|−|b||≤|a−b| for any (a,b)∈C2. This is valid whether f is real or complex. As a consequence