Grid graphs, and, more generally, k× r grid graphs, form one of the most basic classes of geometric graphs. Over the past few decades, a large body of works studied the (in)tractability of various computational problems on grid graphs, which often yield substantially faster algorithms than general graphs. Unfortunately, the recognition of a grid graph is particularly hard – it was shown to be NP-hard even on trees of pathwidth 3 already in 1987. Yet, in this paper, we provide several positive results in this regard in the framework of parameterized complexity (additionally, we present new and complementary hardness results). Specifically, our contribution is threefold. First, we show that the problem is fixed-parameter tractable (FPT) parameterized by k+𝗆𝖼𝖼 where 𝗆𝖼𝖼 is the maximum size of a connected component of G. This also implies that the problem is FPT parameterized by 𝚝𝚍+k where 𝚝𝚍 is the treedepth of G (to be compared with the hardness for pathwidth 2 where k=3). Further, we derive as a corollary that strip packing is FPT with respect to the height of the strip plus the maximum of the dimensions of the packed rectangles, which was previously only known to be in XP. Second, we present a new parameterization, denoted a_G, relating graph distance to geometric distance, which may be of independent interest. We show that the problem is para-NP-hard parameterized by a_G, but FPT parameterized by a_G on trees, as well as FPT parameterized by k+a_G. Third, we show that the recognition of k× r grid graphs is NP-hard on graphs of pathwidth 2 where k=3. Moreover, when k and r are unrestricted, we show that the problem is NP-hard on trees of pathwidth 2, but trivially solvable in polynomial time on graphs of pathwidth 1. 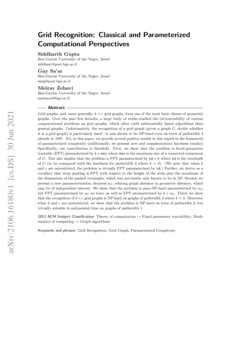 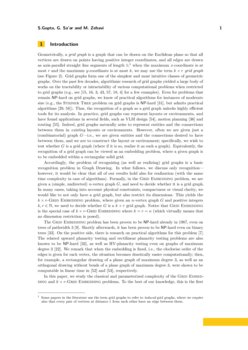 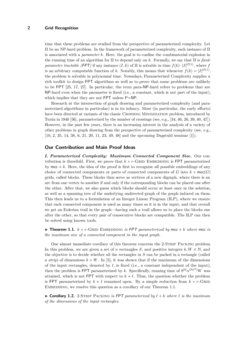 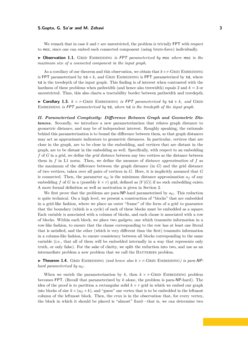 A Survey on Approximation in Parameterized Complexity: Hardness and Algorithms

A Refined Complexity Analysis of Fair Districting over Graphs

The Defensive Alliance problem has been studied extensively during the l...
Ajinkya Gaikwad, et al. ∙

On the Parameterized Complexity of the Maximum Exposure Problem

On the hardness of losing weight

A Refined View of Causal Graphs and Component Sizes: SP-Closed Graph Classes and Beyond

The causal graph of a planning instance is an important tool for plannin...
Christer Bäckström, et al. ∙