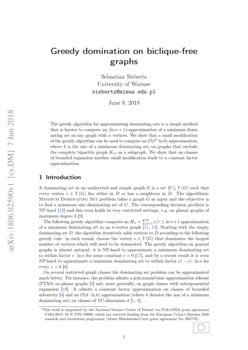 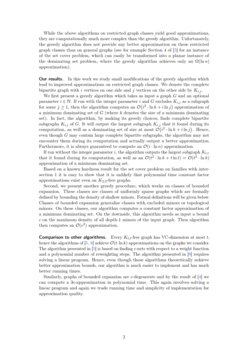 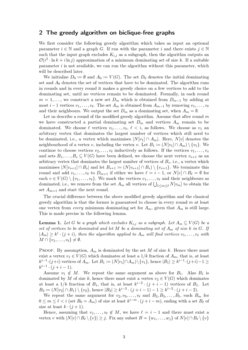 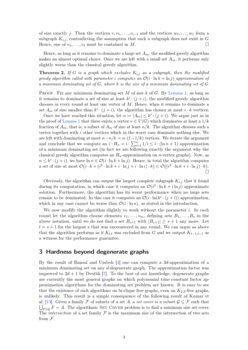 On Minimum Dominating Sets in cubic and (claw,H)-free graphs

A dominating set in an undirected and simple graph G is a set D⊆V(G) such that every vertex v∈V(G) lies either in D or has a neighbour in D. The Minimum Dominating Set problem takes a graph G as input and the objective is to find a minimum size dominating set of G. The corresponding decision problem is NP-hard karp1972reducibility and this even holds in very restricted settings, e.g. on planar graphs of maximum degree 3 garey2002computers .

The following greedy algorithm approximates Minimum Dominating Set in an n-vertex graph G up to a factor Hn=∑ni=11/i≤(lnn+1) johnson1974approximation ; lovasz1975ratio . Starting with the empty dominating set D, the algorithm iteratively adds vertices to D according to the following greedy rule until all vertices are dominated: in each round, choose the vertex v∈V(G) that dominates the largest number of vertices which still need to be dominated. The greedy algorithm on general graphs is almost optimal: it is NP-hard to approximate Minimum Dominating Set within factor c⋅lnn for some constant c>0 raz1997sub , and by a recent result it is even NP-hard to approximate Minimum Dominating Set within factor (1−ϵ)⋅lnn for every ϵ>0 dinur2014analytical .

We follow the approach of Jones et al. jones2013parameterized and study small modifications of the greedy algorithm which lead to improved approximations on restricted graph classes. We denote the complete bipartite graph with i vertices on one side and j vertices on the other side by Ki,j.

We present a greedy algorithm which takes as input a graph G and an optional parameter i∈N. If run with the integer parameter i and G excludes Ki,j as a subgraph for some j≥1, then the algorithm computes an O(i2⋅lnk+i⋅lnj) approximation of Minimum Dominating Set (where k denotes the size of a minimum dominating set in G). If run without the integer parameter i, the algorithm outputs the largest subgraph Kt,t that it found during its computation, as well as an O(t2⋅lnk+ t⋅lnt)=O(t2⋅lnk) approximation of Minimum Dominating Set. By running the classical greedy algorithm in parallel, the approximation ratios can be improved to O(i⋅lnk+lnj), and O(t⋅lnk), respectively.

Based on a known hardness result for the set cover problem on families with intersection 1 it is easy to show that it is unlikely that polynomial time constant factor approximations exist even on K3,3-free graphs.

Comparison to other algorithms

requires solving a linear program. Hence, even though these algorithms achieve the same approximation bounds as our modified greedy algorithm, our algorithm is much easier to implement and has much better running times. On the other hand,

Kt,t-free-graphs are strictly more general than degenerate graphs. Hence, our algorithm is applicable to a more general class of graphs than the algorithm of Jones et al. jones2013parameterized .

2 The greedy algorithm on biclique-free graphs

We first consider the following greedy algorithm which takes as input an optional parameter i∈N and a graph G. We start by presenting how the algorithm works if the parameter i is given with the input.

We initialise D0\coloneqq∅ and A0\coloneqqV(G). The set D0 denotes the initial dominating set and A0 denotes the set of vertices that have to be dominated. The algorithm runs in rounds and in every round it makes a greedy choice on a few vertices to add to the dominating set, until no vertices remain to be dominated. Formally, in each round m=1,…, we construct a new set Dm which is obtained from Dm−1 by adding at most i−1 vertices v1,…,vℓ. The set Am is obtained from Am−1 by removing v1,…,vℓ and their neighbours. We output the set Dm as a dominating set, when Am=∅.

Let us describe a round of the modified greedy algorithm. Assume that after round m we have constructed a partial dominating set Dm and vertices Am remain to be dominated. We choose ℓ vertices v1,…,vℓ, ℓ<i, as follows. We choose as v1 an arbitrary vertex that dominates the largest number of vertices which still need to be dominated, i.e., a vertex which maximises |N[v1]∩Am|. Here, N[v] denotes the neighbourhood of a vertex v, including the vertex v. Let B1\coloneqq(N[v1]∩Am)∖{v1}. We continue to choose vertices v2,…,vℓ inductively as follows. If the vertices v1,…,vs and sets B1,…,Bs⊆V(G) have been defined, we choose the next vertex vs+1 as an arbitrary vertex not in {v1,…,vs} that dominates the largest number of vertices of Bs, i.e., a vertex which maximises |N[vs+1]∩Bs| and let Bs+1\coloneqq(N[vs+1]∩Bs)∖{vs+1}. We terminate this round and add v1,…,vℓ to Dm+1 if either we have ℓ=i−1, or N[v]∩Bℓ=∅ for each v∈V(G)∖{v1,…,vℓ}. We mark the vertices v1,…,vℓ and their neighbours as dominated, i.e., we remove from the set Am all vertices of ⋃1≤m≤ℓN[vm] to obtain the set Am+1 and start the next round.

The crucial difference between the above modified greedy algorithm and the classical greedy algorithm is that the former is guaranteed to choose in every round m at least one vertex from every minimum dominating set for Am, given that Am is still large. This is made precise in the following lemma.

Let G be a graph which excludes Ki,j as a subgraph. Let Am⊆V(G) be a set of vertices to be dominated and let M be a dominating set of Am of size k in G. If |Am|≥ki⋅(j+i), then the algorithm applied to Am will find vertices v1,…,vℓ with M∩{v1,…,vℓ}≠∅.

Hence, as long as it remains to dominate a large set Am, the modified greedy algorithm makes an almost optimal choice. Once we are left with a small set Am, it performs only slightly worse than the classical greedy algorithm.

With slightly more computational effort we can compute an O(i⋅lnk+lnj) approximation on Ki,j-free graphs (and an O(t⋅lnk) approximation on Kt,t-free graphs, respectively) as follows. For each of the sets D0,D1,… constructed in the course of the algorithm, run the standard greedy algorithm to extend it to a dominating set, and return the smallest of the sets obtained in this way. Letting p be the first index such that Dp dominates all but at most n=ki⋅(i+j) vertices of the graph, the above argument shows that |Dp|≤i⋅k. The standard greedy algorithm then adds at most lnn⋅k∈O((i⋅lnk+lnj)⋅k) further vertices to the dominating set, resulting in a dominating set of size O((i⋅lnk+lnj)⋅k).

We now modify the algorithm slightly to work without the parameter i. In each round let the algorithm choose elements v1,…,vℓ, defining sets B1,…,Bℓ in the above notation, until we do not find a vertex vℓ+1 defining a set Bℓ+1 with |Bℓ+1|≥ℓ+1 any more. Let t=ℓ+1 for the largest ℓ that was encountered in any round. Hence, the modified algorithm chooses at most t−1 elements in every round. Observe that in this construction, when we are at step i and the corresponding set Bi has size at least j, 1≤i≤ℓ, j≥1, then we have found a subgraph Ki,j. Hence, t is the least number such that the algorithm did not find Kt,t as a subgraph and we can argue as above that the algorithm performs as if Kt,t was excluded from G. We output Kt−1,t−1 as a witness for this performance guarantee.

Finally, note that the algorithm can be used to approximate the minimum size of a set which dominates a given subset S of vertices of the graph, by initializing A0=S instead of A0=V(G).

By the result of Bansal and Umboh bansal2017tight one can compute a 3d approximation of a minimum dominating set on any d-degenerate graph. The approximation factor was improved to 2d+1 by Dvořák dvovrak2017distance . To the best of our knowledge, degenerate graphs are currently the most general graphs on which polynomial time constant factor approximation algorithms for the dominating set problem are known. It is easy to see that the existence of such algorithms on bi-clique free graphs, even on K3,3-free graphs, is unlikely. This result is a simple consequence of the following result of Kumar et al. kumar2000hardness . Given a family F of subsets of a set A, a set cover is a subset G⊆F such that ⋃F∈GF=A. The Minimum Set Cover problem is to find a minimum size set cover. The intersection of a set family F is the maximum size of the intersection of two sets from F.

The Minimum Set Cover problem on set families of intersection 1 cannot be approximated to within a factor of clognloglogn for some constant c in polynomial time unless for some constant ϵ<1/2 it holds that \textscNP⊆\textscDTIME(2n1−ϵ).

Now it is easy to derive the following theorem.

The Minimum Dominating Set problem on K3,3-free graphs cannot be approximated to within a factor of clognloglogn for some constant c in polynomial time unless for some constant ϵ<1/2 it holds that \textscNP⊆DTIME(2n1−ϵ).

We present an approximation preserving reduction from Minimum Set Cover on instances of intersection 1 to Minimum Dominating Set on K3,3-free graphs. Let F be an instance of Minimum Set Cover with intersection 1. Let A=⋃F∈FF. We compute in polynomial time an instance of Minimum Dominating Set on a graph G as follows. We let V(G)=A∪F∪{x,y}, where x,y are new vertices that do not appear in A. We add all edges {u,F} if u∈F, as well as all edges {x,F} for F∈F and the edge {x,y}.

Now if G⊆F is a feasible solution for the Minimum Set Cover instance, then G (as a subset of G) together with the vertex x is a dominating set for G of size at most |G|+1. Conversely, let D be a dominating set for G. We construct another dominating set X such that |X|≤|D| and X⊆F∪{x}. We simply replace each u∈A by a neighbour F∈F. Furthermore, if y∈D, we replace y by x. Observe that x or y must belong to D, as y must be dominated. Hence, in any case, x∈X. Now G∩X is a set cover of size |X|−1. Hence, the reduction preserves approximations.

Finally observe that the reduction is obviously polynomial time computable.

I thank Saket Saurabh for pointing me to the work of Jones et al. jones2013parameterized . I thank the anonymous reviewers for their valuable comments, and in particular for pointing out that the modified greedy algorithm can be improved to an O(t⋅lnk) approximation by running the classical greedy algorithm in parallel.