Bayesian strategies for contextual bandits have proved promising in single-state reinforcement learning tasks by modeling uncertainty using context information from the environment. In this paper, we propose Greedy Bandits with Sampled Context (GB-SC), a method for contextual multi-armed bandits to develop the prior from the context information using Thompson Sampling, and arm selection using an epsilon-greedy policy. The framework GB-SC allows for evaluation of context-reward dependency, as well as providing robustness for partially observable context vectors by leveraging the prior developed. Our experimental results show competitive performance on the Mushroom environment in terms of expected regret and expected cumulative regret, as well as insights on how each context subset affects decision-making. 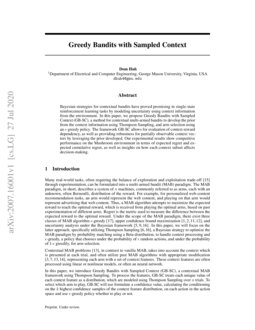 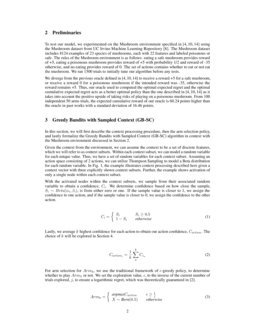 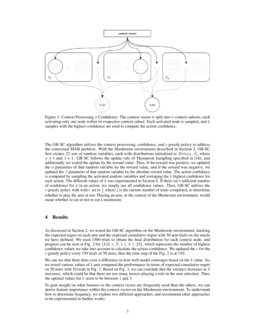 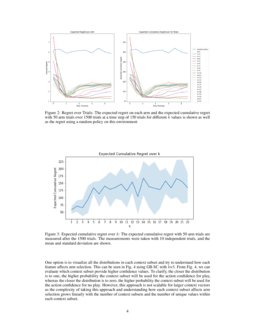 Many real-world tasks, often requiring the balance of exploration and exploitation trade-off Sutton and Barto (1998) through experimentation, can be formulated into a multi-armed bandit (MAB) paradigm. The MAB paradigm, in short, describes a system of n

machines, commonly referred to as arms, each with an unknown, often Bernoulli, distribution of the reward. For example, for personalized web-content recommendation tasks, an arm would represent the web content, and playing on that arm would represent advertising that web content. Thus, a MAB algorithm attempts to maximize the expected reward to reach the optimal reward, which is received from playing the optimal arms, based on past experimentation of different arms. Regret is the metric used to measure the difference between the expected reward to the optimal reward. Under the scope of the MAB paradigm, there exist three classes of MAB algorithm

, a Bayesian strategy to optimize the MAB paradigm by probability matching using a Beta distribution, to handle context processing and

In this paper, we introduce Greedy Bandits with Sampled Context (GB-SC), a contextual MAB framework using Thompson Sampling. To process the features, GB-SC treats each unique value of each context feature as a distribution, which are modeled using Thompson Sampling over n trials. To select which arm to play, GB-SC will use formulate a confidence value, calculating the conditioning on the k highest confidence samples of the context feature distribution, on each action in the action space and use ϵ-greedy policy whether to play or not.

as it takes into account the positive upside of taking risks of playing on a poisonous mushroom. From 100 independent 50 arms trials, the expected cumulative reward of our oracle is 60.24 points higher than the oracle in past works with a standard deviation of 16.46 points.

In this section, we will first describe the context processing procedure, then the arm selection policy, and lastly formalize the Greedy Bandits with Sampled Context (GB-SC) algorithm in context with the Mushroom environment discussed in Section 2.

Lastly, we average k highest confidence for each action to obtain our action confidence, Caction. The choice of k will be explored in Section 4.

For arm selection for Armh, we use the traditional framework of ϵ-greedy policy, to determine whether to play Armh or not. We set the exploration value, ϵ, to the inverse of the current number of trials explored, j, to ensure a logarithmic regret, which was theoretically guaranteed in Auer et al. (2002).

The GB-SC algorithm utilizes the context processing, confidence, and ϵ-greedy policy to address the contextual MAB problem. With the Mushroom environment described in Section 2, GB-SC first creates 22 sets of random variables, each with distributions initialized to Beta(α,β), where α = 1 and β = 1. GB-SC follows the update rule of Thompson Sampling specified in Thompson (1933), and additionally we scaled the update by the reward value. Thus, if the reward was positive, we updated the α parameter of that random variable by the reward value, and if the reward was negative, we updated the β parameter of that random variable by the absolute reward value. The action confidence is computed by sampling the activated random variables and averaging the k highest confidence for each action. The different values of k was experimented in Section 4. If there isn’t sufficient number of confidence for k in an action, we simply use all confidence values. Then, GB-SC utilizes the ϵ-greedy policy with with ϵ set to 1j where j is the current number of trials completed, to determine whether to play the arm or not. Playing an arm, in the context of the Mushroom environment, would mean whether to eat or not to eat a mushroom.

As discussed in Section 2, we tested the GB-SC algorithm on the Mushroom environment, tracking the expected regret on each arm and the expected cumulative regret with 50 arm trials on the oracle we have defined. We used 1500 trials to obtain the final distribution for each context node, and progress can be seen in Fig. 2 for {k∥k∈N,1≤k≤22}, which represents the number of highest confidence values we take into account to calculate the action confidence. We updated the ϵ for the ϵ-greedy policy every 150 trials of 50 arms, thus the time step of the Fig. 2 is at 150.

We can see that there does exist a difference in how well model converges based on the k value. So, we tested various values of k and compared the performance in terms of expected cumulative regret on 50 arms with 10 trials in Fig. 3. Based on Fig. 3

, we can conclude that the variance increases as

k increases, which could be that there are too many factors playing a role in the arm selection. Thus, the optimal values for k seem to be between 1 and 3.

To gain insight on what features in the context vector are frequently used than the others, we can derive feature importance within the context vector on the Mushroom environment. To understand how to determine frequency, we explore two different approaches, and recommend other approaches to be experimented in further works.

In this paper, we have proposed the Greedy Bandit with Sampled Context(GB-SC) algorithm, a method of handling contextual MAB problem by using Thompson Sampling for context processing and ϵ-greedy policy for arm selection. We demonstrate competitive performance compared to the baselines shown in Riquelme et al. (2018), and we showed additional benefits such as insight into feature importance and being robust in arms with partially observable context vectors. In future works, we hope to expand the application with continuous context vectors, either through neural memory or some other method.