Kernel sparsity ("dying ReLUs") and lack of diversity are commonly observed in CNN kernels, which decreases model capacity. Drawing inspiration from information theory and wireless communications, we demonstrate the intersection of coding theory and deep learning through the Grassmannian subspace packing problem in CNNs. We propose Grassmannian packings for initial kernel layers to be initialized maximally far apart based on chordal or Fubini-Study distance. Convolutional kernels initialized with Grassmannian packings exhibit diverse features and obtain diverse representations. We show that Grassmannian packings, especially in the initial layers, address kernel sparsity and encourage diversity, while improving classification accuracy across shallow and deep CNNs with better convergence rates. 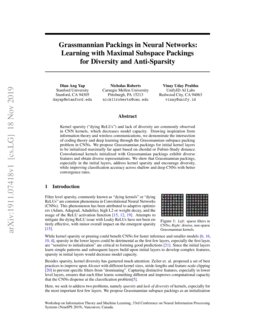 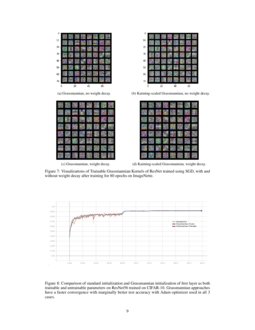 While state-of-the-art development in CNN topology, such as VGGNet and R...
Ziwei Wang, et al. ∙

Optimization on Submanifolds of Convolution Kernels in CNNs

Filter level sparsity, commonly known as “dying kernels” or “dying ReLUs” are common phenomena in Convolutional Neural Networks (CNNs). This phenomenon has been attributed to adaptive optimizers (Adam, Adagrad, Adadelta), high L2 or weight decay, and the usage of the ReLU activation function

(mehta2019implicit; lu2019dying; yaguchi2018adam). Attempts to mitigate the dying ReLU issue with Leaky ReLUs have not been entirely effective, with minor overall impact on the emergent sparsity (mehta2019implicit).

While kernel sparsity or pruning could benefit CNNs for faster inference and smaller models (han2015deep; molchanov2016pruning; li2016pruning; gale2019state), sparsity in the lower layers could be detrimental as the first few layers, especially the first layer, are “sensitive to initialization” are critical to forming good predictions (zhang2019all). Since the initial layers learn simple patterns and subsequent layers build upon initial layers to develop complex features, sparsity in initial layers would decrease model capacity.

Besides sparsity, kernel diversity has garnered much attention: Zeiler et. al. proposed a set of best practices to improve upon Alexnet

(zeiler2014visualizing) to prevent specific filters from “dominating”. Capturing distinctive features, especially in lower level layers, ensures that each filter learns something different and improves computational capacity that the CNNs dispense at the classification problem(graff2016correlating).

Here, we seek to address two problems, namely sparsity and lack of diversity

of kernels, especially for the most important first few layers. We propose Grassmannian subspace packings as an initialization to project channel information onto a space where the basis vectors are maximally distant to capture as much diversity as possible and increase model capacity. We refer to the latter as “channel expander” layers. We demonstrate that models with first-layer Grassmannian kernels achieve better accuracy and convergence rate with diverse, non-sparse kernels, which improves model capacity.

Principle angles. Suppose that S and T are two subspaces in G(m,k). These subspaces are inclined against one another by k different principle angles, with the smallest principal angle θ1 formed by a pair of unit-length vectors (s1,t1) drawn from S×T, where

with ⟨x,y⟩ denoting the inner product of vectors x and y, and ||x||2 denoting the ℓ2 norm metric such that ||x||2=⟨x,x⟩.

The second principle angle θ2 is defined as the smallest angle obtained by a pair of unit length vectors (s2,t2) from the same subspace S×T that is orthogonal to the first pair, where

Optimizing Grassmannians using principle angles. For an N packing problem of G(m,k), let Ωm×k denote the set of subspaces in Rm×k. We find Ωm×k where the minimum distance between any wi,wj∈Ωm×k(i≠j) is maximized. The two popular distance metrics being chordal distance and Fubini-Study distance, which are defined below. With the restriction that k≤m, for two k-dimensional subspaces S and T,

The Rankin bound (barg2002bounds) provides the theoretical upper bound of the maximum of the minimum pairwise distances between subspaces and is given by,

Grassmannian packing seeks to answer "what is the best way to optimally pack N k-dim subspaces in an M-dim space?". For the first convolutional kernel with width = 3, height = 3 (9 parameters per channel) with input channels = 3, output channels = 32, we ask:

such that any two subspaces (kernels) are maximally separated?"

We first generate Grassmannian codebooks for subspace packings, and load the codebook as CNN kernels. We compare accuracy and rate of convergence of shallow CNNs and deep CNNs. For a shallow 4-conv CNN, we trained 3 models: Kaiming-initialized CNNs, the same CNN but with Grassmannian as first layer (frozen and trainable). These models had their first layer initialized as 32 packings of G(9,3) for CIFAR10 and CIFAR100, and 32 packings of G(9,1) for single-channel MNIST and KMNIST222The first conv layer has parameters (width 3, height 3, 1 or 3 input channels and 32 output channels)..

For deep CNNs, we used ResNet18 architecture and initialized the first layer with 64 packings of G(49,3)333The first layer of ResNets are conv kernels (width 7, height 7, 3 input channels and 64 output channels).. We trained ResNet with batch size of 64, SGD optimizer with learning rate of 0.01, momentum of 0.9, with a learning rate decay by a factor of √10

(he2016deep). Besides having Kaiming-initialized baseline, first-layer Grassmann and first-layer frozen Grassmann, we also scaled the Grassmann as per Kaiming init, such that the activations are correctly scaled that facilitates learning without vanishing gradients (he2015delving). We scale the Grassmannian basis such that the magnitude is of factor √2/din. Since the scaling factor is constant, the directions of Grassmannian subspace basis vectors are preserved.

We check for convergence rate by examining first-epoch accuracy of shallow CNNs on MNIST, KMNIST, CIFAR10 and CIFAR100, as well as accuracy, kernel sparsity and diversity. As adaptive optimizers and weight decay could affect sparsity, we test on different optimizers such as SGD, Adadelta and Adam, and with/without weight decay of 0.0001.

Grassmannian initialization also improves convergence for both shallow (Figure 6) and Deep CNNs (Figure 3), with both frozen and trainable Grassmannian models achieving higher first-epoch accuracy (Table 2). Grassmannian subspace initialization, where each convolutional filter was assigned the subspace basis vectors for their corresponding Grassmannian packing scheme, outperformed the baseline on every dataset.

Interestingly, we see a marginal improvement over Grassmannian initialization by simply rendering the Grassmannian initialization untrainable. We postulate that in certain cases, simply projecting the input feature maps to be as far apart as possible as opposed to using another trainable convolutional layer is enough for later layers to make better use of their own capacity, at least in early training.

Qualitative inspection of the kernels (Figure 7

, it is at odds with Grassmannian packings that are against sparsity and for diversity. Nonetheless, most models such as ResNet, RandWire, NASNet and DenseNet achieve SOTA results through SGD with a careful learning rate scheduler, which could further benefit from Grassmannian packings due to their demonstrated performance using SGD

In this work, we showed that the use of Grassmannian packings for first layer initialization improved performance in the contexts of shallow networks and deep networks, even with untrainable Grassmannian kernels, across multiple datasets. Grassmannian kernels are best used with SGD optimization and works with weight decay or otherwise. Our results suggest improvement of the model’s capacity to learn by simply initializing the first layer filters to be maximally distant and capture as many diverse features as possible. In the future, we hope to extend this analysis to explore the several other options for metric used in the Grassmannian packing, and search for ways to inform the choice in metric.

We would like to acknowledge Matthew McAteer for helpful discussions and contrbution of designs and plots for Figures 5 and 6.