In this paper, we study the robustness of graph convolutional networks (GCNs). Despite the good performance of GCNs on graph semi-supervised learning tasks, previous works have shown that the original GCNs are very unstable to adversarial perturbations. In particular, we can observe a severe performance degradation by slightly changing the graph adjacency matrix or the features of a few nodes, making it unsuitable for security-critical applications. Inspired by the previous works on adversarial defense for deep neural networks, and especially adversarial training algorithm, we propose a method called GraphDefense to defend against the adversarial perturbations. In addition, for our defense method, we could still maintain semi-supervised learning settings, without a large label rate. We also show that adversarial training in features is equivalent to adversarial training for edges with a small perturbation. Our experiments show that the proposed defense methods successfully increase the robustness of Graph Convolutional Networks. Furthermore, we show that with careful design, our proposed algorithm can scale to large graphs, such as Reddit dataset. 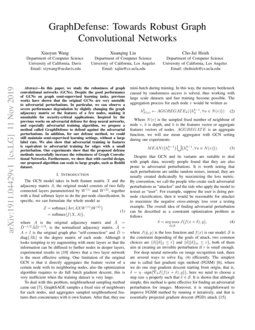 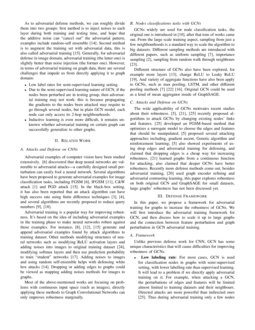 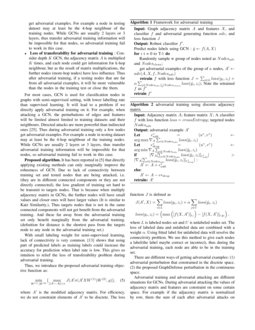 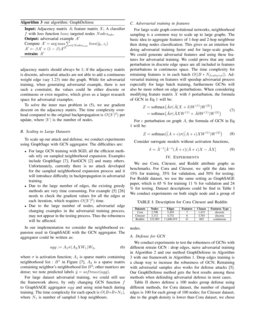 The GCN model takes in both feature matrix X and the adjacency matrix A, the original model consists of two fully connected layers parameterized by W(1) and W(2)

, together with a final softmax layer to do the per-node classification. In specific, we can formulate the whole model as

where A is the original adjacency matrix and ^A=~D−1/2~A~D−1/2, is the normalized adjacency matrix. ~A=A+I is the original graph plus “self-connection” and ~D=diag{~A1} is the degree matrix of each node. Although it looks tempting to try augmenting with more layers so that the information can be diffused to further nodes in deeper layers, experimental results in [10]

shows that a two layer network is the most effective setting. One limitation of the original GCN is that it directly aggregates the feature vector of a certain node with its neighboring nodes, also the optimization algorithm requires to do full batch gradient descent, this is very inefficient when the training dataset is very large.

To deal with this problem, neighbourhood sampling method came out [7]. GraphSAGE samples a fixed size of neighbours for each nodes, and aggregates sampled neighbourhood features then concatenates with it own feature. After that, they use mini-batch during training. In this way, the memory bottleneck caused by randomness access is solved, thus working with large scale datasets and fast training become possible. The aggregation process for each node v would be written as

Despite that GCN and its variants are suitable to deal with graph data, recently people found that they are also prone to adversarial perturbations. It is worth noting that such perturbations are unlike random noises, instead, they are usually created dedicatedly by maximizing the loss metric. By convention, we call the people who create such adversarial perturbations as “attacker” and the side who apply the model to testset as “user”. For example, suppose the user is doing per-node classification, then it would be reasonable for attacker to maximize the negative cross-entropy loss over a testing example. The overall idea of finding adversarial perturbation can be described as a constraint optimization problem as follows

is the loss function and

f(x) is our model. S is the constraint depending of the goals of attack, two common choices are {δ|∥δ∥2≤r} and {δ|∥δ∥∞≤r}, both of them aim at creating an invisible perturbation if r is small enough.

For deep neural networks on image recognition task, there are several ways to solve Eq. (4) efficiently. The simplest one is called fast gradient sign method (FGSM) [6], where we do one step gradient descent starting from origin, that is, δ=η⋅sign(∇δJ(f(x+δ),y)), here we need to choose a step size η properly such that δ∈S. It is shown that although simple, this method is quite effective for finding an adversarial perturbation for images. Moreover, it is straightforward to improve FGSM method by running it iteratively, and that is essentially projected gradient descent (PGD) attack [15].

Ii-a Attacks and Defense on CNNs

Adversarial examples of computer vision have been studied extensively.

[6] discovered that deep neural networks are vulnerable to adversarial attacks—a carefully designed small perturbation can easily fool a neural network. Several algorithms have been proposed to generate adversarial examples for image classification tasks, including FGSM [6], IFGSM [11], C&W attack [1] and PGD attack [15]. In the black-box setting, it has also been reported that an attack algorithm can have high success rate using finite difference techniques [3, 4], and several algorithms are recently proposed to reduce query numbers [9, 18].

Adversarial training is a popular way for improving robustness. It’s based on the idea of including adversarial examples in the training phase to make neural networks robust against those examples. For instance, [15, 8, 12]

, modifying softmax layers and then use prediction probability to train “student” networks

[17]. Adding noises to images and using random self-ensemble helps with defensing white box attacks [14]. Dropping or adding edges to graphs could be viewed as mapping adding noises methods for images to graphs.

Most of the above-mentioned works are focusing on problems with continuous input space (such as images), directly applying these methods to Graph Convolutional Networks can only improves robustness marginally.

GCNs widely are used for node classification tasks, the original one is introduced in [10], after that tons of works came out. From the large scale training aspect, sampling from just a few neighbourhoods is a standard way to scale the algorithm to big datasets. Different sampling methods are introduced with different papers, such as uniform sampling [7], importance sampling [2], sampling from random walk through neighbours [23].

. And variety of aggregate functions have also been apply to GCNs, such as max pooling, LSTM, and other different pooling methods

Ii-C Attacks and Defense on GCNs

The wide applicability of GCNs motivates recent studies about their robustness. [25, 5, 21] recently proposed algorithms to attack GCNs by changing existing nodes’ links and features. [25] developed an FGSM-based method that optimizes a surrogate model to choose the edges and features that should be manipulated. [5]

[5] also showed experiments of using drop edges and adversarial training for defensing, and claimed that dropping edges is a cheap way for increasing robustness. [21] learned graphs from a continuous function for attacking, also claimed that deeper GCNs have better robustness. Recently more defense methods come out, besides adversarial training, [20] used graph encoder refining and adversarial contrasting learning, this paper explores robustness on both original GCN and GraphSAGE for small datasets, large graphs’ robustness has not been discussed yet.

Unlike previous defense work for CNN, GCN has some unique characteristics that will cause difficulties for improving robustness of GCNs.

With small labeling weight for semi-supervised learning, lack of connectivity is very common. [13] shows that using part of predicted labels as training labels could increase the accuracy for prediction when label rate is low. This gives us intuition to relief the less of transferability problem during adversarial training.

Thus, we introduce the proposed adversarial training objective function as:

where A′ is the modified adjacency matrix. For efficiency, we do not constraint elements of A′ to be discrete. The loss function J is defined as

There are different ways of getting adversarial examples: (1) adversarial perturbation that constrained in the discrete space. (2) the proposed GraphDefense perturbation in the continuous space.

To solve the inner max problem in (5

), we use gradient descent on the adjacency matrix. The time complexity overhead compared to the original backpropagation is

To scale up our attack and defense, we conduct experiments using GraphSage with GCN aggregator. The difficulties are:

In our implementation we consider the neighborhood expansion used in GraphSAGE with the GCN aggregator. The aggregator could be written as:

For large dataset adversarial training, we could still use the framework above, by only changing GCN function f to GraphSAGE aggregator agg

and using mini-batch during training. The time complexity for each epoch is

O(B∗B∗N1), where N1 is number of sampled 1-hop neighbours.

For large scale graph convolutional networks, neighborhood sampling is a common way to scale up to large graphs. The basic idea to aggregate features of 1-hop and 2-hop neighbour then doing nodes classification. This gives us an intuition for doing adversarial training faster and for large-scale graphs. We could generate adversarial features and using these features for adversarial training. We could prove that any small perturbation in discrete edge space are all included in features perturbations in continuous space. The time complexity for retraining features is in each batch O(|B∗Nfeatures|). Adversarial training on features will speedup adversarial process especially for large batch training, furthermore GCNs will also be more robust on edge perturbations. When considering modifying feature matrix X with δ perturbation, the formula of GCN in Eq 1 will be:

For ϵ perturbation on graph A, the formula of GCN in Eq 1 will be:

We conduct experiments on both single node and a group of nodes.

Table II shows defense a 100 nodes group defense using different methods, for Cora dataset, the number of changed edges is 100 for each group of 100 nodes; for Citeseer dataset, due to the graph density is lower than Cora dataset, we chose to modify 70 edges for each group of 100 nodes. Our method successfully beats naive adversarial training and dropping edges, and increases the accuracy of GCNs for more than 60 % without changing the semi-supervised learning setting.

When attacking singe nodes, for each targeted node, we modify 1 edge in the graph. Table III shows the result for single node attacks by only dropping edges, adding edges or both. We notice that in both Table II and Table III dropping edges method is the least robustness expect for original GCN. That is because adding edges are more efficient when attacking GCN, thus although dropping edges is a very fast way, the improvement of robustness is not significant compared with other methods. We also notice that for the Cora dataset, during single node attacks, discrete adversarial training is better than GraphDefense, the reason might be discrete adversarial training is more suitable for single node attacks. We will discuss this in the latter part.

Figure 1 and Figure 2 shows more details of attacking with different amount of modified edges. With the number of modified edges increases, Our GraphDefense method remains more stable than discrete adversarial samples retrain and dropping edges. To investigate deeper in the reason why these methods perform differently, we use to study the different degrees of nodes accuracy corresponding to attacks.

More Bar plots are listed in Figure 9, which shows each case how the accuracy changes before and after attacks.

For large scale data, we use GraphSAGE compare with our GraphDefense method, discrete edges adversarial training, and adversarial training on features. We did not do a comparison with discrete adversarial training and dropping edges because previous experiments show they are far away behind our method. GraphSAGE is more difficult to attack, because there is a neighbourhood sampling function in these algorithms, directly adding or deleting edges on the original graphs method becomes less effective than on GCN. The reason is when training GraphSAGE (or other large scale graph neural networks), sampling neighbourhood could be view as dropping edges during training, [5] shows that use dropping edges while training is a cheap method to increase the robustness of GCN. As a result, attacking GraphSAGE (or other large scale graph neural networks) is more difficult than attacking GCN. Also since attacking a single node by modifying only one edge is not a significant attack, in this part, we show attacking groups of 128 nodes instead.

Because the Reddit dataset is an inductive dataset, using our framework Algorithm 1 is important, otherwise, the adversarial training on the training dataset is very hard to transmit to the testing part through the edges, as the result, testing data will remain vulnerable.

In this section, we will discuss the weight between adversarial examples and clean data during the adversarial training process in Algorithm 1.