Graph Prediction in a Low-Rank and Autoregressive Setting

We study the problem of prediction for evolving graph data. We formulate the problem as the minimization of a convex objective encouraging sparsity and low-rank of the solution, that reflect natural graph properties. The convex formulation allows to obtain oracle inequalities and efficient solvers. We provide empirical results for our algorithm and comparison with competing methods, and point out two open questions related to compressed sensing and algebra of low-rank and sparse matrices. 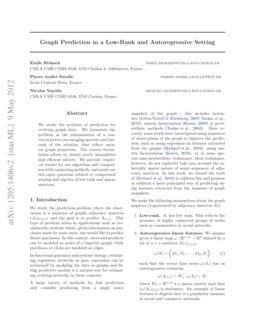 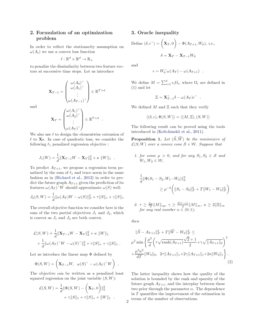 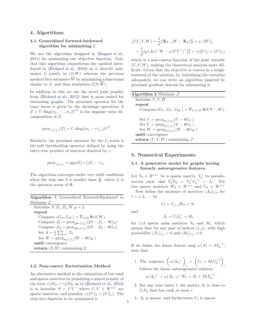 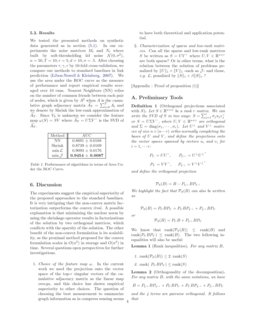 We study the prediction problem where the observation is a sequence of graphs adjacency matrices (At)0≤t≤T and the goal is to predict AT+1. This type of problem arises in applications such as recommender systems where, given information on purchases made by some users, one would like to predict future purchases. In this context, users and products can be modeled as nodes of a bipartite graph, while purchases or clicks are modeled as edges.

In functional genomics and systems biology, estimating regulatory networks in gene expression can be performed by modeling the data as graphs and fitting predictive models is a natural way for estimating evolving networks in these contexts.

. More recently, some works have investigated using sequences of observations of the graph to improve the prediction, such as using regression on features extracted from the graphs

(Richard et al., 2010), using matrix factorization (Koren, 2010), or in some special cases probabilistic techniques. Most techniques, however, do not explicitly take into account the inherently sparse nature of usual sequences of adjacency matrices. In this work, we extend the work of (Richard et al., 2010) to address this and propose in addition a more principled way of predicting using features extracted from the sequence of graph snapshots.

We make the following assumptions about the graph sequence (represented by adjacency matrices At):

2 Formulation of an optimization problem

In order to reflect the stationarity assumption on ω(At)

we use a convex loss function

to penalize the dissimilarity between two feature vectors at successive time steps. Let us introduce

We also use ℓ to design the elementwise extension of ℓ to Xs. In case of quadratic loss, we consider the following ℓ1 penalized regression objective :

To predict AT+1, we propose a regression term penalized by the sum of ℓ1 and trace norm in the same fashion as in (Richard et al., 2012) in order to predict the future graph AT+1 given the prediction of its features ω(AT)⊤W should approximate ω(S) well:

The overall objective function we consider here is the sum of the two partial objectives J1 and J2, which is convex as J1 and J2 are both convex.

Let us introduce the linear map Φ defined by

The objective can be written as a penalized least squared regression on the joint variable (S,W):

We define M=∑di=1ϵiΩi, where Ωi are defined in (1) and let

We defined M and Ξ such that they verify

The following result can be proved using the tools introduced in (Koltchinskii et al., 2011).

The latter inequality shows how the quality of the solution is bounded by the rank and sparsity of the future graph AT+1, and the interplay between these two prior through the parameter α. The dependence in T quantifies the improvement of the estimation in terms of the number of observations.

We use the algorithm designed in (Raguet et al., 2011) for minimizing our objective function. Note that this algorithm outperforms the method introduced in (Richard et al., 2010) as it directly minimizes L jointly in (S,W) whereas the previous method first estimates ˆW by minimizing a functional similar to J1 and then minimizes L(S,ˆW).

In addition to this we use the novel joint penalty from (Richard et al., 2012) that is more suited for estimating graphs. The proximal operator for the trace norm is given by the shrinkage operation, if Z=Udiag(σ1,⋯,σn)VT

is the singular value decomposition of

Similarly, the proximal operator for the ℓ1-norm is the soft thresholding operator defined by using the entry-wise product of matrices denoted by ∘:

The algorithm converges under very mild conditions when the step size θ is smaller than 2L, where L is the operator norm of Φ.

An alternative method to the estimation of low-rank and sparse matrices by penalizing a mixed penalty of the form τ∥S∥∗+γ∥S∥1 as in (Richard et al., 2012) is to factorize S=UV⊤ where U,V∈Rn×r are sparse matrices, and penalize γ(∥U∥1+∥V∥1). The objective function to be minimized is

which is a non-convex function of the joint variable (U,V,W), making the theoretical analysis more difficult. Given that the objective is convex in a neighborhood of the solution, by initializing the variables adequately, we can write an algorithm inspired by proximal gradient descent for minimizing it.

5.1 A generative model for graphs having linearly autoregressive features

for i.i.d sparse noise matrices Nt and Mt, which means that for any pair of indices (i,j)

If we define the linear feature map ω(A)=AV⊤†0, note that

We tested the presented methods on synthetic data generated as in section (5.1). In our experiments the noise matrices Mt and Nt where built by soft-thresholding iid noise N(0,σ2), n=50,T=10,r=5,d=10,σ=.5. After choosing the parameters τ,γ,r by 10-fold cross-validation, we compare our methods to standard baselines in link prediction (Liben-Nowell & Kleinberg, 2007). We use the area under the ROC curve as the measure of performance and report empirical results averaged over 10 runs. Nearest Neighbors (NN) relies on the number of common friends between each pair of nodes, which is given by A2 when A is the cumulative graph adjacency matrix ˜AT=∑Tt=0At and we denote by Shrink the low-rank approximation of ˜AT. Since V0 is unknown we consider the feature map ω(S)=SV where ˜AT=UΣV⊤ is the SVD of ˜AT.

The experiments suggest the empirical superiority of the proposed approaches to the standard baselines. It is very intriguing that the non-convex matrix factorization outperforms the convex rival. A possible explanation is that minimizing the nuclear norm by using the shrinkage operator results in factorizations of the solution by two orthogonal matrices, which conflicts with the sparsity of the solution. The other benefit of the non-convex formulation is its scalability, as the proximal method proposed for the convex formulation scales in O(n2) in storage and O(n3) in time. Several questions open perspectives for further investigations.

Let S∈Rn×n be a rank r matrix. We can write the SVD of S in two ways: S=∑rj=1σjujv⊤j or S=UΣV⊤, where U,V∈Rn×r are orthogonal and Σ=diag(σ1,⋯,σr). Let U⊥ and V⊥ matrices of size n×(n−r) ortho-normally completing the bases of U and V, and define the projections onto the vector spaces spanned by vectors ui and vi for i=1,⋯r:

and define the orthogonal projection

We know that rank(PS(B))≤rank(B) and rank(PUBPV)≤rank(B). The two following inequalities will also be useful:

For any matrix B,

Lemma 2 (Orthogonality of the decomposition).

For any matrix B, with the same notations, we have

and the 4 terms are pairwise orthogonal. It follows that

denote an element of the subgradient of the convex function S↦τ∥S∥∗+γ∥S∥1, so ∥G∗∥op≤1 and ∥G1∥∞≤1. There exist G1 and G∗ such that

The inequality (5) can be written as

We get by applying triangle inequality, Cauchy-Schwarz, Hölder inequality written for the trace-norm and ℓ1-norm

by rank and support inequalities obtained again by Cauchy-Schwarz

we can rewrite the inequality (7) as follows:

So finally, and by using again these assumptions,

and the result follows by using