A novel approach is put forth that utilizes data similarity, quantified on a graph, to improve upon the reconstruction performance of principal component analysis. The tasks of data dimensionality reduction and reconstruction are formulated as graph filtering operations, that enable the exploitation of data node connectivity in a graph via the adjacency matrix. The unknown reducing and reconstruction filters are determined by optimizing a mean-square error cost that entails the data, as well as their graph adjacency matrix. Working in the graph spectral domain enables the derivation of simple gradient descent recursions used to update the matrix filter taps. Numerical tests in real image datasets demonstrate the better reconstruction performance of the novel method over standard principal component analysis. 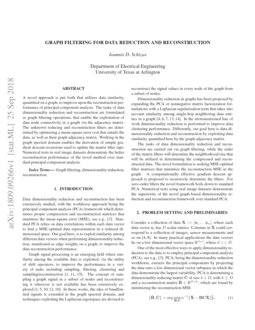 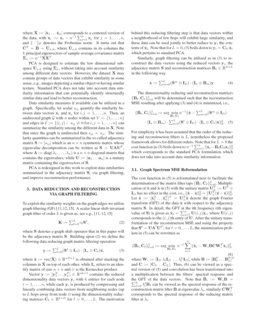 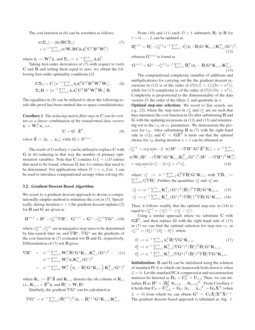 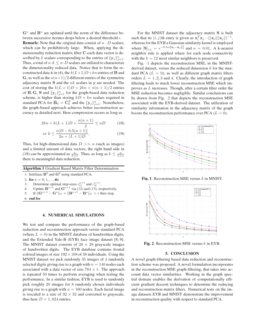 . Standard PCA relies on data correlations within each data vector to find a MSE-optimal data representation in a reduced dimensional space. Our goal here, is to exploit similarity among different data vectors when performing dimensionality reduction, manifested as edge weights on a graph, to improve the data reconstruction performance.

Graph signal processing is an emerging field where similarity among the available data is exploited, via the utility of shift operators, to improve the performance in a variety of tasks including sampling, filtering, clustering and sampling/reconstruction [2, 12, 16]. The concept of sampling a graph signal in a subset of nodes and reconstructing it wherever is not available has been extensively explored [2, 6, 11, 13, 17]

. In these works, the idea of bandlimited signals is extended in the graph spectral domain, and techniques exploiting the Laplacian eigenspace are devised to reconstruct the signal values in every node of the graph from a subset of nodes.

The tasks of data dimensionality reduction and reconstruction are carried out via graph filtering, while the order of the matrix filters will determine the neighborhood size that will be utilized in determining the compressed and reconstructed data. The novel formulation is seeking MSE-optimal filter matrices that minimize the reconstruction MSE in the graph. A computationally effective gradient descent approach is proposed to recursively determine the filters. For zero-order filters the novel framework boils down to standard PCA. Numerical tests using real image datasets demonstrate the superiority of the novel graph-based dimensionality reduction and reconstruction framework over standard PCA.

Consider a collection of data X:=[x1…xn], where each data vector xi has D scalar entries. Columns in X could correspond to a collection of images, sensor measurements and so on [9, 5]. In many practical applications the data vectors lie on a low dimensional vector space Rd×1, where d<<D.

PCA is designed to estimate the low dimensional subspace

¯Ux,k using ¯\boldmathΣx, without taking into account similarity among different data vectors. However, the dataset X may contain groups of data vectors that exhibit similarity in some sense, e.g., images depicting a similar object or having similar texture. Standard PCA does not take into account data similarity information that can potentially identify structurally similar data and lead to better reconstruction.

Data similarity measures if available can be utilized in a graph. Specifically, let scalar sij quantify the similarity between data vectors xi and xj for i,j=1,…,n. Then, an undirected graph G with n nodes within set V:={1,…,n} and edges in E:={(i,j):sij≠0 for i,j=1,…,n} can summarize the similarity among the different data in X. Note that since the graph is undirected then sij=sji. The similarity quantities can be summarized in the so called adjacency matrix S:=[sij] which is an n×n

symmetric matrix whose eigenvalue decomposition can be written as

is a unitary matrix containing the eigenvectors of

PCA is redesigned in this work to exploit data similarities summarized in the adjacency matrix S, via graph filtering, and improve reconstruction performance.

where S denotes a graph shift operator that in this paper will be the adjacency matrix S. Building upon (2) we define the following data reducing graph matrix filtering operation

where ˘x:=vec(¯X)∈RnD×1 is obtained after stacking the columns in ¯X on top of each other, while In refers to an identify matrix of size n×n and ⊗ is the Kronecker product.

Vector y:=[yT1…yTn]∈Rnk×1 contains the reduced dimensionality data vectors yi with k entries for each node i=1,…,n, while each yi is produced by compressing and linearly combining data vectors from neighboring nodes (up to L hops away from node i) using the dimensionality reducing matrices Cℓ∈Rk×D for ℓ=0,…,L. The motivation behind this reducing filtering step is that data vectors within a neighborhood of few hops will exhibit large similarity, and these data can be used jointly to better reduce to yi the contents of ¯xi. Note that for L=0, (3) boils down to yi=C0⋅¯xi which pertains to standard PCA.

Similarly, graph filtering can be utilized as in (3) to reconstruct the data vectors using the reduced vectors yi, the adjacency matrix S and reconstruction matrices Bℓ∈RD×k in the following way

The dimensionality reducing and reconstruction matrices {Bℓ,Cℓ}Lℓ=0 will be determined such that the reconstruction MSE resulting after applying (3) and (4) is minimized, i.e.,

For simplicity it has been assumed that the order of the reducing and reconstruction filters is L, nonetheless the proposed framework allows for different orders. Note that for L=0 the cost function in (3) boils down to n−1∑ni=1∥¯xi−B0C0¯xi∥22 which corresponds to the standard PCA formulation which does not take into account data similarity information.

denote the graph Fourier transform (GFT) of the data

˘x with respect to the adjacency matrix S. In detail, the GFT at the ith frequency (ith eigenvalue of S) is given as ~xi=∑nj=1U(i,j)¯xi, where U(i,j) corresponds to the (i,j)th entry of U. After the unitary transformation of the reconstruction MSE and using the property that Sℓ=U\boldmathΛℓUT, for ℓ=0,…,L, the minimization problem in (3) can be rewritten as

The cost function in (6) can be rewritten as follows

Taking first-order derivatives of (7) with respect to (wrt) C and B and setting them equal to zero, we obtain the following first-order optimality conditions [3]

The equalities in (8) can be utilized to show the following result (the proof has been omitted due to space considerations).

The reducing matrix filter taps in C can be written as a linear combination of the transformed data vectors ~zi=WTi~xi, i.e.,

The result of Corollary 1 can be utilized to replace C with G in (6) reducing in that way the number of primary optimization variables. Note that C contains k(L+1)D entries that need to be found, whereas G has kn entries that need to be determined. For applications where D>>n, Cor. 1 can be used to introduce computational savings when solving (6).

We resort to a gradient descent approach to devise a computationally simpler method to minimize the cost in (7). Specifically, during iteration κ+1 the gradient descent updates [3] for B and G are given as

where cκ+1B,cκ+1G are nonnegative step-sizes to be determined by line-search later on, and ∇Bκ, ∇Gκ are the gradients of the cost function in (7) evaluated wrt B and G, respectively. Differentiation of (7) wrt B gives

Similarly, the gradient ∇Gκ can be calculated as

whereas Gκ+1 is found as

Optimal step-size selection: We resort to line search, see e.g., [3], where the step-sizes in cκB and cκG are set such that they minimize the cost function in (6) after substituting B and G with the updating recursions in (12) and (13) and minimizing wrt to the cB or cG parameters. We demonstrate the process for cB. After substituting B in (7) with the right hand side in (12), and C=G~ZT it turns out that the optimal choice for cB during iteration κ+1 can be obtained as

Using a similar approach where we substitute C with G~ZT, and then replace G with the right hand side of (13) in (7) we can find the optimal selection for step-size cG as cκ+1G=(δκ3)−1(δκ2−δκ1), where

Initialization: B and G can be initialized using the solution of standard PCA to which our framework boils down to when L=0. Let the standard PCA compression and reconstruction matrices be denoted as ^B0=^CT0=¯Ux,k Then, we can initialize B as B0=[^BT00k×D…0k×D]T. From Corollary 1 it holds that C0=¯UTx,k=G0⋅[~x1…~xn]T=G0~XT (when L=0) from which we can obtain G0=C0~X(~XT~X)−1. The gradient descent based approach is tabulated as Alg. 1. Gκ and Bκ are updated until the norm of the difference between successive iterates drops below a desired threshold ϵ.

Remark: Note that the original data consist of n⋅D scalars, which can be prohibitively large. When, applying the dimensionality reduction matrix filter C each data vector is described by k scalars corresponding to the entries of {yj}nj=1. Thus, a total of n⋅k≤n⋅D scalars are utilized to characterize the dimensionality reduced data. Notice that to form the reconstructed data ^x in (4), the k(L+1)D+kn entries of B and G, as well as the n(n+1)/2 different entries of the symmetric adjacency matrix S and the nk scalars in y are needed. The cost of storing the k(L+1)D+2kn+n(n+1)/2 entries of B,G, S and {yj}nj=1 for the graph-based data reduction scheme, is higher than storing kD+kn scalars required in standard PCA for ^B0=^CT0 and the {yj}nj=1. Nonetheless, the graph-based approach achieves better reconstruction accuracy as detailed next. Here compression occurs as long as

D>>n (such as images) and a limited amount of data vectors, the right hand side in (18) can be approximated as nL+1. Thus, as long as k≤nL+1 there is meaningful data reduction.

) in the MNIST database of handwritten digits, and the Extended Yale-B (EYB) face image dataset

For the MNIST dataset the adjacency matrix S is built such that its (i,j)th entry is given as xTixj⋅(∥xi∥∥xj∥)−1, whereas for the EYB a Gaussian similarity kernel is employed where [S]i,j=e−0.5α∥xi−xj∥22 and α=0.01. A k-nearest neighbor rule is applied where for each node connectivity with the k=12 most similar neighbors is preserved.

A novel graph-filtering based data reduction and reconstruction scheme was proposed. A novel formulation incorporates in the reconstruction MSE graph-filtering, that takes into account data vector similarities. Working in the graph spectral domain enables the derivation of computationally efficient gradient descent techniques to determine the reducing and reconstruction matrix filters. Numerical tests on the image datasets EYB and MNIST demonstrate the improvement in reconstruction quality with respect to standard PCA.