The seam-driven approach has been proven fairly effective for parallax-tolerant image stitching, whose strategy is to search for an invisible seam from finite representative hypotheses of local alignment. In this paper, we propose a graph-based hypothesis generation and a seam-guided local alignment for improving the effectiveness and the efficiency of the seam-driven approach. The experiment demonstrates the significant reduction of number of hypotheses and the improved quality of naturalness of final stitching results, comparing to the state-of-the-art method SEAGULL. 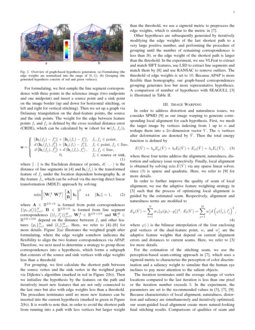 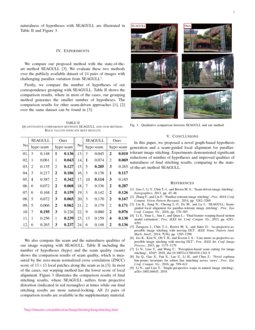 Parallax handling is a challenging task for image stitching. Global alignment usually introduces noticeable artifacts or objectionable distortion. The seam-driven approach is a powerful tool for addressing the parallax problem, which searches finite representative hypotheses of local alignment for an invisible seam for plausible and natural stitching [1, 2, 3]. The effectiveness and the efficiency depend upon the quality and the number of hypotheses of local alignment, which correspond to image warping and correspondence grouping respectively (see Figure 1).

In this paper, we propose a graph-based hypothesis generation and a seam-guided local alignment for parallax-tolerant image stitching. First, we use the as-projective-as-possible (APAP) warping and a graph-based strategy to group dual-feature correspondences into a few representative hypotheses. Then we use a single-perspective mesh deformation (SPMD) with adaptive feature weighting that depends on current seams to generate corresponding local alignment. Finally, we search a good seam from these hypotheses and create the final stitching result. Experiments demonstrate significant reductions of number of hypotheses and improved qualities of naturalness of final stitching results, comparing to SEAGULL.

For formulating, we first sample the line segment correspondence with three points in the reference image (two endpoints and one midpoint) and insert a source point and a sink point on the image border (up and down for horizontal stitching, or left and right for vertical stitching). Then we set up a graph via Delaunay triangulation on the dual-feature points, the source and the sink points. The weight for the edge between feature points fi and fj is defined by the cross residual distance error (CRDE), which can be calculated by w (short for w(fi,fj)),

where ∥⋅∥ is the Euclidean distance of points, d(⋅,⋅) is the distance of line segments in [4] and hi(fj) is the transformed feature of fj under the location dependent homography hi at the feature fi

, which can be solved via the moving direct linear transformation (MDLT) approach by solving

where A∈R2N×9 is formed from point correspondences {(pi,p′i)}Ni=1, B∈R2M×9 is formed from line segment correspondences {(lj,l′j)}Mj=1, WAi∈R2N×2N and WBi∈R2M×2M depend on the distance between fi and other features {pi}Ni=1 and {lj}Mj=1. Here, we refer to [4, 5, 6] for more details. Figure 2(a) illustrates the weighted graph after formulating, where the edge weight somehow indicates the flexibility to align the two feature correspondences via APAP. Therefore, we next need to determine a strategy to group those correspondences into a hypothesis, which forms a subgraph that consists of the source and sink vertices with edge weights less than a threshold.

For grouping, we first calculate the shortest path between the source vertex and the sink vertex in the weighted graph via Dijkstra’s algorithm (marked in red in Figure 2(b)). Then we initialize the hypothesis by the features on the path and iteratively insert new features that are not only connected to the last ones but also with edge weights less than a threshold. The procedure terminates until no more new features can be inserted into the current hypothesis (marked in green in Figure 2(b)). It is worth to note that, in order to avoid the shortest path from running into a path with less vertices but larger weight than the threshold, we use a sigmoid metric to preprocess the edge weights, which is similar to the metric in [7].

Other hypotheses are subsequently generated by iteratively modifying the edge weights of the last shortest path to a very large positive number, and performing the procedure of grouping until the number of remaining correspondences is less than 30, or the edge weight of the shortest path is larger than the threshold. In the experiment, we use VLFeat to extract and match SIFT features, use LSD to extract line segments and match them by [8]

and use RANSAC to remove outliers. The threshold of edge weights is set to

10. Because APAP is more flexible than homography, our graph-based correspondences grouping generates less but more representative hypotheses. A comparison of number of hypotheses with SEAGULL [3] is illustrated in Table II.

In order to address distortion and naturalness issues, we consider SPMD [9] as our image warping to generate corresponding local alignment for each hypothesis. First, we mesh the target image by vertices indexing from 1 up to n and reshape them into a 2n

V. The n vertices after deformation are denoted by ^V. Then the total energy function is defined by

where these four terms address the alignment, naturalness, distortion and saliency issue respectively. Finally, local alignment is obtained by solving minE(^V) via any sparse linear solver, since (3) is sparse and quadratic. Here, we refer to [9] for more details.

In order to further improve the quality of seam of local alignment, we use the adaptive feature weighting strategy in [3]

such that the process of optimizing local alignment is guided by the estimated seam. Respectively, alignment and naturalness terms are modified to

is the bilinear interpolation of the four enclosing grid vertices of the dual-feature point,

wi and w′j are the adaptive feature weights that depend on current alignment errors and distances to current seams. Here, we refer to [3] for more details.

For the estimation of the stitching seam, we use the perception-based seam-cutting approach in [7], which uses a sigmoid metric to characterize the perception of color discrimination and a saliency weight to simulate that the human eye inclines to pay more attention to the salient objects.

The iteration terminates until the average change of vertex locations compared to the last iteration is less than one pixel or the iteration number exceeds 5. In the experiment, the parameters are set to the recommended values in [3, 7, 9]. Because characteristics of local alignment, naturalness, distortion and saliency are simultaneously and iteratively optimized, our seam-guided local alignment create more natural-looking final stitching results. Comparisons of qualities of seam and naturalness of hypotheses with SEAGULL are illustrated in Table II and Figure 3.

We compare our proposed method with the state-of-the-art method SEAGULL [3]. We evaluate these two methods over the publicly available dataset of 24 pairs of images with challenging parallax variation from SEAGULL111http://linkaimo.com/publications/ImageStitching/ImageStitching.html.

We also compare the seam and the naturalness qualities of our image warping with SEAGULL. Table II including the number of hypotheses (hypo) and the seam quality (seam) shows the comparison results of seam quality, which is measured by the zero-mean normalized cross correlation (ZNCC) score of 15×15 local patches along the seam as in [3]. In most of the cases, our warping method has the lower score of local alignment. Figure 3 illustrates the comparison results of final stitching results, where SEAGULL suffers from projective distortion (indicated in red rectangles) at times while our final stitching results are more natural-looking. All 24 pairs of comparison results are available in the supplementary material.

In this paper, we proposed a novel graph-based hypothesis generation and a seam-guided local alignment for parallax-tolerant image stitching. Experiments demonstrated significant reductions of number of hypotheses and improved qualities of naturalness of final stitching results, comparing to the state-of-the-art method SEAGULL.