Full-sampling (e.g., Q-learning) and pure-expectation (e.g., Expected Sarsa) algorithms are efficient and frequently used techniques in reinforcement learning. Q(σ,λ) is the first approach unifies them with eligibility trace through the sampling degree σ. However, it is limited to the tabular case, for large-scale learning, the Q(σ,λ) is too expensive to require a huge volume of tables to accurately storage value functions. To address above problem, we propose a GQ(σ,λ) that extends tabular Q(σ,λ) with linear function approximation. We prove the convergence of GQ(σ,λ). Empirical results on some standard domains show that GQ(σ,λ) with a combination of full-sampling with pure-expectation reach a better performance than full-sampling and pure-expectation methods. 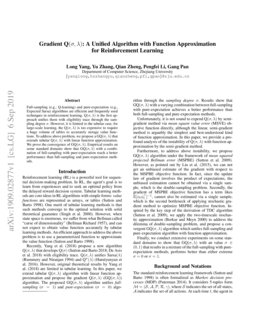 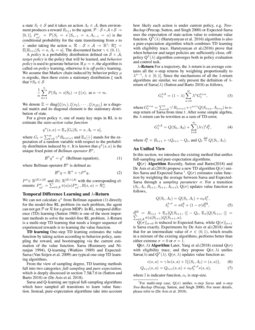 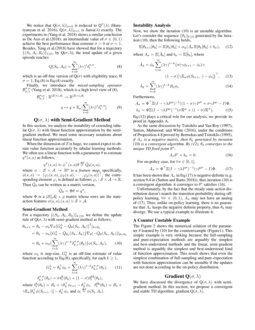 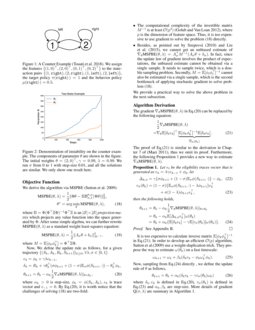 Reinforcement learning (RL) is a powerful tool for sequential decision-making problem. In RL, the agent’s goal is to learn from experiences and to seek an optimal policy from the delayed reward decision system. Tabular learning methods are core ideas in RL algorithms with simple forms: value functions are represented as arrays, or tables [16]. One merit of tabular learning methods is that such methods converge to the optimal solution with solid theoretical guarantee [15]

. However, when state space is enormous, we suffer from what Bellman called “curse of dimensionality”

[14], and can not expect to obtain value function accurately by tabular learning methods. An efficient approach to address the above problem is to use a parameterized function to approximate the value function [16].

Furthermore, to address above instability, we propose GQ(σ,λ) algorithm under the framework of mean squared projected Bellman error (MSPBE) [18]

. However, as pointed out by Liu et al. liu2015finite, we can not get an unbiased estimate of the gradient with respect to the MSPBE objective function. In fact, since the update law of gradient involves the product of expectations, the unbiased estimation cannot be obtained via a single sample, which is the double-sampling problem. Secondly, the gradient of MSPBE objective function has a term likes

E[ϕtϕ⊤t]−1, cannot also be estimated via a single sample, which is the second bottleneck of applying stochastic gradient method to optimize MSPBE objective function. Inspired by the key step of the derivation of TDC algorithm [18], we apply the two-timescale stochastic approximation [3] to address the dilemma of double-sampling problem, and propose a convergent GQ(σ,λ) algorithm which unifies full-sampling and pure-expectation algorithm with function approximation.

Finally, we conduct extensive experiments on some standard domains to show that GQ(σ,λ) with an value σ∈(0,1) that results in a mixture of the full-sampling with pure-expectation methods, performs better than either extreme σ=0 or σ=1.

The standard reinforcement learning framework [16] is often formalized as Markov decision processes (MDP) [13]. It considers 5-tuples form M=(S,A,P,R,γ), where S indicates the set of all states, A indicates the set of all actions. At each time t, the agent in a state St∈S and it takes an action At∈A, then environment produces a reward Rt+1 to the agent. P:S×A×S→[0,1], Pass′=P(St=s′|St−1=s,At−1=a)

is the conditional probability for the state transitioning from

is a probability distribution defined on

S×A, target policy is the policy that will be learned, and behavior policy is used to generate behavior. If μ=π, the algorithm is called on-policy learning, otherwise it is off-policy

learning. We assume that Markov chain induced by behavior policy

μ is ergodic, then there exists a stationary distribution ξ such that ∀S0∈S

We denote Ξ=diag{ξ(s1),ξ(s2),⋯,ξ(s|S|)} as a diagonal matrix and its diagonal element is the stationary distribution of state.

For a given policy π, one of many key steps in RL is to estimate the state-action value function

π. It is known that qπ(s,a) is the unique fixed point of Bellman operator Bπ,

where Bellman operator Bπ is defined as:

From the view of sampling degree, TD learning methods fall into two categories: full-sampling and pure-expectation, which is deeply discussed in section 7.5&7.6 in [17] or [7].

Sarsa and Q-learning are typical full-sampling algorithms which have sampled all transitions to learn value function. Instead, pure-expectation algorithms take into account how likely each action is under current policy, e.g. Tree-Backup [12] or Expected-Sarsa uses the expectation of state-action value to estimate value function. Qπ(λ) [9] algorithm is also a pure-expectation algorithm which combines TD learning with eligibility trace. Harutyunyan et al.H2016 prove that when behavior and target policies are sufficiently close, off-policy Qπ(λ) algorithm converges both in policy evaluation and control task.

λ-Return For a trajectory, the λ-return is an average contains all the n-step returns by weighting proportionally to λn−1, λ∈[0,1]. Since the mechanisms of all the λ-return algorithms are similar, we only present the definition of λ-return of Sarsa(λ) [17] as follows,

where Gt+nt=∑ni=0γiRt+i+1+γn+1Q(St+n,At+n) is n-step return of Sarsa from time t. After some simple algebra, the λ-return can be rewritten as a sum of TD-error,

In this section, we introduce the existing method that unifies full-sampling and pure-expectation algorithms.

Q(σ)|σ=0 is reduced to Expected-Sarsa, while Q(σ)|σ=1 is Sarsa exactly. Experiments by De Asis et al.de2018multi show that for an intermediate value of σ∈(0,1), which results in a mixture of the existing algorithms, performs better than either extreme σ=0 or σ=1.

where I is indicator function, αt is step-size.

Finally, we introduce the mixed-sampling operator Bπ,μσ,λ [23], which is a high level view of (8),

When the dimension of S is huge, we cannot expect to obtain value function accurately by tabular learning methods. We often use a linear function with a parameter θ to estimate qπ(s,a) as follows,

For a trajectory {(Sk,Ak,Rk)}k≥0, we define the update rule of Q(σ,λ) with semi-gradient method as follows,

where αk is step-size, Gλk is an off-line estimate of value function according to Eq.(8), specifically, for each k≥1,

Eq.(12) plays a critical role for our analysis, we provide its proof in Appendix A.

As the same discussion by Tsitsiklis and Van Roy tsitsiklis1997analysis; Sutton, Mahmood, and White sutton2016emphatic, under the conditions of Proposition 4.8 proved by Bertsekas and Tsitsiklis bertsekas1995neuro, if Aσ is a negative matrix, then θk generated by iteration (10) is a convergent algorithm. By (12), θk converges to the unique TD fixed point θ∗:

Unfortunately, by the fact that the steady state-action distribution doesn’t match the transition probability during off-policy learning, ∀σ∈(0,1), Aσ may not have an analog of (17). Thus, unlike on-policy learning, there is no guarantee that Aσ keeps the negative definite property, thus θk may diverge. We use a typical example to illustrate it.

The Figure 2 shows the numerical solution of the parameter θ learned by (10) for the counterexample (Figure1). This simple example is very striking because the full-sampling and pure-expectation methods are arguably the simplest and best-understood methods and the linear, semi-gradient method is arguably the simplest and best-understood kind of function approximation. This result shows that even the simplest combination of full-sampling and pure-expectation with function approximation can be unstable if the updates are not done according to the on-policy distribution.

We have discussed the divergence of Q(σ,λ) with semi-gradient method. In this section, we propose a convergent and stable TD algorithm: gradient Q(σ,λ).

We derive the algorithm via MSPBE [18]:

where Π=Φ(Φ⊤ΞΦ)−1Φ⊤Ξ is an |S|×|S| projection matrix which projects any value function into the space generated by Φ. After some simple algebra, we can further rewrite MSPBE(θ,λ) as a standard weight least-squares equation:

is trace vector and

We provide a practical way to solve the above problem in the next subsection.

The gradient ∇θMSPBE(θ,λ) in Eq.(20) can be replaced by the following equation:

The proof of Eq.(21) is similar to the derivation in Chapter 7 of [11], thus we omit its proof. Furthermore, the following Proposition 1 provides a new way to estimate ∇θMSPBE(θ,λ).

Let et be the eligibility traces vector that is generated as ek=λγek−1+ϕk, let

then the following holds,

It is too expensive to calculate inverse matrix E[ϕkϕ⊤k]−1 in Eq.(21). In order to develop an efficient O(p) algorithm, Sutton et al.sutton2009fast_a use a weight-duplication trick. They propose the way to estimate ω(θk) on a fast timescale:

Now, sampling from Eq.(24) directly , we define the update rule of θ as follows,

We need some additional assumptions to present the convergent of Algorithm 1.

have uniformly bounded second moments, where

ϕt=ϕ(St),ϕt+1=ϕ(St+1). (2)The reward function has uniformly bounded second moments. (3)There exists a bounded region Dθ×Dω, such that ∀(θ,ω)∈Dθ×Dω.

Assumption 2 guarantees that the matrices Aσ and M, and vector bσ are uniformly bounded. After some simple algebra, we have Aσ=E[ekΔk,σ], see Appendix C. The following Assumption 3 implies A−1σ is well-defined.

The Lemma 1 requires us to verify the following 4 steps.

Step 1: (Verifying the condition A2) Both of the functions G and H are Lipschitz functions.

By Assumption 2-3, Aσ, b and M are uniformly bounded, thus it is easy to check G and H are Lipschitz functions.

Step 3: (Verifying the condition A4) For each θ∈Rp, the ODE ˙ω(t)=H(ω(t),θ) has a unique global asymptotically stable equilibrium Ω(θ) such that: Ω(θ):Rp→Rk is Lipschitz.

Assumption 3 implies that M is a positive definite matrix, thus, for ODE (35), origin is a globally asymptotically stable equilibrium. Thus, for a fixed θ, by Assumption 3,

Step 4: (Verifying the condition A5) The ODE ˙θ(t)=G(Ω(θ(t)),θ(t)) has a unique global asymptotically stable equilibrium θ∗.

By Assumption 2-3, Aσ is invertible and M−1 is positive definition, thus A⊤σM−1Aσ is a positive defined matrix. Thus the ODE (37) has unique global asymptotically stable equilibrium: origin point. Now, let’s consider the iteration (26)/(31) associated with the ODE ˙θ(t)=(γE[σϕk+1+(1−σ)Eπ[ϕ(Sk+1,⋅)]]e⊤kM−1−I)E[δkek|θ(t)], which can be rewritten as follows,

is the unique global asymptotically stable equilibrium of ODE (39).

Since then, we have verified all the conditions of Lemma 1, thus the following almost surely

In this section, we test both policy evaluation and control capability of the proposed GQ(σ,λ) algorithm and validate the trade-off between full-sampling and pure-expectation on some standard domains. In this section, for all experiments, we set the hyper parameter σ as follows, σ∼N(μ,0.012), where μ ranges dynamically from 0.02 to 0.98 with step of 0.02, and N(⋅,0.012)

is Gaussian distribution with standard deviation

0.01. In the following paragraph, we use the term dynamic σ to represent the above way to set σ.

Domains  Baird Star is a well known example for divergence in off-policy TD learning, which considers 7-state S={s1,⋯,s7} and A= {dashed, solid}. The behavior policy μ selects the dashed and solid actions with μ(dashed|⋅)=67 and μ(solid|⋅)=17. The target policy always takes the solid: π(solid|⋅)=1.

The second benchmark MDP is the classic chain example from [5], which considers a chain of 14 states S={s1,⋯,s14}. Each transition from state si results in state si+1 or si+2 with equal probability and a reward of −3. The behavior policy we chose is random.

For the limitation of space, we provide more details of the dynamics of Boyan Chain and Baird Star, chosen policy and features in Appendix E.

Cart-Pole balancing is widely used for many RL tasks. According to  [6], the target policy we use in this section is the optimal policy π∗(a|s)=<span class