In this paper, we propose and analyze a gradient flow based Kohn-Sham density functional theory. First, we prove that the critical point of the gradient flow based model can be a local minimizer of the Kohn-Sham total energy. Then we apply a midpoint scheme to carry out the temporal discretization. It is shown that the critical point of the Kohn-Sham energy can be well-approximated by the scheme. In particular, based on the midpoint scheme, we design an orthogonality preserving iteration scheme to minimize the Kohn-Sham energy and show that the orthogonality preserving iteration scheme produces approximations that are orthogonal and convergent to a local minimizer under reasonable assumptions. Finally, we report numerical experiments that support our theory. 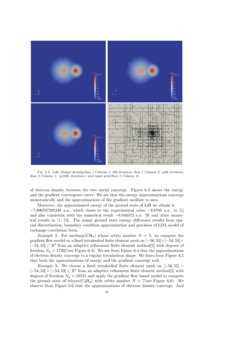 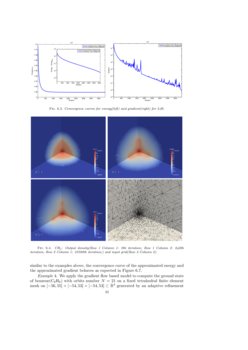 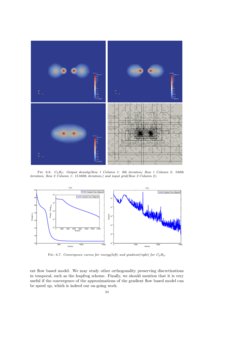 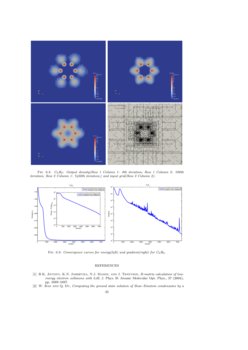 Kohn-Sham density functional theory (DFT) is the most widely used model in electronic structure calculations [19]. We see that to solve the Kohn-Sham equation, which is a nonlinear eigenvalue problem, some self-consistent field (SCF) iterations are demanded [7, 9, 22]. However, the convergence of SCF iterations is not guaranteed, especially for large scale systems with small band gaps, for which the performance of the SCF iterations is unpredictable [8, 32]. It has been shown by numerical experiments that the SCF iterations usually converge for systems with larger gap between the occupied orbitals and the remainder [31]. We understand that there are a number of works trying to illustrate this phenomenon and see that SCF iterations do converge if the gap is uniformly large enough locally or globally [4, 16, 17, 31].

In order to obtain approximations of the Kohn-Sham DFT that are convergent, in recent two decades, people pay much attention to study the direct energy minimization model. Instead of solving the Kohn-Sham equation, people minimize the Kohn-Sham total energy under an orthogonality constraint [8, 12, 16, 17, 24, 25, 26, 27, 28, 32, 33]. It is shown in [23] that a monotonic optimization approach may produce a locally convergent approximations. We observe that the iterations based on the optimization should be carefully carried out due to the orthogonality constraint, for which the existing methods are indeed either retraction (see, e.g., [8, 32]) or manifold path optimization approaches (see, e.g., [8, 28, 32]). We see that some backtracking should be applied in a monotonic optimization method, due to not only theory but also practice.

for the ground state of Bose-Einstein condensate (which requires the smallest eigenvalue and its associated eigenfunction only). We point out that our gradient flow based model is different from the gradient flow model proposed in

[23] for the Kohn-Sham DFT, in which the numerical scheme is either the retraction approach or the manifold path approach.

We organize the rest of the paper as follows. In section 2, we introduce some necessary notation and the Kohn-Sham DFT models. Then we come up with our gradient flow based model and prove its local convergence and convergence rate of the asymptotic behaviours in section 3. In section 4, we propose a midpoint scheme to realize temporal discretization of the gradient flow based model and investigate the relevant properties including preserving orthogonality automatically, updating inside the manifold as well as the local convergence. Based on the midpoint scheme, in section 5, we design and analyze an orthogonality preserving iteration scheme for solving the discretized Kohn-Sham energy. In section 6, we provide numerical experiments that support our theory. Finally, we present some concluding remarks.

In this section, we introduce some basic notation and the Kohn-Sham models.

and use Sobolev space H1(R3)

We then introduce the Stiefel manifold defined as

We define an equivalent relation “∼” on MN as

and get a Grassmann manifold, which is a quotient of MN

We introduce an equivalent class of U∈MN by

an inner product as

together with an associated norm

We define a closed δ-neighborhood of U by

For simplicity, we use notation

where E(U) is the Kohn-Sham energy

is the associated electron density with fi being the occupation number of the i-th orbital and F=diag(f1,f2,…,fN). Vext(r) is the external potential generated by the nuclei: for full potential calculations,

ZI and RI are the nuclei charge and position of the I-th nuclei respectively; while for pseudo potential approximations, the formula for the energy is still (8) (see, e.g., [8]). The fourth term in (8) is the exchange-correlation energy, to which some approximations, such as LDA(Local Density Approximation), GGA(General Gradient Approximation) and so on[18, 20], should be applied. We assume that E(U) is bounded from below with orthogonality constraint of U, which is of physics. For simplicity, we consider the case of F=2IN.

We see that for any U∈MN and all P∈ON, there hold

Instead we consider an optimization problem on GN

To introduce the gradient on GN, we suppose

We may write the gradient of E(U) as

To propose a gradient flow based model preserving orthogonality, we need to extend the domain of ∇GE(U) from MN to (H1(R3))N. We then define extended gradient ∇GE(U):(H1(R3))N⟶(H−1(R3))N as follows

and the Hessian of E(U) on GN is

If U∈(VNg)N, then we may view ∇E(U)∈(VNg)N in the sense of isomorphism and

In this section, we propose and analyze a gradient flow based model.

where U(t)∈(VNg)N and U0∈MN. We see that (20) is different from the standard gradient flow model presented in [23], which applies the ∇GE(U) in (14) rather than (19). We point out that whether the solution of (14) keeps on the Stiefel manifold is unclear. However, we see from Proposition 3.1 that our new ∇GE(U) defined by (19) guarantees that the solution keeps on the Stiefel manifold. Namely, (20) is an orthogonality preserving model whenever the initial is orthogonal.

The solution of (20) satisfies U(t)∈MN. Moreover, there holds

A direct calculation shows that

due to ⟨U0⊤U0⟩=IN. Consequently, we see from Lemma 3.1 that

We denote Lagrange function of (11)

for U∈(VNg)N and Λ∈RN×N, then the corresponding first-order necessary condition is as follows

Obviously, for such a critical point, we have

Thus we see that such a critical point may be a local minimizer.

As t→∞, we know that energy E(U(t)) decreases monotonically, thus limt→∞ E(U(t)) exists provided that E(U(t)) is bounded from below. The following statement tells us the asymptotical behavior of the extended gradient flow(c.f. [13]). If U(t) is a solution of (20), then

We see from Proposition 3.1 that

Since ∣∣∣∣∣∣∇GE(U(t))∣∣∣∣∣∣2 is nonnegative function, we have

If the initial value satisfies

Clearly, there exists P(t)∈ON that

Indeed, we may have some convergence rate. If E(U0)⩽E1 and

which together with Lemma 3.1 leads to

Note that Theorem 3.2 implies that there exists ^T>0 such that

Using Grönwall’s inequality we arrive at

Therefore, for all t≥^T, there hold

We understand that (29) has been already applied in [8, 23]. We observe that σ in (29) is related to the gap between the (N+1)-th eigenvalue and the N-th eigenvalue of the Kohn-Sham equation.

and consider a midpoint scheme as follows

Our midpoint scheme is an implicit method and we will propose and analyze a practical scheme to solve (38) in the next section.

First, we investigate the existence of the solution of (38) in a neighborhood of U∗, which requires that ∇E(U) is Lipschitz continuous locally

we see from implicit function theory that there exists a unique function g:B(U∗,δa)×[−δ∗,δ∗]→B(U∗,δb) which satisfies H(U,g(U,s),s)=0 for some δa,δb,δ∗>0. Thus we complete the proof.