In this survey, we discuss several different types of gradient boosting algorithms and illustrate their mathematical frameworks in detail: 1. introduction of gradient boosting leads to 2. objective function optimization, 3. loss function estimations, and 4. model constructions. 5. application of boosting in ranking. 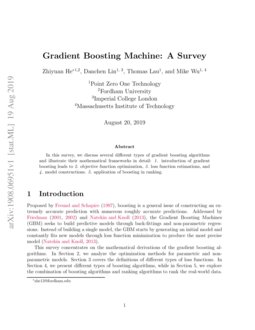 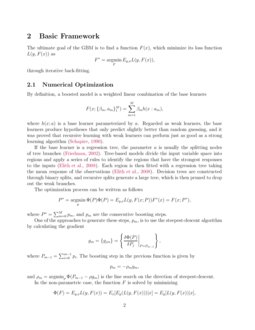 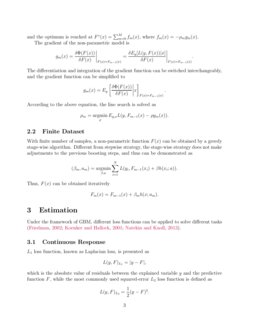 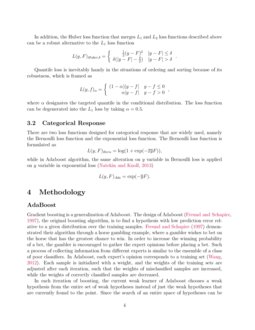 Proposed by Freund and Schapire (1997), boosting is a general issue of constructing an extremely accurate prediction with numerous roughly accurate predictions. Addressed by Friedman (2001, 2002) and Natekin and Knoll (2013), the Gradient Boosting Machines (GBM) seeks to build predictive models through back-fittings and non-parametric regressions. Instead of building a single model, the GBM starts by generating an initial model and constantly fits new models through loss function minimization to produce the most precise model (Natekin and Knoll, 2013).

The ultimate goal of the GBM is to find a function F(x), which minimize its loss function L(y,F(x)) as

By definition, a boosted model is a weighted linear combination of the base learners

where h(x;a) is a base learner parameterized by a. Regarded as weak learners, the base learners produce hypotheses that only predict slightly better than random guessing, and it was proved that recursive learning with weak learners can perform just as good as a strong learning algorithm (Schapire, 1990).

If the base learner is a regression tree, the parameter a is usually the splitting nodes of tree branches (Friedman, 2002). Tree-based models divide the input variable space into regions and apply a series of rules to identify the regions that have the strongest responses to the inputs (Elith et al., 2008). Each region is then fitted with a regression tree taking the mean response of the observations (Elith et al., 2008)

. Decision trees are constructed through binary splits, and recursive splits generate a large tree, which is then pruned to drop out the weak branches.

The optimization process can be written as follows

where P∗=∑Mm=0pm, and pm are the consecutive boosting steps.

One of the approaches to generate these steps, pm, is to use the steepest-descent algorithm by calculating the gradient

where Pm−1=∑m−1i=0pi. The boosting step in the previous function is given by

and ρm=argminρΦ(Pm−1−ρgm) is the line search on the direction of steepest-descent.

In the non-parametric case, the function F is solved by minimizing

The gradient of the non-parametric model is

According to the above equation, the line search is solved as

With finite number of samples, a non-parametric function F(x) can be obtained by a greedy stage-wise algorithm. Different from stepwise strategy, the stage-wise strategy does not make adjustments to the previous boosting steps, and thus can be demonstrated as

Thus, F(x) can be obtained iteratively

Under the framework of GBM, different loss functions can be applied to solve different tasks (Natekin and Knoll, 2013; Koenker and Hallock, 2001; Friedman, 2002).

L1 loss function, known as Laplacian loss, is presented as

which is the absolute value of residuals between the explained variable y and the predictive function F, while the most commonly used squared-error L2 loss function is defined as

Quantile loss is inevitably handy in the situations of ordering and sorting because of its robustness, which is framed as

where α designates the targeted quantile in the conditional distribution. The loss function can be degenerated into the L1 loss by taking α=0.5.

demonstrated their algorithm through a horse gambling example, where a gambler wishes to bet on the horse that has the greatest chance to win. In order to increase the winning probability of a bet, the gambler is encouraged to gather the expert opinions before placing a bet. Such a process of collecting information from different experts is similar to the ensemble of a class of poor classifiers. In Adaboost, each expert’s opinion corresponds to a training set

In each iteration of boosting, the current weak learner of Adaboost chooses a weak hypothesis from the entire set of weak hypotheses instead of just the weak hypotheses that are currently found to the point. Since the search of an entire space of hypotheses can be enormous amount of work, it is often suitable to apply weak learners that approximately cover the whole set (Collins et al., 2002).

Boosting algorithms with certain modifications perform well under high bias and high variance settings. When weighted sampling is implemented for the training data, the performance of boosting is determined by its ability to reduce variance

Additionally, Adaboost is prone to cause model overfitting because of the exponential loss. The overfitting may be mitigated by minimizing the normalized sigmoid cost function in exchange (Mason et al., 2000),

In the above function, F is a convex combination of weak hypotheses, and the parameter λ measures the steepness of the margin cost function c(z)=1−tanh(λz). Through their experiments, Mason et al. (2000) showed that a new boosting algorithm optimizing normalized sigmoid cost, called DOOM II, overall performed better than Adaboost. According to Mason et al. (1999), AnyBoost is a general boosting algorithm that optimize gradient descent in an inner product space. The inner product space S, which is inclusive of all linear combinations of weak hypotheses, contains the weak hypotheses and their combination F. The inner product can thus be represented as,

Arcing, a concept introduced by Breiman (1996) and utilized in Adaboost, is a technique to adaptively reweighting the training samples. Arc-x4 (Breiman, 1997) performs similarly to the original boosting in training error and generalization error reduction. At each boosting step, a new training sample is generated from the training set with probability

where m(n) is the number of misclassified cases.

Solving for F(x), we obtain a stage-wise model

Another well-known boosting Algorithm is Logitboost. Similar to other boosting algorithms, Logitboost adopts regression trees as the weak leaners. Deriving from the logistic regression, Logitboost takes the negative of the loglikelihood of class probabilities

(Li, 2012). Defined as p, class probability is formulated as

is the output vector and

Xi is the input vector. Thus, the loss function of Logitboost can be written out

where v is a shrinkage parameter, and fi,k is the objective function.

Beside the class probabilities, another important factor in Logitboost is the dense Hessian matrix, which is obtained by computing the tree split gain and node value fitting. However, certain modifications are required in order to incorporate these factors into optimization. The sum-to-zero constraint of classifier, implied by the sum-to-one constraint of the class probabilities, can be settled by adopting a vector tree at each boost. In the vector tree, a sum-to-zero vector is fitted at each split node in the K-dimensional space. Moreover, adding the vector tree allows explicit computations of the split gain and node fitting, which becomes a secondary problem when fitting a new tree. Such secondary problems can then be used to cope with the dense Hessian matrix, where only two coordinates are allowed for each of the secondary problems (Sun et al., 2012).

Moreover, in the LAD regression, the gamma parameter is

M-Regresison (Friedman, 2002) is designed to incorporate with the Huber loss function

where the line search of the multi-class logistic regression is

One of the most discussed problems in machine learning is teaching a computer to rank. Two sets of data are required before constructing a ranking algorithm

(Zheng et al., 2008), i.e., the preference data containing a set of features, and the ranked targets. Based on these two datasets, the ranking function can be computed for each dataset under an optimization problem.

The objective function for the ranking problem is

where xi and yi are the features in the preference data, and h(xi)≤h(yi)+τ, if xi is ranked higher than yi.

where r(j) represents the ranking of the targets. Gamma gradient is used in the optimization

where Sij takes the value of 1 or -1 depending on the relevance of the items. For example, in ranking for webpages, the gamma gradient is used to determine the relevance of information retrieved online. If a piece of information i is more relevant than another piece j, then Sij equals to 1; otherwise Sij equals to -1. The oij represents the difference between the ranking scores predicted by the ranking function oij\coloneqqF(xi)−F(xj), and Cij\coloneqqC(oij)=F(xj)−F(xi)+log(1+esi−sj). Moreover, the gamma gradient of a specific item i is as follows

In this paper, we summarize the Gradient Boosting Algorithms from several aspects, including the general function optimization, the objective functions, and different loss functions. Additionally, we present a set of boosting algorithms with unique loss functions, and we solve their predictive models accordingly.