Based on a class of associative algebras with zero-divisors which are called real-like algebras by us, we introduce the concept of the graded automatic differentiation induced a real-like algebra and present a new way of doing automatic differentiation to compute the first, the second and the third derivatives of a function exactly and simultaneously. 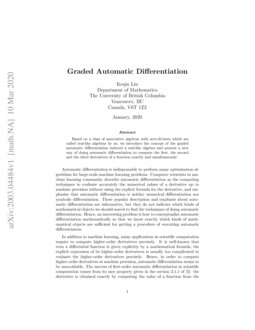 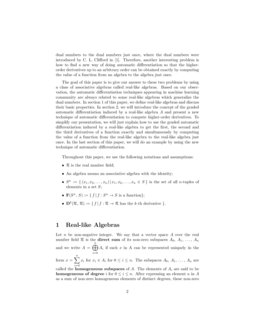 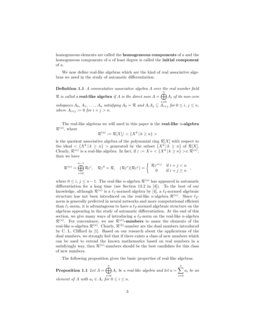 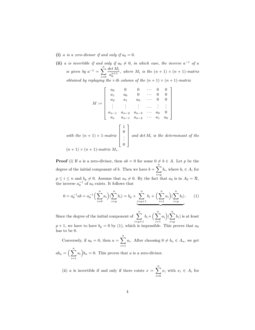 be non-negative integer. We say that a vector space

We now define real-like algebras which are the kind of real associative algebras we need in the study of automatic differentiation.

A commutative associative algebra A over the real number field R is called a real-like algebra if A is the direct sum A=n⨁i=0Ai of its non-zero subspaces A0, A1, …, An satisfying A0=R and AiAj⊆Ai+j for 0≤i,j≤n, where Ai+j:=0 for i+j>n.

ℓ1-norm, it is advantageous to have a ℓ2-normed algebraic structure on the algebras appearing in the study of automatic differentiation. At the end of this section, we give many ways of introducing a ℓ2-norm on the real-like n-algebra R(n). For convenience, we use R(n)-numbers to name the elements of the real-like n-algebra R(n). Clearly, R(2)-number are the dual numbers introduced by C. L. Clifford in [1]. Based on our research about the applications of the dual numbers, we strongly feel that if there exists a class of new numbers which can be used to extend the known mathematics based on real numbers in a satisfyingly way, then R(n)-numbers should be the best candidate for this class of new numbers.

The following proposition gives the basic properties of real-like algebras.

Since the degree of the initial component of is at least p+1, we have to have bp=0 by (1), which is impossible. This proves that a0 has to be 0.

To study the norm algebraic structure of a real-like algebra, we introduce the concept of a homogeneous norm algebra in the following

We say that a real-like algebra A=n⨁i=0Ai has a homogeneous norm ||∗ if ||∗:n⋃i=0Ai→R is a function on the set n⋃i=0Ai of homogeneous elements of A such that for r∈R, xi∈Ai, yj∈Aj and 0≤i,j≤n:

Let A=n⨁i=0Ai be a real-like algebra which has a homogeneous norm ||∗:n⋃i=0Ai→R. Mimicking the definitions of the ordinary ℓ1-norm and ℓ2-norm on Rn, we have the following natural extensions ||||1:A→R and ||||2:A→R of the function ||∗:n⋃i=0Ai→R:

where a=n∑i=0ai∈A with ai∈Ai for 0≤i≤n. The following proposition gives the basic properties of the two real-valued functions ||||1 and ||||2,∗.

If |e|∗=1 for the identity e of the algebra A, then A can not be made into a normed algebra via the real-valued function ||||2,∗.

Also, A is called a normed algebra if there is a norm |||| on A such that

The proof of Proposition 1.2 follows from direct computations. We now proof (ii) to explain the way of doing the computation. Let 0≠a1∈A1. Then

Let β be a positive constant real numbers. If ||||β:R(n+1)→R is the non-negative real valued function defined by

We now prove that

The following definition is our way of conceptualizing automatic differentiation mathematically.

and the map Γi:A→R for i∈{1,2,…,k}, which is called the i-th derivative map, has the following property:

We now explain how to get the graded automatic differentiation induced by R(4) on D3(R,R).

The following theorem, which is the main theorem of this paper, presents the new technique of automatic differentiation to compute the first, the second and the third derivatives exactly and simultaneously.