Grad-CAM: Why did you say that?

We propose a technique for making Convolutional Neural Network (CNN)-based models more transparent by visualizing input regions that are 'important' for predictions -- or visual explanations. Our approach, called Gradient-weighted Class Activation Mapping (Grad-CAM), uses class-specific gradient information to localize important regions. These localizations are combined with existing pixel-space visualizations to create a novel high-resolution and class-discriminative visualization called Guided Grad-CAM. These methods help better understand CNN-based models, including image captioning and visual question answering (VQA) models. We evaluate our visual explanations by measuring their ability to discriminate between classes, to inspire trust in humans, and their correlation with occlusion maps. Grad-CAM provides a new way to understand CNN-based models. We have released code, an online demo hosted on CloudCV, and a full version of this extended abstract. 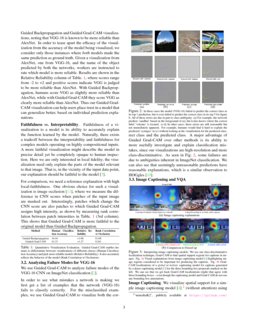 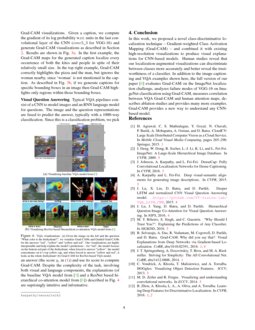 There has been a rapid progress in the task of Visual Question Answering...
Vardaan Pahuja, et al. ∙

We propose a CNN based technique that aggregates feature maps from its m...
Sumeet Shinde, et al. ∙

Convolutional Neural Networks (CNNs) and other deep networks have enabled unprecedented breakthroughs in a variety of computer vision tasks, from image classification to image captioning and visual question answering. While these deep neural networks enable superior performance, their lack of decomposability into

intuitive and understandable components makes them hard to interpret. Consequently, when today’s intelligent systems fail, they fail spectacularly disgracefully, without warning or explanation, leaving a user staring at incoherent output, wondering why the system did what it did. In order to build trust in intellegent systems and move towards their meaningful integration into our everyday lives, it is clear that we must build ‘transparent’ models that explain why they predict what they do.

However, there is a trade-off between accuracy and simplicity/interpretability. Classical rule-based or expert systems were highly interpretable but not very accurate (or robust). Decomposable pipelines where each stage is hand-designed are thought to be more interpretable as each individual component assumes a natural intuitive explanation. This tradeoff is realized in more recent work, like Class Activation Mapping (CAM) [12], which allows explanations for a specific class of image classification CNNs. By using deep models, we sacrifice a degree of interpretability in pipeline modules in order to achieve greater performance through greater abstraction (more layers) and tighter integration (end-to-end training).

This is illustrated in Fig. 1

, where we visualize the ‘tiger cat’ class. Pixel-space gradient visualizations such as Guided Backpropagation

In this abstract: (1) We propose Gradient-weighted Class Activation Mapping (Grad-CAM) to generate visual explanations from any CNN-based network without requiring architectural changes. (2) To illustrate the broad applicability of our technique across tasks, we apply Grad-CAM to state-of-the-art image captioning and visual question answering models. (3) We design and conduct human studies to show that Guided Grad-CAM explanations are class-discriminative and help humans not only establish trust, but also help untrained users successfully discern a ‘stronger’ deep network from a ‘weaker’ one even when both networks make identical predictions, simply on the basis of their visual explanations. (4) Our code and demos of Grad-CAM are released to help others apply Grad-CAM to interpret their own models.

We review Class Activation Mapping (CAM) [12], propose Grad-CAM, and combine Grad-CAM with high-resolution visualizations to form Guided Grad-CAM. This is summarized by Fig. 1.

. These feature maps are then spatially pooled using Global Average Pooling (GAP) and linearly transformed to produce a score

yc for each class c

To produce a localization map LcCAM∈Ru×v for class c, CAM computes the linear combination of the final feature maps using the learned weights of the final layer: LcCAM=∑kwckAk. This is normalized to lie between 0 and 1 for visualization purposes. CAM can not be applied to networks which use multiple fully-connected layers before the output layer, so fully-connected layers are replaced with convolutional ones and the network is re-trained. In comparison, our approach can be applied directly to any CNN-based differentiable architecture as is without re-training.

Gradient-weighted Class Activation Mapping. In order to obtain the class-discriminative localization map Grad-CAM LcGrad-CAM{}∈Ru×v in generic CNN-based architectures, we first compute the gradient of yc with respect to feature maps A of a convolutional layer, \delyc\delAkij. These gradients are global-average-pooled to obtain weights αck:

This weight αck represents a partial linearization of the deep network downstream from A, and captures the ‘importance’ of feature map k for a target class c. In general, yc

need not be a class score, but could be any differentiable activation. As in CAM, our Grad-CAM heat-map is a weighted combination of feature maps, but we follow this by a ReLU:

This results in a coarse heat-map, which is normalized for visualization. Other than the ReLU in (3), Grad-CAM is a generalization of CAM (wck are precisely αck

where CAM can be applied) blackto any CNN-based architecture (CNNs with fully-connected-layers, ResNets, CNNs stacked with Recurrent Neural Networks (RNNs) .).

Guided Grad-CAM. In order to combine the class-discriminative nature of Grad-CAM and the high-resolution nature of Guided Backpropagation, we fuse them via point-wise multiplication to create Guided Grad-CAM, shown on the left of fig:approach. We expect the last convolutional layers to have the best compromise between high-level semantics and detailed spatial information, so we use these feature maps to compute Grad-CAM and Guided Grad-CAM.

We evaluate our visualization then show image captioning and visual question answering examples.

Evaluating Class Discrimination. Intuitively, a good prediction explanation is one that produces discriminative visualizations for the class of interest. We select images from PASCAL VOC 2007 val set that contain exactly two annotated categories, and create visualizations for one of the classes. These are shown to workers on Amazon Mechanical Turk (AMT), who are asked “Which of the two object categories is depicted in the image?” and presented with the two categories present in the original image as options. blackAs shown in tab:eval_vis column 1, human subjects can correctly identify the category being visualized substantially more often when using Grad-CAM. This makes Guided Backpropagation more class-discriminative.

Faithfulness Interpretability. Faithfulness of a visualization to a model is its ability to accurately explain the function learned by the model. Naturally, there exists a tradeoff between the interpretability and faithfulness for complex models operating on highly compositional inputs. A more faithful visualization might describe the model in precise detail yet be completely opaque to human inspection. Here we are only interested in local fidelity; the visualization need only explain the parts of the model relevant to that image. That is, in the vicinity of the input data point, our explanation should be faithful to the model [7].

For comparison, we need a reference explanation with high local-faithfulness. One obvious choice for such a visualization is image occlusion [11], where we measure the difference in CNN scores when patches of the input image are masked out. Interestingly, patches which change the CNN score are also patches to which Guided Grad-CAM assigns high intensity, black as shown by measuring rank correlation between patch intensities in tab:eval_vis (3rd column). This shows that Guided Grad-CAM is more faithful to the original model than Guided Backpropagation.

In order to see what mistakes a network is making we first get a list of examples that the network (VGG-16) fails to classify correctly. For the misclassified examples, we use Guided Grad-CAM to visualize both the correct class and the predicted class. A major advantage of Guided Grad-CAM over other methods is its ability to more usefully investigate and explain classification mistakes, since our visualizations are high-resolution and more class-discriminative. As seen in fig:failures, some failures are due to ambiguities inherent in ImageNet classification. We can also see that seemingly unreasonable predictions have reasonable explanations, which is a similar observation to HOGgles

(without attention) using Grad-CAM visualizations. Given a caption, we compute the gradient of its log probability units in the last convolutional layer of the CNN (

conv5_3 for VGG-16) and generate Grad-CAM visualizations as described in sec:approach. Results are shown in Fig. 2(a). In the first example, the Grad-CAM maps for the generated caption localize every occurrence of both the kites and people in spite of their relatively small size. In the top right example, Grad-CAM correctly highlights the pizza and the man, but ignores the woman nearby, since ‘woman’ is not mentioned in the caption. As described in Fig. 2(b), if we generate captions for specific bounding boxes in an image then Grad-CAM highlights only regions within those bounding boxes.

Visual Question Answering. Typical VQA pipelines consist of a CNN to model images and an RNN language model for questions. The image and the question representations are fused to predict the answer, typically with a 1000-way classification.

Since this is a classification problem, we pick an answer (the score yc in (1)) and use its score to compute Grad-CAM. Despite the complexity of the task, involving both visual and language components, the explanations (of the baseline VQA model from [5]

and a ResNet based hierarchical co-attention model from

[6]) described in Fig. 4 are suprisingly intuitive and informative.

In this work, we proposed a novel class-discriminative localization technique – Gradient-weighted Class Activation Mapping (Grad-CAM) – and combined it with existing high-resolution visualizations to produce visual explanations for CNN-based models. Human studies reveal that our localization-augmented visualizations can discriminate between classes more accurately and better reveal the trustworthiness of a classifier. In addition to the image captioning and VQA examples shown here, the full version of our paper [8] evaluates Grad-CAM on the ImageNet localization challenge, analyzes failure modes of VGG-16 on ImageNet classification using Grad-CAM, measures correlation between VQA Grad-CAM and human attention maps, describes ablation studies and provides many more examples. Grad-CAM provides a new way to understand any CNN-based model.