Gödel's Sentence Is An Adversarial Example But Unsolvable 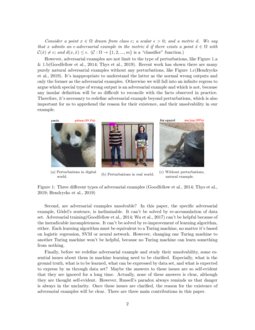 is a “classifier” function.)

Finally, before we redefine adversarial example and study their unsolvability, some essential issues about them in machine learning need to be clarified. Especially, what is the ground truth, what is to be learned, what can be expressed by data set, and what is expected to express by us through data set? Maybe the answers to these issues are so self-evident that they are ignored for a long time. Actually, none of these answers is clear, although they are thought self-evident. However, Russell’s paradox always reminds us that danger is always in the unclarity. Once these issues are clarified, the reason for the existence of adversarial examples will be clear. There are three main contributions in this paper.

Recent work has also made encouraging progress to clarify some essential issues about adversarial examples. What can be expressed by data set? More technically, what is the meaning of label in data set? The extraordinary work in Ghorbani et al. (2019) shows the difference between “basketball” and basketball, the former is a meaningless label in data set, and the latter is a word meaning a sphere or a sport. It’s shown that the most important concept for predicting “basketball” images is the players’ jerseys rather than the ball itself. Moreover, even if there are only the basketball jerseys without ball itself in a image, it can still be classified as the class “basketball”. What is to be learned? The remarkable work in Ilyas et al. (2019) shows that what are learned by machine can be non-robust features, but what human can understand and will want machine to learn are robust features, however they are both in data set, and adversarial example is a natural consequence of the presence of highly predictive but non-robust features in standard data sets.

To interpret what can be expressed by data set and reveal that it’s quite different from what is expected to express by us through data set, we need to figure out what the label in data set means, which is crucial for us to understand why there can be different explanations that can all explain data set. Here is a binary classification problem for cats and dogs.

The data set is in Figure 2. If we were native English speakers, we would adopt the label of type1. And, where are cats?

To answer this question, we need to detail the current machine learning paradigm. All we have are the data set and learning algorithm. The data set is divided into two (or three) parts, one of them is used to train by learning algorithm, another one of them is used to test. However, there is no cat in the data set, and nobody can learn something from nothing. The good performance on test set means it performs well to distinguish “cat” from “dog”. But the “cat” and “dog” is not the same thing as the cat and dog we know, the former can meow and the latter can bark. For instance, as a well-known example of algorithmic bias, Google identifies black people as gorillas (Crawford, 2016). However, the truth is that, Google identifies black people as “gorillas”, the meaningless symbolic string, and we interpret the “gorillas” as gorillas we know. One might wonder, how could “gorillas” not be interpret as gorillas we know? However, we are not playing with words, it’s just that some basic concepts in machine learning have not been established.

4 Reason for Existence of Adversarial Examples

The symbolic representation of a label doesn’t matter, but the relationship between labels matters. For example, the meaning of “cat” and “dog” can’t be expressed by the data set in Figure 2, but the following three points can be expressed by the data set: (1) the images in Image-I are of the same type; (2) the images in Image-II are of the same type; (3) these two types are not the same. We need to depict the partial isomorphism in a more precise way, then define adversarial example.

For any field Π, let its universal set be UΠ, for any Y≠∅, any function f:UΠ→Y is called an explanation of field Π.

Here is a data set for a binary classification problem in Table 3, and the full data set can be found here111https://github.com/IcePulverizer/Hx, where there are millions of formulas for each class. It’s easy to see the formulas in class T are all tautologies, and formulas in class C are all contradictions. We can tell the readers that this assertion is still true for the full data set. However, after machine learning based on this data set, which class should the Peirce’s law be classified into?

The axioms of HX:

The rules of inference of HX:

[Soundness] In HX, if ϕ is provable, ϕ is a tautology.

[Incompleteness] In HX, if ϕ is a tautology but not a T′-{2}-tautology, ϕ is unprovable.

By this instance, vivid answers are given to two questions that what is the ground truth and what is to be learned. They are both subjective and rely on which explanation is desired by us, and the data set avails nothing. Furthermore, as the builders of the data set in Table 3, even if we admit what we want to express by data set is not the formula that is a tautology or contradiction but the LX-formula that is provable or unprovable in HX, does this admission matter? We can’t deny that even though the data set is generated by us according to whether a LX-formula is provable or unprovable in HX by T′, it can also be explained by whether a formula is a tautology or contradiction by T. The idea of the builders of the data set doesn’t matter at all, which is important for us to understand adversarial examples.

In our data set, the Peirce’s law is an adversarial example, because there are two non-isomorphic natural explanations that can both explain the data set. One of them is being true by T. Another one is being provable (in HX) by T′. They two are non-isomorphic because the completeness theorem doesn’t hold in HX. The soundness theorem guarantees that anything provable must be true (Theorem 3). The completeness theorem guarantees that anything true must be provable. Hence, whether being true and provable are isomorphic depends on the soundness and completeness theorem. Since no one can stand an unsound axiomatic system, we only need to concern about the completeness. However, HX is incomplete (Theorem 3). The Peirce’s law is true, but unprovable in HX.

[Gödel’s Incompleteness] Let T (PA⊆T) be an axiomatic system, if T is consistent, there is a sentence σT so that σT and ¬σT are both unprovable in T.

Beyond propositional logic, the Gödel’s sentence σT, in any consistent first-order axiomatic system T that is sufficient to contain all axioms of PA (first-order Peano arithmetic axiomatic system), is also an adversarial example. Gödel’s sentence is constructed by Gödel (1931), then improved by Rosser (1936), it’s true but unprovable inside system. Theorem 5.2 is famous as Gödel’s first incomplete theorem. Gödel’s sentence fits our definition of adversarial example, perfectly. First, no one can deny that being true and provable are two natural explanations. Second, for any consistent existing data set, there must be an axiomatic system T to guarantee being true and provable are isomorphic on this data set. Third, there will be the Gödel’s sentence σT that is true but unprovable.

The adversarial example above is unsolvable, because there are always at least two non-isomorphic natural explanations that can explain the data set. However, that the adversarial set can’t be empty doesn’t mean what the learning algorithm has learned must be the undesired explanation. What if the learning algorithm happens to learn the desired one? First, Turing does not believe this telepathy deserves attention (Turing, 2009), and neither do we. Second, in Section 5.1, we have shown that the idea of the builders of the data set doesn’t matter at all. Third, taking all information into account, like the details of learning algorithm, the details of data set and the performance on training set, verification set or test set, nothing can be concluded about it. Finally, even if this lottery thing is to happen, we can’t know it effectively that we are to win the lottery. Similarly, for any Turing machine and any input string, the Turing machine must halt or not halt on it, but we can’t know it effectively, which is famous as the halting problem of Turing machine, and it’s undecidable(Turing, 1937). We will prove that whether a learning algorithm can learn the desired one is unrecognizable (Theorem 6). The description of symbols is in Table 6 and dependence in DesiredOne in Theorem 6 is in Figure 4. Therefore, even if the outputs for all adversarial examples indeed conform to the explanation we desire, we can’t know it effectively by algorithm or computing.