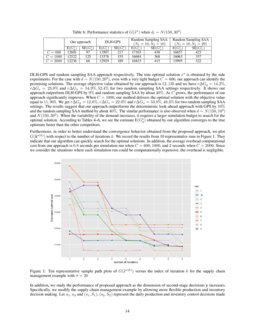 In many applications, such as high-tech manufacturing, bio-pharmaceutical supply chains, and smart power grids with renewable energy, we often need to integrate the strategic, tactical and operational decisions. For example, in the semiconductor manufacturing, the managers need to consider the facility planning and the ensuing production scheduling. The planning decision is made “here and now", and the production scheduling is a “wait and see" decision, which depends on the investment decision and also the realization of demand. To guide the dynamic decisions making, in this paper, we consider the two-stage stochastic programming,

The existing two-stage optimization approaches often assume that the response function q(x,y,ξ) is known [Beale_1955, Dantzig_1955, Shapiro_Philpott_2007, shapiro_2009]. For example, it can be a linear or mixed-integer function. However, for many complex real systems, the response function could be unknown. For example, in the semiconductor manufacturing, the production processes can involve thousands of steps and the production cost function is unknown [Liu_etal_2011]. We resort to simulation for the unknown response under different scenarios ξ and decisions (x,y). Thus, in this paper, we consider the two-stage optimization via simulation (OvS).

Compared to the classical two-stage optimization with the known response function, such as two-stage stochastic linear programming problems, there exist additional challenges to solve the two-stage OvS listed as follows.

Hence, in this paper, we introduce a new simulation optimization approach that allows us to efficiently solve the complex two-stage OvS problems.

Notice that the problem of interest is different with the existing black-box OvS problems studied in the simulation literature [Spall_1992, Jones_1998, Hong_Nelson_2006, Huang_etal_2006G, Sun_etal_2014]. Existing studies tend to focus on the stochastic one-stage OvS,

Given a feasible decision x, the system unknown mean response, denoted by Eξ[f(x,ξ)], can be assessed by simulation. Various simulation optimization algorithms are proposed to solve one-stage OvS; see Henderson and Nelson [Henderson_Nelson_2006] for a review. In particular, metamodel-assisted optimization approaches can efficiently employ the simulation resource for the search of optimal solution [Henderson_Nelson_2006, Fu_2014]. When there is no strong prior information on the mean response surface, the Gaussian process (GP) can be used to characterize the remaining metamodel estimation uncertainty. To balance exploration and exploitation, Sun et al. [Sun_etal_2014] proposed a GP based search (GPS) algorithm for discrete optimization problems, and it can efficiently use the simulation resource and guarantee global convergence.

Inspired by those one-stage metamodel assisted approaches, in this paper, we propose a global-local metamodel-assisted two-stage OvS. Specifically, at each visited first-stage action x, we construct a local GP metamodel for qx(y,ξ)≡q(x,y,ξ) so that we can simultaneously solve a large set of second-stage optimization problems sharing the same first-stage decision x. Then, built on the search results from the second-stage optimization problems, we further develop a global metamodel accounting for various sources of errors. Assisted by the global-local metamodel, we introduce a two-stage optimization via simulation approach that can efficiently employ the limited simulation budget to iteratively search for the optimal first- and second-stage decisions. Here, suppose each simulation run could be computationally expensive, say taking about a few days.

Therefore, the main contributions of this paper are as follows.

To study the finite sample performance of proposed framework and compare it with the random sampling SAA and the deterministic look-ahead approach with GPS, we consider two examples, including a simple two-stage linear optimization problem and a supply chain management example.

where ξ follows the lognormal distribution with mean 0

1. It is easy to see that the first-stage optimal solution is x⋆=3. Notice that the objective function in (3) is monotonic in x, which means that the closer a solution x is to the true optimal x⋆=3, the better quality it has. Thus, we can examine the algorithm’s performance by directly checking the value of optimal first-stage decision ˆx⋆. To study the performance of our approach, we pretend that the objective function is unknown, and it is estimated by simulation. We discretize the solution spaces of x and y with an increment 0.01. In our optimization procedure, we set the initial threshold for the second-stage relative optimality gap α0=0.1 and set the initial number of scenarios n0=10.

ˆx⋆ obtained by using these approaches. The results are estimated based on 100 macro-replications. Given the same simulation budget, our method and deterministic look-ahead with GPS provide much higher quality solutions in terms of means and standard deviations of ˆx⋆. They deliver ˆx⋆ very close to x⋆=3 with all three budget levels. By contrast, the optimal decision obtained by the random sampling SAA approach has low quality and high estimation uncertainty, and it shows only a small improvement as C increases.

We also examine the estimation accuracy of ¯G(ˆx⋆), the estimator of corresponding objective G(ˆx⋆) of the obtained optimal solution ˆx⋆. Since for each ˆx⋆ with G(ˆx⋆)=−3ˆx⋆, we can calculate the relative estimation error rE≡|¯G(ˆx⋆)−G(ˆx⋆)|G(ˆx⋆)⋅100%. Table  2 documents mean and SD of rE in % obtained by using these three approaches. Our method can provide reliable estimates of G(ˆx⋆). The random sampling SAA method shows its deficiency in the objective value estimation accuracy and it has only a small improvement as C increases.

In addition, we further study the two-stage linear optimization problem in (3) and note that ξy is monotonically increasing in y for ξ>0. Since ξ follows the lognormal distribution, it means that the optimal value y⋆ doesn’t depend on ξ. That explains why the proposed global-local metamodel assisted two-stage OvS demonstrates the similar performance with the deterministic look-ahead approach with GPS.

In this section, we use a supply chain management example to study the performance of our approach. It is inspired by our research collaboration with a bio-pharmaceutical manufacturing company. The company produces various commercial and clinical products, which requires some common vital raw materials, including soy and other chemical raw materials. For simplification, we only consider the soy raw material and one type of raw chemical material used for producing the key clinical product. The company orders soy and chemical raw material from outside vendors. While the chemical raw material can be fast-delivered, due to the regulations and long testing cycles, soy has long lead time. Since the clinical demand has high prediction uncertainty [Kaminsky_Wang_2015], the company faces high fluctuations in the total cost. Thus, the company is interested in finding the first-stage soy ordering decision x and the second-stage decisions y=(u,s,S), including production scheduling u and inventory control for the raw chemical material (specified by (s,S) review policy), to minimize the expected overall cost.

The production planning horizon has four weeks, and each week has five work days. Let D=(d1,d2,d3,d4), where di denotes the aggregated clinical demand occurring in the i-th week with i=1,2,…,4. If the production can not fully meet the demand di, the unmet demand will be subcontracted at a much higher price Pc per unit. If the company produces more than needed, the additional products will be stored with the holding cost as Pe per unit. The goal is to minimize the expected total cost,

where Ps and Pr are the unit ordering costs for soy and chemical raw material, h+i denotes the inventory left at week i, h−i denotes the unmet demand for week i, oij and Iij denote the raw chemical material ordering decision and the inventory in the j-th day of i-th week. Let starting chemical raw material inventory I10=100. Thus, the second-stage production cost at the i-th week consists of the ordering cost for the fast-delivery chemical, the subcontract and inventory costs. Let the soy ordering price Ps=10, the chemical ordering price Pr=5, the inventory cost Pe=5 and the penalty Pc=100. For the deterministic look-ahead policy, we solve the optimization problem,

We apply Gaussian process-based search approach (GPS) with same setting as 2.1 except the standard deviation of the Gaussian process σGPS=15 following Section (5.2) in [Sun_etal_2014].

Given any x, since there is no closed-form of G(x), we use SAA with NB scenarios to correctly estimate the mean response, which will be used to assess the performance of optimal solutions obtained by the different candidate approaches.