GF + MMT = GLF – From Language to Semantics through LF

These days, vast amounts of knowledge are available online, most of it in written form. Search engines help us access this knowledge, but aggregating, relating and reasoning with it is still a predominantly human effort. One of the key challenges for automated reasoning based on natural-language texts is the need to extract meaning (semantics) from texts. Natural language understanding (NLU) systems describe the conversion from a set of natural language utterances to terms in a particular logic. Tools for the co-development of grammar and target logic are currently largely missing. We will describe the Grammatical Logical Framework (GLF), a combination of two existing frameworks, in which large parts of a symbolic, rule-based NLU system can be developed and implemented: the Grammatical Framework (GF) and MMT. GF is a tool for syntactic analysis, generation, and translation with complex natural language grammars and MMT can be used to specify logical systems and to represent knowledge in them. Combining these tools is possible, because they are based on compatible logical frameworks: Martin-Löf type theory and LF. The flexibility of logical frameworks is needed, as NLU research has not settled on a particular target logic for meaning representation. Instead, new logics are developed all the time to handle various language phenomena. GLF allows users to develop the logic and the language parsing components in parallel, and to connect them for experimentation with the entire pipeline. 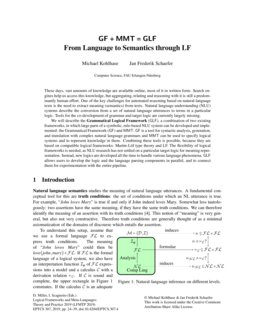 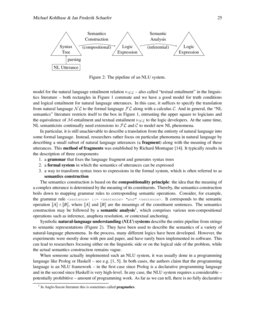 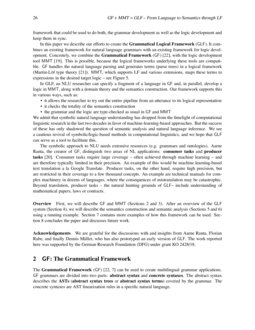 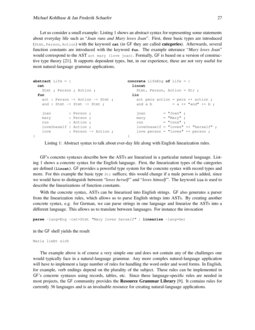 To understand this setup, assume that we use a formal language FL to express truth conditions. The meaning of “John loves Mary” could then be love(john,mary)∈FL. If \cF\cL is the formal language of a logical system, we also have an interpretation function \cI_φ of \cF\cL expressions into a model and a calculus \cC with a derivation relation ⊢_\cC. If \cC is sound and complete, the upper rectangle in Figure 1 commutes. If the calculus \cC is an adequate model for the natural language entailment relation ⊨_NL – also called “textual entailment” in the linguistics literature – both rectangles in Figure 1 commute and we have a good model for truth conditions and logical entailment for natural language utterances. In this case, it suffices to specify the translation from natural language NL to the formal language FL along with a calculus \cC. And in general, the “NL semantics” literature restricts itself to the box in Figure 1, entrusting the upper square to logicians and the equivalence of \cM-entailment and textual entailment ⊨_NL to the logic developers. At the same time, NL semanticists continually need extensions to FL and \cC to model new NL phenomena.

Symbolic natural-language understanding (NLU) systems describe the entire pipeline from strings to semantic representations (Figure 2). They have been used to describe the semantics of a variety of natural-language phenomena. In the process, many different logics have been developed. However, the experiments were mostly done with pen and paper, and have rarely been implemented in software. This can lead to researchers focusing either on the linguistic side or on the logical side of the problem, while the actual semantics construction remains vague.

In this paper we describe our efforts to create the Grammatical Logical Framework (GLF). It combines an existing framework for natural language grammars with an existing framework for logic development. Concretely, we combine the Grammatical Framework (GF) [ranta-2011], with the logic development tool MMT [RabKoh:WSMSML13]. This is possible, because the logical frameworks underlying these tools are compatible. GF handles the natural language parsing and generates terms (parse trees) in a logical framework (Martin-Löf type theory [Ranta:GF04]). MMT, which supports LF and various extensions, maps these terms to expressions in the desired target logic – see Figure LABEL:fig:glff.

In GLF, an NLU researcher can specify a fragment of a language in GF and, in parallel, develop a logic in MMT, along with a domain theory and the semantics construction. Our framework supports this in various ways, such as:

We admit that symbolic natural language understanding has dropped from the limelight of computational linguistic research in the last two decades in favor of machine-learning-based approaches. But the success of these has only shadowed the question of semantic analysis and natural language inference. We see a cautious revival of symbolic/logic-based methods in computational linguistics, and we hope that

GLF can serve as a tool to facilitate this.

The symbolic approach to NLU needs extensive resources (e.g. grammars and ontologies). Aarne Ranta, the creator of GF, distinguish two areas of NL applications: consumer tasks and producer tasks [Ranta:GfGoogle2016]. Consumer tasks require large coverage – often achieved through machine learning – and are therefore typically limited in their precision. An example of this would be machine learning-based text translation a la Google Translate. Producer tasks, on the other hand, require high precision, but are restricted in their coverage to a few thousand concepts. An example are technical manuals for complex machinery in dozens of languages, where the consequences of mistranslation may be catastrophic. Beyond translation, producer tasks – the natural hunting grounds of GLF– include understanding of mathematical papers, laws or contracts.

We are grateful for the discussions with and insights from Aarne Ranta, Florian Rabe, and finally Dennis Müller, who has also prototyped an early version of GLF. The work reported here was supported by the German Research Foundation (DFG) under grant KO 2428/18.

Let us consider a small example: Listing LABEL:lst:GF-Life shows an abstract syntax for representing some statements about everyday life such as “Joan runs and Mary loves Joan”. First, three basic types are introduced (Stmt, Person, Action) with the keyword cat (in GF they are called categories). Afterwards, several function constants are introduced with the keyword fun. The example utterance “Mary loves Joan” would correspond to the AST act mary (love joan). Formally, GF is based on a version of constructive type theory [Ranta:GF04]. It supports dependent types, but, in our experience, these are not very useful for most natural-language grammar applications.