In this work, we provide geometric interpretations of the normalized epipolar error. Most notably, we show that it is directly related to the following quantities: (1) the shortest distance between the two backprojected rays, (2) the dihedral angle between the two bounding epipolar planes, and (3) the L_1-optimal angular reprojection error. 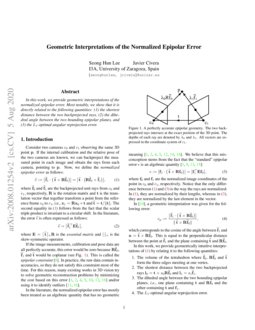 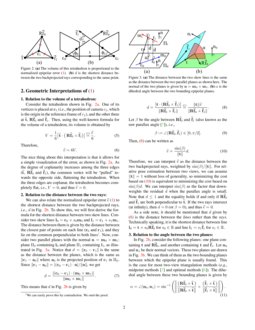 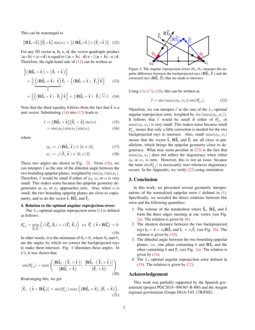 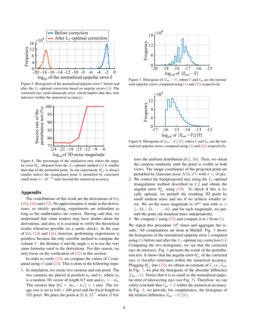 For a tetrahedron, suppose that all internal angles of faces and all dih...
Hiroki Ishizaka, et al. ∙

In this work, we study the spectrum of the regularized normalized Laplac...
Mounia Hamidouche, et al. ∙

Model Checking on Interpretations of Classes of Bounded Local Cliquewidth

On the Correspondence between Gaussian Processes and Geometric Harmonics

Consider two cameras c0 and c1 observing the same 3D point p. If the internal calibration and the relative pose of the two cameras are known, we can backproject the measured point in each image and obtain the rays from each camera, pointing to p. Now, we define the normalized epipolar error as follows:

where ˆf0 and ˆf1 are the backprojected unit rays from c0 and c1, respectively, R is the rotation matrix and t

c0 to c1, i.e., x1=Rx0+t and ˆt=t/∥t∥. The second equality in (1) follows from the fact that the scalar triple product is invariant to a circular shift. In the literature, the error ˆe is often expressed as follows:

If the image measurements, calibration and pose data are all perfectly accurate, this error would be zero because Rˆf0, ˆf1 and ˆt would be coplanar (see Fig. 1). This is called the epipolar constraint [8]. In practice, the raw data contain inaccuracies, so they do not satisfy this constraint most of the time. For this reason, many existing works in 3D vision try to solve geometric reconstruction problems by minimizing the cost based on this error [1, 2, 4, 5, 10, 12, 16]

and/or using it to identify outliers

In the literature, the normalized epipolar error has mostly been treated as an algebraic quantity that has no geometric meaning

In [10], a geometric interpretation was given for the following error:

which corresponds to the cosine of the angle between ˆf1 and n=ˆt×Rˆf0. This is equal to the perpendicular distance between the point at ˆf1 and the plane containing ˆt and Rˆf0.

In this work, we provide geometrically intuitive interpretations of (1) by relating it to the following quantities:

1. Relation to the volume of a tetrahedron:

Consider the tetrahedron shown in Fig. 2reda. One of its vertices is placed at c1 (, the position of camera c1, which is the origin in the reference frame of c1), and the other three at ˆt, Rˆf0 and ˆf1. Then, using the well-known formula for the volume of a tetrahedron, its volume is obtained by

The nice thing about this interpretation is that it allows for a simple visualization of the error, as shown in Fig. 2reda. As the degree of coplanarity increases among the three edges (ˆt, Rˆf0 and ˆf1), the common vertex will be “pulled” towards the opposite side, flattening the tetrahedron. When the three edges are coplanar, the tetrahedron becomes completely flat, , V=0, and thus ˆe=0.

2. Relation to the distance between the two rays:

This means that d in Fig. 2redb is given by

Therefore, we can interpret ˆe as the distance between the two backprojected rays, weighted by sin(β)/∥t∥

. For relative pose estimation between two views, we can assume

∥t∥=1 without loss of generality, so minimizing the cost based on (10) is equivalent to minimizing the cost based on sin(β)d. We can interpret sin(β) as the factor that downweights the residual d when the parallax angle is small. Note that d≤1 and the equality holds if and only if Rˆf0 and ˆf1 are both perpendicular to ˆt. If the two rays intersect (at infinity), then d=0 (or β=0), and thus ˆe=0.

As a side note, it should be mentioned that d given by (8) is the distance between the lines rather than the rays. Technically speaking, it is the shortest distance between line l0=t+s0Rˆf0 for s0∈R and line l1=s1ˆf1 for s1∈R.

3. Relation to the angle between the two planes:

In Fig. 2redb, consider the following planes: one plane containing t and Rˆf0, and another containing t and ˆf1. Let n0 and n1 be their normal vectors. These two planes are drawn in Fig. 3redb. We can think of them as the two bounding planes between which the epipolar plane is usually found. This is the case for most two-view triangulation methods (, midpoint methods [7] and optimal methods [6]). The dihedral angle between these two bounding planes is given by

This can be rearranged to

Note that the third equality follows from the fact that ˆt is a unit vector. Substituting (14) into (12) leads to

These two angles are shown in Fig. 2redb. From (16), we can interpret ˆe as the sine of the dihedral angle between the two bounding epipolar planes, weighted by sin(ϕ0)sin(ϕ1). Therefore, ˆe would be small if either of ϕ0, ϕ1 or α is very small. This makes sense because the epipolar geometry degenerates as ϕ0 or ϕ1 approaches zero. Also, when α is small, the two bounding epipolar planes are close to coplanarity, and so do the vector ˆt, Rˆf0 and ˆf1.

The L1-optimal angular reprojection error [6] is defined as follows:

In other words, it is the minimum of θ0+θ1 where θ0 and θ1 are the angles by which we correct the backprojected rays to make them intersect. Fig. 4 illustrates these angles. In [6], it was shown that

Rearranging this, we get

Therefore, we can interpret ˆe as the sine of the L1-optimal angular reprojection error, weighted by sin(max(ϕ0,ϕ1)). It follows that ˆe would be small if either of θ∗L1 or max(ϕ0,ϕ1) is very small. This makes sense because small θ∗L1 means that only a little correction is needed for the two backprojected rays to intersect. Also, small max(ϕ0,ϕ1) means that the vector ˆt, Rˆf0 and ˆf1 are all close to parallelism, which brings the epipolar geometry close to degeneracy. What may seem peculiar in (22) is the fact that max(ϕ0,ϕ1) does not reflect the degeneracy when either ϕ0 or ϕ1 is zero. However, this is not an issue, because the term sin(θ∗L1) is necessarily zero whenever degeneracy occurs. In the Appendix, we verify (22) using simulation.

In this work, we presented several geometric interpretations of the normalized epipolar error ˆe defined in (1). Specifically, we revealed the direct relations between this error and the following quantities:

This work was partially supported by the Spanish government (project PGC2018- 096367-B-I00) and the Aragón regional government (Grupo DGA-T45_17R/FSE).

The contributions of this work are the derivations of (6), (10), (16) and (22). No approximation is made in the derivations, so strictly speaking, experiments are redundant as long as the mathematics are correct. Having said that, we understand that some readers may have doubts about the derivations, and also, it is essential to verify the theoretical results whenever possible (as a sanity check). In the case of (6), (10) and (16), however, performing experiments is pointless because the only sensible method to compute the volume V, the distance d and the angle α is to use the very same formulas used in the derivations. For this reason, we only focus on the verification of (22) in this section.

We repeat this procedure 106 times and aggregate the results. All computations are done in Matlab. Fig. 5 shows the histograms of the normalized epipolar error ˆe computed using (1) before and after the L1-optimal ray correction [6]. Comparing the two histograms, we see that the corrected rays do intersect. Fig. 6 presents the result of the perturbation test. It shows that the angular error θ∗L1 of the corrected rays is (locally) minimum within the numerical accuracy. Plugging θ∗L1 into (22), we obtain an estimate of ˆe, , ˆeest. In Fig. 7, we plot the histogram of the absolute difference |ˆeest−ˆe|. Notice that it is as small as the normalized epipolar error of intersecting rays (see Fig. 5). Therefore, we can safely conclude that ˆeest=ˆe within the numerical accuracy. In Fig. 8, we provide, for completeness, the histogram of the relative difference |ˆeest−ˆe|/|ˆe|.