Geometric Formulation for Discrete Points and its Applications

We introduce a novel formulation for geometry on discrete points. It is based on a universal differential calculus, which gives a geometric description of a discrete set by the algebra of functions. We expand this mathematical framework so that it is consistent with differential geometry, and works on spectral graph theory and random walks. Consequently, our formulation comprehensively demonstrates many discrete frameworks in probability theory, physics, applied harmonic analysis, and machine learning. Our approach would suggest the existence of an intrinsic theory and a unified picture of those discrete frameworks. 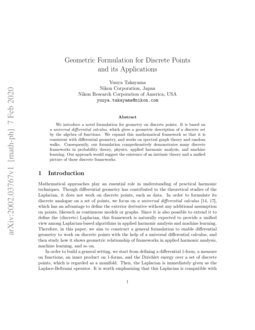 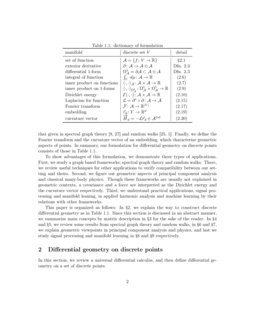 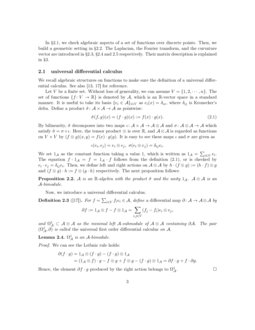 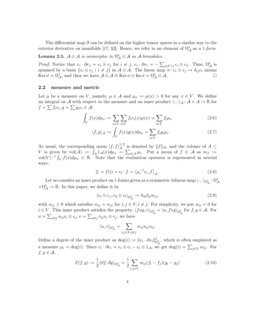 Mathematical approaches play an essential role in understanding of practical harmonic techniques. Though differential geometry has contributed to the theoretical studies of the Laplacian, it does not work on discrete points, such as data. In order to formulate its discrete analogue on a set of points, we focus on a universal differential calculus [14, 17], which has an advantage to define the exterior derivative without any additional assumption on points, likesuch as continuous models or graphs. Since it is also possible to extend it to define the (discrete) Laplacian, this framework is naturally expected to provide a unified view among Laplacian-based algorithms in applied harmonic analysis and machine learning. Therefore, in this paper, we aim to construct a general formulation to enable differential geometry to work on discrete points with the help of a universal differential calculus, and then study how it shows geometric relationship of frameworks in applied harmonic analysis, machine learning, and so on.

In order to build a general setting, we start from defining a differential 1-form, a measure on functions, an inner product on 1-forms, and the Dirichlet energy over a set of discrete points, which is regarded as a manifold. Then, the Laplacian is immediately given as the Laplace-Beltrami operator. It is worth emphasizing that this Laplacian is compatible with that given in spectral graph theory [8, 27] and random walks [25, 1]

. Finally, we define the Fourier transform and the curvature vector of an embedding, which characterize geometric aspects of points. In summary, our formulation for differential geometry on discrete points consists of those in Table

To show advantages of this formulation, we demonstrate three types of applications. First, we study a graph based frameworks; spectral graph theory and random walks. There, we review useful techniques for other applications to verify compatibility between our setting and theirs. Second, we figure out geometric aspects of principal component analysis and classical many-body physics. Though these frameworks are usually not explained in geometric contexts, a covariance and a force are interpreted as the Dirichlet energy and the curvature vector respectively. Third, we understand practical applications, signal processing and manifold leaning, in applied harmonic analysis and machine learning by their relations with other frameworks.

This paper is organized as follows: In §2, we explain the way to construct discrete differential geometry as in Table 1.1. Since this section is discussed in an abstract manner, we summarize main concepts by matrix description in §3 for the sake of the reader. In §4 and §5, we review some results from spectral graph theory and random walks, in §6 and §7, we explain geometric viewpoints in principal component analysis and physics, and last we study signal processing and manifold learning in §8 and §9 respectively.

In this section, we review a universal differential calculus, and then define differential geometry on a set of discrete points.

In §2.1, we check algebraic aspects of a set of functions over discrete points. Then, we build a geometric setting in §2.2. The Laplacian, the Fourier transform, and the curvature vector are introduced in §2.3, §2.4 and 2.5 respectively. Their matrix description is explained in §3.

We recall algebraic structures on functions to make sure the definition of a universal differential calculus. See also [13, 17] for reference.

Let V be a finite set. Without loss of generality, we can assume V={1,2,⋯,n}. The set of functions {f:V→R} is denoted by A, which is an R-vector space in a standard manner. It is useful to take its basis {ei∈A}i∈V as ei(x)=δix, where δij is Kronecker’s delta. Define a product ~σ:A×A→A as pointwise:

We set 1A as the constant function taking a value 1, which is written as 1A=∑i∈Vei. The equation f⋅1A=f=1A⋅f follows from the definition (2.1), or is checked by ei⋅ej=δijei. Then, we define left and right actions on A⊗A by h⋅(f⊗g):=(h⋅f)⊗g and (f⊗g)⋅h:=f⊗(g⋅h) respectively. The next proposition follows:

A is an R-algebra with the product ~σ and the unity 1A. A⊗A is an A-bimodule.

We can see the Leibniz rule holds:

Hence, the element ∂f⋅g produced by the right action belongs to Ω1A. ∎

The differential map ∂ can be defined on the higher tensor spaces in a similar way to the exterior derivative on manifolds [17, §2]. Hence, we refer to an element of Ω1A as a 1-form.

As usual, the corresponding norm ⟨f,f⟩1/2A is denoted by ∥f∥A, and the volume of A⊂V is given by vol(A):=∫A1A(x)dμx=∑i∈Aμi. Put a mean of f∈A as mf:=vol(V)−1∫Vf(x)dμx∈R. Note that the evaluation operator is represented in several ways:

Let us consider an inner product on 1-forms given as a symmetric bilinear map ×Ω1A→R. In this paper, we define it by

is called the Dirichlet energy with respect to f and g. It is easy to check

The above inner product can be defined through a metric (⋅,⋅)Ω1A:Ω1A×Ω1A→A⊗A:

which preserves the A-bimodule structures (fug,v)Ω1A=f(u,v)Ω1Ag=(u,fvg)Ω1A. By integrating it over V×V, we have the inner product. Moreover, its integration over V corresponds to a dual Riemann metric g∗:Ω1M×Ω1M→C(M) in differential geometry.

Sometimes, it is useful to consider another basis {~ei}:={ei/√μi}, which is an orthonormal basis on (A,⟨⋅,⋅⟩A). By this basis, we can represent f∈A as

In general, V is regarded as a set of vertices in an oriented graph and wij as a weight on the oriented edge (i,j). Here, we can ignore the orientation because of the condition wji=wij. In this sense, (A,⟨⋅,⋅⟩A) and (Ω1A,⟨⋅,⋅⟩Ω1A) are Hilbert spaces on the vertices and the edges respectively [20]. When wij=0, the edge (i,j) is viewed as disconnected. If there does not exist non-empty proper subset V′⊂V which satisfies wij=0 and wji=0 for all i∈V′ and j∈V∖V′, the graph is called connected.

The original universal differential calculus refers to a disconnected edge (i,j) as a non-allowed element ei⊗ej, and then realizes a non complete graph as a quotient algebra of Ω1A by the ideal generated by non-allowed elements [17, §4]. This construction seems to describe a topology of a graph, contrary, ours focus on its metric structure.

Thereby, the Laplacian L=12∂∗∘∂ is represented as

This is also known as the graph Laplacian, as explained in §3. By definition, we have E(f,g)=⟨f,Lg⟩A and the above representation follows from (2.11) as well. When the corresponding graph is connected, the Dirichlet energy E(f,f) takes the minimum value 0 if and only if f is a constant function. Since L

is self-adjoint, we can take eigenfunctions

In the continuous setting, the Fourier transform is given by F[f](ξ)=∫f(x)e√−1ξxdx, and e√−1ξx is an eigenfunction of the 1-dimensional Laplacian, −d2dx2e√−1ξx=ξ2e√−1ξx.

On the analogy, in the graph setting, it is natural to use the eigenfunctions {vi} of the Laplacian L, instead of e√−1ξx, and define F[f]i:=⟨f,vi⟩A∈R for f∈A. The transformation F:A∋f↦F[f]∈Rn is known as the graph Fourier transform [18]. We call F[f]i the i-th Fourier coefficient or the i-th frequency. The corresponding inverse Fourier transform is given by

which is just the eigenfunction expansion by {vi}. It is easy to see Parseval’s identity holds:

This is valid for other expansions by orthogonal functions, such as (2.13). Sometimes, the convolution operator ∗g:A→A is defined so that F[f∗g]i=F[f]iF[g]i holds:

Our setting so far did not use a coordinate of points in V, just used their indexes. Herein, suppose that points are embedded in Euclidean space Rd. Namely, we consider a map

In differential geometry, an embedding →r:M→Ed induces a Riemann metric g→r on a manifold M, and especially determines the Laplace-Beltrami operator Lg→r. The normal bundle is given on M, and then the mean curvature vector →H→r is defined as the trace of the second fundamental form divided by n=dimM. Hence, the vector indicates the normal direction on each point of M, and its length is called the mean curvature. Beltrami’s formula relates those objects as

One can refer to [7, 4] for mathematical details.

Motivated by this formula, we define a graph curvature vector →Hd=(H1,H2,⋯,Hd)∈A⊕d of an embedding →rd by

Unlike differential geometry, this vector does not indicate the normal direction, because it is not defined for discrete points. Nevertheless, the vector has a special meaning in physics as explained in §7. The embedding energy E(→rd,→rd):=∑ds=1E(rs,rs) is given with the curvature vector, that is, E(→rd,→rd)=∫V⟨→rd(x),−→Hd(x)⟩Rddμx, and invariant by the Euclidean group action. In some cases, it is convenient to suppose a metric ⟨⋅,⋅⟩Ω1A is induced by an embedding as in Figure 2.1. For example, we can define weights {wij} by using the distance, such as

Several researches show this type of weights converges into a heat kernel on a manifold in the limit |V|→∞ [21, 3, 9]. Instead, we study another type of weights in Theorem 7.4.

3 Matrix description of the geometric formulation

In this section, we give matrix description of the formulation discussed in §2.

First we remark that our formulation contains two types of parameters in a measure μ and an inner product ⟨⋅,⋅⟩Ω1A independently. A measure μ is just given by a positive function on V

, thus its degree of freedom is

n. On the other hand, an inner product ⟨⋅,⋅⟩Ω1A is determined by weights {wij} which satisfy wij≥0,wji=wij and wii=0, hence its degree of freedom is n(n−1)/2. When they are taken on a certain relation, well-known cases appear as follows.

By {ei}-basis, a function f∈A is represented as a numerical vector f=t(f1,⋯,fn). Then, an inner product ⟨f,g⟩A is written as tfMg, and the Dirichlet energy E(f,g)=2⟨∂f,∂g⟩Ω1A is as tf(D−W)g, which does not depend on M. The Laplacian L is given as M−1(D−W)

, and its eigenvalue equation is

The corresponding eigenvectors, denoted by an

When assume M=I or D, we obtain the known Laplacians; the combinatorial Laplacian, the random walk Laplacian, and the normalized Laplacian [20]. However, we do not use this configuration for random walks in §5.

The above notations are summarized in Table 3.1.

We review basic results about eigenvalue estimation in spectral graph theory to check its compatibility with our formulation. These results are regarded as discrete analogues of spectral geometry and related to the graph cut problem in §

First, we estimate an upper bound for the largest eigenvalue ρn. Put δ:=maxi∈Vdeg(i)/μi.

Next, we give an upper bound for the second smallest eigenvalue ρ2, which is characterized as a minimum value of E(f,f)/∥f∥2A in functions {f∈A∣f⊥1A}. For this purpose, the isoperimetric constant β is useful, because it is defined in a similar way to the characterization of ρ2:

Here, we estimate an lower bound for the second smallest eigenvalue ρ2.

In the second inequality, we used the Cauchy-Schwarz inequality: for ω±=∑i,j∈V,i≠j|v2(i)±v2(j)|ei⊗ej∈Ω1A. ∎

This theorem is called Cheeger’s inequality and its continuous analogue is known in differential geometry [6].

In this section, we deduce some notations of random walks from our formulation. In §5.1, we review random walks briefly, and in §5.2, we consider their connection with a geometric distance.

for f∈A, where we put θii=cμi−deg(i) and θij=wij for i,j∈V. Needless to say, the eigenvalue decomposition of Sc is given as