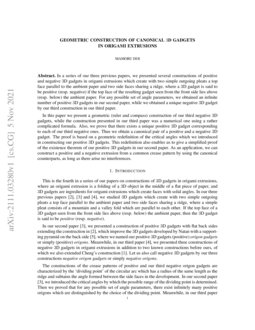 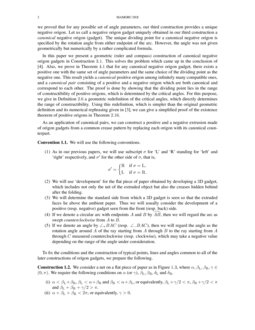 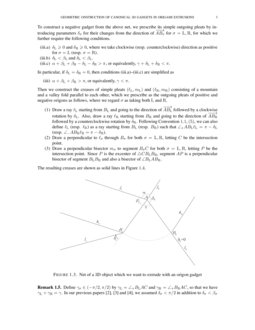 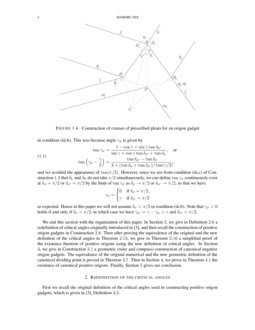 Clustering Signed Networks with the Geometric Mean of Laplacians

An origami extrusion is a folding of a 3D object in the middle of a flat...
Mamoru Doi, et al. ∙

No property may be taken for public use without just compensation. The i...
Odysseas Kopsidas, et al. ∙

An origami extrusion is a folding of a 3D object in the middle of a flat...
Mamoru Doi, et al. ∙

We present unified bijections for maps on the torus with control on the ...
Éric Fusy, et al. ∙

This is the fourth in a series of our papers on constructions of 3D gadgets in origami extrusions, where an origami extrusion is a folding of a 3D object in the middle of a flat piece of paper, and 3D gadgets are ingredients for origami extrusions which create faces with solid angles. In our three previous papers [2], [3] and [4], we studied 3D gadgets which create with two simple outgoing pleats a top face parallel to the ambient paper and two side faces sharing a ridge, where a simple pleat consists of a mountain and a valley fold which are parallel to each other. If the top face of a 3D gadget seen from the front side lies above (resp. below) the ambient paper, then the 3D gadget is said to be positive (resp. negative).

In this paper we present a geometric (ruler and compass) construction of canonical negative origon gadgets in Construction 3.1. This solves the problem which came up in the conclusion of [4]. Also, we prove in Theorem 4.1 that for any canonical negative origon gadget, there exists a positive one with the same set of angle parameters and the same choice of the dividing point as the negative one. This result yields a canonical positive origon among infinitely many compatible ones, and a canonical pair consisting of a positive and a negative origon which are both canonical and correspond to each other. The proof is done by showing that the dividing point lies in the range of constructibility of positive origons, which is determined by the critical angles. For this purpose, we give in Definition 2.6 a geometric redefinition of the critical angles, which directly determines the range of constructibility. Using this redefinition, which is simpler than the original geometric definition and its numerical rephrasing given in [3], we can give a simplified proof of the existence theorem of positive origons in Theorem 2.16.

As an application of canonical pairs, we can construct a positive and a negative extrusion made of origon gadgets from a common crease pattern by replacing each origon with its canonical counterpart.

We will use the following conventions.

To fix the conditions and the construction of typical points, lines and angles common to all of the later constructions of origon gadgets, we prepare the following.

To construct a negative gadget from the above net, we prescribe its simple outgoing pleats by introducing parameters δσ for their changes from the direction of −−−→ABσ for σ=L,R, for which we further require the following conditions.

In particular, if δL=δR=0, then conditions (iii.a)–(iii.c) are simplified as

Then we construct the creases of simple pleats (ℓL,mL) and (ℓR,mR) consisting of a mountain and a valley fold parallel to each other, which we prescribe as the outgoing pleats of positive and negative origons as follows, where we regard σ as taking both L and R.

The resulting creases are shown as solid lines in Figure 1.4.

2. Redefinition of the critical angles

First we recall the original definition of the critical angles used in constructing positive origon gadgets, which is given in [3], Definition 3.2.

Consider a development as in Figure 1.4, for which we assume conditions (i), (ii) and (iii.a)–(iii.c) of Construction 1.2. Then we define the critical angles ζσ∈(0,γ/2] for σ=L,R by the following construction, where all procedures are done for both σ=L,R.

The critical angles are also defined numerically by the following result.

The critical angle ζσ given in Definition 2.1 is numerically given by

To introduce a new geometric definition of the critical angles, we shall prepare the following.

is well-defined. The angles defined here are shown in Figure 2.5.

Now we shall give a new geometric definition of the critical angles.

We consider a net as in Figure 1.3. As in Definition 2.4, let cA be a circle with center A through BL and BR, \ThisStyle\stackon[0pt]$\SavedStyleBLBR$\stretchto\scaleto\scalerel∗[]⌢0.8ex and \ThisStyle\stackon[0pt]$\SavedStyleBRBL$\stretchto\scaleto\scalerel∗[]⌢0.8ex be a minor and a major arc of cA respectively, and ϕσ,ϕ′σ be angle functions. Then we define the critical angles ζσ∈(0,γ/2] for σ=L,R as follows, where we regard σ as taking both L and R.

Then the construction of positive origon gadgets is given as follows.

Consider a development as in Figure 1.4, for which we assume conditions (i), (ii) and (iii.a)–(iii.c) of Construction 1.2. Then the crease pattern of a positive origon gadget with prescribed simple outgoing pleats (ℓL,mL) and (ℓR,mR) is constructed as follows, where we regard σ as taking both L and R.

According to [3], Setion 4, the condition that a positive origon gadget is constructible on the side of σ is given by

We can rewrite (???) to state the constructibility theorem of positive origons as follows.

Let D be a dividing point chosen in procedure (1) of Construction 2.8, and let ϕσ=ϕσ(D), ψσ=ψσ(D) and ρσ=ρσ(D) be as in Definition 2.4. The constructibility condition (???) of a positive origon gadget is equivalent to both of the following conditions:

where ζσ is the critical angle given either geometrically by Definition 2.1 or 2.6, or numerically by Proposition 2.3. In particular, the equality of (???) is equivalent to that of (???).

To prove the theorem, we will use the following two results.

Let D′σ be a point in major arc \ThisStyle\stackon[0pt]$\SavedStyleBRBL$\stretchto\scaleto\scalerel∗[]⌢0.8ex with center A given in Definition 2.6, (1), so that ϕ′σ(D′σ)=2βσ. Suppose that there exists a point D in minor arc \ThisStyle\stackon[0pt]$\SavedStyleBLBR$\stretchto\scaleto\scalerel∗[]⌢0.8ex with center A satisfying

which gives ρσ(D)=ρσ(D′σ) as desired. This completes the proof of Proposition 2.14. ∎

Let D′σ and B′σ be points in major arc \ThisStyle\stackon[0pt]$\SavedStyleBRBL$\stretchto\scaleto\scalerel∗[]⌢0.8ex with center A given in procedures (1) and (2) of Definition 2.6 respectively. Then we have

Also, either one of the following cases holds for D′σ:

Regarding (???), the second equality is obvious from the construction of D′σ in (1) of Definition 2.6. Thus it suffices to prove the first equality because then the middle inequality follows from condition (iii.b) of Construction 1.2. First suppose δσ⩽π/2, so that γσ⩾0. Then we have

Next suppose βσ+γ/2+δσ′<π. Then we see from Proposition 2.15 that D′σ lies strictly between B′L and B′R in major arc \ThisStyle\stackon[0pt]$\SavedStyleBRBL$\stretchto\scaleto\scalerel∗[]⌢0.8ex, so that ϕσ(Dσ)∈(0,γ). Meanwhile, Definition 2.1 or Proposition 2.3 gives that ζσ∈(0,γ/2). Now let D be a point in minor arc \ThisStyle\stackon[0pt]$\SavedStyleBLBR$\stretchto\scaleto\scalerel∗[]⌢0.8ex such that ϕσ(D)=2ζσ∈(0,γ). Then it follows from Theorem 2.12 that D satisfies

so that we have ρσ(D)=ρσ(D′σ) by Proposition 2.14. Since Dσ also satisfies ρσ(Dσ)=ρσ(D′σ), we must have Dσ=D from the monotonicity of ρσ on minor arc \ThisStyle\stackon[0pt]$\SavedStyleBLBR$\stretchto\scaleto\scalerel∗[]⌢0.8ex. Hence we have ϕ(Dσ)=2ζσ as desired.

This completes the proof of Theorem 2.13. ∎

Now we recall the following existence theorem of positive origons.

Here we shall give a geometric proof of this theorem using Definition 2.6, which simplifies the two proofs given in [3].

It suffices to prove that ϕL(DR)<ϕL(DL). Since we see from (<span class="