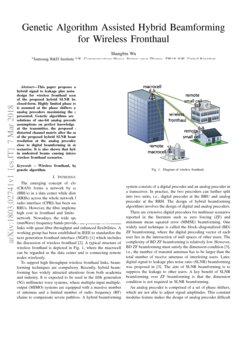 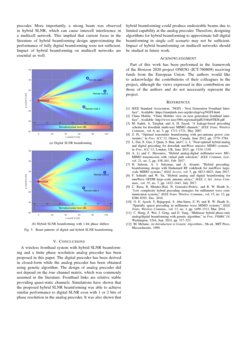 The emerging concept of cloud radio access network (CRAN) forms a network by centralizing baseband units (BBUs) in a data center while distributing radio remote heads (RRHs) across the whole network layout. The common public radio interface (CPRI) has been used to connect the BBU and RRUs. However, the fibre implementation of CPRI introduces high cost in fronthaul and limits flexibility of the fronthaul network. Nowadays, the wide spectrum in millimeter wave (mmWave) frequency bands provides the potential of fronthaul links with quasi-fibre throughput and enhanced flexibilities. A working group has been established in IEEE to standardize the next generation fronthaul interface (NGFI) [1] which includes the discussion of wireless fronthaul [2]. A typical structure of wireless fronthaul is depicted in Fig. 1, where the macrocell can be regarded as the data center and is connecting remote nodes wirelessly.

There are extensive digital precoders for multiuser scenarios reported in the literature such as zero forcing (ZF) and minimum mean squared error (MMSE) beamforming. One widely used technique is called the block–diagonalized (BD) ZF beamforming, where the digital precoding vector of each user lies in the intersection of null spaces of other users. The complexity of BD ZF beamforming is relatively low. However, BD ZF beamforming must satisfy the dimension condition

An analog precoder is comprised of a set of phase shifters, which are not able to adjust signal amplitudes. This constant modulus feature makes the design of analog precoder difficult as the optimization problem will become nonconvex. As a result, iterative procedure is usually used to compute analog precoders. Iterative algorithms for analog precoders to maximize mutual information were proposed in [4]. Authors in [5] considered the sub-connected structure and sequentially computed the optimal precoder for each subarray. A joint analog precoder and combiner design for both fully connected structure and sub-connected structures was proposed in [6]. Hadamard matrix and Fourier matrix were considered in [7] as the codebook for the analog precoder. Also, limited phase resolution was assumed in the analog precoder. Orthogonal matching pursuit was used for the hybrid precoder to approximate the optimum precoder. Large system analysis was used in [8] to assist the design of hybrid beamforming for millimeter wave systems. This design approach was first used for single user scenario and then generalized to multi-user scenario. The design in [9] and [10] provided low-complexity solutions to find analog and digital precoders based on the unconstrained optimum precoders. Iterative analog precoder design with quantization was proposed in [10], where the phase of each phase shifter can only be selected from a finite set of values.

The contributions of this paper are listed as follows.

where amn is the element in the mth row and nth column in the analog precoding matrix. Although the design principle to be described in following paragraphs can be applied to phase shifters with arbitrary phase resolution, this paper focuses on one-bit phase resolution, i.e., B=1, as this can largely reduce the cost of antenna deployments. With the above settings, the SINR of the lth remote node in a hybrid beamforming system can be calculated as

According to [3], maximizing (6) can be solved via the generalized Rayleigh quotient and the optimum digital precoder is expressed as Dl∝v1, where Dl needs to be normalized such that the aggregate precoding matrix has norm one, i.e., ∥ADl∥=1 and v1 is the eigen vector corresponding to the maximum eigen value λ(l)max of

Since there is not a direct mapping from SLNR to sum rate, low signal to noise ratio (SNR) approximation is used to design the analog precoder. When the noise power is significantly larger than the power of leakage or interference, i.e., Mlσ2l>>K∑k=1,k≠l∥HkADl∥2, the sum rate, which is also defined as the cost function f(A), can be approximated by

As a result, to maximize the sum rate, the optimum analog precoder is expressed as Aopt=argmaxA∈Sf(A)

S. However, the cardinality of the set S can be computed as 2NTNRFB, which is massive for exhaustive search. Therefore, a practical search algorithm for (sub-)optimal solutions is needed.

is not a square matrix in general. Techniques can be used to estimate the

Genetic algorithm [12] has been widely used to solve combinatorial optimization problem. It mimics the biological evolution by introducing random variations to the chromosomes in the population. Chromosomes with higher fitness in the population will have higher chances of survival. After a few generations, the remained chromosomes in the population are likely to have high fitness values and therefore represent (sub-)optimal solutions. The three basic operations in genetic algorithm, i.e., selection, crossover, and mutation, will be performed iteratively and introduced in later sections. Authors in [11] used a floating-point genetic algorithm to design hybrid beamforming to maximize SINR. However, neither the analog precoder nor the digital precoder has closed-form solutions in [11]. It should be noticed that the hybrid SLNR beamforming proposed in this paper has closed-form solutions to the digital precoder, which largely reduces the computation complexity compared to [11].

Ngen_max as the condition to exit the iteration process. The value of Ngen_max is a tradeoff between complexity and performance. In this paper, as shown in later paragraphs, 150⩽Ngen_max⩽200 will be reasonable numbers. In the context of genetic algorithm, the fitness is defined as the probability that a chromosome is able to reproduce. It is straightforward to reuse the approximated sum rate in (8) as the fitness function. A chromosome with larger fitness corresponds to a better solution for the analog precoder and higher SLNR. Also, it has a higher chance to be selected for crossover, mutation, and survive in the population.

Crossover randomly interchanges bits between the selected pair of chromosomes (parents) according to a predefined crossover probability pc. A typical value of pc is 0.7 [12]. The resulting chromosomes are known as children. Next, mutation is performed on the two children by mutating each bit with mutation probability pm. A typical value of pm is 0.001 [12]. Then, the mutated children will be placed into the new population.

As described in Fig. 2, the analog precoder is computed using the genetic algorithm in an iterative manner. During iterations, it is assumed that the channel is quasi-static and the remote nodes are sending reference signals to the transmitter. The quasi-static assumption holds in wireless fronthaul use cases as the macrocell and remote nodes are relatively stable comparing to regular mobile communications. In each iteration , the CPU observes the distorted channel matrix HlA without the need of the true channel matrix. Relying on channel reciprocity in the TDD mode, the transmitter can adjust the phases of the analog precoder and evaluate the fitness after each adjustment according to the genetic algorithm. The adjustment of analog precoder can either be placed in Line 14 or right after Line 12 in Fig. 2 depending on implementation.

Mean remote node sum rates of hybrid SLNR beamforming in an independently and identically distributed (i.i.d.) Rayleigh fading channel were depicted in Fig. 3. Digital SLNR, BD ZF, and hybrid BD ZF were shown as reference. In general, SLNR slightly outperformed BD ZF in the low SNR regime. Performance of hybrid SLNR with 1 or 2 bits phase resolution analog precoder was approximately 15% to 7% worse than digital SLNR in the SNR range between -12 dB to 0 dB. This performance gap reduced to 5% in the moderate SNR regime. Considering that the implementation of hybrid SLNR was significantly simpler than digital SLNR, the hybrid SLNR structure was able to provide better tradeoff between complexity and performance.

Beam patterns of digital and hybrid SLNR beamforming were illustrated in Fig. 5. It was assumed in this figure that remote nodes were in line-of-sight positions. It can be seen in Fig. (a)a that with digital SLNR beamforming, the shaped beams were sharp and with clear spatial boundaries. The hybrid SLNR beamforming with 1-bit phase shifters in Fig. (b)b had reasonably well shaped beams. However, remote nodes received weaker energy due to the limited capability of analog precoder. More importantly, a strong beam was observed in hybrid SLNR, which can cause intercell interference in a multicell network. This implied that current focus in the literature of hybrid beamforming design approximating the performance of fully digital beamforming were not sufficient. Impact of hybrid beamforming on multicell networks are essential as well.

Part of this work has been performed in the framework of the Horizon 2020 project ONE5G (ICT-760809) receiving funds from the European Union. The authors would like to acknowledge the contributions of their colleagues in the project, although the views expressed in this contribution are those of the authors and do not necessarily represent the project.