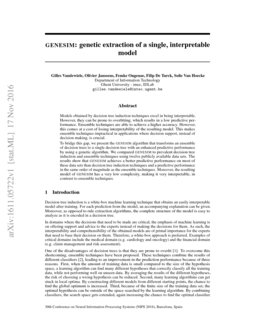 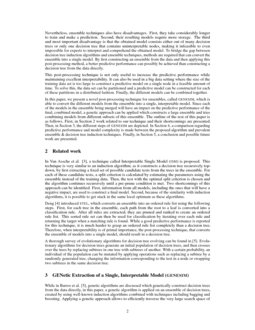 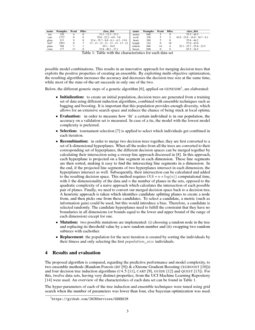 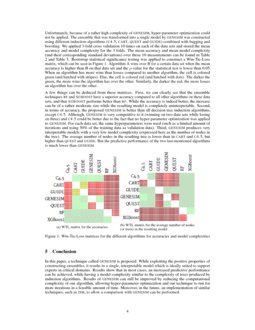 Evolutionary algorithms for constructing an ensemble of decision trees

A Decision Tree Approach to Predicting Recidivism in Domestic Violence

An empirical study on hyperparameter tuning of decision trees

Assessing the Stability of Interpretable Models

Decision tree induction is a white-box machine learning technique that obtains an easily interpretable model after training. For each prediction from the model, an accompanying explanation can be given. Moreover, as opposed to rule extraction algorithms, the complete structure of the model is easy to analyze as it is encoded in a decision tree.

In domains where the decisions that need to be made are critical, the emphasis of machine learning is on offering support and advice to the experts instead of making the decisions for them. As such, the interpretability and comprehensibility of the obtained models are of primal importance for the experts that need to base their decision on them. Therefore, a white-box approach is preferred. Examples of critical domains include the medical domain (e.g. cardiology and oncology) and the financial domain (e.g. claim management and risk assessment).

. To overcome this shortcoming, ensemble techniques have been proposed. These techniques combine the results of different classifiers

, leading to an improvement in the prediction performance because of three reasons. First, when the amount of training data is small compared to the size of the hypothesis space, a learning algorithm can find many different hypotheses that correctly classify all the training data, while not performing well on unseen data. By averaging the results of the different hypotheses, the risk of choosing a wrong hypothesis can be reduced. Second, many learning algorithms can get stuck in local optima. By constructing different models from different starting points, the chance to find the global optimum is increased. Third, because of the finite size of the training data set, the optimal hypothesis can be outside of the space searched by the learning algorithm. By combining classifiers, the search space gets extended, again increasing the chance to find the optimal classifier. Nevertheless, ensemble techniques also have disadvantages. First, they take considerably longer to train and make a prediction. Second, their resulting models require more storage. The third and most important disadvantage is that the obtained model consists either out of many decision trees or only one decision tree that contains uninterpretable nodes, making it infeasible to even impossible for experts to interpret and comprehend the obtained model. To bridge the gap between decision tree induction algorithms and ensemble techniques, methods are required that can convert the ensemble into a single model. By first constructing an ensemble from the data and then applying this post-processing method, a better predictive performance can possibly be achieved than constructing a decision tree from the data directly.

This post-processing technique is not only useful to increase the predictive performance while maintaining excellent interpretability. It can also be used in a big data setting where the size of the training data set is too large to construct a predictive model on a single node in a feasible amount of time. To solve this, the data set can be partitioned and a predictive model can be constructed for each of these partitions in a distributed fashion. Finally, the different models can be combined together.

In this paper, we present a novel post-processing technique for ensembles, called genesim, which is able to convert the different models from the ensemble into a single, interpretable model. Since each of the models in the ensemble being merged will have an impact on the predictive performance of the final, combined model, a genetic approach can be applied which constructs a large ensemble and tries combining models from different subsets of this ensemble. The outline of the rest of this paper is as follows. First, in Section 2 work related to our technique and their shortcomings are presented. Then, in Section 3, the different steps of genesim are depicted. In Section 4, a comparison regarding predictive performance and model complexity is made between the proposed algorithm and prevalent ensemble & decision tree induction techniques. Finally, in Section 5, a conclusion and possible future work are presented.

) is proposed. This technique is very similar to an induction algorithm, as it constructs a decision tree recursively top-down, by first extracting a fixed set of possible candidate tests from the trees in the ensemble. For each of these candidate tests, a split criterion is calculated by estimating the parameters using the ensemble instead of the training data. Then, the test with the optimal split criterion is chosen and the algorithm continues recursively until a pre-prune condition is met. Two shortcomings of this approach can be identified. First, information from all models, including the ones that will have a negative impact, are used to construct a final model. Second, because of the similarity with induction algorithms, it is possible to get stuck in the same local optimum as these algorithms.

Deng deng2014interpreting introduced stel, which converts an ensemble into an ordered rule list using the following steps. First, for each tree in the ensemble, each path from the root to a leaf is converted into a classification rule. After all rules are extracted, they are pruned and ranked to create an ordered rule list. This sorted rule set can then be used for classification by iterating over each rule and returning the target when a matching rule is found. While a good predictive performance is reported for this technique, it is much harder to grasp an ordered rule list completely than a decision tree. Therefore, when interpretability is of primal importance, the post-processing technique, that converts the ensemble of models into a single model, should result in a decision tree.

. Evolutionary algorithms for decision trees generate an initial population of decision trees, and then crosses over the trees by replacing subtrees in one tree with subtrees of another. With a certain probability, an individual of the population can be mutated by applying operations such as replacing a subtree by a randomly generated tree, changing the information corresponding to the test in a node or swapping two subtrees in the same decision tree.

While in Barros et al. Barros2012 , genetic algorithms are discussed which genetically construct decision trees from the data directly, in this paper, a genetic algorithm is applied on an ensemble of decision trees, created by using well-known induction algorithms combined with techniques including bagging and boosting. Applying a genetic approach allows to efficiently traverse the very large search space of possible model combinations. This results in an innovative approach for merging decision trees that exploits the positive properties of creating an ensemble. By exploiting multi-objective optimization, the resulting algorithm increases the accuracy ánd decreases the decision tree size at the same time, while most of the state-of-the-art succeeds in only one of the two.

Below, the different generic steps of a genetic algorithm Sastry2005 , applied on genesim111https://github.com/IBCNServices/GENESIM, are elaborated:

The proposed algorithm is compared, regarding the predictive performance and model complexity, to two ensemble methods (Random Forests (

xgboost DBLP:journals/corr/ChenG16 )) and four decision tree induction algorithms (c4.5 Quinlan1993_2 , cart Breiman1984 , guide loh2009improving and quest loh2008classification ). For this, twelve data sets, having very distinct properties, from the UCI Machine Learning Repository Lichman:2013 were used. An overview of the characteristics of each data set can be found in Table 1.

The hyper-parameters of each of the tree induction and ensemble techniques were tuned using grid search when the number of parameters was lower than four, else bayesian optimization was used. Unfortunately, because of a rather high complexity of genesim, hyper-parameter optimization could not be applied. The ensemble that was transformed into a single model by genesim was constructed using different induction algorithms (c4.5, cart, quest and guide

3 and Table 3. Bootstrap statistical significance testing was applied to construct a Win-Tie-Loss matrix, which can be seen in Figure 1. Algorithm A wins over B for a certain data set when the mean accuracy is higher than B on that data set and the ρ-value for the statistical test is lower than 0.05. When an algorithm has more wins than losses compared to another algorithm, the cell is colored green (and hatched with stripes). Else, the cell is colored red (and hatched with dots). The darker the green, the more wins the algorithm has over the other. Similarly, the darker the red, the more losses an algorithm has over the other.

A few things can be deduced from these matrices. First, we can clearly see that the ensemble techniques rf and xgboost have a superior accuracy compared to all other algorithms on these data sets, and that xgboost performs better than rf. While the accuracy is indeed better, the increase can be of a rather moderate size while the resulting model is completely uninterpretable. Second, in terms of accuracy, the proposed genesim is better than all decision tree induction algorithms, except c4.5. Although, genesim is very competitive to it (winning on two data sets while losing on three) and c4.5 could be better due to the fact that no hyper-parameter optimization was applied to genesim

. For each data set, the same hyperparameters were used (such as a limited amount of iterations and using 50% of the training data as validation data). Third,

In this paper, a technique called genesim is proposed. While exploiting the positive properties of constructing ensembles, it results in a single, interpretable model which is ideally suited to support experts in critical domains. Results show that in most cases, an increased predictive performance can be achieved, while having a model complexity similar to the complexity of trees produced by induction algorithms. Results of genesim can still be improved by reducing the computational complexity of our algorithm, allowing hyper-parameter optimization and our technique to run for more iterations in a feasible amount of time. Moreover, in the future, an implementation of similar techniques, such as ism, to allow a comparison with genesim can be performed.