In this paper we consider the problem of certified static checking of module-like constructs of programming languages. We argue that there are algorithms and properties related to modules that can be defined and proven in an abstract way. We advocate the design of a generic Coq library, which is aimed to provide three building blocks for each checking mechanism: propositional, computable, and correctness proofs. Implemented part of the library is justified by applying it to a certified static checker of an extension of STLC. 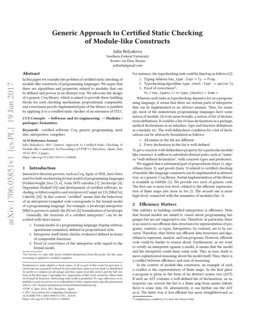 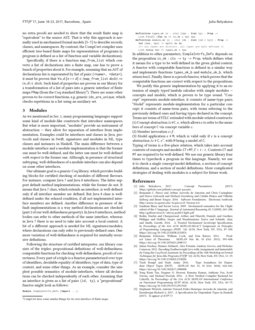 One of the most attractive features of untyped languages is the flexibil...
Nataliia Stulova, et al. ∙

On the Complexity of ATL and ATL* Module Checking

Generic ontologies were introduced as an extension (Generic DOL) of the ...
Mihai Codescu, et al. ∙

A Dependently Typed Library for Static Information-Flow Control in Idris

For instance, the typechecking task could be lined up as follows (Benjamin C. Pierce and Arthur Azevedo de Amorim and Chris Casinghino and Marco Gaboardi and Michael Greenberg and Cǎtǎlin Hriţcu and Vilhelm Sjöberg and Brent Yorgey, 2016):

Whereas such tasks as typechecking depend a lot on a programming language, it seems that there are certain parts of interpreter that can be implemented in an abstract manner. Thus, for example, most of the mainstream programming languages have some notion of module. Or even more broadly, a notion of list of declarations/definitions. It could be a list of class declarations in a package, method declarations in an interface, type and function definitions in a module, etc. The well-definedness condition for a list of declarations can be abstractly formulated as follows:

To get a concrete well-definedness property for a particular module-like construct, it suffices to substitute abstract parts, such as “name” or “well-defined declaration”, with concrete types and predicates.

We suggest that a substantial part of propositions (layer 1), algorithms (layer 2), and proofs (layer 3) related to certified checking of module-like language constructs can be implemented in abstract way, as a generic Coq library. Partial implementation of the library is available in GitHub (Belyakova, 2017). We provide two sorts of generic code. The first one is more low-level, related to the efficient representation of finite maps (see more in Sec. 2). The second one is more high-level, connected with the semantics of modules (Sec. 3).

One subtlety in building certified interpreters is efficiency. Note that formal models are aimed to reason about programming languages but are not supposed to run. Therefore, in particular, there is no need to use efficient data structures for representation of programs, contexts, or types. Interpreters, by contrast, are to be executed. Therefore, they better use efficient data structures and algorithms to represent, analyse, and run programs. However, efficient code could be harder to reason about. Furthermore, as we want to certify an interpreter against a model, it means that the model and the interpreter could share some code. This, in turn, leads to more sophisticated reasoning about the model itself. Thus, there is a conflict between efficiency and ease of reasoning.

In the context of module-like constructs, an example of such a conflict is the representation of finite maps. In the first place a program is given in the form of an abstract syntax tree (AST). If such an AST contains a well-defined list of declarations, an interpreter can convert the list to a finite map from names (identifiers) to some data. Or, alternatively, it can further use the AST as is. The latter way is less efficient but more straightforward, as no extra proofs are needed to show that the result finite map is “equivalent” to the source AST. That is why this approach is normally used in mechanised formal models (Delaware et al., 2011; Rompf and Amin, 2016; Mackay et al., 2012) to describe records, classes, and namespaces. By contrast, the CompCert compiler uses efficient tree-based finite maps for representation of programs (a program is defined as a list of function and variable declarations).

Specifically, if there is a function map_from_list which converts a list of declarations into a finite map, one has to prove a bunch of properties about it. For example, assuming that an AST of declarations list is represented by list of pairs (<name>, <data>), it must be proven that ∀n,d.[n↦d]∈(map_from_list decls)⇒(n,d)∈decls. Such kind of properties are proven in our library for a transformation of a list of pairs into a generic interface of finite maps FMap (from the Coq standard library333CompCert does some similar things for its own interface of finite maps.). There are some other proven-to-be-correct functions, e.g. generic ids_are_unique, which checks repetitions in a list using an auxiliary set.

As we mentioned in Sec. 1, many programming languages support some kind of module-like constructs that introduce namespaces. But what is more important, “modules” provide an instrument of abstraction — they allow for separation of interface from implementation. Examples could be interfaces and classes in Java, protocols and classes in Swift, signatures and modules in ML, type classes and instances in Haskell. The main difference between a module-interface and a module-implementation is that the former one must be well-defined, and the latter one must be well-defined with respect to the former one. Although, in presence of structural subtyping, well-definedness of a module-interface can also depend on some other interfaces.

Our ultimate goal is a generic Coq library, which provides building blocks for certified checking of modules of different flavours. For instance, compare Java 7 and Java 8 interfaces. The latter support default method implementations, while the former do not. It means that Java 7 class, which extends an interface, is well-defined only if all interface member are defined. But Java 8 class is well-defined under the relaxed condition, if all not-implemented interface members are defined. Another difference in presence of default implementations is a way method declarations are checked (part 2 of our well-definedness property). In Java 8 interfaces, method bodies can refer to other methods of the same interface, whereas in Java 7 there is no need to take into account a local context. A bit of a different approach is needed for ML signatures/modules, where declarations can only refer to previously-defined ones. One more variation of well-definedness is required for mutually recursive definitions.

Following the structure of certified interpreter, our library consists of the triples: propositional definitions of well-definedness, computable functions for checking well-definedness, proofs of correctness. Every part of a triple is a functor parameterized over type of identifiers, decidable equality of identifiers, type of data, type of context, and some other things. As an example, consider the simplest possible semantics of module-interfaces, where all declarations can be checked independently of each other. Assuming that an interface is given as a list of pairs (id, ty), a “propositional” functor might look as follows:

In addition to other parameters, SimpleIntrfs_Defs depends on the proposition is_ok:ctx→ty→Prop, which defines what it means for a type to be well-defined in the given global context. A functor with computable functions is defined in a similar way and implements functions types_ok_b and module_ok_b, which return bool. Finally, there is a proofs functor, which proves that the computable functions are correct with respect to the propositions.

We justify this generic implementation by applying it to an extension of simply typed lambda calculus with simple modules — concepts and models, which is proven to be type sound. “Concept” represents module-interface, it consists of name-type pairs. “Model” represents module-implementation for a particular concept: it consists of name-term pairs, with terms referring to the previously defined ones and having types declared in the concept. Terms are terms of STLC extended with module-related constructs: (1) Concept abstraction λc#C.e, which allows e to refer to the members of concept C via concept variable c. (2) Member invocation c::f. (3) Model application e#M, which is valid only if e is a concept abstraction λc#C.e′, with M being a model of C. Typing of terms is a five-place relation, which takes into account contexts of concepts and models: CT∗MT;Γ⊢t:τ. Contexts CT and MT are required to be well-defined. We use our generic library four times to typecheck a program in this language. Namely, we use it to check a single concept/model definition, a section of concept definitions, and a section of model definitions. More complicated strategies of dealing with modules is a subject for future work.