The ambiguity of the decision-making process has been pointed out as the main obstacle to applying the deep learning-based method in a practical way in spite of its outstanding performance. Interpretability could guarantee the confidence of deep learning system, therefore it is particularly important in the medical field. In this study, a novel deep network is proposed to explain the diagnostic decision with visual pointing map and diagnostic sentence justifying result simultaneously. For the purpose of increasing the accuracy of sentence generation, a visual word constraint model is devised in training justification generator. To verify the proposed method, comparative experiments were conducted on the problem of the diagnosis of breast masses. Experimental results demonstrated that the proposed deep network could explain diagnosis more accurately with various textual justifications. 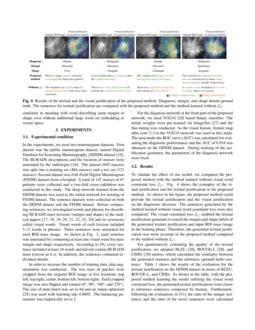 Thanks to the remarkable achievements of deep learning technology, there are various attempts to utilize deep learning technique in many research fields such as image recognition [1, 2] and medical image analysis [3, 4]. Computer-aided detection (CADe) and Computer-aided diagnosis (CADx) also show notable successes with deep learning based approaches [5, 6]. On the contrary, difficulty in understanding the cause of a decision still remain as a dominant limitation for application of deep learning based method in the real world. To cope with this problem, several research efforts [7, 8, 9] have been devoted to developing the method for interpreting the decision of the deep network in recent years . [7, 8] found the specific area of the input image which has the biggest impact on the final result. The multimodal approach [9] reported to generate explanation supporting the decision of deep network in form of attentive pointing map and text.

In medical applications such as CADx, interpretation method reflecting reliability is more important, because it is mainly used in a high-risk environment directly connected to human health. There are several works which utilize prescribed annotation or medical report attached to the medical image as additional information for the decision explanation. [10, 11]

However, it is challenging to generate an accurate sentence with large variation because of the high complexity in the natural language. As addressed in [14], the conventional captioning methods suffer a problem in which the model duplicates a completely identical sentence of the training set even the model is trained on the large dataset. In other words, the deep network tends to memorize every sentence in the training set, which causes the situation that the generated sentence could not describe the target image in detail sufficiently. It becomes a more serious problem in the medical research area due to the limited number of medical report data.

In this study, we propose a novel deep network to provide visual and textual justification interpreting the diagnostic decision. The main contribution of this study is summarized as followings:

2) To overcome the duplication problem in which the model generates a completely identical sentence of the training set, we devise a new learning method with a visual word constraint loss. For evaluating the proposed method, a sentence dataset describing the characteristics (the shape and the margin) of breast masses with the words corresponding Breast Imaging Reporting and Data System (BI-RADS) mass lexicon has been collected in this study. Experimental results have shown that the proposed method could generate various textual justifications which are not just duplication of the sentence in the training dataset by guiding the textual justification generator with the visual word constraint model.

The rest of the paper is organized as follows. In the Section 2, we introduce the proposed diagnostic interpreting network for generating visual and textual justification. At the same time, we describe detail process to construct sentence dataset. Next, experimental results are presented and analyzed in terms of visual and textual justifying ability in Section 3. Finally, Section 4 concludes the paper.

The diagnosis predictor Dφdig make a diagnostic decision ^yd={pbenign,pmalignant} from the visual feature by

^yd is embedded to the channel-wise attention weight αdembed as followings:

where Eφe(⋅) denotes a function with learnable parameter φe

for embedding the diagnostic decision. This embedded vector refines the visual feature with the channel attention as

where αva(n,m) is the 2D map obtained by a function Gφvis(⋅) with learnable parameter φvis. The softmax operation in Eq. (6) was conducted to represent more focused areas and suppress the activation on the background. For obtaining the textual justification, a text generating feature ftext is encoded from the diagnosis embedded feature fembed

where fembed+vis denotes the refined diagnosis embedded feature by the spatial attention as αdvis and the channel-wise attention as αdembed. Tφtest(⋅) is a function with learnable parameter φtest for encoding the text generating feature.Gφvis(⋅) and Tφtest(⋅) are implemented by multiple convolutional layers. Finally, the textual justification W=[w1,w2,⋯] is generated by using the two-hidden-layer-stacked LSTM network fLSTM(⋅) as

In the training stage, the textual difference loss LD is defined as

where textual justification ground truth is WGT=[w1GT,w2GT,⋯,wltextGT] and ltext denotes the number of words in ground truth sentence. In order to overcome the aforementioned duplication problem in the textual justification generation, we devise a visual word constraint model Vcon(⋅). The visual word constraint model is designed as a sentence classifier [15]

are ground truth of margin and shape. As a result, overall network is trained by minimizing following loss function:

where α is a balancing hyper-parameter. By introducing visual word constraint loss, the textual justification could contain more various word. The proposed model could grasp similarity in meaning with word describing same margin or shape even without additional large word set embedding to vector space.

In the experiments, we used two mammogram datasets. First dataset was the public mammogram dataset, named Digital Database for Screening Mammography (DDSM) dataset [16]. The BI-RADS descriptions and the location of masses were annotated by the radiologist [16]. The dataset (605 masses) was split into a training set (484 masses) and a test set (121 masses). Second dataset was Full-Field Digital Mammogram (FFDM) dataset from a hospital. A total of 147 masses of 67 patients were collected and a two-fold cross-validation was conducted in this study. The deep network learned from the DDSM dataset was used as the initial network for training of FFDM dataset. The sentence datasets were collected on both the DDSM dataset and the FFDM dataset. Before composing sentences, we investigated words and phrases for describing BI-RADS mass lexicons (margin and shape) in the medical papers [17, 18, 19, 20, 21, 22, 23, 24] and its synonyms called visual words. Visual words of each lexicon included 5-12 words or phrases. Three sentences were annotated for each ROI mass image. As shown in Fig. 3, each sentence was annotated by containing at least one visual word for mass margin and shape respectively. According to [9], every sentence included at least 10 words and did not contain BI-RADS mass lexicon as it is. In addition, the sentences contained individual details.

In order to increase the number of training data, data augmentation was conducted. The two sizes of patches were cropped from the original ROI image at five locations (top left, top right, center, bottom left, bottom right). Each cropped image was also flipped and rotated (0°, 90°, 180°, and 270°). The size of mini-batch was set to 64 and an Adam optimizer [25] was used with learning rate 0.0005. The balancing parameter was empirically set to 2.

For the diagnosis network at the front part of the proposed network, we used VGG16 [26]

based binary classifier. The initial weights were pre-trained via ImageNet

[27] and the fine-tuning was conducted. As the visual feature, feature map after conv 5_3 in the VGG16 network was used in this study. The area under the ROC curve (AUC) was calculated for evaluating the diagnostic performance and the AUC of 0.918 was obtained on the DDSM dataset. During training of the justification generator, the parameters of the diagnosis network were fixed.