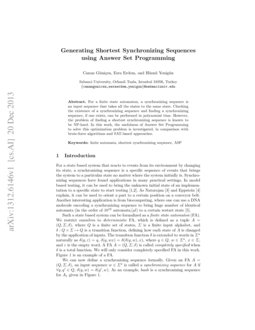 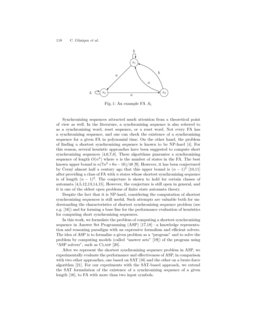 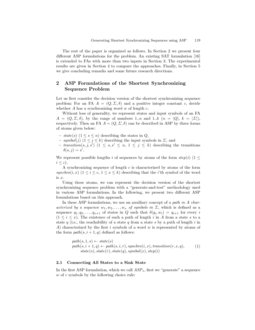 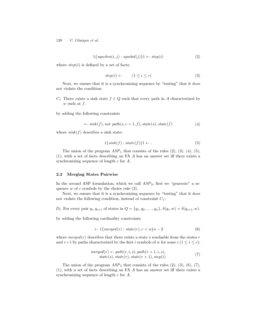 For a state based system that reacts to events from its environment by changing its state, a synchronizing sequence is a specific sequence of events that brings the system to a particular state no matter where the system initially is. Synchronizing sequences have found applications in many practical settings. In model based testing, it can be used to bring the unknown initial state of an implementation to a specific state to start testing [1, 2]. As Natarajan [3] and Eppstein [4] explain, it can be used to orient a part to a certain position on a conveyor belt. Another interesting application is from biocomputing, where one can use a DNA molecule encoding a synchronizing sequence to bring huge number of identical automata (in the order of 1012 automata/μl) to a certain restart state [5].

Such a state based system can be formalized as a finite state automaton (FA). We restrict ourselves to deterministic FA, which is defined as a tuple A=(Q,Σ,δ), where Q is a finite set of states, Σ is a finite input alphabet, and δ:Q×Σ↦Q is a transition function, defining how each state of A is changed by the application of inputs. The transition function δ is extended to words in Σ⋆ naturally as δ(q,ε)=q, δ(q,wx)=δ(δ(q,w),x), where q∈Q, w∈Σ⋆, x∈Σ, and ε is the empty word. A FA A=(Q,Σ,δ) is called completely specified when δ is a total function. We will only consider completely specified FA in this work. Figure 1 is an example of a FA.

. For this reason, several heuristic approaches have been suggested to compute short synchronizing sequences

[4, 6, 7, 8]. These algorithms guarantee a synchronizing sequence of length O(n3) where n is the number of states in the FA. The best known upper bound is n(7n2+6n−16)/48 [9]. However, it has been conjectured by Černý almost half a century ago that this upper bound is (n−1)2 [10, 11] after providing a class of FA with n states whose shortest synchronizing sequence is of length (n−1)2. The conjecture is shown to hold for certain classes of automata [4, 5, 12, 13, 14, 15]. However, the conjecture is still open in general, and it is one of the oldest open problems of finite state automata theory.

In this work, we formulate the problem of computing a shortest synchronizing sequence in Answer Set Programming (ASP) [17, 18]—a knowledge representation and reasoning paradigm with an expressive formalism and efficient solvers. The idea of ASP is to formalize a given problem as a “program” and to solve the problem by computing models (called “answer sets” [19]) of the program using “ASP solvers”, such as Clasp [20].

After we represent the shortest synchronizing sequence problem in ASP, we experimentally evaluate the performance and effectiveness of ASP, in comparison with two other approaches, one based on SAT [16] and the other on a brute-force algorithm [21]. For our experiments with the SAT-based approach, we extend the SAT formulation of the existence of a synchronizing sequence of a given length [16], to FA with more than two input symbols.

The rest of the paper is organized as follows. In Section 2 we present four different ASP formulations for the problem. An existing SAT formulation [16] is extended to FAs with more than two inputs in Section 3. The experimental results are given in Section 4 to compare the approaches. Finally, in Section 5 we give concluding remarks and some future research directions.

Let us first consider the decision version of the shortest synchronizing sequence problem: For an FA A=(Q,Σ,δ) and a positive integer constant c, decide whether A has a synchronizing word w of length c.

Without loss of generality, we represent states and input symbols of an FA A=(Q,Σ,δ), by the range of numbers 1..n and 1..k (n=|Q|, k=|Σ|), respectively. Then an FA A=(Q,Σ,δ) can be described in ASP by three forms of atoms given below:

We represent possible lengths i of sequences by atoms of the form \it step\/(i) (1≤i≤c).

A synchronizing sequence of length c is characterized by atoms of the form \it synchro\/(i,x) (1≤i≤c, 1≤x≤k) describing that the i’th symbol of the word is x.

Using these atoms, we can represent the decision version of the shortest synchronizing sequence problem with a “generate-and-test” methodology used in various ASP formulations. In the following, we present two different ASP formulations based on this approach.

In these ASP formulations, we use an auxiliary concept of a path in A characterized by a sequence w1,w2,…,wx of symbols in Σ, which is defined as a sequence q1,q2,…,qx+1 of states in Q such that δ(qi,wi)=qi+1 for every i (1≤i≤x). The existence of such a path of length i in A from a state s to a state q (i.e., the reachability of a state q from a state s by a path of length i in A) characterized by the first i symbols of a word w is represented by atoms of the form \it path\/(s,i+1,q) defined as follows:

2.1 Connecting All States to a Sink State

In the first ASP formulation, which we call \it ASP\/1, first we “generate” a sequence w of c symbols by the following choice rule:

Next, we ensure that it is a synchronizing sequence by “testing” that it does not violate the condition:

by adding the following constraints

where \it sink\/(f) describes a sink state:

In the second ASP formulation, which we call \it ASP\/2, first we “generate” a sequence w of c symbols by the choice rule (2).

Next, we ensure that it is a synchronizing sequence by “testing” that it does not violate the following condition, instead of constraint C1:

by adding the following cardinality constraints

where \it merged\/(r) describes that there exists a state s reachable from the states r and r+1 by paths characterized by the first i symbols of w for some i (1≤i≤c):

In this section, we present another ASP formulation where we let the ASP solver first decide the length l of a shortest synchronizing sequence, where l≤c:

and declare possible lengths of sequences:

Next, we ensure that l is indeed the optimal value, by the following optimization statement

We first define a boolean operator ∇ that will simplify the description of our SAT formulation. For a given set of boolean variables {r1,r2,…,rk}, we define ∇{r1,r2,⋯,rk} as follows:

Checking the existence of a synchronizing sequence of length c is converted into a SAT problem by considering the following boolean formulae. Below we use the notation [c] to denote the set {1,2,…,c}.

In this section, we present the experimental study carried out to compare the performance of the ASP formulations, the SAT formulation, and the brute–force algorithm for generating a shortest synchronizing sequence.

We first present our experiments using finite automata that are generated randomly. Given the number of states and the number of input symbols, an FA is generated by assigning the next state of each transition randomly. If the FA generated in this way does not have a synchronizing sequence, then it is discarded. Otherwise, it is included in the set of FAs used in our experiments. We generated 100 random FAs this way for each number of states we used in the experiments (except for the biggest set of tests with 50 states and 4-6 input symbols, where we use only 50 FAs to speed up the experiments).

We implemented tools that create ASP and SAT formulations from a given FA and an integer constant c as explained in Section 2, Section 3, and also the SAT formulation given in [16] for FAs with two inputs only.

We also experimented with finite state automata from MCNC’91 benchmarks [24]. We used only those finite state machine examples in this benchmark set that correspond to completely specified finite state automata. The results of these experiments are given in Table 5 for the time comparison. We obtained similar results to what we have observed in our experiments on random finite state automata. The time performance of the ASP approaches are better than the SAT approach in these experiments as well. We note that the benchmark example “dk16”, which is also the automaton having the largest number of states, has the longest running time among the automata in the benchmark set. However, the running time does not depend only on the number of states. The number of input symbols and the length of the shortest synchronizing sequence would also have an effect. For the comparison of the memory used for these examples, all ASP approaches used around 6 MBytes of memory, whereas the SAT approach used minimum 6 MBytes and maximum 38 MBytes memory for these experiments.

In this paper, the problem of finding a shortest synchronizing sequence for a FA is formulated in ASP. Four different ASP formulations are given. Also an extension of the SAT formulation of the same problem given in [16] is suggested.