Generating Randomness from a Computable, Non-random Sequence of Qubits 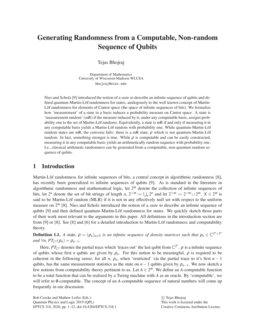 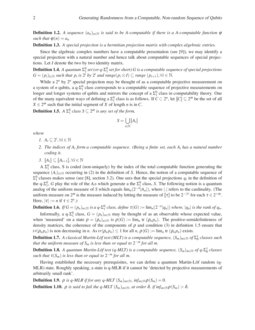 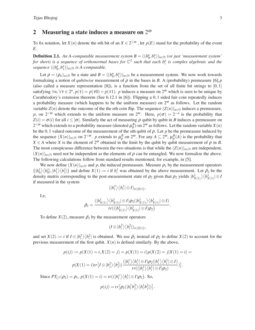 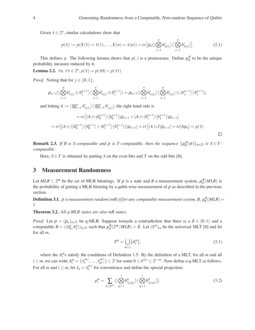 Here, PTC2 denotes the partial trace which ‘traces out’ the last qubit from C2n. ρ is a infinite sequence of qubits whose first n qubits are given by ρn. For this notion to be meaningful, ρ is required to be coherent in the following sense; for all n, ρn, when ‘restricted’ via the partial trace to it’s first n−1 qubits, has the same measurement statistics as the state on n−1 qubits given by ρn−1. We now sketch a few notions from computability theory pertinent to us. Let A∈2ω. We define an A

A as an oracle. By ‘computable’, we will refer to ∅-computable. The concept of an A-computable sequence of natural numbers will come up frequently in our discussion.

A special projection is a hermitian projection matrix with complex algebraic entries.

While a 2n by 2n special projection may be thought of as a computable projective measurement on a system of n qubits, a q-Σ01 class corresponds to a computable sequence of projective measurements on longer and longer systems of qubits and mirrors the concept of a Σ01 class in computability theory. One of the many equivalent ways of defining a Σ01 class is as follows. If C⊂2n, let ⟦C⟧⊆2ω be the set of all X∈2ω such that the initial segment of X of length n is in C.

A Σ01 class, S is coded (non-uniquely) by the index of the total computable function generating the sequence (Ai)i∈N occurring in (2) in the definition of S. Hence, the notion of a computable sequence of Σ01 classes makes sense (see [9], section 3.2). One sees that the special projections qi in the definition of the q-Σ01, G play the role of the Ais which generate a the Σ01 class, S. The following notion is a quantum analog of the uniform measure of S which equals limn(2−n|An|), where |.| refers to the cardinality. (The uniform measure on 2ω is the measure induced by letting the measure of ⟦τ⟧ to be 2−|τ| for each τ∈2<ω. Here, |τ|:=n if τ∈2n.)

Informally, a q-Σ01 class, G=(pn)n∈N may be thought of as an observable whose expected value, when ‘measured’ on a state ρ=(ρn)n∈N is ρ(G):=limn tr (ρnpn). The positive-semidefiniteness of density matrices, the coherence of the components of ρ and condition (3) in definition 1.5 ensure that tr(ρnpn) is non decreasing in n. As tr(ρnpn)≤1 for all n, ρ(G):=limn tr (ρnpn) exists.

A classical Martin-Löf test (MLT) is a computable sequence, (Sm)m∈N of Σ10 classes such that the uniform measure of Sm is less than or equal to 2−m for all m.

A quantum Martin-Löf test (q-MLT) is a computable sequence, (Sm)m∈N of q-Σ10 classes such that τ(Sm) is less than or equal to 2−m for all m.

Having established the necessary prerequisites, we can define a quantum Martin-Löf random (q-MLR) state. Roughly speaking, a state is q-MLR if it cannot be ‘detected by projective measurements of arbitrarily small rank’.

2 Measuring a state induces a measure on 2ω

To fix notation, let X(n) denote the nth bit of an X∈2≤ω , let p(E) stand for the probability of the event E.

Let ρ=(ρn)n∈N be a state and B=((bn0,bn1))n∈N be a measurement system. We now work towards formalizing a notion of qubitwise measurement of ρ in the bases in B. A (probability) premeasure [7],p (also called a measure representation [9]), is a function from the set of all finite bit strings to [0,1] satisfying ∀n, ∀τ∈2n,p(τ)=p(τ0)+p(τ1). p induces a measure on 2ω which is seen to be unique by Carathéodory’s extension theorem (See 6.12.1 in [7]). Flipping a 0,1 sided fair coin repeatedly induces a probability measure (which happens to be the uniform measure) on 2ω

as follows. Let the random variable

Z(n) denote the outcome of the the nth coin flip. The sequence (Z(n))n∈N induces a premeasure, p, on 2<ω which extends to the uniform measure on 2ω. Here, p(σ)=2−n is the probability that Z(i)=σ(i) for all i≤|σ|. Similarly the act of measuring ρ qubit by qubit in B induces a premeasure on 2<ω which extends to a probability measure (denoted μBρ) on 2ω as follows. Let the random variable X(n) be the 0,1 valued outcome of the measurement of the nth qubit of ρ. Let p be the premeasure induced by the sequence (X(n))n∈N on 2<ω. p extends to μBρ on 2ω. For any A⊆2ω, μBρ(A) is the probability that X∈A where X is the element of 2ω obtained in the limit by the qubit by qubit measurement of ρ in B. The most conspicuous difference between the two situations is that while the (Z(n))n∈N are independent, (X(n))n∈N need not be independent as the elements of ρ can be entangled. We now formalize the above. The following calculations follow from standard results mentioned, for example, in [6].

We now define (X(n))n∈N and p, the induced premeasure. Measure ρ1 by the measurement operators {|b10⟩⟨b10|,|b11⟩⟨b11|} and define X(1):=i if b1i was obtained by the above measurement. Let ^ρ2 be the density matrix corresponding to the post-measurement state of ρ2 given that ρ2 yields |b1X(1)⟩⟨b1X(1)|⊗I if measured in the system

To define X(2), measure ^ρ2 by the measurement operators

and set X(2):=i if I⊗|b2i⟩⟨b2i| is obtained. We use ^ρ2 instead of ρ2 to define X(2) to account for the previous measurement of the first qubit. X(n) is defined similarly. By the above,

Given τ∈2n, similar calculations show that

This defines p. The following lemma shows that p(.) is a premeasure. Define μBρ to be the unique probability measure induced by it.

Here, S⊕T is obtained by putting S on the even bits and T

on the odd bits

Let MLR⊂2ω be the set of MLR bitstrings. If ρ is a state and B a measurement system, μBρ(MLR) is the probability of getting a MLR bitstring by a qubit-wise measurement of ρ as described in the previous section.

where the Amis satisfy the conditions of Definition 1.5. By the definition of a MLT, for all m and all i≥m, we can write Ami={τm,i1,…,τm,ikm,i}⊂2i for some 0≤km,i≤2i−m. Now define a q-MLT as follows. For all m and i≥m, let τa=τm,ia for convenience and define the special projection:

There is a computable state which is not q-MLR but is mR.

Clearly, dn is a density matrix. The theorem will be proved via the following lemmas.

It is easy to see that zero has multiplicity rn

as an eigenvalue of

Fix a N>5. By properties of the Kronecker product, SN

has a orthonormal basis of eigenvectors:

and ⨂Nn=5vnl(n) has eigenvalue ∏Nn=5αnl(n). Letting MN be those elements of the above eigenbasis having non-zero eigenvalues, we have that

By the definition of qn,

for k>γ(N). Using that ρ is computable, it is easy to see that (pk)k∈N is a q-Σ01 class. Let Tm:=(pk)k∈N. (Tm)m∈N is a q-MLT since the choice of N(m) implies that τ(Tm)<2−m and as N(m) can be computed from m. (Tm)m∈N demonstrates that ρ is not q-MLR as follows. Fix m arbitrarily and let N(m) be as above. Recalling that MN is the set consisting of all eigenvectors of SN with non-zero eigenvalue, we have that,

The following technical lemma, although seems unmotivated at this juncture, is crucial at a later point in the proof.

be a set of unit column vectors in

For natural numbers u and q, let [u]q denote the remainder obtained by dividing u by q. We use the following convention for the Kronecker product [11]:

This proves the lemma. Intuitively, this happens for the following reason. Imagine moving from v1 to v2n−1 (by incrementing k) and keeping track of the values of cki as you move along the vks. Also, imagine moving from v2n to v2n−1 and keeping track of the values of eki as you move along the v2n−k+1s. Both motions are in opposite directions since as k is incremented, the first motion is from lower to higher indices and the second is from higher to lower indices. Consider the behavior of ck1,ek1 as k is incremented. At the ‘start’ point, c11=a1, e11=b1. Now, as you move (i.e as you increment k), ck1 alternates between a1 and b1 equalling it’s starting value, a1 at odd ks and ek1 alternates between b1 and a1 equalling it’s starting value b1 for odd ks. Now, take any i≤n. cki alternates between ai and bi in blocks of length 2i−1. cki=ai when k is in the first block, {1,2,…,2i−1} (i.e, when [k]2i∈{1,2,…,2i−1}) and cki=bi when k is in the second block, {2i−1+1,…,2i}(i.e, when [k]2i∈{2i−1+1,…,0}) and so on. Similarly, eki alternates between bi and ai in blocks of length 2i−1. ∎

Fix n and V as in the statement and write dn as a block matrix with each block of size 2n−1 by 2n−1.

By the form of B we get,

By the previous lemma,

Since x√1−x2 has a maximum value of 1/2 and recalling definition of rn,

Let B be any computable measurement system. We show that MLR(μBρ)⊆MLR. Since μBρ[MLR(μBρ)]=1, this implies that μBρ(MLR)=1. Denote μBρ by μ for convenience. Let λ denote the uniform measure. We will abuse notation by writing μ(τ) instead of the more cumbersome μ(⟦τ⟧) for τ∈2<ω. Let X∈MLR(μ). Write X as a concatenation of finite bitstrings : X=σ5σ6…σn… where σn∈2n for all n∈N. Let Sn:=σ5σ6…σn be the concatenation upto n. Let μi be such that for all τ∈2i,

By these inequalities and taking exponents, we see that there is a constant α>0 such that