Efficiently building an adversarial attacker for natural language processing (NLP) tasks is a real challenge. Firstly, as the sentence space is discrete, it is difficult to make small perturbations along the direction of gradients. Secondly, the fluency of the generated examples cannot be guaranteed. In this paper, we propose MHA, which addresses both problems by performing Metropolis-Hastings sampling, whose proposal is designed with the guidance of gradients. Experiments on IMDB and SNLI show that our proposed MHA outperforms the baseline model on attacking capability. Adversarial training with MAH also leads to better robustness and performance. 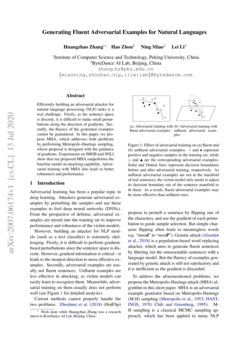 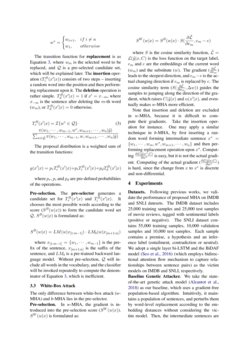 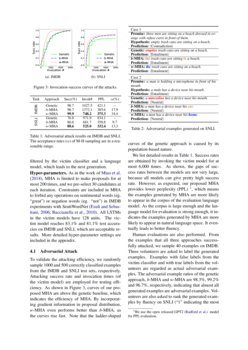 Adversarial learning has been a popular topic in deep learning. Attackers generate adversarial examples by perturbing the samples and use these examples to fool deep neural networks (DNNs). From the perspective of defense, adversarial examples are mixed into the training set to improve performance and robustness of the victim models.

However, building an attacker for NLP models (such as a text classifier) is extremely challenging. Firstly, it is difficult to perform gradient-based perturbations since the sentence space is discrete. However, gradient information is critical – it leads to the steepest direction to more effective examples. Secondly, adversarial examples are usually not fluent sentences. Unfluent examples are less effective in attacking, as victim models can easily learn to recognize them. Meanwhile, adversarial training on them usually does not perform well (see Figure

Current methods cannot properly handle the two problems. Ebrahimi et al. (2018) (HotFlip) propose to perturb a sentence by flipping one of the characters, and use the gradient of each perturbation to guide sample selection. But simple character flipping often leads to meaningless words (eg. “mood” to “mooP”). Genetic attack (Alzantot et al., 2018) is a population-based word replacing attacker, which aims to generate fluent sentences by filtering out the unreasonable sentences with a language model. But the fluency of examples generated by genetic attack is still not satisfactory and it is inefficient as the gradient is discarded.

To address the aforementioned problems, we propose the Metropolis-Hastings attack (MHA) algorithm in this short paper. MHA is an adversarial example generator based on Metropolis-Hastings (M-H) sampling (Metropolis et al., 1953; HASTINGS, 1970; Chib and Greenberg, 1995)

. M-H sampling is a classical MCMC sampling approach, which has been applied to many NLP tasks, such as natural language generation

Our contributions include that we propose an efficient approach for generating fluent adversarial examples. Experimental results on IMDB (Maas et al., 2011) and SNLI  (Bowman et al., 2015) show that, compared with the state-of-the-art genetic model, MHA generates examples faster, achieving higher success rates with much fewer invocations. Meanwhile, adversarial samples from MHA are not only more fluent but also more effective to improve the adversarial robustness and classification accuracy after adversarial training.

Generally, adversarial attacks aim to mislead the neural models by feeding adversarial examples with perturbations, while adversarial training aims to improve the models by utilizing the perturbed examples. Adversarial examples fool the model into producing erroneous outputs, such as irrelevant answers in QA systems or wrong labels in text classifiers (Figure 2). Training with such examples may enhance performance and robustness.

Definitions of the terms in this paper are as follow. The victim models are word-level classifiers, which take in tokenized sentences and output their labels. The attackers generate sentences by perturbing the original ones, in order to mislead the victim model into making mistakes. Adversarial attacks include two categories: (a) black-box attack only allows the attackers to have access to model outputs, while (b) white-box attack allows full access to the victim model, including model outputs, gradients and (hyper-)parameters. For adversarial training, the same victim model is trained from scratch on an updated training set with adversarial examples included.

In this section, we first introduce M-H sampling briefly, and then describe how to apply M-H sampling efficiently to generate adversarial examples for natural language.

The M-H algorithm is a classical Markov chain Monte Carlo sampling approach. Given the stationary distribution (

π(x)) and transition proposal, M-H is able to generate desirable examples from π(x). Specifically, at each iteration, a proposal to jump from x to x′ is made based on the proposal distribution (g(x′|x)

). The proposal is accepted with a probability given by the acceptance rate:

Once accepted, the algorithm jumps to x′. Otherwise, it stays at x.

In black-box attack (b-MHA), we expect the examples to meet three requirements: (a) to read fluently; (b) to be able to fool the classifier; (c) to invoke the classifier for as few times as possible.

Transition proposal. There are three word-level transition operations – replacement, insertion and deletion. Traversal indexing is applied to select words on which operations are performed. Suppose MHA selects the i-th word (wi) on the t-th proposal, then on the (t+1)-th proposal, the selected word (w∗) is:

The transition function for replacement is as Equation 3, where wm is the selected word to be replaced, and Q is a pre-selected candidate set, which will be explained later. The insertion operation (TBi(x′|x)) consists of two steps – inserting a random word into the position and then performing replacement upon it. The deletion operation is rather simple. TBd(x′|x)=1 if x′=x−m, where x−m is the sentence after deleting the m-th word (wm), or TBd(x′|x)=0 otherwise.

The proposal distribution is a weighted sum of the transition functions:

where pr, pi and pd are pre-defined probabilities of the operations.

The pre-selector generates a candidate set for TBr(x′|x) and TBi(x′|x). It chooses the most possible words according to the score (SB(w|x)) to form the candidate word set Q. SB(w|x) is formulated as:

where x[1:m−1]={w1,⋯,wm−1} is the prefix of the sentence, x[m+1:n] is the suffix of the sentence, and LMb is a pre-trained backward language model. Without pre-selection, Q will include all words in the vocabulary, and the classifier will be invoked repeatedly to compute the denominator of Equation 3, which is inefficient.

The only difference between white-box attack (w-MHA) and b-MHA lies in the pre-selector.

Pre-selection. In w-MHA, the gradient is introduced into the pre-selection score (SW(w|x)). SW(w|x) is formulated as:

is the cosine similarity function,

is the loss function on the target label,

em and e are the embeddings of the current word (wm) and the substitute (w). The gradient (∂~L∂em) leads to the steepest direction, and em−e is the actual changing direction if em is replaced by e. The cosine similarity term (S(∂~L∂wm,Δw)) guides the samples to jumping along the direction of the gradient, which raises C(~y|x) and α(x′|x), and eventually makes w-MHA more efficient.

Note that insertion and deletion are excluded in w-MHA, because it is difficult to compute their gradients. Take the insertion operation for instance. One may apply a similar technique in b-MHA, by first inserting a random word forming intermediate sentence x∗={w1,⋯,wm,w∗,wm+1,⋯,wn} and then performing replacement operation upon x∗. Computing ∂L(~y|x∗,C)∂w∗ is easy, but it is not the actual gradient. Computing of the actual gradient (∂L(~y|x,C)∂w∗) is hard, since the change from x to x∗ is discrete and non-differential.

Datasets. Following previous works, we validate the performance of proposed MHA on IMDB and SNLI datesets. The IMDB dataset includes 25,000 training samples and 25,000 test samples of movie reviews, tagged with sentimental labels (positive or negative). The SNLI dataset contains 55,000 training samples, 10,000 validation samples and 10,000 test samples. Each sample contains a premise, a hypothesis and an inference label (entailment, contradiction or neutral). We adopt a single layer bi-LSTM and the BiDAF model (Seo et al., 2016) (which employs bidirectional attention flow mechanism to capture relationships between sentence pairs) as the victim models on IMDB and SNLI, respectively.

Baseline Genetic Attacker. We take the state-of-the-art genetic attack model (Alzantot et al., 2018) as our baseline, which uses a gradient-free population-based algorithm. Intuitively, it maintains a population of sentences, and perturbs them by word-level replacement according to the embedding distances without considering the victim model. Then, the intermediate sentences are filtered by the victim classifier and a language model, which leads to the next generation.

Hyper-parameters. As in the work of miao2018cgmh, MHA is limited to make proposals for at most 200 times, and we pre-select 30 candidates at each iteration. Constraints are included in MHA to forbid any operations on sentimental words (eg. “great”) or negation words (eg. “not”) in IMDB experiments with SentiWordNet (Esuli and Sebastiani, 2006; Baccianella et al., 2010). All LSTMs in the victim models have 128 units. The victim model reaches 83.1% and 81.1% test accuracies on IMDB and SNLI, which are acceptable results. More detailed hyper-parameter settings are included in the appendix.

To validate the attacking efficiency, we randomly sample 1000 and 500 correctly classified examples from the IMDB and SNLI test sets, respectively. Attacking success rate and invocation times (of the victim model) are employed for testing efficiency. As shown in Figure 3, curves of our proposed MHA are above the genetic baseline, which indicates the efficiency of MHA. By incorporating gradient information in proposal distribution, w-MHA even performs better than b-MHA, as the curves rise fast. Note that the ladder-shaped curves of the genetic approach is caused by its population-based nature.

Human evaluations are also performed. From the examples that all three approaches successfully attacked, we sample 40 examples on IMDB. Three volunteers are asked to label the generated examples. Examples with false labels from the victim classifier and with true labels from the volunteers are regarded as actual adversarial examples. The adversarial example ratios of the genetic approach, b-MHA and w-MHA are 98.3%, 99.2% and 96.7%, respectively, indicating that almost all generated examples are adversarial examples. Volunteers are also asked to rank the generated examples by fluency on SNLI (“1” indicating the most fluent while “3” indicating the least fluent). 20 examples are sampled in the same manners mentioned above. The mean values of ranking of the genetic approach, b-MHA and w-MHA are 1.93, 1.80 and 2.03, indicating that b-MHA generates the most fluent samples. Samples generated by w-MHA are less fluent than the genetic approach. It is possibly because the gradient introduced into the pre-selector could influence the fluency of the sentence, from the perspective of human beings.

Adversarial examples from different models on SNLI are shown in Table 2. The genetic approach may replace verbs with different tense or may replace nouns with different plurality, which can cause grammatical mistakes (eg. Case 1), while MHA employs the language model to formulate the stationary distribution in order to avoid such grammatical mistakes. MHA does not have constraints that word replacement should have similar meanings. MHA may replace entities or verbs with some irrelevant words, leading to meaning changes of the original sentence (eg. Case 2). More cases are included in the appendix.

In order to validate whether adversarial training is helpful for improving the adversarial robustness or classification accuracy of the victim model, a new model is trained from scratch after mixing the generated examples into the training set.

Current MHA returns the examples when the label is changed, which may lead to incomplete sentences, which are unfluent from the perspective of human beings. Constraints such as forcing the model to generate ⟨EOS⟩ at the end of the sentence before returning may address this issue.

Also, entity and verb replacements without limitations have negative influence on adversarial example generations for tasks such as NLI. Limitations of similarity during word operations are essential to settle the problem. Constraints such as limitation of the embedding distance may help out. Another solution is introducing the inverse of embedding distance in the pre-selection source.