In education, open-ended quiz questions have become an important tool for assessing the knowledge of students. Yet, manually preparing such questions is a tedious task, and thus automatic question generation has been proposed as a possible alternative. So far, the vast majority of research has focused on generating the question text, relying on question answering datasets with readily picked answers, and the problem of how to come up with answer candidates in the first place has been largely ignored. Here, we aim to bridge this gap. In particular, we propose a model that can generate a specified number of answer candidates for a given passage of text, which can then be used by instructors to write questions manually or can be passed as an input to automatic answer-aware question generators. Our experiments show that our proposed answer candidate generation model outperforms several baselines. 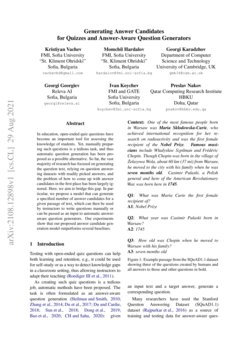 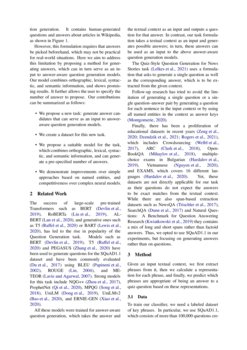 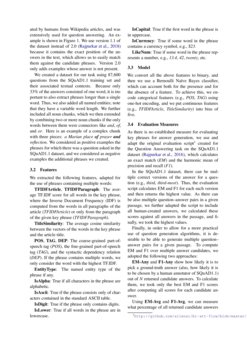 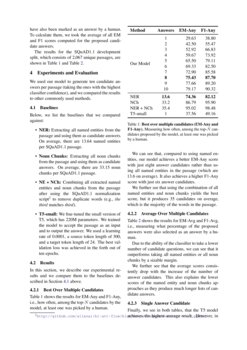 The ability to ask questions is important in both human and machine inte...
Bang Liu, et al. ∙

Answer retrieval is to find the most aligned answer from a large set of ...
Wenhao Yu, et al. ∙

Testing with open-ended quiz questions can help both learning and retention, e.g., it could be used for self-study or as a way to detect knowledge gaps in a classroom setting, thus allowing instructors to adapt their teaching (Roediger III et al., 2011).

(Rajpurkar et al., 2016) as a source of training and testing data for answer-aware question generation. It contains human-generated questions and answers about articles in Wikipedia, as shown in Figure 1.

However, this formulation requires that answers be picked beforehand, which may not be practical for real-world situations. Here we aim to address this limitation by proposing a method for generating answers, which can in turn serve as an input to answer-aware question generation models. Our model combines orthographic, lexical, syntactic, and semantic information, and shows promising results. It further allows the user to specify the number of answer to propose. Our contributions can be summarized as follows:

The Quiz-Style Question Generation for News Stories task (Lelkes et al., 2021) uses a formulation that asks to generate a single question as well as the corresponding answer, which is to be extracted from the given context.

Finally, there has been a proliferation of educational datasets in recent years (Zeng et al., 2020; Dzendzik et al., 2021; Rogers et al., 2021), which includes Crowdsourcing (Welbl et al., 2017), ARC (Clark et al., 2018), OpenBookQA (Mihaylov et al., 2018), multiple-choice exams in Bulgarian (Hardalov et al., 2019), Vietnamese (Nguyen et al., 2020), and EXAMS, which covers 16 different languages (Hardalov et al., 2020). Yet, these datasets are not directly applicable for our task as their questions do not expect the answers to be exact matches from the textual context. While there are also span-based extraction datasets such as NewsQA (Trischler et al., 2017), SearchQA (Dunn et al., 2017) and Natural Questions: A Benchmark for Question Answering Research (Kwiatkowski et al., 2019) they contains a mix of long and short spans rather than factoid answers. Thus, we opted to use SQuAD1.1 in our experiments, but focusing on generating answers rather than on questions.

Given an input textual context, we first extract phrases from it, then we calculate a representation for each phrase, and finally, we predict which phrases are appropriate of being an answer to a quiz question based on these representations.

To train our classifier, we need a labeled dataset of key phrases. In particular, we use SQuAD1.1, which consists of more than 100,000 questions created by humans from Wikipedia articles, and was extensively used for question answering. An example is shown in Figure

1. We use version 1.1 of the dataset instead of 2.0 (Rajpurkar et al., 2018) because it contains the exact position of the answers in the text, which allows us to easily match them against the candidate phrases. Version 2.0 only adds examples whose answer is not present.

We created a dataset for our task using 87,600 questions from the SQuAD1.1 training set and their associated textual contexts. Because only 33% of the answers consisted of one word, it is important to also extract phrases longer than a single word. Thus, we also added all named entities; note that they have a variable word length. We further included all noun chunks, which we then extended by combining two or more noun chunks if the only words between them were connectors like and, of, and or. Here is an example of a complex chunk with three pieces: a Marian place of prayer and reflection. We considered as positive examples the phrases for which there was a question asked in the SQuAD1.1 dataset, and we considered as negative examples the additional phrases we created.

We extracted the following features, adapted for the use of phrases containing multiple words:

TFIDFArticle, TFIDFParagraph: The average TF.IDF score for all words in the key phrase, where the Inverse Document Frequency (IDF) is computed from the words in all paragraphs of the article (TFIDFArticle) or only from the paragraph of the given key phrase (TFIDFParagraph).

: The average cosine similarity between the vectors of the words in the key phrase and the article title.

EntityType: The named entity type of the phrase if any.

IsAlpha: True if all characters in the phrase are alphabetic.

IsAscii: True if the phrase consists only of characters contained in the standard ASCII table.

IsDigit: True if the phrase only contains digits.

IsLower: True if all words in the phrase are in lowercase.

IsCapital: True if the first word in the phrase is in uppercase.

IsCurrency: True if some word in the phrase contains a currency symbol, e.g., $23.

We convert all the above features to binary, and then we use a Bernoulli Naïve Bayes classifier, which can account both for the presence and for the absence of a feature. To achieve this, we encode categorical features (e.g., POS, TAG

As there is no established measure for evaluating key phrases for answer generation, we use and adapt the original evaluation script111http://github.com/allenai/bi-att-flow/blob/master/squad/evaluate-v1.1.py created for the Question Answering task on the SQuAD1.1 dataset (Rajpurkar et al., 2016), which calculates an exact match (EM

) and the harmonic mean of precision and recall (

In the SQuAD1.1 dataset, there can be multiple correct versions of the answer for a question (e.g., third, third-most). Thus, the evaluation script calculates EM and F1 for each such version and then returns the highest value. As there can be also multiple question–answer pairs in a given passage, we further adapted the script to include all human-created answers, we calculated these scores against all answers in the passage, and finally, we took the highest values.

Finally, in order to allow for a more practical use of question generation algorithms, it is desirable to be able to generate multiple question–answer pairs for a given passage. To compute EM and F1 over multiple answer candidates, we adopted the following two approaches:

The results for the SQuAD1.1 development split, which consists of 2,067 unique passages, are shown in Table 1 and Table 2.

We used our model to generate ten candidate answers per passage (taking the ones with the highest classifier confidence), and we compared the results to other commonly used methods.

Below, we list the baselines that we compared against:

In this section, we describe our experimental results and we compare them to the baselines described in Section 4.1 above.

Table 1 shows the results for EM-Any and F1-Any, i.e., how often, among the top-N candidates by the model, at least one was picked by a human.

We further see that using the combination of all named entities and noun chunks yields the best score, but it produces 35 candidates on average, which is the majority of the words in the passage.

Table 2 shows the results for EM-Avg and F1-Avg, i.e., measuring what percentage of the proposed answers were also selected as an answer by a human.

Due to the ability of the classifier to take a lower number of candidate questions, we can see that it outperforms taking all named entities or all noun chunks by a sizable margin.

We further see that the average scores consistently drop with the increase of the number of answer candidates. This also explains the lower scores of the named entity and noun chunks approaches as they produce much longer lists of candidate answers.

Finally, we see in both tables, that the T5 model achieves the highest average result. However, in our setup it cannot produce multiple candidates. We plan to extend it accordingly in future work.

Figure 2 shows a passage from the development split of the SQuAD1.1 dataset and the top-10 answers that our model proposed for it. We can see that these answers represent a diverse set, including named entities, noun chunks, and individual words. Indeed, this is a typical example, as our analysis across the entire development dataset shows that on average, among the top-10 candidates, our model proposes 4.82 named entities and 6.40 noun chunks.

Note also that our evaluation setup could be unfair to the model in some cases, e.g., if the model proposes a good candidate answer but one that was not chosen by the human annotators, it would receive no credit for it.

Finally, note that our model can produce top-N results for user-defined values of N, which is an advantage over simple baselines based on entities or chunks, as well as over our setup for T5.

We proposed a new task: generate answer candidates that can serve as an input to answer-aware question generation models. We further created a dataset for this new task. Moreover, we proposed a suitable model for the task, which combines orthographic, lexical, syntactic, and semantic information, and can generate a pre-specified number of answers. Finally, we demonstrated improvements over simple approaches based on named entities, and competitiveness over complex, computationally expensive neural network models such as T5.

In future work, we plan to analyze and to improve the features. We also want to extend T5 to generate multiple candidates. We further plan to reduce the impact of false negatives, e.g., by means of manual evaluation by domain experts, and eventually by producing datasets with (potentially ranked) annotations of all suitable candidate answers.

This research is partially funded via Project UNITe by the OP “Science and Education for Smart Growth” and co-funded by the EU through the ESI Funds under GA No. BG05M2OP001-1.001-0004.