This paper reviews generalized Pareto copulas (GPC), which turn out to be a key to multivariate extreme value theory. Any GPC can be represented in an easy analytic way using a particular type of norm on R^d, called D-norm. The characteristic property of a GPC is its exceedance stability. GPC might help to end the debate: What is a multivariate generalized Pareto distribution? We present an easy way how to simulate data from an arbitrary GPC and, thus, from an arbitrary generalized Pareto distribution. As an application we derive nonparametric estimates of the probability that a random vector, which follows a GPC, exceeds a high threshold, together with confidence intervals. A case study on joint exceedance probabilities for air pollutants completes the paper. 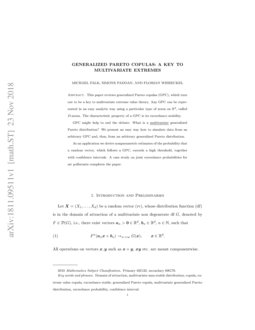 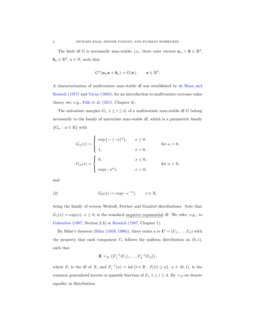 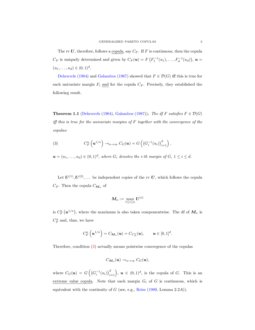 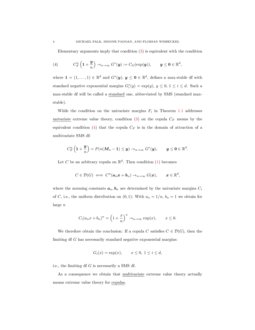 Calibration of the Pareto and related distributions -a reference-intrinsic approach

Threshold selection for wave heights: asymptotic methods based on L-moments

Let X=(X1,…,Xd) be a random vector (rv), whose distribution function (df) is in the domain of attraction of a multivariate non degenerate df G, denoted by F∈D(G), i.e., there exist vectors an>0∈Rd, bn∈Rd, n∈N, such that

All operations on vectors x,y such as x+y, xy etc. are meant componentwise.

A characterization of multivariate max-stable df was established by de Haan and Resnick (1977) and Vatan (1985); for an introduction to multivariate extreme value theory see, e.g., Falk et al. (2011, Chapter 4).

follows the uniform distribution on

, is the common generalized inverse or quantile function of

Fi, 1≤i≤d. By =D we denote equality in distribution.

Deheuvels (1984) and Galambos (1987) showed that F∈D(G) iff this is true for each univariate margin Fi and for the copula CF. Precisely, they established the following result.

The df F satisfies F∈D(G) iff this is true for the univariate margins of F together with the convergence of the copulas:

Let U(1),U(2),… be independent copies of the rv U, which follows the copula CF. Then the copula CMn of

is CnF(u1/n), where the maximum is also taken componentwise. The df of Mn is CnF and, thus, we have

Elementary arguments imply that condition (3) is equivalent with the condition

Let C be an arbitrary copula on Rd. Then condition (1) becomes

where the norming constants an,bn are determined by the univariate margins Ci of C, i.e., the uniform distribution on (0,1): With an=1/n, bn=1 we obtain for large n

We therefore obtain the conclusion: If a copula C satisfies C∈D(G), then the limiting df G has necessarily standard negative exponential margins:

i.e., the limiting df G is necessarily a SMS df.

This paper is organized as follows. In the next section we introduce D-norms, which turn out to be a common thread in multivariate extreme value theory. Using the concept of D-norms, we introduce in Section 3 generalized Pareto copulas (GPC). The characteristic property of a GPC is its excursion or exceedance stability, established in Theorem 4.1. The family of GPC together with the well-known set of univariate generalized Pareto distributions (GPD) enables the definition of multivariate GPD in Section 5. As the set of univariate GPD equals the set of univariate non degenerate exceedance stable distributions, its extension to higher dimensions via a GPC and GPD margins is an obvious idea. δ-neighborhoods of a GPC are introduced in Section 6. The normal copula is a prominent example. Among others we show how to simulate data, which follow a copula from such a δ-neighborhood. In Section 7 we show how our findings on GPC can be used to estimate exceedance probabilities above high thresholds, including confidence intervals. A case study in Section 8 on joint exceedance probabilities for air pollutants such as ozone, nitrogen dioxide, nitrogen oxide, sulphur dioxide and particulate matter, completes the paper.

Those norms, which can appear in the preceding result, can be characterized. Any norm ∥⋅∥ in equation (5) or (6) is necessarily of the following kind: There exists a rv Z=(Z1,…,Zd), whose components satisfy

Corollary 2.2 stimulates the following idea. Choose an arbitrary D-norm ∥⋅∥D on Rd and put with 1=(1,…,1)∈Rd

Each univariate margin Ci of C, defined this way, satisfies for u∈[0,1]

only for u close to 1∈Rd, i.e., for u∈[u0,1]⊂Rd with some 0<u0<1∈Rd. A copula C with this property will be called a generalized Pareto copula (GPC). These copulas were introduced in Aulbach et al. (2012); tests, whether data are generated by a copula in a δ-neighborhood of a GPC were derived in Aulbach et al. (2018), see Section 6 for the precise definition of this neighborhood. The multivariate generalized Pareto distributions defined in Section 5 show that GPC actually exist for any D-norm ∥⋅∥D. The corresponding construction of a generalized Pareto distributed rv also provides a way to simulate data from an arbitrary GPC.

As a consequence, an arbitrary copula C satisfies the following equivalences

It follows from Charpentier and Segers (2009, Theorem 4.1) that C is in its upper tail close to the GPC with corresponding logistic D-norm ∥⋅∥p.

This is readily seen as follows. Condition (8) is equivalent with the equation

4. Characterization of a GPC

Next we derive the characteristic property of a GPC. Suppose the rv U follows a GPC C. Then its survival function equals

is the dual D-norm function pertaining to ∥⋅∥D with generator Z=(Z1,…,Zd), see the proof of Theorem 4.1. Using the equations (4) below it is straightforward to prove that ≀≀⋅≀≀D does not depend on the particular choice of the generator Z of ∥⋅∥D. We have, for example,

Note that the mapping ∥⋅∥D↦≀≀⋅≀≀D is not one-to-one, i.e., two different D-norms can have identical dual D-norm functions.

The function ≀≀⋅≀≀D is obviously homogeneous:

As a consequence, a GPC is excursion stable:

The characteristic property of a GPC is its excursion stability, as formulated in the next result.

The implication “⇐” in the preceding result is just a reformulation of Falk and Guillou (2008, Proposition 6). The conclusion “⇒” can be seen as follows. We can assume without loss of generality that T={1,…,d}.

Using induction, it is easy to see that arbitrary numbers a1,…,ad∈R satisfy the equations

By choosing a1=⋯=ad=1, the preceding equations imply in particular

The inclusion-exclusion principle implies for v∈[0,1]d close to 0∈Rd

While the characteristic property of a GPC is its excursion stability, the characteristic property of an extreme value copula CG(u)=G(G−11(u1),…,G−1d(ud)), u∈(0,1)d, which corresponds to a max-stable df G, is its max-stability, defined below. By transforming the univariate margins to the standard negative distribution, we can assume without loss of generality that G is an SMS df. In this case we have G−1i(u)=log(u), u∈(0,1], and, thus, we obtain the representation of the copula of an arbitrary max-stable df

with some D-norm ∥⋅∥D. For a discussion of parametric families of extreme value copulas and their statistical analysis we refer to Genest and Nešlehová (2012).

If, on the other hand, an arbitrary copula C satisfies equation (13), then it is clearly the copula CG of a SMS df G. As a consequence, we have two stabilities of copulas: max-stability and exceedance stability.

Let C be an arbitrary copula on Rd. The considerations in this section show that the copula CCn of Cn converges point-wise to a max-stable copula if, and only if, C is in its upper tail close to that of an excursion stable copula, i.e., to that of a GPC.

The message of the considerations in this section is: If one wants to model the copula of multivariate exceedances above high thresholds, then a GPC is a first option.

Suppose the rv V follows the df Hα. Then

For a threshold s and an x>s, the univariate GPD takes the form of the following scale and shape family of distributions

The definition of a multivariate GPD is, however, not unique in the literature. There are different approaches (Rootzén and Tajvidi (2006), Falk et al. (2011)), each one trying to catch the excursion stability of a multivariate rv. The following suggestion might conclude this debate. Clearly, the excursion stability of a rv X should be satisfied by its margins and its copula. This is reflected in the following definition.

A rv X=(X1,…,Xd) follows a multivariate GPD, if each component Xi follows a univariate GPD (at least in its upper tail), and if the copula C corresponding to X is a GPC, i.e., there exists a D-norm ∥⋅∥D on Rd and u0∈[0,1)d such that

As a consequence, each such rv X, which follows a multivariate GPD, is exceedance stable and vice versa.

The following construction extends the bivariate approach proposed by Buishand et al. (2008) to arbitrary dimension. It provides a rv, which follows an arbitrary multivariate GPD as in Definition 5.1. Let Z=(Z1,…,Zd) be the generator of a D-norm ∥⋅∥D, with the additional property that each Zi≤c, for some c≥1. Note that such a generator exists for an arbitrary D-norm according to the normed generators theorem for D-norms (Falk (2019)). Let the rv U be uniformly on (0,1) distributed and independent of Z. Put

i.e., Vi follows in its upper tail a univariate standard Pareto distribution, and, by elementary computation, we have

The preceding equation implies that the copula of V is a GPC with corresponding D-norm ∥⋅∥D. The rv V can be seen as a prototype of a rv, which follows a multivariate GPD. This GPD is commonly called simple.

follows a general multivariate GPD with margins Hα1,…,Hαd in its univariate upper tails.

follows the standard exponential distribution on

Up to a possible location and scale shift, each rv X=(X1,…,Xd), which follows a multivariate GPD as defined in Definition 5.1, can in its upper tail be modeled by the rv Y=(Y1,…,Yd) in equation (5.2). This makes such rv Y in particular natural candidates for simulations of multivariate exceedances above high thresholds.

A major problem with the construction in (15) is the additional boundedness condition on the generator Z. This is, for example, not given in case of the logistic D-norm ∥⋅∥p with p∈(1,∞) or the Hüsler-Reiss D-norm. From the normed generators theorem in Falk (2019) we know that bounded generators exist, but, to the best of our knowledge, they are unknown in both cases.

In this section we drop this boundedness condition and show that the construction (15) provides a copula, which is in a particular neighborhood of a GPC, called δ-neighborhood. We are going to define this neighborhood next.

Then Ct is a univariate df on (−∞,0], and the copula C is obviously determined by the family

as s↑0. The copula C is by definition in the δ-neighborhood of the GPC CD with D-norm ∥⋅∥D if their upper tails are close to one another, precisely, if

Under additional differentiability conditions on Ct(s) with respect to s, also the reverse implication (???)⟹(???) holds; cf. Falk et al. (2011, Theorem 5.5.5). Therefore, the δ-neighborhood of a GPC, roughly, collects those copula with a polynomial rate of convergence for maxima.

Condition (6) can also be formulated in the following way:

With t=1, this is the fragility index, introduced by Geluk et al. (2007) to measure the stability of the stochastic system U1,…,Ud. The system is called stable if FI(1,u) is close to one, otherwise it is called fragile. The asymptotic distribution of Nu=∑di=11(Ui>1−tui), given Nu>0, was investigated in Falk and Tichy (2011); Falk and Tichy (2012).

If U follows a GPC with corresponding D-norm ∥⋅∥D, we obtain for u close enough to zero

implies that there is a least favorable direction r0∈R with

If U follows a copula, which is in a δ-neighborhood of a GPC with D-norm ∥⋅∥D, then we obtain the representation