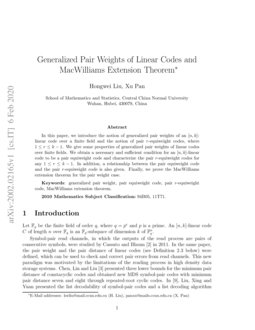 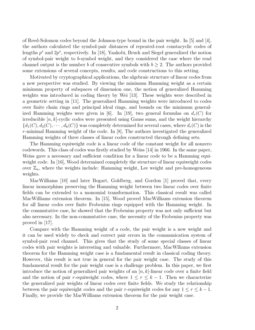 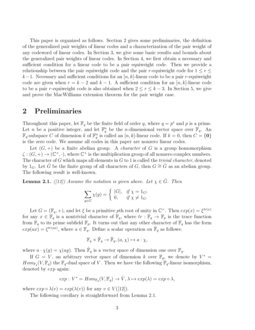 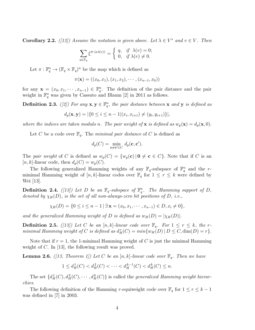 Let Fq be the finite field of order q, where q=pe and p is a prime. An [n,k]-linear code C of length n over Fq is an Fq-subspace of dimension k of Fnq.

Symbol-pair read channels, in which the outputs of the read process are pairs of consecutive symbols, were studied by Cassuto and Blaum [2] in 2011. In the same paper, the pair weight and the pair distance of linear codes (see Definition 2.3 below) were defined, which can be used to check and correct pair errors from read channels. This new paradigm was motivated by the limitations of the reading process in high density data storage systems. Chen, Lin and Liu [3] presented three lower bounds for the minimum pair distance of constacyclic codes and obtained new MDS symbol-pair codes with minimum pair distance seven and eight through repeated-root cyclic codes. In [9], Liu, Xing and Yuan presented the list decodability of symbol-pair codes and a list decoding algorithm of Reed-Solomon codes beyond the Johnson-type bound in the pair weight. In [5] and [4], the authors calculated the symbol-pair distances of repeated-root constacyclic codes of lengths ps and 2ps, respectively. In [18], Yaakobi, Bruck and Siegel generalized the notion of symbol-pair weight to b-symbol weight, and they considered the case where the read channel output is the number b of consecutive symbols with b≥2. The authors provided some extensions of several concepts, results, and code constructions to this setting.

MacWilliams [10] and later Bogart, Goldberg, and Gordon [1] proved that, every linear isomorphism preserving the Hamming weight between two linear codes over finite fields can be extended to a monomial transformation. This classical result was called MacWilliams extension theorem. In [15], Wood proved MacWilliams extension theorem for all linear codes over finite Frobenius rings equipped with the Hamming weight. In the commutative case, he showed that the Frobenius property was not only sufficient but also necessary. In the non-commutative case, the necessity of the Frobenius property was proved in [17].

Throughout this paper, let Fq be the finite field of order q, where q=pe and p is a prime. Let n be a positive integer, and let Fnq be the n

Fq. An Fq-subspace C of dimension k of Fnq is called an [n,k]-linear code. If k=0, then C={0} is the zero code. We assume all codes in this paper are nonzero linear codes.

Let G=(Fq,+), and let ξ be a primitive pth root of unity in C×. Then exp(x)=ξtr(x) for any x∈Fq is a nontrivial character of Fq, where tr:Fq→Fp is the trace function from Fq to its prime subfield Fp. It turns out that any other character of Fq has the form exp(ax)=ξtr(ax), where a∈Fq. Define a scalar operation on ^Fq as follows:

where a⋅χ(g)=χ(ag). Then ^Fq is a vector space of dimension one over Fq.

If G=V, an arbitrary vector space of dimension k over Fq, we denote by V∗=HomFq(V,Fq) the Fq-dual space of V. Then we have the following Fq-linear isomorphism, denoted by exp again:

The following corollary is straightforward from Lemma 2.1.

Let π:Fnq→(Fq×Fq)n be the map which is defined as

([2]) For any x,y∈Fnq, the pair distance between x and y is defined as

where the indices are taken modulo n. The pair weight of x is defined as wp(x)=dp(x,0).

Let C be a code over Fq. The minimal pair distance of C is defined as

The following generalized Hamming weights of any Fq-subspace of Fnq and the r-minimal Hamming weight of [n,k]-linear codes over Fq for 1≤r≤k were defined by Wei [13].

and the generalized Hamming weight of D is defined as wH(D)=|χH(D)|.

The set {d1H(C),d2H(C),⋯,dkH(C)} is called the generalized Hamming weight hierarchies.

The following definition of the Hamming r-equiweight code over Fq for 1≤r≤k−1 was defined in [7] in 2003.

The following theorem is called classical MacWilliams extension theorem, which was first proved by (MacWilliams [10]). Bogart, Goldberg, and Gordon provided an alternative proof in 1978 ([1]).

Let C and ~C be two [n,k]-linear codes over Fq. Then there exists an Fq-linear isomorphism f:C→~C which preserves Hamming weights if and only if there exists a monomial matrix M∈MOn(Fq) such that f(c)=cM for all c∈C.

Let D be an Fq-subspace of Fnq. The pair support of D, denoted by χp(D), is the set of non-always-zero pair-positions of π(D), i.e.,

Let U be an Fq-vector space of dimension k. We denote by ⟨V,W⟩ the subspace generated by the subspaces U,W of U, and let U/W denote the quotient space modulo W. For any 1≤r≤k, let

The function ˇmG:PG2(Fkq)→N is defined as follows. For any W∈PG2(Fkq),

And the function ˇmrG:PGr(Fkq)→N induced by ˇmG is defined to be

By the definitions of wp and mk−1G, we have

We first give a description on the relationship between the Hamming weight wH(D) and the pair weight wp(D) for any Fq-subspace D of Fnq. If wH(D)=n, then wp(D)=n. We have the following lemma.

Let D be an Fq-subspace of Fnq, and suppose wH(D)<n. Let ⋃Ll=1Bl be a minimal partition of the set χH(D) to subsets of consecutive indices (Indices may wrap modulo n) such that each subset Bl={sl,sl+1,⋯,sl+el} and L being the smallest integer that achieves such partition. Then wp(D)=wH(D)+L.

Let C be an [n,k]-linear code over Fq. Then we have

(a)   We first prove dk−1p(C)=dkp(C) implies dkH(C)=n. Suppose otherwise that dkH(C)<n. Then there exists an index i∈χH(C) such that i+1∉χH(C), where the indices are taken modulo n. Let

The proof of (b) is also straightforward from Theorem 3.3. ∎

Let C be an [n,k]-linear code over Fq. Then C is an MPDS code if and only if C is an MGPDS code.

It is trivial by using the inequality in the proof of Corollary 3.6. ∎