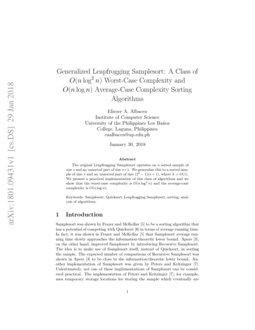 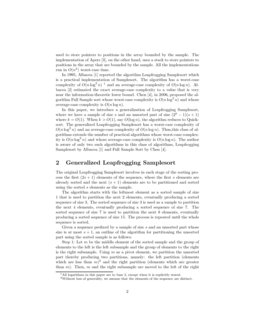 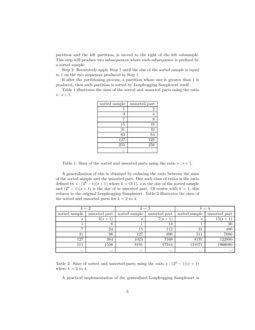 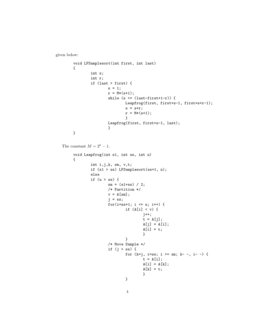 Smoothed analysis is a framework for analyzing the complexity of an algo...
Bichen Shi, et al. ∙

The two most prominent solutions for the sorting problem are Quicksort a...
Stefan Edelkamp, et al. ∙

Halting Time is Predictable for Large Models: A Universality Property and Average-case Analysis

On the Worst-Case Complexity of TimSort

We generalize the notion of minimax convergence rate. In contrast to the...
Alisa Kirichenko, et al. ∙

Samplesort was shown by Frazer and McKellar [5] to be a sorting algorithm that has a potential of competing with Quicksort [6] in terms of average running time. In fact, it was shown in Frazer and McKellar [5] that Samplesort average running time slowly approaches the information-theoretic lower bound. Apers [3], on the other hand, improved Samplesort by introducing Recursive Samplesort. The idea is to make use of Samplesort itself, instead of Quicksort, in sorting the sample. The expected number of comparisons of Recursive Samplesort was shown in Apers [3] to be close to the information-theoretic lower bound. Another implementation of Samplesort was given by Peters and Kritzinger [7]. Unfortunately, not one of these implementations of Samplesort can be considered practical. The implementation of Peters and Kritzinger [7], for example, uses temporary storage locations for storing the sample which eventually are used to store pointers to positions in the array bounded by the sample. The implementation of Apers [3], on the other hand, uses a stack to store pointers to positions in the array that are bounded by the sample. All the implementations run in O(n2) worst-case time.

Given a sequence prefixed by a sample of size s and an unsorted part whose size is at most s+1, an outline of the algorithm for partitioning the unsorted part using the sorted sample is as follows:

Step 1: Let m be the middle element of the sorted sample and the group of elements to the left is the left subsample and the group of elements to the right is the right subsample. Using m as a pivot element, we partition the unsorted part thereby producing two partitions, namely: the left partition (elements which are less than m)222Without loss of generality, we assume that the elements of the sequence are distinct. and the right partition (elements which are greater than m). Then, m and the right subsample are moved to the left of the right partition and the left partition, is moved to the right of the left subsample. This step will produce two subsequences where each subsequence is prefixed by a sorted sample.

Step 2: Recursively apply Step 1 until the size of the sorted sample is equal to 1 on the two sequences produced in Step 1.

If after the partitioning process, a partition whose size is greater than 1 is produced, then such partition is sorted by Leapfrogging Samplesort itself.

Table 1 illustrates the sizes of the sorted and unsorted parts using the ratio s:s+1.

A practical implementation of the generalized Leapfrogging Samplesort is given below:

The worst case is exhibited when the values of the sample are all less than or all greater than the unsorted elements every time the unsorted portion is partitioned using the elements of the sample. Without loss of generality, we assume n=s+(2k−1)(s+1). With this value of n, we obtain a worst-case complexity of:

we obtain the recurrence relation

When k=2, similarly, given

we obtain the recurrence relation

we produce the recurrence relation

Without loss of generality, we assume n=s+(2k−1)(s+1). The average-case complexity of the algorithm is given by the recurrence relation

will produce the recurrence relation