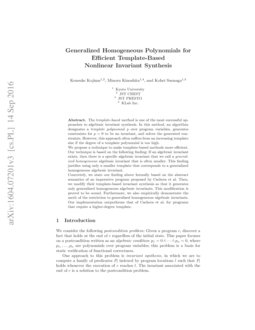 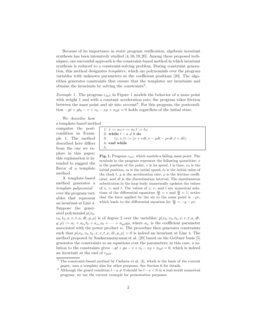 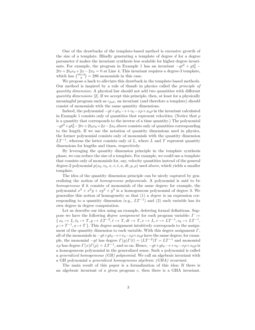 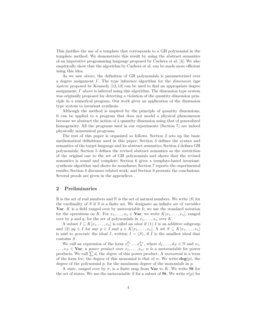 Templates and Recurrences: Better Together

This paper is the confluence of two streams of ideas in the literature o...
Jason Breck, et al. ∙

Algebra-based Synthesis of Loops and their Invariants (Invited Paper)

Provably correct software is one of the key challenges in our softwaredr...
Andreas Humenberger, et al. ∙

We present an algorithm for synthesizing program loops satisfying a give...
Andreas Humenberger, et al. ∙

Morgan and McIver's weakest pre-expectation framework is one of the most...
Jialu Bao, et al. ∙

We consider the following postcondition problem: Given a program c, discover a fact that holds at the end of c regardless of the initial state. This paper focuses on a postcondition written as an algebraic condition p1=0∧⋯∧pn=0, where p1,…,pn are polynomials over program variables; this problem is a basis for static verification of functional correctness.

One approach to this problem is invariant synthesis, in which we are to compute a family of predicates Pl indexed by program locations l such that Pl holds whenever the execution of c reaches l. The invariant associated with the end of c is a solution to the postcondition problem.

Because of its importance in static program verification, algebraic invariant synthesis has been intensively studied [20, 16, 19, 4]. Among these proposed techniques, one successful approach is the constraint-based method in which invariant synthesis is reduced to a constraint-solving problem. During constraint generation, this method designates templates, which are polynomials over the program variables with unknown parameters at the coefficient positions [20]. The algorithm generates constraints that ensure that the templates are invariants and obtains the invariants by solving the constraints111The constraint-based method by Cachera et al. [4], which is the basis of the current paper, uses a template also for other purposes. See Section 6 for details..

The program cfall in Figure 1 models the behavior of a mass point with weight 1 and with a constant acceleration rate; the program takes friction between the mass point and air into account222Although the guard condition t−a≠0 should be t−a<0 in a real-world numerical program, we use the current example for presentation purposes.. For this program, the postcondition −gt+gt0−v+v0−xρ+x0ρ=0 holds regardless of the initial state.

We describe how a template-based method computes the postcondition in Example 1. The method described here differs from the one we explore in this paper; this explanation is intended to suggest the flavor of a template method.

One of the drawbacks of the template-based method is excessive growth of the size of a template. Blindly generating a template of degree d for a degree parameter d makes the invariant synthesis less scalable for higher-degree invariants. For example, the program in Example 1 has an invariant −gt2+gt20−2tv+2t0v0+2x−2x0=0 at Line 4. This invariant requires a degree-3 template, which has (10+33)=286 monomials in this case.

We propose a hack to alleviate this drawback in the template-based methods. Our method is inspired by a rule of thumb in physics called the principle of quantity dimension: A physical law should not add two quantities with different quantity dimensions [2]. If we accept this principle, then, at least for a physically meaningful program such as cfall, an invariant (and therefore a template) should consist of monomials with the same quantity dimensions.

By leveraging the quantity dimension principle in the template synthesis phase, we can reduce the size of a template. For example, we could use a template that consists only of monomials for, say, velocity quantities instead of the general degree-2 polynomial p(x0,v0,x,v,t,a,dt,g,ρ) used above, which yields a smaller template.

The main result of this paper is a formalization of this idea: If there is an algebraic invariant of a given program c, then there is a GHA invariant. This justifies the use of a template that corresponds to a GH polynomial in the template method. We demonstrate this result by using the abstract semantics of an imperative programming language proposed by Cachera et al. [4]. We also empirically show that the algorithm by Cachera et al. can be made more efficient using this idea.

Although the method is inspired by the principle of quantity dimensions, it can be applied to a program that does not model a physical phenomenon because we abstract the notion of a quantity dimension using that of generalized homogeneity. All the programs used in our experiments (Section 7) are indeed physically nonsensical programs.

The rest of this paper is organized as follows. Section 2 sets up the basic mathematical definitions used in this paper; Section 3 defines the syntax and semantics of the target language and its abstract semantics; Section 4 defines GH polynomials; Section 5 defines the revised abstract semantics as the restriction of the original one to the set of GH polynomials and shows that the revised semantics is sound and complete; Section 6 gives a template-based invariant-synthesis algorithm and shows its soundness; Section 7 reports the experimental results; Section 8 discusses related work; and Section 9 presents the conclusions. Several proofs are given in the appendices .

R is the set of real numbers and N is the set of natural numbers. We write |S| for the cardinality of S if S is a finite set. We designate an infinite set of variables Var. K is a field ranged over by metavariable k; we use the standard notation for the operations on K. For x1,…,xn∈Var, we write K[x1,…,xn], ranged over by p and q, for the set of polynomials in x1,…,xn over K.

A state, ranged over by σ, is a finite map from Var to K. We write St for the set of states. We use the metavariable S for a subset of St. We write σ(p) for the evaluated value of p under σ. Concretely, σ(p):=p(σ(x1),…,σ(xn)). The set P(St) constitutes a complete lattice with respect to the set-inclusion order.

This section defines the target language, its concrete semantics, and its abstract semantics. We essentially follow the development by Cachera et al. [4]; we refer the interested reader to this paper.

The syntax of the target language is as follows:

where p is a polynomial over the program variables. We restrict the guard to a single-polynomial algebraic condition (i.e., p=0) or its negation.

The semantics of this language is given by the following denotation function, which is essentially the same as that by Cachera et al.

The abstract semantics is essentially the same as that given by Cachera et al. [4] with a small adjustment. The preorder ⊑♯⊆P(K[x1,…,xn])×P(K[x1,…,xn]) is defined by S1⊑♯S2:⟺S2⊆S1333The original abstract semantics of Cachera et al. [4] is defined as a transformer on ideals of polynomials; however, we formulate it here so that it operates on sets of polynomials because their invariant-synthesis algorithm depends on the choice of a generator of an ideal.. Then P(K[x1,…,xn]) is a complete lattice, and the meet is given as the set unions: Given H∈P(K[x1,…,xn]) and U⊆P(K[x1,…,xn]), H⊑♯G for all G∈U if and only if H⊑♯⋃U.

The definition of the abstract semantics is parameterized over a remainder-like operation Rem(f,p) that satisfies Rem(f,p)=f−qp for some q; we allow any Rem that satisfies this condition to be used. Note that this differs from the standard remainder operation where we require LM⪯(p) — the greatest monomial in p with respect to a monomial order ⪯ — not to divide any monomial in LM⪯(Rem(f,p)). We write Rem(G,p), where G is a set of polynomials, for the set \setRem(f,p)f∈G∖\set0.

The abstract semantics ⟦c⟧♯Rem is defined as follows.

In this definition, G[x:=p]=\setq[x:=p]q∈G and q[x:=p] is the polynomial obtained by replacing x with p in q. νF exists for an arbitrary monotone F because we are working in the complete lattice P(K[x1,…,xn]); concretely, we have νF=⋃\setGG⊑♯F(G).

⟦c⟧♯Rem transfers backward a set of polynomials whose values are 0. Cachera et al. [4, Theorem 3] showed the soundness of this abstract semantics: For any program c and a set of polynomials G, we have γ(⟦c⟧♯Rem(G))⊆⟦c⟧(γ(G)). Although our abstract values are sets rather than ideals, we can prove this theorem in the same way (i.e., induction on the structure of c) as the original proof.

The abstract semantics is related to the postcondition problem as follows:

From the soundness above, γ(⟦c⟧♯Rem(G))=γ(\set0)=St⊆⟦c⟧(γ(G)); therefore ⟦c⟧(γ(G))=St follows because St is the top element in the concrete domain.

By Theorem 3.1, a set of polynomials G such that ⟦c⟧♯Rem(G)=\set0 for some Rem constitutes a solution of the postcondition problem. The choice of Rem indeed matters in solving the postcondition problem: There are c and G such that ⟦c⟧♯Rem(G)=\set0 holds for some Rem but not for others. The reader is referred to [4, Section 4.1] for a concrete example.

A polynomial p is said to be a homogeneous polynomial of degree d if the degree of every monomial in p is d [5]. As we mentioned in Section 1, we generalize this notion of homogeneity.

We first generalize the notion of the degree of a polynomial.

For example, set Γ to \sett↦T,v↦LT−1; then gdegΓ(2vt)=L. In terms of the analogy with quantity dimensions, this means that the expression 2vt represents a length.

It is easy to see that any p∈K[x1,…,xn] can be uniquely written as the finite sum of GH polynomials as pΓ,τ1+⋯+pΓ,τm, where pΓ,τi is the summand of g-degree τi under Γ in this representation. For example, the polynomial p in Example 2, can be written as pL+pLT−1 where pL=p1 and pLT−1=p2 from the previous example. We call pΓ,τ the homogeneous component of p with g-degree τ under Γ, or simply a homogeneous component of p; we often omit Γ part if it is clear from the context.

The definitions above are parameterized over a g-degree assignment Γ. It is determined from the usage of variables in a given program, which is captured by the following type judgment.

The judgment Γ⊢c is the smallest relation that satisfies the rules in Figure 2. We say Γ is consistent with the program c if Γ⊢c holds.

The consistency relation above is an adaptation of the dimension type system proposed by Kennedy [12, 13] to our imperative language. A g-degree assignment Γ such that Γ⊢c holds makes every polynomial in c a GH one. In the rule T-Assign, we require the polynomial p to have the same g-degree as that of x in Γ.

4.2 Automated inference of the g-degree assignment

Kennedy also proposed a constraint-based automated type inference algorithm of his type system [12, 13]. We adapt his algorithm so that, given a command c, it infers a g-degree assignment Γ such that Γ⊢c. The algorithm is in three steps: (1) designating a template of the g-degree assignment, (2) generating constraints over g-degrees, and (3) solving the constraints. In order to make the current paper self-contained, we explain each step below.

Step 1: Designating a template of the g-degree assignment

Let Sc:=\setx1,…,xn be the set of the variables occurring in the given program c. Then, the algorithm first designates a template g-degree assignment Γc:=\setx1↦αx1,…,xn↦αxn where αx1,…,αxn are fresh unknowns taken from the set GDegV for the g-degrees of x1,…,xn. For example, given the program cfall in Figure 1, the algorithm designates

where αg,αt,αdt,αv,αx,αx0,αv0,αρ,αa are distinct unknowns for the g-degrees of the variables that are to be inferred.

The algorithm then generates the constraints over the g-degrees. We first define the set of constraints. Let GDeg′ be GDeg\setα1,…,αn in the rest of this section, where α1,…,αn are the unknowns generated in the previous step. (Recall that GDegS is the set of g-degrees generated by S. Therefore, GDeg′ is the set of products of the form αk11…αknn for k1,…,kn∈Z.) The Γc generated in the previous step can be seen as a map from Var to GDeg′.

A g-degree constraint is an equation τ1=τ2 where τ1,τ2∈GDeg′. We use a metavariable σ for maps from \setα1,…,αn to GDegB. This map can be naturally extended to take the elements of GDeg′. We say that σ is a solution of a constraint set C if it satisfies all the equations in C. For example, the map σ:=\setαv↦LT−1,αx↦L,αt↦T is a solution of the constraint set \setαv=αxα−1t since σ(αv)=LT−1=σ(αxα−1t)=σ(αx)σ(αt)−1.