Spectrum sensing is a fundamental problem in cognitive radio. We propose a function of covariance matrix based detection algorithm for spectrum sensing in cognitive radio network. Monotonically increasing property of function of matrix involving trace operation is utilized as the cornerstone for this algorithm. The advantage of proposed algorithm is it works under extremely low signal-to-noise ratio, like lower than -30 dB with limited sample data. Theoretical analysis of threshold setting for the algorithm is discussed. A performance comparison between the proposed algorithm and other state-of-the-art methods is provided, by the simulation on captured digital television (DTV) signal. 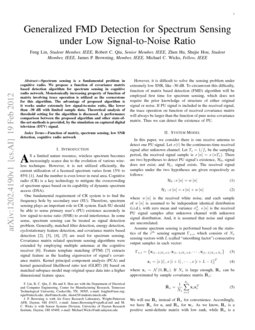 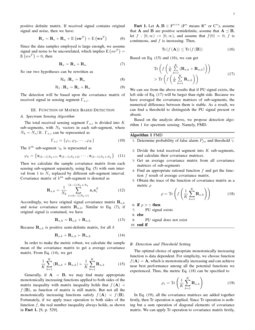 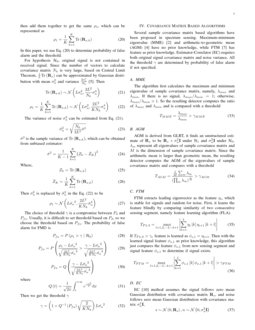 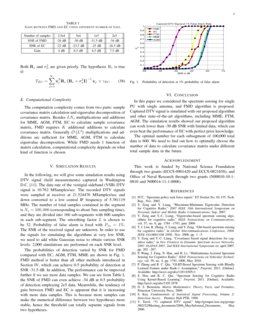 As a limited nature resource, wireless spectrum becomes increasingly scarce due to the evolution of various wireless technique. However, it is not utilized efficiently, the current utilization of a licensed spectrum varies from 15% to 85% [1]. And the number is even lower in rural area. Cognitive radio (CR) is a key technology to mitigate the overcrowding of spectrum space based on its capability of dynamic spectrum access (DSA).

However, it is difficult to solve the sensing problem under extremely low SNR, like -30 dB. To circumvent this difficulty, function of matrix based detection (FMD) algorithm will be employed first time for spectrum sensing, which does not require the prior knowledge of structure of either original signal or noise. If PU signal is included in the received signal, the trace operation on function of received covariance matrix will always be larger than the function of pure noise covariance matrix. Thus we can detect the existence of PU.

is the received white noise, and each sample of

is assumed to be independent identical distribution (i.i.d.), with zero mean and variance

σ2n. s[n] is the received PU signal samples after unknown channel with unknown signal distribution. And, it is assumed that noise and signal are uncorrelated.

Assume spectrum sensing is performed based on the statistics of the ith sensing segment Γx,i, which consists of Ns

where xi∼N(0,Rx). If Ns is large enough, Rx can be approximated by sample covariance matrix ^Rx:

We will use Rx instead of ^Rx for convenience. Accordingly, we have Rs for si and Rn for wi. As we know, Rs is a positive semi-definite matrix with low rank, while Rn is a positive definite matrix. If received signal contains original signal and noise, then we have:

Since the data samples employed is large enough, we assume signal and noise to be uncorrelated, which implies E(swT)=E(wsT)=0, then

So our two hypotheses can be rewritten as

The detection will be based upon the covariance matrix of received signal in sensing segment Γx,i.

Iii Function of Matrix Based Detection

The total received sensing segment Γx,i is divided into K sub-segments, with Nk vectors in each sub-segment, where Nk=Ns/K. Γx,i can be represented as

The kth sub-segment γk is represented as

Because Rs,k is positive semi-definite matrix, for all k

Generally, if A≺B, we may find many appropriate monotonically increasing functions applied to both sides of the matrix inequality with matrix inequality holds that f(A)≺f(B), as function of matrix is still matrix. But not all the monotonically increasing functions satisfy f(A)≺f(B). Fortunately, if we apply trace operation to both sides of the function f, the real number inequality always holds, as shown in Fact 1. [9, p. 529].

We can see from the above results that if PU signal exists, the left side of Eq. (17) will be larger than right side. Because we have averaged the covariance matrices of sub-segments, the numerical difference between them is stable. As a result, we can find a threshold to distinguish the PU signal present or absent.

Based on the analysis above, we propose detection algorithm 1 for spectrum sensing. Namely, FMD.

In this paper, we use Eq. (20) to determine probability of false alarm and the threshold.

For hypothesis H0, original signal is not contained in received signal. Since the number of vectors to calculate covariance matrix Nk

is very large, based on Central Limit Theorem,

can be approximated by Gaussian distribution with mean

The variance of noise σ2n

can be estimated from Eq. (

^σ2 is the sample variance of Tr(Rx,k)

, which can be obtained from unbiased estimator:

Then we get the threshold γ

[4] have no prior knowledge, while FTM [7] has feature as prior knowledge. Estimator-Correlator (EC) requires both original signal covariance matrix and noise variance. All the threshold γ are determined by probability of false alarm if not specified.

The algorithm first calculates the maximum and minimum eigenvalue of sample covariance matrix, namely, λmax and λmin. If there is no signal, λmax/λmin=1; otherwise, λmax/λmin>1. So the resulting detector computes the ratio of λmax and λmin and is compared with a threshold

FTM extracts leading eigenvector as the feature ηi, which is stable for signals and random for noise. First, it learns the feature blindly by comparing similarity of two consecutive sensing segment, namely feature learning algorithm (FLA).

Both Rs and σ2n are given priorly. The hypothesis H1 is true if:

In the following, we will give some simulation results using DTV signal (field measurements) captured in Washington D.C. [11]. The data rate of the vestigial sideband (VSB) DTV signal is 10.762 MSamples/sec. The recorded DTV signals were sampled at receiver at 21.524476 MSamples/sec and down converted to a low central IF frequency of 5.381119 MHz. The number of total samples contained in the segment is Ns=100,000 (corresponding to about 5ms sampling time), and they are divided into 166 sub-segments with 600 samples in each sub-segment. The smoothing factor L is chosen to be 32. Probability of false alarm is fixed with Pfa=1%. The SNR of the received signal are unknown. In order to use the signals for simulating the algorithms at very low SNR, we need to add white Gaussian noise to obtain various SNR levels. 2,000 simulations are performed on each SNR level.

The probabilities of detection varied by SNR for FMD compared with EC, AGM, FTM, MME are shown in Fig. 1. FMD method is better than all other methods introduced in Section IV, which can achieve 0.5 probability of detection at SNR -31.5 dB. In addition, The performance can be improved further if we use more data samples. We can see from Table I, the SNR of FMD can even achieve -34 dB at 0.5 probability of detection employing 2e5 data. Meanwhile, the tendency of gain between FMD and EC is apparent that it is increasing with more data samples. This is because more samples can make the numerical difference between two hypotheses more stable, hence the threshold can totally separate signals from two hypotheses.

In this paper we considered the spectrum sensing for single PU with single antenna, and FMD algorithm is proposed. Captured DTV signal is simulated with our proposed algorithm and other state-of-the-art algorithms, including MME, FTM, AGM. The simulation results showed our proposed algorithm can work lower than -30 dB SNR with limited data, which can even beat the performance of EC with perfect prior knowledge.

The optimal number for each subsegment of 100,000 total data is 600. We need to find out how to optimally choose the number of data to calculate covariance matrix under different total sample data in the future.