In this paper, we propose a new loss function called generalized end-to-end (GE2E) loss, which makes the training of speaker verification models more efficient than our previous tuple-based end-to-end (TE2E) loss function. Unlike TE2E, the GE2E loss function updates the network in a way that emphasizes examples that are difficult to verify at each step of the training process. Additionally, the GE2E loss does not require an initial stage of example selection. With these properties, the model with new loss function learns a better model, by decreasing EER by more than 10 reducing the training time by >60 technique, which allow us do domain adaptation - training more accurate model that supports multiple keywords (i.e. "OK Google" and "Hey Google") as well as multiple dialects. 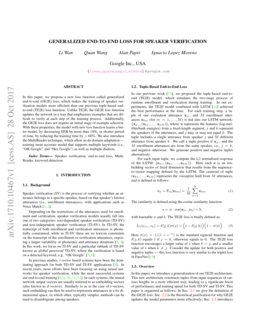 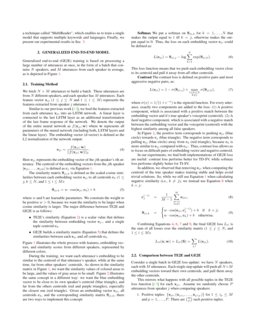 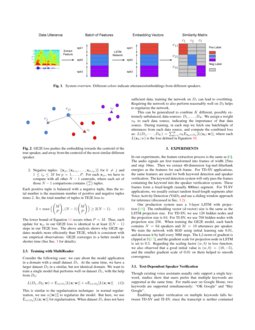 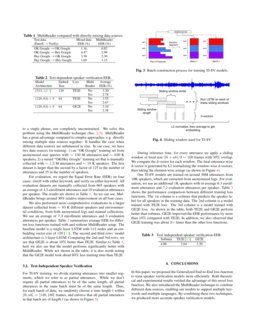 Speaker verification (SV) is the process of verifying whether an utterance belongs to a specific speaker, based on that speaker’s known utterances (i.e., enrollment utterances), with applications such as Voice Match [1, 2].

[3, 4]. In this work, we focus on TI-SV and a particular subtask of TD-SV known as global password TD-SV, where the verification is based on a detected keyword, e.g. “OK Google” [5, 6]

In previous studies, i-vector based systems have been the dominating approach for both TD-SV and TI-SV applications [7]

. In recent years, more efforts have been focusing on using neural networks for speaker verification, while the most successful systems use end-to-end training

. In such systems, the neural network output vectors are usually referred to as embedding vectors (also known as

d-vectors). Similarly to as in the case of i-vectors, such embedding can then be used to represent utterances in a fix dimensional space, in which other, typically simpler, methods can be used to disambiguate among speakers.

In our previous work [13], we proposed the tuple-based end-to-end (TE2E) model, which simulates the two-stage process of runtime enrollment and verification during training. In our experiments, the TE2E model combined with LSTM [14] achieved the best performance at the time. For each training step, a tuple of one evaluation utterance xj∼ and M enrollment utterances xkm (for m=1,…,M) is fed into our LSTM network: {xj∼,(xk1,…,xkM)}, where x represents the features (log-mel-filterbank energies) from a fixed-length segment, j and k represent the speakers of the utterances, and j may or may not equal k. The tuple includes a single utterance from speaker j and M different utterance from speaker k. We call a tuple positive if xj∼ and the M enrollment utterances are from the same speaker, i.e., j=k, and negative otherwise. We generate positive and negative tuples alternatively.

For each input tuple, we compute the L2 normalized response of the LSTM: {ej∼,(ek1,…,ekM)}. Here each e is an embedding vector of fixed dimension that results from the sequence-to-vector mapping defined by the LSTM. The centroid of tuple (ek1,…,ekM) represents the voiceprint built from M utterances, and is defined as follows:

with learnable w and b. The TE2E loss is finally defined as:

is the standard sigmoid function and

In this paper, we introduce a generalization of our TE2E architecture. This new architecture constructs tuples from input sequences of various lengths in a more efficient way, leading to a significant boost of performance and training speed for both TD-SV and TI-SV. This paper is organized as follows: In Sec. 2.1 we give the definition of the GE2E loss; Sec. 2.2 is the theoretical justification for why GE2E updates the model parameters more effectively; Sec. 2.3 introduces a technique called “MultiReader”, which enables us to train a single model that supports multiple keywords and languages; Finally, we present our experimental results in Sec. 3.

Generalized end-to-end (GE2E) training is based on processing a large number of utterances at once, in the form of a batch that contains N speakers, and M utterances from each speaker in average, as is depicted in Figure 1.

We fetch N×M utterances to build a batch. These utterances are from N different speakers, and each speaker has M utterances. Each feature vector xji (1≤j≤N and 1≤i≤M

) represents the features extracted from speaker

Similar to our previous work [13], we feed the features extracted from each utterance xji into an LSTM network. A linear layer is connected to the last LSTM layer as an additional transformation of the last frame response of the network. We denote the output of the entire neural network as f(xji;w) where w represents all parameters of the neural network (including both, LSTM layers and the linear layer). The embedding vector (d-vector) is defined as the L2 normalization of the network output:

The similarity matrix Sji,k is defined as the scaled cosine similarities between each embedding vector eji to all centroids ck (1≤j,k≤N, and 1≤i≤M):

where w and b are learnable parameters. We constrain the weight to be positive w>0, because we want the similarity to be larger when cosine similarity is larger. The major difference between TE2E and GE2E is as follows:

During the training, we want the embedding of each utterance to be similar to the centroid of all that speaker’s embeddings, while at the same time, far from other speakers’ centroids. As shown in the similarity matrix in Figure 1, we want the similarity values of colored areas to be large, and the values of gray areas to be small. Figure 2 illustrates the same concept in a different way: we want the blue embedding vector to be close to its own speaker’s centroid (blue triangle), and far from the others centroids (red and purple triangles), especially the closest one (red triangle). Given an embedding vector eji, all centroids ck, and the corresponding similarity matrix Sji,k, there are two ways to implement this concept:

This loss function means that we push each embedding vector close to its centroid and pull it away from all other centroids.

Contrast The contrast loss is defined on positive pairs and most aggressive negative pairs, as:

In addition, we observed that removing eji when computing the centroid of the true speaker makes training stable and helps avoid trivial solutions. So, while we still use Equation 1 when calculating negative similarity (i.e., k≠j), we instead use Equation 8 when k=j:

Consider a single batch in GE2E loss update: we have N speakers, each with M utterances. Each single step update will push all N×M embedding vectors toward their own centroids, and pull them away the other centroids.

This mirrors what happens with all possible tuples in the TE2E loss function [13] for each xji. Assume we randomly choose P utterances from speaker j when comparing speakers:

The lower bound of Equation 11 occurs when P=M. Thus, each update for xji in our GE2E loss is identical to at least 2(N−1) steps in our TE2E loss. The above analysis shows why GE2E updates models more efficiently than TE2E, which is consistent with our empirical observations: GE2E converges to a better model in shorter time (See Sec. 3 for details).

Consider the following case: we care about the model application in a domain with a small dataset D1. At the same time, we have a larger dataset D2 in a similar, but not identical domain. We want to train a single model that performs well on dataset D1, with the help from D2:

This can be generalized to combine K different, possibly extremely unbalanced, data sources: D1,…,DK. We assign a weight αk to each data source, indicating the importance of that data source. During training, in each step we fetch one batch/tuple of utterances from each data source, and compute the combined loss as: L(D1,⋯,DK)=∑Kk=1αkExk∈Dk[L(xk;w)], where each L(xk;w) is the loss defined in Equation 10.

In our experiments, the feature extraction process is the same as [6]. The audio signals are first transformed into frames of width 25ms and step 10ms. Then we extract 40-dimension log-mel-filterbank energies as the features for each frame. For TD-SV applications, the same features are used for both keyword detection and speaker verification. The keyword detection system will only pass the frames containing the keyword into the speaker verification system. These frames form a fixed-length (usually 800ms) segment. For TI-SV applications, we usually extract random fixed-length segments after Voice Activity Detection (VAD), and use a sliding window approach for inference (discussed in Sec. 3.2) .

Our production system uses a 3-layer LSTM with projection [16]. The embedding vector (d-vector) size is the same as the LSTM projection size. For TD-SV, we use 128 hidden nodes and the projection size is 64. For TI-SV, we use 768 hidden nodes with projection size 256. When training the GE2E model, each batch contains N=64 speakers and M=10 utterances per speaker. We train the network with SGD using initial learning rate 0.01, and decrease it by half every 30M steps. The L2-norm of gradient is clipped at 3 [17], and the gradient scale for projection node in LSTM is set to 0.5. Regarding the scaling factor (w,b) in loss function, we also observed that a good initial value is (w,b)=(10,−5), and the smaller gradient scale of 0.01 on them helped to smooth convergence.

Enabling speaker verification on multiple keywords falls between TD-SV and TI-SV, since the transcript is neither constrained to a single phrase, nor completely unconstrained. We solve this problem using the MultiReader technique (Sec. 2.3). MultiReader has a great advantage compared to simpler approaches, e.g. directly mixing multiple data sources together: It handles the case when different data sources are unbalanced in size. In our case, we have two data sources for training: 1) An “OK Google” training set from anonymized user queries with ∼150 M utterances and ∼630 K speakers; 2) A mixed “OK/Hey Google” training set that is manually collected with ∼1.2 M utterances and ∼18 K speakers. The first dataset is larger than the second by a factor of 125 in the number of utterances and 35 in the number of speakers.

For evaluation, we report the Equal Error Rate (EER) on four cases: enroll with either keyword, and verify on either keyword. All evaluation datasets are manually collected from 665 speakers with an average of 4.5 enrollment utterances and 10 evaluation utterances per speaker. The results are shown in Table 1. As we can see, MultiReader brings around 30% relative improvement on all four cases.

We also performed more comprehensive evaluations in a larger dataset collected from ∼83 K different speakers and environmental conditions, from both anonymized logs and manual collections. We use an average of 7.3 enrollment utterances and 5 evaluation utterances per speaker. Table 2 summarizes average EER for different loss functions trained with and without MultiReader setup. The baseline model is a single layer LSTM with 512 nodes and an embedding vector size of 128 [13]. The second and third rows’ model architecture is 3-layer LSTM. Comparing the 2nd and 3rd rows, we see that GE2E is about 10% better than TE2E. Similar to Table 1, here we also see that the model performs significantly better with MultiReader. While not shown in the table, it is also worth noting that the GE2E model took about 60% less training time than TE2E.

During inference time, for every utterance we apply a sliding window of fixed size (lb+ub)/2=160 frames with 50% overlap. We compute the d-vector for each window. The final utterance-wise d-vector is generated by L2 normalizing the window-wise d-vectors, then taking the element-wise averge (as shown in Figure 4).

Our TI-SV models are trained on around 36M utterances from 18K speakers, which are extracted from anonymized logs. For evaluation, we use an additional 1000 speakers with in average 6.3 enrollment utterances and 7.2 evaluation utterances per speaker. Table 3 shows the performance comparison between different training loss functions. The first column is a softmax that predicts the speaker label for all speakers in the training data. The second column is a model trained with TE2E loss. The third column is a model trained with GE2E loss. As shown in the table, GE2E performs better than both softmax and TE2E. The EER performance improvement is larger than 10%. In addition, we also observed that GE2E training was about 3× faster than the other loss functions.