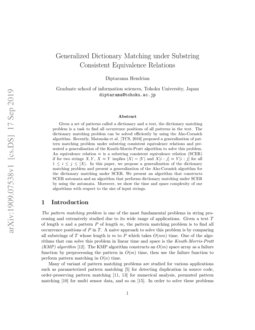 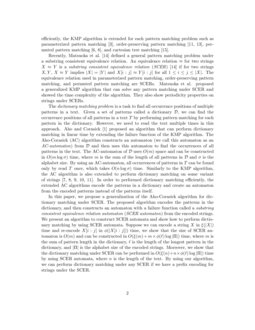 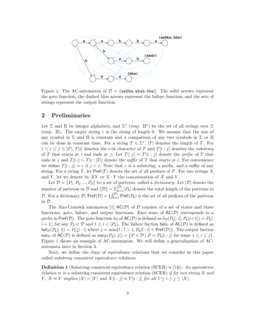 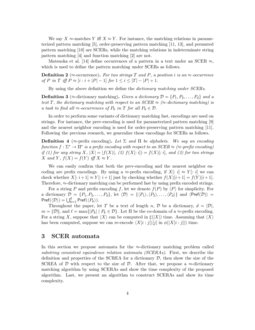 In the k-mismatch problem we are given a pattern of length m and a text ...
Paweł Gawrychowski, et al. ∙

Covers are a kind of quasiperiodicity in strings. A string C is a cover ...
Natsumi Kikuchi, et al. ∙

In this paper, we study the properties of the Frank-Wolfe algorithm to s...
Farah Cherfaoui, et al. ∙

The pattern matching problem is one of the most fundamental problems in string processing and extensively studied due to its wide range of applications. Given a text T of length n and a pattern P of length m, the pattern matching problem is to find all occurrence positions of P in T. A naive approach to solve this problem is by comparing all substrings of T whose length is m to P which takes O(nm) time. One of the algorithms that can solve this problem in linear time and space is the Knuth-Morris-Pratt (KMP) algorithm [12]. The KMP algorithm constructs an O(m) space array as a failure function by preprocessing the pattern in O(m) time, then use the failure function to perform pattern matching in O(n) time.

Let Σ and Π be integer alphabets, and Σ∗ (resp. Π∗) be the set of all strings over Σ (resp. Π). The empty string ε is the string of length 0. We assume that the size of any symbol in Σ and Π is constant and a comparison of any two symbols in Σ or Π can be done in constant time. For a string T∈Σ∗, |T| denotes the length of T. For 1≤i≤j≤|T|, T[i] denotes the i-th character of T and T[i:j] denotes the substring of T that starts at i and ends at j. Let T[:j]=T[1:j] denote the prefix of T that ends at j and T[i:]=T[i:|T|] denote the suffix of T that starts at i. For convenience we define T[i:j]=ε if j<i. Note that ε is a substring, a prefix, and a suffix of any string. For a string T, let Pref(T) denote the set of all prefixes of P. For two strings X and Y, let we denote by XY or X⋅Y the concatenation of X and Y.

Matsuoka et al. [14] define occurrences of a pattern in a text under an SCER ≈, which is used to define the pattern matching under SCERs as follows.

By using the above definition we define the dictionary matching under SCERs.

We can easily confirm that both the prev-encoding and the nearest neighbor encoding are prefix encodings. By using a ≈-prefix encoding, if X[:i]≈Y[:i] we can check whether X[:i+1]≈Y[:i+1] just by checking whether f(X)[i+1]=f(Y)[i+1]. Therefore, ≈-dictionary matching can be performed fast by using prefix encoded strings.

In this section we propose automata for the ≈-dictionary matching problem called substring consistent equivalence relation automata (SCERAs). First, we describe the definition and properties of the SCREA for a dictionary D, then show the size of the SCREA of D with respect to the size of D. After that, we propose a ≈-dictionary matching algorithm by using SCERAs and show the time complexity of the proposed algorithm. Last, we present an algorithm to construct SCERAs and show its time complexity.

For a dictionary D={P1,P2,…,Pd}, the substring consistent equivalence relation automaton SCERA(D) of D consists of a set of states and three functions, namely goto, failure, and output functions.

The set of states SD of SCERA(D) defined as follows.

Next, we define the functions in SCERA(D). First, the goto function δD of SCERA(D) is defined as follows.

Next, the failure fuction failD of SCERA(D) is defined as follows.

The failure function has the following properties.

Straightforward by the definition. ∎∎

Last, the output function outD of SCERA(D) is defined as follows.

The output function has the following properties.

Assume there is a pattern P such that P∈outD(failD(S)) but P∉outD(S). By Lemma 4, there exists q such that ⟨P⟩=failqD(failD(S)). Since failqD((failD(S))=failq+1D(S), we have P∈outD(S) which contradicts the assumption.

Next, assume there is a pattern P such that P∈outD(S) but P∉outD(failD(S)). By Lemma 4, there is q such that ⟨P⟩=failqD(S). If q>0, ⟨P⟩=failq−1D(fail(S)) implies P∈outD(failD(S)) which contradicts the assumption. Therefore, the remaining possibility is q=0 which implies S=⟨P⟩∈⟨D⟩. ∎∎

Lemma 5 implies that we can compute outD(S) by copying outD(failD(S)) and adding S if S∈D. We will utilize Lemma 5 to construct the output function efficiently.

Assume that the size of any symbol in Π is constant. The goto function δD of SCERA(D) can be implemented in O(m) space.

Next, the failure function can be implemented by using a state pointer on each state.

For a dictionary D, failD can be implemented in O(m) space.

Last, similarly to the original AC-automata, the output function outD can be implemented in linear space by using a list.

For a dictionary D, outD can be implemented in O(m) space.

Each state S stores a pair (i,p), where i is the pattern number if S∈⟨D⟩ or NULL otherwise and p is a pointer to a state S′=failqD(⟨Pk⟩[:j]) for the smallest q>0 such that S′∈⟨D⟩ if exist or NULL otherwise. Since |S| is O(m) by Lemma 1, outD can be implemented in O(m) space. ∎∎

Assume that the size of any symbol in Π is constant. For a dictionary D={P1,P2,…,Pd} of total size ∥D∥=m, SCERA(D) can be implemented in O(m) space.

In this section, we describe how to use SCER automata for dictionary matching. LABEL:alg:match shows a dictionary matching algorithm by using SCERA(D). In order to simplify the algorithm we use an auxiliary state ⊥ where δ(⊥,c)=root for any c∈Π and fail(root)=⊥. For any state S, let dep(S) be the depth of S i.e. the length of the shortest path from root to S.

In this section, we describe an algorithm to construct SCERA(D). We divide the algorithm into three parts: goto function, failure function, and output function construction algorithms.

By assumption, the dictionary can be encoded in ξ(m) time. The operations in the inner loop are computed O(m) times. δ(v,c) for any c∈Π can be computed in O(log(|Π|)) by binary search. ∎∎

The dictionary can be encoded in ξ(m) time. The running time of LABEL:alg:failure is bounded by the number of executions of fail. Let xk,j be the number of executions of fail when finding fail(⟨Pk[:j]⟩). Since xk,j≤dep(fail(⟨Pk[:j−1]⟩))−dep(fail(⟨Pk[:j]⟩))+2, we can compute Σdk=1Σ|Pk|j=1xk,j≤Σdk=1|Pk|=m. The goto function δ is executed each time fail be executed. Since we need to re-encode a substring each time δ be executed and δ can be executed in O(log|Π|) time, the algorithm takes O(ξ(m)+m×ϕ(ℓ)log|Π|) time in total. ∎∎

The dictionary can be encoded in ξ(m) time. Clearly the loops are executed O(|S|) times in total. The goto function can be executed in O(log(|Π|)) time. Therefore, LABEL:alg:output runs in O(ξ(m)+m×log(|Π|)) time. ∎∎

In this paper, we presented a generalization of dictionary matching problem under SCERs. We proposed a generalization of the Aho-Corasick algorithm for the dictionary matching problem under SCERs. We encoded the patterns by using a ≈-prefix encoding, and then construct an SCER automaton from the encoded strings.

We believe there exists a ≈-prefix encoding for any SCER ≈, so that our algorithm can be used for any ≈-dictionary matching. The proof remains as an open problem.