The relative α-entropy is the Rényi analog of relative entropy and arises prominently in information-theoretic problems. Recent information geometric investigations on this quantity have enabled the generalization of the Cramér-Rao inequality, which provides a lower bound for the variance of an estimator of an escort of the underlying parametric probability distribution. However, this framework remains unexamined in the Bayesian framework. In this paper, we propose a general Riemannian metric based on relative α-entropy to obtain a generalized Bayesian Cramér-Rao inequality. This establishes a lower bound for the variance of an unbiased estimator for the α-escort distribution starting from an unbiased estimator for the underlying distribution. We show that in the limiting case when the entropy order approaches unity, this framework reduces to the conventional Bayesian Cramér-Rao inequality. Further, in the absence of priors, the same framework yields the deterministic Cramér-Rao inequality. 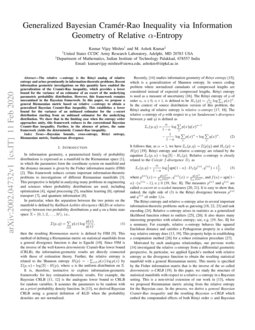 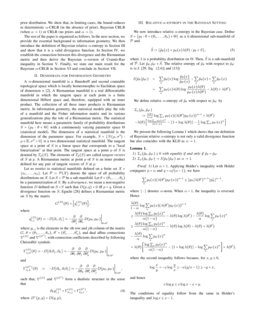 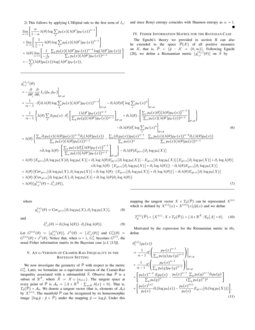 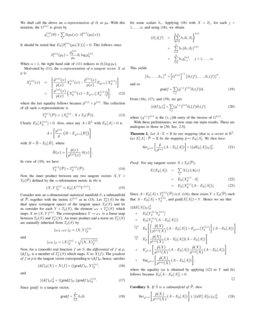 In information geometry, a parameterized family of probability distributions is expressed as a manifold in the Riemannian space [1], in which the parameters form the coordinate system on manifold and the distance measure is given by the Fisher information matrix (FIM) [2]. This framework reduces certain important information-theoretic problems to investigations of different Riemannian manifolds [3]. This perspective is helpful in analyzing many problems in engineering and sciences where probability distributions are used, including optimization [4], signal processing [5]

In particular, when the separation between the two points on the manifold is defined by Kullback-Leibler divergence (KLD) or relative entropy between two probability distributions p and q on a finite state space X={0,1,2,…,M}, i.e.,

then the resulting Riemmanian metric is defined by FIM [9]. This method of defining a Riemannian metric on statistical manifolds from a general divergence function is due to Eguchi [10]. Since FIM is the inverse of the well-known deterministic Cramér-Rao lower bound (CRLB), the information-geometric results are directly connected with those of estimation theory. Further, the relative entropy is related to the Shannon entropy H(p):=−∑x∈Xp(x)logp(x) by I(p,u)=log|X|−H(p), where u

is the uniform distribution on

It is, therefore, instructive to explore information-geometric frameworks for key estimation-theoretic results. For example, the Bayesian CRLB [11, 12]

is the analogous lower bound to CRLB for random variables. It assumes the parameters to be random with an

Recently, [14] studies information geometry of Rényi entropy [15], which is a generalization of Shannon entropy. In source coding problem where normalized cumulants of compressed lengths are considered instead of expected compressed lengths, Rényi entropy is used as a measure of uncertainty [16]. The Rényi entropy of p of order α, α≥0, α≠1, is defined to be Hα(p):=11−αlog∑xp(x)α. In the context of source distribution version of this problem, the Rényi analog of relative entropy is relative α-entropy [17, 18]. The relative α-entropy of p with respect to q (or Sundaresan’s divergence between p and q) is defined as

The Rényi entropy and relative α-entropy arise in several important information-theoretic problems such as guessing [22, 18, 23] and task encoding [24]. Relative α

[25], [26]. It also shares many interesting properties with relative entropy; see, e.g. [19, Sec. II] for a summary. For example, relative α-entropy behaves like squared Euclidean distance and satisfies a Pythagorean property in a similar way relative entropy does [19, 13]. This property helps in establishing a computation method [26] for a robust estimation procedure [27].

Motivated by such analogous relationships, our previous works [14] investigated the relative α-entropy from a differential geometric perspective. In particular, we applied Eguchi’s method with relative entropy as the divergence function to obtain the resulting statistical manifold with a general Riemannian metric. This metric is specified by the Fisher information matrix that is the inverse of the so called deterministic α-CRLB [19]. In this paper, we study the structure of statistical manifolds with respect to a relative α-entropy in a Bayesian setting. This is a non-trivial extension of our work in [13], where we proposed Riemmanian metric arising from the relative entropy for the Bayesian case. In the process, we derive a general Bayesian Cramér-Rao inequality and the resulting Bayesian α-CRLB which embed the compounded effects of both Rényi order α and Bayesian prior distribution. We show that, in limiting cases, the bound reduces to deterministic α-CRLB (in the absence of prior), Bayesian CRLB (when α→1) or CRLB (no priors and α→1).

The rest of the paper is organized as follows. In the next section, we provide the essential background to information geometry. We then introduce the definition of Bayesian relative α-entropy in Section III and show that it is a valid divergence function. In Section IV, we establish the connection between this divergence and the Riemannian metric and then derive the Bayesian α-version of Cramér-Rao inequality in Section V. Finally, we state our main result for the Bayesian α-CRLB in Section VI and conclude in Section VII.

A n-dimensional manifold is a Hausdorff and second countable topological space which is locally homeomorphic to Euclidean space of dimension n [2]. A Riemannian manifold is a real differentiable manifold in which the tangent space at each point is a finite dimensional Hilbert space and, therefore, equipped with an inner product. The collection of all these inner products is Riemannian metric. In information geometry, the statistical models play the role of a manifold and the Fisher information matrix and its various generalizations play the role of a Riemannian metric. The statistical manifold here means a parametric family of probability distributions S={pθ:θ∈Θ} with a continuously varying parameter space Θ (statistical model). The dimension of a statistical manifold is the dimension of the parameter space. For example, S={N(μ,σ2):μ∈R,σ2>0} is a two dimensional statistical manifold. The tangent space at a point of S is a linear space that corresponds to a “local linearization” at that point. The tangent space at a point p of S is denoted by T~p(S). The elements of T~p(S) are called tangent vectors of S at p. A Riemannian metric at point p of S

Let us restrict to statistical manifolds defined on a finite set X={a1,…,ad}. Let P:=P(X) denote the space of all probability distributions on X. Let S⊂P be a sub-manifold. Let θ=(θ1,…,θk) be a parameterization of S. By a divergence, we mean a non-negative function D defined on S×S such that D(p,q)=0 iff p=q. Given a divergence function on S, Eguchi [28] defines a Riemannian metric on S by the matrix

where gi,j is the elements in the ith row and jth column of the matrix G, θ=(θ1,…,θn), θ′=(θ′1,…,θ′n), and dual affine connections ∇(D) and ∇(D∗), with connection coefficients described by following Christoffel symbols

such that, ∇(D) and ∇(D∗) form a dualistic structure in the sense that

We now introduce relative α-entropy in the Bayesian case. Define S={pθ:θ=(θ1,…,θk)∈Θ} as a k-dimensional sub-manifold of P and

We present the following Lemma 1 which shows that our definition of Bayesian relative α-entropy is not only a valid divergence function but also coincides with the KLD as α→1.

1) Let α>1. Applying Holder’s inequality with Holder conjugates p=α and q=α/(α−1), we have

where ∥⋅∥ denotes α-norm. When α<1, the inequality is reversed. Hence

where the second inequality follows because, for x,y≥0,

The conditions of equality follow from the same in Holder’s inequality and logx≤x−1.

2) This follows by applying L’Hôpital rule to the first term of Iα:

and since Renyi entropy coincides with Shannon entropy as α→1. ∎

We now investigate the geometry of ~P with respect to the metric Gλα. Later, we formulate an α-equivalent version of the Cramér-Rao inequality associated with a submanifold ~S. Observe that ~P is a subset of R~X, where ~X:=X∪{ad+1}. The tangent space at every point of ~P is A0:={A∈R~X:∑x∈~XA(x)=0}. That is, T~p(~P)=A0. We denote a tangent vector (that is, elements of A0) by X(m). The manifold ~P can be recognized by its homeomorphic image {log~p:~p∈~P} under the mapping ~p↦log~p. Under this mapping the tangent vector X∈T~p(~P) can be represented X(e) which is defined by X(e)(x)=X(m)(x)/~p(x) and we define

Motivated by the expression for the Riemannian metric in (IV), define

Motivated by (V), the α-representation of a tangent vector X at p is

where the last equality follows because ~p(α)=p(α). The collection of all such α-representations is

Now the inner product between any two tangent vectors X,Y∈T~p(~P) defined by the α-information metric in (IV) is

Consider now an n-dimensional statistical manifold S, a submanifold of ~P, together with the metric G(α) as in (15). Let T∗~p(S) be the dual space (cotangent space) of the tangent space T~p(S) and let us consider for each Y∈T~p(S), the element ωY∈T∗~p(S) which maps X to ⟨X,Y⟩(α). The correspondence Y↦ωY is a linear map between T~p(S) and T∗~p(S). An inner product and a norm on T∗~p(S) are naturally inherited from T~p(S) by

Now, for a (smooth) real function f on S, the differential of f at p, (df)~p, is a member of T∗~p(S) which maps X to X(f). The gradient of f at p is the tangent vector corresponding to (df)~p, hence, satisfies

Since gradf is a tangent vector,

With these preliminaries, we now state our main results. These are analogous to those in [30, Sec. 2.5].