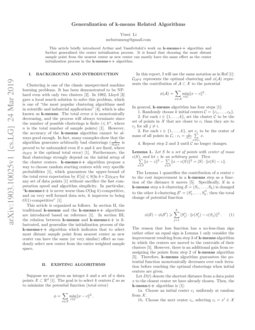 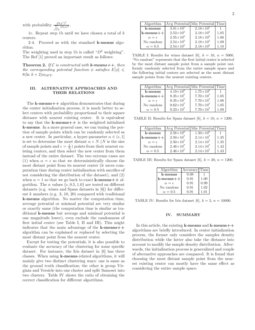 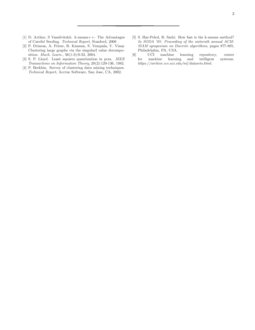 The Geodesic 2-center Problem in a Simple Polygon

K-means++ is an algorithm which is invented to improve the process of fi...
Maliheh Heydarpour Shahrezaei, et al. ∙

A Note On k-Means Probabilistic Poverty

It is proven, by example, that the version of k-means with random initia...
Mieczysław A. Kłopotek, et al. ∙

The Evolutionary Computation Methods No One Should Use

The center-bias (or zero-bias) operator has recently been identified as ...
Jakub Kúdela, et al. ∙

We propose a new algorithm for finding the center of a graph, as well as...
Frédéric Protin, et al. ∙

I Background and Introduction

Clustering is one of the classic unsupervised machine learning problems. It has been demonstrated to be NP-hard even with only two clusters

Drineas2004 . In 1982, Lloyd Lloyd1982 gave a local search solution to solve this problem, which is one of “the most popular clustering algorithms used in scientific and industrial applications” Berkhin2002 , which is also known as k-means. The total error ϕ is monotonically decreasing, and the process will always terminate since the number of possible clusterings is finite (⩽kn, where n is the total number of sample points) Arthur2006 . However, the accuracy of the k-means algorithm cannot be always good enough. In fact, many examples show that the algorithm generates arbitrarily bad clusterings (ϕϕOPT is proved to be unbounded even if n and k are fixed, where ϕOPT is the optimal total error) Arthur2006 . Furthermore, the final clusterings strongly depend on the initial setup of the cluster centers. k-means++

Arthur2006 , which guarantees the upper-bound of the total error expectation by E[ϕ]⩽8(ln k+2)ϕOPT for any set of data points Arthur2006 without sacrifice the fast computation speed and algorithm simplicity. In particular, “k-means++ is never worse than O(log k)-competitive, and on very well formed data sets, it improves to being O(1)-competitive” Arthur2006 .

This article is organized as follows. In section II, the traditional k-means and the k-means++ algorithms are introduced based on reference Arthur2006 . In section III, the relation between k-means and k-means++ is illustrated, and generalize the initialization process of the k-means++ algorithm which indicates that to select most distant sample point from nearest center as new center can have the same (or very similar) effect as randomly select new center from the entire weighted sample space.

Suppose we are given an integer k and a set of n data points X⊂Rd Arthur2006 . The goal is to select k centers C so as to minimize the potential function (total error)

In this report, I will use the same notation as in Ref Arthur2006 : COPT represents the optimal clustering and ϕ(A) represents the contribution of A⊂X to the potential

Let D(t) denote the shortest distance from a data point x to the closest center we have already chosen. Then, the k-mean++ algorithm is Arthur2006 : x   1a. Choose an initial center c1 uniformly at random from X. x   1b. Choose the next center ci, selecting ci=x′∈X with probability D(x′)2∑x∈XD(x)2. x   1c. Repeat step 1b until we have chosen a total of k centers. x   2-4. Proceed as with the standard k-means algorithm. The weighting used in step 1b is called “D2 weighting”. The Ref Arthur2006 proved an important result as follows:

If C is constructed with k-means++, then the corresponding potential function ϕ satisfies E[ϕ]⩽8(ln k+2)ϕOPT.

Iii Alternative Approaches and Their Relations

The k-means++ algorithm demonstrates that during the center initialization process, it is much better to select centers with probability proportional to their square distance with nearest existing center. It is equivalent to say that the k-means++ is the weighted initialized k-means. In a more general case, we can tuning the portion of sample points which can be randomly selected as a new center. In particular, a hyper-parameter α∈(ϵ,1] is set to determine the most distant α×N (N is the size of sample points and ϵ=1N) points from their nearest existing centers, and then select the new center from them instead of the entire dataset. The two extreme cases are (1) when α=ϵ so that we deterministically choose the most distant point from its nearest center (it saves computation time during center initialization with sacrifice of not considering the distribution of the dataset), and (2) when α=1 so that we go back to exact k-means++ algorithm. The α values {ϵ,0.5,1.0} are tested on different datasets (e.g. wines and Spam datasets in UCI ) for different k numbers (e.g. 3, 10, 20) compared with traditional k-means algorithm. No matter the computation time, average potential or minimal potential are very similar or exactly same (the computation time is similar as traditional k-means but average and minimal potential is one magnitude lower), even exclude the randomness of first initial center (see Table 1, 2 and 3). This might indicates that the main advantage of the k-means++ algorithm can be explained or replaced by selecting the most distant point from the nearest center.

Except for testing the potentials, it is also possible to evaluate the accuracy of the clustering for some specific dataset. For instance, the Iris dataset in UCI has three classes. When using k-means-related algorithms, it will mainly give two distinct clustering ways: one is same as the ground truth classification; the other is group Virginia and Versicle into one cluster and split Samoset into two clusters. Table 4 shows the ratio of obtaining the correct classification for different algorithms.

In this article, the existing k-means and k-means++ algorithms are briefly introduced. In center initialization process, the former only considers the samples density distribution while the latter also take the distance into account to modify the sample density distribution. Afterwards, the initialization process is generalized and couple of alternative approaches are compared. It is found that choosing the most distant sample point from the nearest existing center can mostly have the same effect as considering the entire sample space.