In practice, most of the optimization problems are non-linear requiring certain interactive solutions and approaches to model. In 5G Advanced and Beyond network slicing, mathematically modeling the users, type of service distributions and its adaptive SLAs are complex due to several dependencies. To facilitate the above, in this paper, we present novel Non-linear mathematical formulations and results that will form the base to achieve Optimized Scheduling. 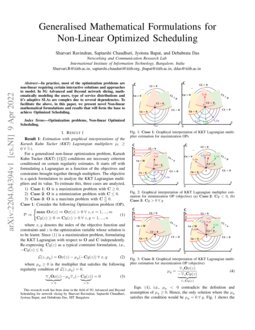 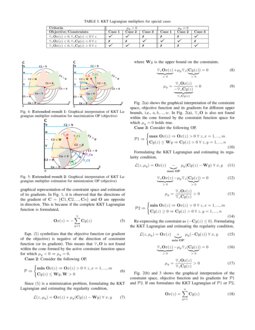 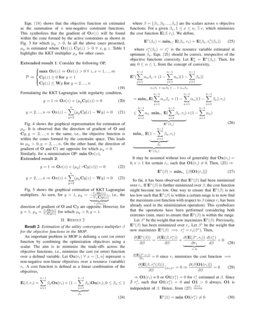 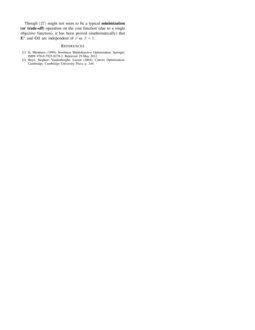 We present a number of novel algorithms, based on mathematical optimizat...
Mason Thammawichai, et al. ∙

Non-linear ICA based on Cramer-Wold metric

Explaining the data or explaining a model? Shapley values that uncover non-linear dependencies

An Experimental Comparison of Trust Region and Level Sets

For a generalized non-linear optimization problem, Karush Kuhn Tucker (KKT) [1][2] conditions are necessary criterion conditioned on certain regularity estimates. It starts off with formulating a Lagrangian as a function of the objectives and constraints brought together through multipliers. The objective is a quick formulation to analyze the KKT Lagrangian multipliers and its value. To estimate this, three cases are analyzed,

where x,y denotes the index of the objective function and constraints and z is the optimization variable whose solution is to be learnt. Since (1) is a maximization problem, formulating the KKT Lagrangian with respect to O and C independently. Re-expressing Cy(z) as a typical constraint formulation, i.e., −Cy(z)≤0,

where μy≥0 is the multiplier that satisfies the following regularity condition of L(z,μy)=0.

Eqn. (4), i.e., μy<0 contradicts the definition and assumption of μy≥0. Hence, the only solution where the μy satisfies the condition would be μy=0∀y. Fig. 1 shows the graphical representation of the constraint space and estimation of its gradients. In Fig. 1, it is observed that the directions of the gradient of C={C1,C2,...,Cn} and O are opposite in direction. This is because if the complete KKT Lagrangian function is formulated,

Since (5) is a minimization problem, formulating the KKT Lagrangian and estimating the regularity condition,

where Wy is the upper bound on the constraints.

Fig. 2(a) shows the graphical interpretation of the constraint space, objective function and its gradients for different upper bounds, i.e., a,b,...,w. In Fig. 2(a), ▽zO is also not found within the cone formed by the constraint function space for which μy=0 holds true.

Formulating the KKT Lagrangian and estimating its regularity condition,

Re-expressing the constraint as (−Cy(z)≤0). Formulating the KKT Lagrangian and estimating the regularity condition,

Fig. 2(b) and 3 shows the graphical interpretation of the constraint space, objective function and its gradients for P1 and P2. If one formulates the KKT Lagrangian of P1 or P2,

Eqn. (18) shows that the objective function sis estimated as the summation of n non-negative constraint functions. This symbolizes that the gradient of Ox(z) will be found within the cone formed by the active constraints as shown in Fig. 3 for which μy>0. In all the above cases presented, μy is estimated where Ox(z),Cy(z)>0 ∀x,y,z. Table I highlights the KKT multiplier μy for other cases. Extendedresult1: Consider the following OP,

Fig. 4 shows the graphical representation for estimation of μy. It is observed that the direction of gradient of O and Cy,y=2,...,n is the same, i.e., the objective function is within the cones formed by the constraint space. This leads to μy>0,y=2,...,n. On the other hand, the direction of gradient of O and C1 are opposite for which μy=0. Similarly, for a minimization OP: minOx(z), Extendedresult2:

Fig. 5 shows the graphical estimation of KKT Lagrangian multipliers. As seen, for y>1, μy=▽zOx(z)−▽zCy(z)▽zCy(z), i.e., the direction of gradient of O and Cy are opposite. However, for y=1, μy=▽zOx(z)▽zCy(z) for which μy>0,y=1.

Result 2: Estimation of the utility convergance multiplier β for the objective functions in the MOP.

An important problem in MOP is defining a cost (or error) function by combining the optimization objectives using a scalar. The aim is to minimize the trade-offs across the objective functions, i.e., minimize the cost (or error) function over a defined variable. Let Ox(ri) ∀x=[1,n] represent n non-negative non-linear objectives over a resource (variable) ri. A cost function is defined as a linear combination of the objectives,

where β={β1,β2,...,βn} are the scalars across n objective functions. For a given βx,1≤x≤n, ∃ri which minimizes the cost function E(β,ri). We define,

Though (27) might not seem to be a typical minimization (or trade-off) operation on the cost function (due to a single objective function), it has been proved (mathematically) that E∗ and O1 are independent of β as β=1.