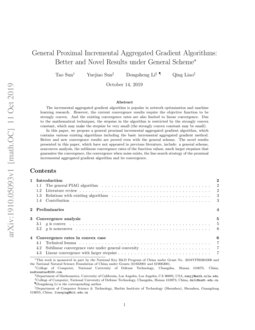 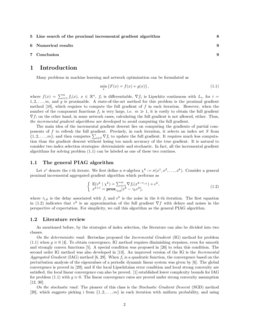 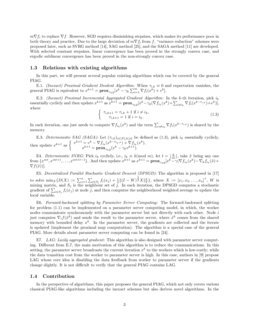 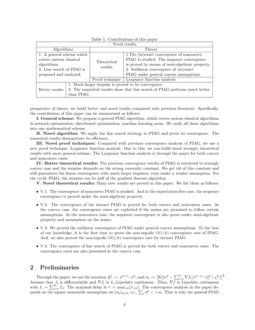 On the complexity of convex inertial proximal algorithms

In this work we introduce a new optimisation method called SAGA in the s...
Aaron Defazio, et al. ∙

On the Proximal Gradient Algorithm with Alternated Inertia

In this paper, we investigate the attractive properties of the proximal ...
Franck Iutzeler, et al. ∙

We propose a new algorithm for finite sum optimization which we call the...
Hoi-To Wai, et al. ∙

where f(x)=∑mi=1fi(x), x∈Rn, fi is differentiable, ∇fi is Lipschitz continuous with Li, for i=1,2,…,m, and g is proximable. A state-of-the-art method for this problem is the proximal gradient method [10], which requires to compute the full gradient of f in each iteration. However, when the number of the component functions fi is very large, i.e. m≫1, it is costly to obtain the full gradient ∇f; on the other hand, in some network cases, calculating the full gradient is not allowed, either. Thus, the incremental gradient algorithms are developed to avoid computing the full gradient.

The main idea of the incremental gradient descent lies on computing the gradients of partial components of f to refresh the full gradient. Precisely, in each iteration, it selects an index set S from {1,2,…,m}; and then computes ∑i∈S∇fi to update the full gradient. It requires much less computation than the gradient descent without losing too much accuracy of the true gradient. It is natural to consider two index selection strategies: deterministic and stochastic. In fact, all the incremental gradient algorithms for solving problem (1.1) can be labeled as one of these two routines.

where τi,k is the delay associated with fi and ek is the noise in the k-th iteration. The first equation in (1.2) indicates that vk is an approximation of the full gradient ∇f with delays and noises in the perspective of expectation. For simplicity, we call this algorithm as the general PIAG algorithm.

As mentioned before, by the strategies of index selection, the literature can also be divided into two classes.

On the deterministic road: Bertsekas proposed the Incremental Gradient (IG) method for problem (1.1) when g≡0 [4]. To obtain convergence, IG method requires diminishing stepsizes, even for smooth and strongly convex functions [5]. A special condition was proposed in [26] to relax this condition. The second order IG method was also developed in [13]. An improved version of the IG is the Incremental Aggregated Gradient (IAG) method [6, 29]. When fi

is a quadratic function, the convergence based on the perturbation analysis of the eigenvalues of a periodic dynamic linear system was given by

On the stochastic road: The pioneer of this class is the Stochastic Gradient Descent (SGD) method [20], which suggests picking i from {1,2,…,m}

in each iteration with uniform probability, and using

m∇fi to replace ∇f. However, SGD requires diminishing stepsizes, which makes its performance poor in both theory and practice. Due to the large deviation of m∇fi from f

, “variance reduction” schemes were proposed later, such as SVRG method

In this part, we will present several popular existing algorithms which can be covered by the general PIAG.

In each iteration, one just needs to compute ∇fik(xk) and the term ∑i≠ik∇fi(xk−τi,k) is shared by the memory.

E5. Decentralized Parallel Stochastic Gradient Descent (DPSGD): The algorithm is proposed in [17] to solve minX{D(X):=∑nj=1∑i∈Sjfi(xj)+12∥(I−W)12X∥2F}, where X:=[x1,x2,…,xn]⊤, W is mixing matrix, and Sj is the neighbour set of j. In each iteration, the DPSGD computes a stochastic gradient of ∑i∈Sjfi(xj) at node j, and then computes the neighborhood weighted average to update the local variable.

II. Novel algorithm: We apply the line search strategy to PIAG and prove its convergence. The numerical results demonstrate its efficiency.

IV. Better theoretical results: The previous convergence results of PIAG is restricted to strongly convex case and the stepsize depends on the strong convexity constant. We get rid of this constant and still guarantees the linear convergence with much larger stepsizes, even under a weaker assumption. For the cyclic PIAG, the stepsize can be half of the gradient descent algorithm.

V. Novel theoretical results: Many new results are proved in this paper. We list them as follows:

Through the paper, we use the notation Δk:=xk+1−xk, and σk:=[E(∥vk−∑mi=1∇fi(xk−τi,k)∥2∣χk)]12. Assume that fi is differentiable and ∇fi is Li-Lipschitz continuous. Then, ∇f is Lipschitz continuous with L:=∑mi=1Li. The maximal delay is τ:=maxi,k{τi,k}. The convergence analysis in the paper depends on the square summable assumption on (σk)k≥0, i.e., ∑iσ2i<+∞. That is why the general PIAG just contains deterministic SAGA and SVRG, in which case σk≡0. However, the SAGA and SVRG may not have the summable assumption held. In the deterministic case, σk=∥ek∥, according to the general PIAG we defined in (1.2). Then we only need ∑i∥ei∥2<+∞. Further, if the noise vanishes, the assumption certainly holds. Besides the deterministic case we discussed above, the stochastic coordinate descent algorithm (with asynchronous parallel) can also satisfy this assumption. Taking the stochastic coordinate descent algorithm for example, in this algorithm, σ2k=N−1NE∥∇f(xk)∥2=(N−1)E∥Δk∥2. In the stochastic coordinate descent algorithm, it is easy to prove ∑iE∥Δ∥2<+∞ if the stepsize is well chosen. For the asynchronous parallel algorithm, by assuming the independence between ^xk with ik, we can prove the same result given in [Lemma 1, [27]]. We introduce the definitions of subdifferentials. The details can be found in [19, 22, 23].

Let J:RN→(−∞,+∞] be a proper and lower semicontinuous function. The subdifferential, of J at x∈RN, written as ∂J(x), is defined as

The analysis in this section is heavily based on the following Lyapunov function:

where ε,δ>0 will be determined later, based on the step size γ and τ (the bound for τi,k). We discuss the convergence when g (the regularized function in (1.1)) is convex or nonconvex separately. The main difference of the two cases is the upper bound of the stepsize. Due to the convexity of g, the upper bound of the stepsize in the first case is twice as the second one.

When g is convex, we consider three different types of convergence: the first one is in the perspective of expectation, the second one is about almost surely convergence, while the last one considers the semi-algebraic property[18, 15, 7].

Convergence in the perspective of expectation:

Let f be a function (may be nonconvex) with L-Lipschitz gradient and g is convex, and finite minF. Let (xk)k≥0 be generated by the general PIAG, and maxi,k{τi,k}≤τ, and ∑iσ2i<+∞. Choose the step size γk≡γ=2c(2τ+1)L for arbitrary fixed 0<c<1. Then we can choose ε,δ>0 to obtain

With the Lipschitz continuity of f, we are prepared to present the convergence result.

where we assume τ≥1 and

A lemma on nonnegative almost supermartingales [21], whose details are included in the appendix, is needed to prove the almost sure convergence.

Assume the conditions of Lemma 1 hold, and F satisfies the semi-algebraic property, and (xk)k≥0 is generated by (in)exact PIAG, and ∥ek∥∼O(1kη) (η>1), then, (xk)k≥0 converges to a critical point of F.

Assume the conditions of Theorem 1 hold except that g is nonconvex and γk≡γ=c(2τ+1)L for arbitrary fixed 0<c<1. Then, we have limkE[\emphdist(0,∂F(xk))]=0.

Assume the conditions of Proposition 1 hold, then, we have \emphdist(0,∂F(xk))→0,a.s.

Assume the conditions of Theorem 3 hold except that g is nonconvex and γk≡γ=c(2τ+1)L for arbitrary fixed 0<c<1, then, (xk)k≥0 converges to a critical point of F.

In this part, we prove the sublinear convergence rates of the general proximal incremental aggregated gradient algorithm under general convex case, i.e., both f and g are convex. The analysis in the part uses a slightly modified Lyapunov function

This part presents a technique lemma. The sublinear and linear convergence results are both derived from this lemma.

Assume the gradient of f is Lipschitz with L and g is convex. Choose the step size γk≡γ=2c(2τ+1)L for arbitrary fixed 0<c<1. For any positive sequence (ϕk)k≥0 satisfying σk√2≤ϕk,∑+∞i=kϕ2i≤Dϕ2k, for some D>0. Let ¯¯¯¯¯xk denote the projection of xk to argminF, assumed to exist, and let

Then, there exist ε,δ>0 such that:

In this subsection, we present the sublinear convergence of the general proximal incremental aggregated gradient algorithm.

Assume the gradient of f is Lipschitz continuous with L and g is convex, and proxg(⋅) is bounded. Choose the step size γk≡γ=2c(2τ+1)L for arbitrary fixed 0<c<1. Let (xk)k≥0 be generated by the general proximal incremental aggregated gradient algorithm. And the σk∼O(ζk), where 0<ζ<1. Then, we have

In many cases, proxg(⋅) may be unbounded. However, we can slightly modified the algorithm. For example, in the LASSO problem

To the best of our knowledge, this is the first time to prove the sublinear convergence rate for the proximal incremental aggregated gradient algorithm.

Assume that the function F satisfies the following condition

where ¯¯¯x is the projection of x to the set argminF, and ν>0. This property is weaker than the strongly convexity. If F is further differentiable, condition (4.5) is equivalent to the restricted strongly convexity [16].

Compared with the existing linear convergence results in [30, 12], our theoretical findings enjoys two advantages: 1. we generalize the strong convexity to a much weaker condition (4.5); 2. the stepsize gets rid of the parameter ν which promises larger descent of the algorithm when ν is small.

In this part, we consider a line search version of the deterministic proximal incremental gradient algorithm. First, we set γk≡c(2τ+1)L if g is nonconvex, and γk≡2c(2τ+1)L if g is convex. The scheme of the algorithm can be presented as follows: Step 1 Compute the point vk=∑mi=1∇fi(xk−τi,k). Step 2 Find jk as the smallest integer number j which obeys that yk=proxηjkc1g[xk−ηjkc1vk]. and ⟨vk,yk−xk⟩+g(yk)−g(xk)≤−c22∥yk−xk∥2 where 0<η<1 and c1,c2>0 the parameters. Set ηk=ηjkc1 if ηk≥γ and ηk=γ if else. The point xk+1 is generated by xk+1=proxηkg[xk−ηkvk].

Let f be a function (may be nonconvex) with L-Lipschitz gradient and g is nonconvex, and finite minF. Let (xk)k≥0 be generated by the proximal incremental aggregated gradient algorithm with line search, and maxi,k{τi,k}≤τ. Choose the parameter c2≥(2τ+1)Lc and 0<c<1. It then holds that limk\emphdist(0,∂F(xk))=0.

In fact, we can also derive the convergence rate for the line search version in the convex case. The proof is very similar to the one in Section 4. Thus, we just present the sketch. Like the previous analysis, a modified Lyapunov function is needed Fk(ε):=F(xk)+~κ⋅∑k−1d=k−τ(d−(k−τ)+1)∥Δd∥22−minF, where ~κ:=L2ε+1−c8cτ(L+2τL). With this Lyapunov function and suitable ε, we prove the following two inequalities

Let f be a convex function with L-Lipschitz gradient and g is convex, and finite minF. Let (xk)k≥0 be generated by the proximal incremental aggregated gradient algorithm with line search, and maxi,k{τi,k}≤τ. Choose the parameter c2≥(2τ+1)L2c and 0<c<1. Then, there exist ε>0 such that:

Now we use some numerical experiments to show how the line search strategy can accelerate the PIAG algorithms. Here we considered the following two updating rules,

. We tested binary classifiers on MNIST, ijcnn1. To include all convex and nonconvex cases, we choose logistic regression (convex) and squared logistic loss (nonconvex) for

f, ℓ1 regularization (convex) and MCP (nonconvex) for g. The results when using scheme I and II with and without line search are shown in Figure 6. In our experiments, we choose γ=2c(2τ+1)L when g is convex and c(2τ+1)L when g is nonconvex, c=0.99, c2=1γ.Our numerical results shows that the line search strategy can speed up the PIAG algorithm a lot.

In this paper, we consider a general proximal incremental aggregated gradient algorithm and prove several novel results. Much better results are proved under more general conditions. The core of the analysis is using the Lyapunov function analysis. We also consider the line search of proximal incremental aggregated gradient algorithm and the convergence rate is proved.