Computing moments of various parameter estimators related to an autoregressive model of Statistics, one needs to evaluate several non-trivial limits. This was done by arXiv:1506.03131 for the case of two, three and four dimensions; in this article, we present a proof of a fully general formula, based on an ingenious solution of https://mathoverflow.net/users/4312/fedor-petrov. 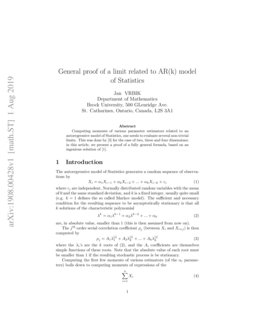 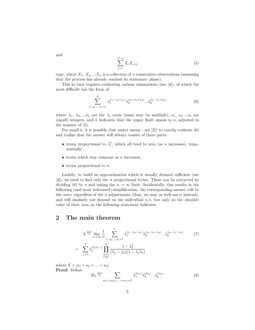 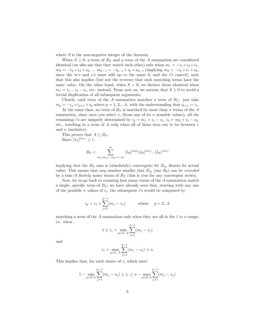 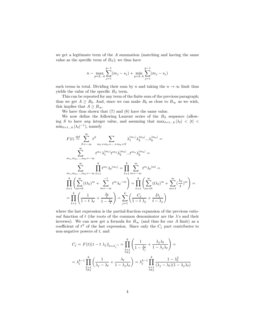 We show that if a permutation statistic can be written as a linear combi...
Stoyan Dimitrov, et al. ∙

A Tutorial on Multivariate k-Statistics and their Computation

are independent, Normally distributed random variables with the mean of

and the same standard deviation, and

k is a fixed integer, usually quite small (e.g. k=1

defines the so called Markov model). The sufficient and necessary condition for the resulting sequence to be asymptotically stationary is that all

k solutions of the characteristic polynomial

are, in absolute value, smaller than 1 (this is then assumed from now on).

where the λi’s are the k roots of (2), and the Ai coefficients are themselves simple functions of these roots. Note that the absolute value of each root must be smaller than 1 if the resulting stochastic process is be stationary.

type, where X1, X2,...Xn is a collection of n consecutive observations (assuming that the process has already reached its stationary phase).

This in turn requires evaluating various summations (see [4]), of which the most difficult has the form of

For small k, it is possible (but rather messy - see [2]) to exactly evaluate (6) and realize that the answer will always consist of three parts:

Luckily, to build an approximation which is usually deemed sufficient (see [4]), we need to find only the n proportional terms. These can be extracted by dividing (6) by n and taking the n→∞ limit. Incidentally, this results in the following (and most welcomed) simplification: the corresponding answer will be the same regardless of the ~n adjustments (thus, we may as well use n instead), and will similarly not depend on the individual si’s, but only on the absolute value of their sum, as the following statement indicates.

where S is the non-negative integer of the theorem.

When S≥0, a term of BS and a term of the A summation are considered identical (we also say that they match each other) only when m1=−i1+i2+s1, m2=−i2+i3+s2, … mk−1=−ik−1+ik+sk−1 (implying mk=−ik+i1+sk, since the m’s and s’s must add up to the same S, and the ´ı’s cancel); note that this also implies (but not the reverse) that such matching terms have the same value. On the other hand, when S<0, we declare them identical when m1=i1−i2−s1, etc. instead. From now on, we assume that S≥0 to avoid a trivial duplication of all subsequent arguments.

At the same time, no term of BS is matched by more than n terms of the A summation, since once you select i1 (from any of its n possible values), all the remaining i’s are uniquely determined by i2=m1+i1−s1, i3=m2+i2−s2, etc., resulting in a term of A only when all of these turn out to be between 1 and n (inclusive).

implying that the BS sum is (absolutely) convergent; let B∞ denote its actual value. This means that any number smaller that B∞ (say B0) can be exceeded by a sum of finitely many terms of BS (this is true for any convergent series).

Now, let us go back to counting how many terms of the A summation match a single, specific term of BS; we have already seen that, starting with any one of the possible n values of i1, the subsequent i’s would be computed by

matching a term of the A summation only when they are all in the 1 to n range, i.e. when

This implies that, for each choice of i1 which meet

we get a legitimate term of the A summation (matching and having the same value as the specific term of BS); we thus have

such terms in total. Dividing their sum by n and taking the n→∞ limit thus yields the value of the specific BS term.

This can be repeated for any term of the finite sum of the previous paragraph; thus we get A≥B0. And, since we can make B0 as close to B∞ as we wish, this implies that A≥B∞.

We now define the following Laurent series of the BS sequence (allowing S to have any integer value, and assuming that maxℓ=1...k|λℓ|<|t|<minℓ=1...k|λℓ|−1), namely

where the last expression is the partial-fraction expansion of the previous rational function of t (the roots of the common denominator are the λ’s and their inverses). We can now get a formula for B∞ (and thus for our A limit) as a coefficient of tS of the last expression. Since only the Cj part contributes to non-negative powers of t, and

the final formula is therefore given by

This proves the original statement.

The formula of (2) then enables us to evaluate all the expected values needed to deal with any autoregressive model of type (1). Note that in some cases the set of λi values may consist of only a subset of of roots of (2); this only reduces the value of k and makes the result that much easier.

A modification of the formula is needed when some of the λi’s are identical; in that case all we have to do is to evaluate the formula’s corresponding limit, such as λ5→λ2 when the two λ’s have the same value (in the case of triple roots, we would need to take two consecutive limits, etc.). This yields a multitude of new (and rather messy) formulas not worth quoting - suffices to say that they all result (as they must) in a finite expression.

A further challenge would be to find the constant part of (6).