The variational autoencoder (VAE) is a generative model with continuous latent variables where a pair of probabilistic encoder (bottom-up) and decoder (top-down) is jointly learned by stochastic gradient variational Bayes. We first elaborate Gaussian VAE, approximating the local covariance matrix of the decoder as an outer product of the principal direction at a position determined by a sample drawn from Gaussian distribution. We show that this model, referred to as VAE-ROC, better captures the data manifold, compared to the standard Gaussian VAE where independent multivariate Gaussian was used to model the decoder. Then we extend the VAE-ROC to handle mixed categorical and continuous data. To this end, we employ Gaussian copula to model the local dependency in mixed categorical and continuous data, leading to Gaussian copula variational autoencoder (GCVAE). As in VAE-ROC, we use the rank-one approximation for the covariance in the Gaussian copula, to capture the local dependency structure in the mixed data. Experiments on various datasets demonstrate the useful behaviour of VAE-ROC and GCVAE, compared to the standard VAE. 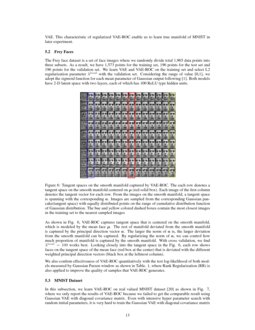 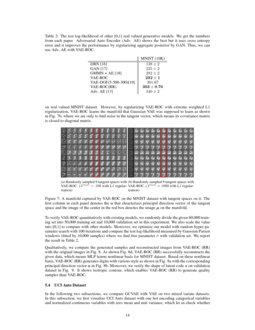 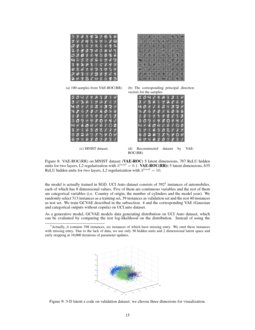 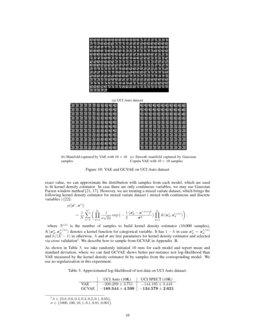 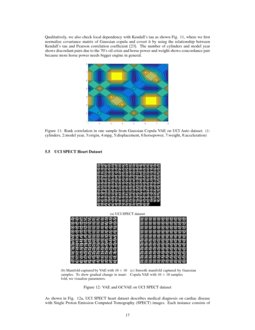 On the Encoder-Decoder Incompatibility in Variational Text Modeling and Beyond

Constructing the Matrix Multilayer Perceptron and its Application to the VAE

is a deep probabilistic model with great popularity, where a top-down probabilistic decoder is paired with a bottom-up probabilistic encoder that is designed to approximate the posterior inference over continuous latent variables. When the VAE is applied to a certain task in practice, the first thing to be determined is to assign a right probability distribution to each dimension of the input data. For example, we assign multivariate Gaussian distribution to real-valued attributes or independent Bernoulli distribution to each binary attribute of the input data. This is a critical but cumbersome step to successfully train a VAE on a dataset in practical applications.

The Gaussian VAE makes assumption that the probabilistic decoder is modelled as multivariate Gaussian distribution with diagonal covariance matrix. In such a case, it was observed that the Gaussian VAE was not successful in capturing a fruitful representation of real-valued MNIST dataset. This enforces us to binarize the data, followed by training the Bernoulli VAE on. In other words, the independent multivariate Gaussian assumption on the decoder in the Gaussian VAE limits its capability to capture the data manifold. To this end, we extends the Gaussian VAE, approximating the local covariance matrix of the decoder as an outer product of the principal direction at a position determined by a sample drawn from Gaussian distribution. A closely-related work is the nonlocal estimation of manifold structure

[2] where local manifold structure is determined by modelling linear tangent space as a nonlinear function (for instance, MLP) of data, which can model smoothly changing tangent spaces. While this work chooses the membership of tangent space with k-NN, our model chooses its membership by setting local dependency as a function of latent variables, which is efficiently inferred by the recognition network. We show that this model, referred to as VAE-ROC, better captures the data manifold, compared to the standard Gaussian VAE where independent multivariate Gaussian was used to model the decoder.

We extends this idea to model tangent space on mixed variate data using copula. Copula is a way of modeling multivariate distribution from bottom-up way. Specifically, we can model it with two steps: (1) modelling marginal distribution for each input dimension. (2) modeling dependency structure among them with copula [3]

First, in earlier days, Everitt introduced a latent Guassian variable for each categorical variable and model them with observed continuous variables in form of multivariate Normal distribution

[4]. Hoff proposed extended rank likelihood for mixed variate data, where it ignores the form of margins by calculating likelihood of a set of projected rank preserved data on unit hypercube [5]. Continuous Extension (CE) is a way of incorporating discrete variable into copula by introducing jittered uniform variable to a discrete variable [6]. In GCVAE, we follows the idea of simulated likelihood by margin out jittered uniform variable with one sample [7]. GCVAE cannot use extended rank likelihood because it models copula as well as marginal distributions.

In this paper we address two issues on the VAE: (1) better representation learning by capturing local principal directions at different positions which vary along the data manifold; (2) managing mixed continuous and discrete data in practice.

where mean vector μ and diagonal covariance matrix \boldmathΛσ=diag(\boldmathσ2) with \boldmathσ2=[σ21,…,σ2D]⊤ are computed by MLPs:

The encoder of Gaussian VAE is described by

where \boldmathΛτ=diag(\boldmathτ2) and parameters are also computed by MLPs:

The set of parameters, ϕ, for the encoder, is given by

where the single factor of the marginal log-likelihood, logpθ(\boldmathx(n)), is described by its variational lower-bound:

The variational lower-bound, F(θ,ϕ;\boldmathx(n)), on the marginal log-likelihood of observation \boldmathx(n) is given by

where KL[q∥p] is the KL-divergence between the distributions q and p. The second term in (5) is analytically computed and the first term is calculated by the stochastic gradient variational Bayes (SGVB) where the Monte Carlo estimates are performed with the reparameterization trick:

where \boldmathz(n,l)=\boldmathη(\boldmathx(n))+\boldmathτ(\boldmathx(n))⊙\boldmathϵ(l) (⊙ represents the elementwise product) and \boldmathϵ(l)∼N(0,\boldmathI). A single sample is often sufficient to form this Monte Carlo estimates in practice, thus, in this paper we simply use

where \boldmathz(n)=\boldmathη(\boldmathx(n))+\boldmathτ(\boldmathx(n))⊙\boldmathϵ denotes a single sample with abuse of notation.

If all Fi are continuous, then the copula satisfying (6) is unique and is given by

) can also be represented in terms of the joint probability density function (PDF),

The Gaussian copula with covariance matrix \boldmathΣ∈RD×D, that we consider in this paper, is given by

where ΦΣ(⋅|\boldmathΣ) is the D-dimensional Gaussian CDF with covariance matrix Σ with diagonal entries being equal to one and Φ(⋅) is the univariate standard Gaussian CDF. The Gaussian copula density is given by

where \boldmathq=[q1,…,qD]⊤ with normal scores qi=Φ−1(ui) for i=1,…,D. Invoking (8) with this Gaussian copula density, the joint density function is written as:

If xi’s are discrete, the copula CΦ(u1,…,uD) are uniquely determined on the range of F1×⋯×FD. In such a case, the joint probability mass function (PMF) of x1,…,xD is given by

where ui,1=Fi(x−i), the limit of Fi(⋅) at xi from the left, and ui,2=Fi(xi). The PMF requires the evaluation of 2D terms, which is not manageable even for a moderate value of D (for instance, D≥5

x∗i=xi−vi with the integer-valued xi, where vi is uniform on [0,1] and is independent of xi as well as of ρj for j≠i. Continuous random variables x∗i produced by jittering xi yields the CDF and PDF given by

where [ξ] represents the nearest integer less than or equal to ξ. The joint PDF for jittered variables x∗i is determined by substituting F∗i and p∗i into (9). Then, averaging this joint PDF over the jitters \boldmathv=[v1,…,vD]⊤ lead to the joint PFM for x1,…,xD:

Given a set of N data points \boldmathx(n), in the case of Gaussian copula, the log-likelihood is given by invoking (8) and (9)

Denote by ϑi the parameters that involve specifying the marginal PDF pi(⋅). Then the parameters {ϑi} and Σ appearing in the Gaussian copula density are estimated by the two-step method, known as inference for margin [12]:

We describe our model VAE-ROC in the perspective of manifold learning, making a simple modification in the Gaussian VAE described in Section 2.1. Note that VAE-ROC is limited to continuous data only and its extension to mixed-data is presented in Section 4

As in VAE, VAE-ROC also constitutes a pair of probabilistic decoder and encoder. The probabilistic encoder in VAE-ROC is the same as (2.1) but the decoder is slightly different from the VAE, which is described below in detail. In order to find the local principal direction at a specific location \boldmathμ(\boldmathz), we use the following model for the probabilistic decoder

where the local covariance matrix is of the form ω\boldmathI+\boldmatha\boldmatha⊤ and each of \boldmathμ,ω,\boldmatha is parameterized by an individual MLP which takes z as input. For instance,

In fact, VAE-ROC, can be viewed as an infinite mixture of probabilistic principal component analyzers. Introducing a dummy Gaussian latent variable s∼N(0,1), the probability distribution over x given s and z is given by

The latent variable z can be viewed as an indicator variable involving a local region to be approximated by a tangent plane.. However, it is not a discrete variable unlike the standard finite mixture model. The variable z is drawn from the standard multivariate Gaussian distribution and \boldmathμ(\boldmathz)=MLPμ(\boldmathz) determines a location where we approximate the local manifold structure as local principal direction a. Besides this subtle difference, it can be viewed as the mixture of probabilistic principal component analyzers. Marginalizing s out yields the distribution for the decoder of VAE-ROC, given in (11).

Given a training dataset \boldmathX=[\boldmathx(1),…,\boldmathx(n)] consisting of N i.i.d. observations, each of which is a D-dimensional random vector, the variational lower-bound on the marginal log-likelihood of X is given by

where the superscript (n) is used for ηk and τk to reflect their dependence on \boldmathx(n). The first term in (13) is calculated by the stochastic gradient variational Bayes (SGVB) where the Monte Carlo estimates are performed with the reparameterization trick [1]:

where \boldmathz(n,l)=\boldmathη(n)+\boldmathτ% (n)⊙\boldmathϵ(l) (⊙ represents the elementwise product) and \boldmathϵ(l)∼N(0,\boldmathI). A single sample is often sufficient to form this Monte Carlo estimates in practice, thus, in this paper we simply use

Denote by \boldmathXM={\boldmathx(m)}Mm=1 is a minibatch of size M, which consists of M randomly drawn samples from the full dataset X with N points. Then an estimator of the variational lower-bound is constructed by

With the maximization of the variational lower-bound, we consider two regularization terms, each of which is explained below:

Thus our regularized variational lower-bound is given by

With the random minibatch \boldmathXM of M datapoints, this regularized variational lower-bound in (16) is maximized to determine parameters θ and ϕ. This training is repeated with different minibatches until the convergence of parameters is achieved.

In this section we present a Gaussian copula variational autoencoder (GCVAE) where we extend the VAE-ROC (described in the previous section) developed for continuous data to handle mixed continuous and discrete data, employing Gaussian copula explained in Section 2.2.

where βi,j=P(xsi=j) and I(⋅) is the indicator function which yields 1 when the input argument is true and otherwise 0.

In GCVAE, we use the Gaussian copula to model the probabilistic decoder pθ(\boldmathx|\boldmathz), given by

where the expectation is approximated using a single sample drawn from the uniform distribution on [0,1] and the Gaussian copula density (see Appendix A for proof) is given by

As in the VAE-ROC, each of \boldmathμ,\boldmathσ2,\boldmatha,ω,\boldmathβ is parameterized by an individual MLP which takes z as input. For instances,

The probabilistic encoder qϕ(\boldmathz|\boldmathx) is parameterized, as in VAE or VAE-ROC, as described in (3) and (2.1). As in VAE-ROC, GCVAE is learned by maximizing the reqularized variational lower-bound (16), where the lower-bound is given by